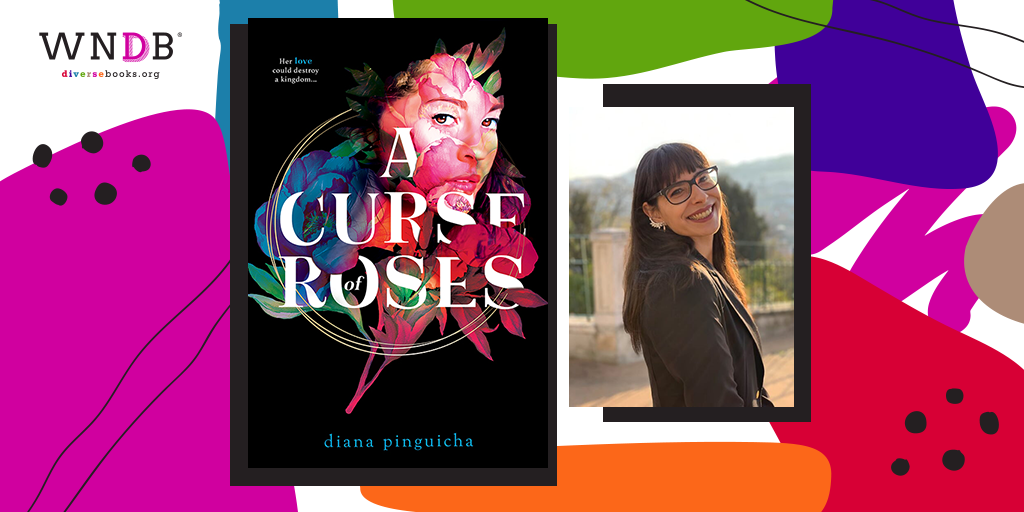 Diana Pinguicha, the debut author of the December 1, 2020 release A Curse of Roses, said she writes not just because it’s a career, but because it’s something she genuinely enjoys.

“It’s one of the things I legitimately enjoy doing,” she told We Need Diverse Books. “I will never get tired of sitting down and writing things.”

But that’s not the only reason she writes. It’s also an action that helps her, she said.

“But also I have ADHD so I have a lot of things going in my head all at once, and I find that writing a story down is a way to clean my head of it, sort of,” she added. “I like writing, and it helps my brain function a little better.”

Pinguicha’s debut is based on the Portuguese version of the Miracle of the Roses and is an #OwnVoices historical fantasy in which Yzabel, betrothed to the king of Portugal, is cursed so any food she touches turns to flowers. In order to break the curse, she must kiss Fatyan, which of course poses complications as she is betrothed to the King.

“I started thinking of experiences that were unique to me and not so much to the rest of the world,” Pinguicha said, recalling her inspiration for A Curse of Roses. At the time, she had an agent and a previous novel that had not sold on submission, so she began looking for other stories to tell.

“One of the stories I really liked was Isabel’s story, about turning roses into bread and bread into roses, and it was in my hometown so I was like ‘who else is going to write this if not me?’” Pinguicha said. “And if someone else was going to write it, well, I wanted to get there first.”

In addition, she said, “I wanted to write a book that was just about soft and sweet people just wanting each other to be happy. Because the world is just such a shit show right now. And I wanted to show that being a lesbian is nothing wrong, even if you’re highly religious, which I am not so I had to channel a lot of my early years.”

Pinguicha conducted a lot of research for this book, a process she touched upon in a blog post on her website entitled Researching Your Own Culture.

She shared with me that one thing she learned throughout the process was that it’s always valuable to sit down and do the research, no matter how much you may already know.

“Do your research—even if you think you know it, go down that hole,” she recommended. “[History] should not be taught the way it is, in that Portuguese people were heroes of the sea and we did good things when we colonized Brazil. We did not. [We] started global slave trafficking all on our own. We don’t get enough shit about that, we should get more shit about that.”

Pinguicha is a Portuguese author who is aware that she’s writing books that will be consumed in large part by an American audience who may not be familiar with Portuguese culture.

However, she chose not to interrupt the story and explain her culture, pointing out that Americans, whose books are read by a wide audience of international as well as domestic readers, don’t do that either.

The process of getting A Curse of Roses published was, Pinguicha said, really hard. She explained that she queried the book, sending it out to agents in the hopes one would represent her, for six to seven months, and got multiple full requests.

“And then no one wanted to take me,” she said. “And that was really sad. There was a lot of depression, and a lot of just shitty rejections from agents.”

Ultimately, her book was scouted by one of her editors at Entangled Teen, offering to give her feedback at the very least.

That, of course, turned into the offer of publication for her debut.

In that vein, Pinguicha offered a word of advice (well, two, really) to aspiring authors: The first is to never give up.

“But I know it’s hard, especially when it feels like the entire world is against you,” she added. “So I’ll use another one, which is it’s okay to take a break, it’s okay to stop for a little while and recharge your creative energies and your spoons and whatever you may need—it’s fine to wait. It’s not like a sprint. It’s a marathon.”

She suggested playing video games as a way of recharging and taking a break. Another great break is to read books, and on that note, Pinguicha had some great recommendations.

“Have you heard about our Lord and Savior Bree Matthews of Legendborn yet — oh my God, right?” she said, hyping up Tracy Deonn’s YA fantasy debut and adding, “People have been sliding into my DMs to tell me they’re upset with me because the book is so good and now they don’t know how to deal.”

Another book Pinguicha heartily recommended is These Violent Delights by Chloe Gong, saying “Oh my god the writing. It’s just so good. And Juliette! I’ve just been reading great books.”