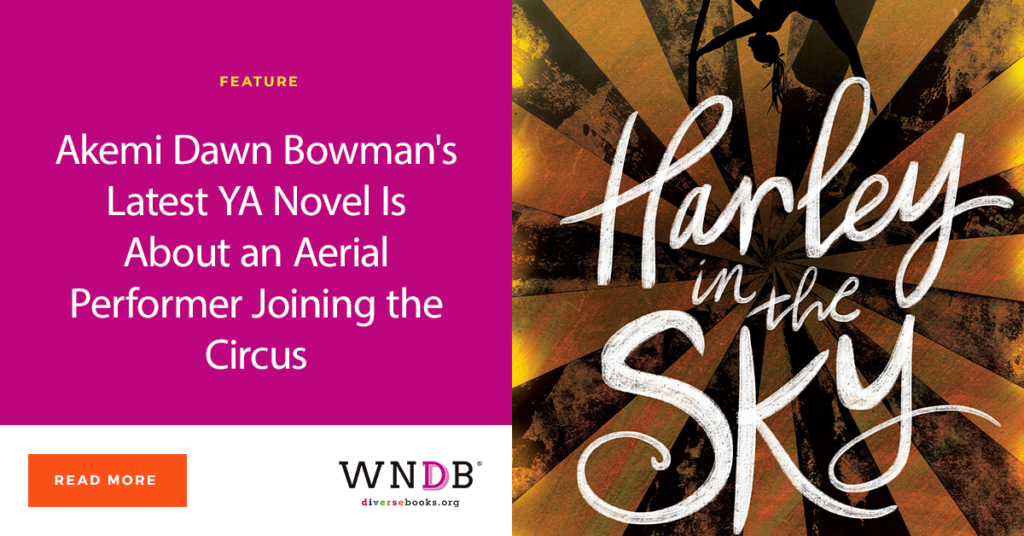 Harley in the Sky is Akemi Dawn Bowman’s third YA novel, but she says it’s the first in which she let herself write with no worries, choosing to focus on the writing itself and not on everything (marketing, reception, sales) that she has no control over.

“I quit Twitter, didn’t stress about reviews, and just enjoyed the good moments without comparisons or negativity,” Bowman shared. “And for me, it made the entire process so much more fun, because I haven’t been running on empty for months. I’m hoping it’s a sign that I’m growing, and finding a better work/life balance!”

Speaking of writing this book though, Bowman did share that she always struggles with drafting. When revising, she said, she can fix the story and mold it into what she wants, but drafting is a chore.

“I can’t always get to a better place until the revision stage, so having to push through a draft I know is terrible can be tough,” she said.

She shared a nugget of wisdom from Holly Black that has helped her through tough drafting sessions: “It was about how drafting is like cleaning a toilet—if you want it to shine, you have to work with a lot of crap first. It’s the most accurate piece of writing advice I’ve ever heard.”

Bowman is the award-winning author of Starfish and Summer Bird Blue, in addition to Harley in the Sky, which releases March 10, 2020 from Simon Pulse. She said her first two novels both dealt with heavy topics, like abuse and grief, and so for her third book, she “really just wanted to write something a little lighter.

“I’ve also dreamed of writing about the circus since forever, so I’m incredibly grateful my editor gave me a chance to do that.”

The book does deal with mental illness and living with an undiagnosed mental health issue, which Bowman said was very personal to her, especially to her teenage self.

Other themes Bowman has found herself exploring in multiple books are “messy family dynamics…and making it clear there isn’t a rule book on how to cope or heal because everyone experiences things differently.”

She almost always has an older mentor figure for her teenage protagonists to look up to and learn from—something she missed as a teenager.

“I know I return to familiar themes because I’m constantly writing the books I needed as a teen,” she said. “And for me, these are the themes that would’ve helped me.”

One of Bowman’s favorite characters in this book is one called Popo. “She doesn’t have a huge role in the book, but when she does make an appearance, she’s usually sharing wisdom and making Harley feel like she has a right to her culture,” Bowman said. “It’s something that feels very special to me, particularly as someone who is multiracial and felt like I didn’t really ‘belong’ anywhere growing up. Popo and Taipo also share the names of my own Popo, and I got to put a little piece of my own family’s history into the book—specifically with their reasons for leaving China, and how they found a new home in Hawaii. It’s a very small part of the story, but it felt like a way to honor my relatives, and to make sure their stories aren’t forgotten.”

Every once in a while during an interview, I feel something that an author is sharing on a deep, personal level. That happened to me when Bowman shared why she started writing.

“I’ve often struggled with telling people how I’m really feeling, usually out of fear that I might be bothering someone, or that I’ll come across as annoying,” she said. Rather than bottling her emotions up indefinitely, “writing became a way for me to express myself. And I found that since I wasn’t very good at telling people how I felt, it was much easier to write my feelings through made-up characters. Maybe in some weird way, it felt like a way to protect my heart, while still being honest.”

In addition to writing as a way to communicate what’s in her heart, Bowman shared that it’s an outlet that helps her mental health. She said she has something of an obsessive streak, which works out well when she’s compulsively channeling her energies into a project, but, “It’s a personality trait that can easily get channeled into less healthy avenues, like spending a million hours playing a video game, or falling into a black hole of online shopping,” she said. “But writing is something that feels productive. I love it, and I don’t feel guilty working hard at it because, by the end, I’ll have a finished manuscript to show for it. It helps give me direction, which is a really good thing for me.”

Previous Post: « Writing About Disability and Eugenics in 1928 in THE DEGENERATES
Next Post: Q&A with Valerie Bolling: LET’S DANCE! »
Happy pub week to LOVEBOAT REUNION by @abigailhing