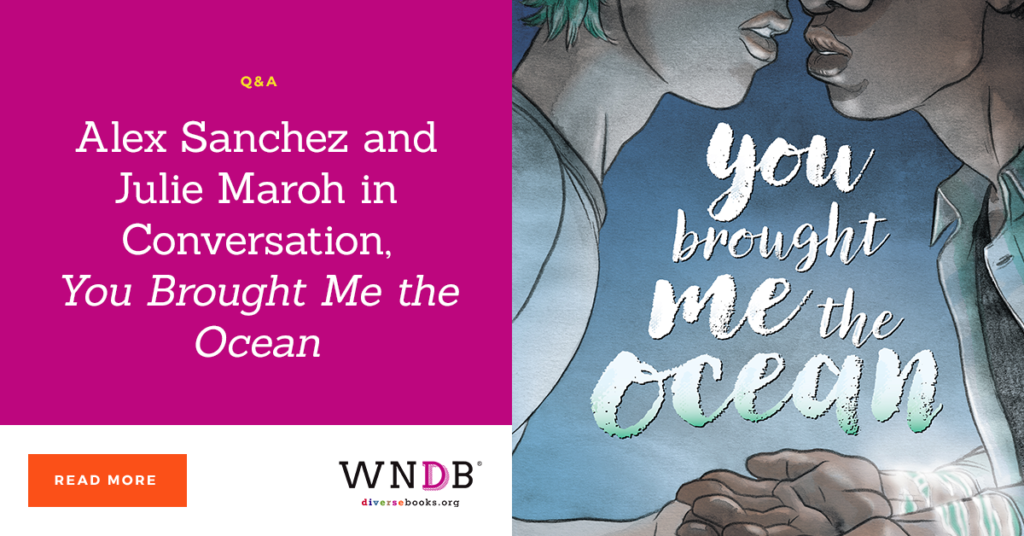 Today we’re pleased to welcome Alex Sanchez and Julie Maroh to the WNDB blog to discuss their graphic novel You Brought Me the Ocean, out June 9, 2020!

Jake Hyde doesn’t swim—not since his father drowned. Luckily, he lives in Truth or Consequences, New Mexico, which is in the middle of the desert, yet he yearns for the ocean and is determined to leave his hometown for a college on the coast. But his best friend, Maria, wants nothing more than to make a home in the desert, and Jake’s mother encourages him to always play it safe.

There’s nothing “safe” about Jake’s future—not when he’s attracted to Kenny Liu, swim team captain and rebel against conformity. And certainly not when he secretly applies to Miami University. Jake’s life begins to outpace his small town’s namesake, which doesn’t make it any easier to come out to his mom, or Maria, or the world.

But Jake is full of secrets, including the strange blue markings on his skin that glow when in contact with water. What power will he find when he searches for his identity, and will he turn his back to the current or dive headfirst into the waves? 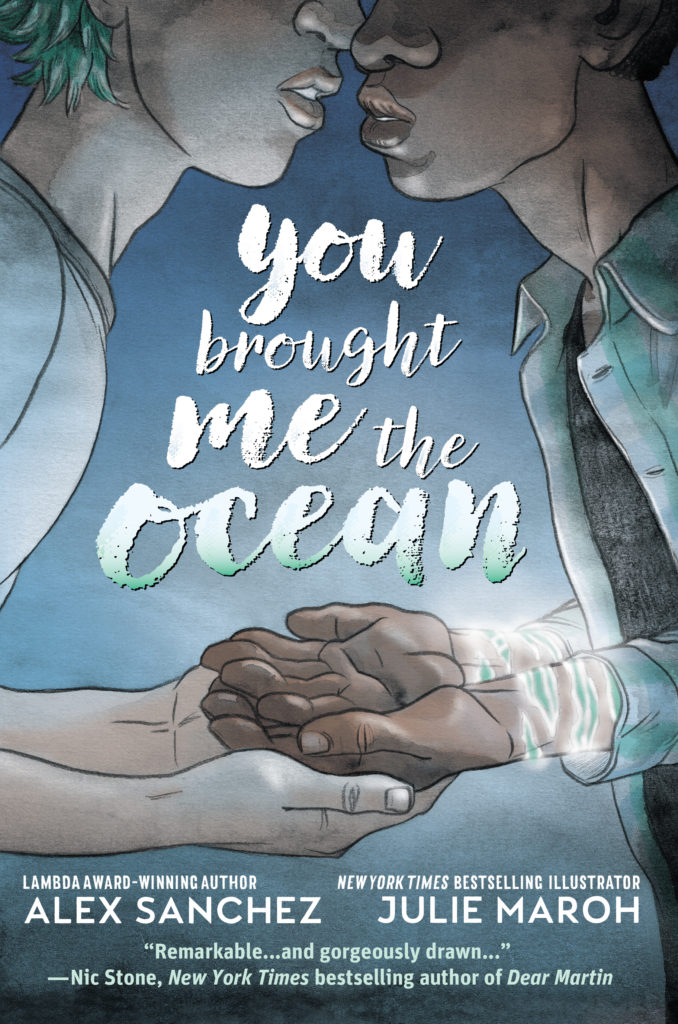 Alex: Jul’, I’m so proud to have worked with you on You Brought Me the Ocean. Everyone I show the book to loves your artwork. What role did art play in your life growing up as a queer young person?

Jul: Thanks Alex, not only was it a wonderful adventure to share with you but also a personal achievement—especially to be able to work with you!

I actually started to draw before I could even write my name, and then never stopped. I wrote and illustrated my first comic book series at around eight years old. So, I would say that art was central in my queer life as a kid, in the etymological sense of queer: I was the weirdo of the family, the black sheep, the Uranian solitary savage! Art defined me and shaped my road. I had the possibility to create my own way out or to use it to pass on information to my relatives that I felt unable to talk about out loud. It’s been truly cathartic. I started to write Blue Is the Warmest Color for this reason when I was nineteen years old.

Do you think writing has helped you understand and embrace your queerness? As a teacher, do you guide students toward this technique to make sense of what they’re going through?

Alex: Like you, I was a “weirdo” kid. I was fortunate that my mom was weird, too. She was a watercolor artist and always encouraged creativity, including my friends’ and mine, in whatever form—drawing, making up stories, dressing up. Her encouragement kept my imagination open. So, when I got to junior high and started to feel shame and guilt about being attracted to other boys, the open-minded creative part of me kept asking, but why should loving someone of the same gender be wrong? I was able to imagine a life in which it was okay to be who I was and attracted to whomever I felt attracted to. Writing stories about love and being true to who you are has definitely helped me find my voice, and become “me.” And I know that when we share our art and stories, it does the same for other people, especially young people, by keeping their imaginations open and hopeful. When I teach writing, I encourage my students to open up the same way, to share their “weirdness,” their unique and special voice.

In both You Brought Me the Ocean and Blue Is the Warmest Color the characters you draw are so emotionally evocative, whether they’re happy, or angry, or sad. Could you describe a little bit of your process—both your actual technique (do you do it all by hand or part digitally, etc.) but more importantly, how do you connect so compassionately with your characters and breathe such amazing life into them?

Jul: Wow…well first, thanks again Alex. That’s too many compliments for me to handle in one day! Hm, I guess the key is contained in your question already: compassion! Or empathy. Personally, I consider compassion the most important tool for an artist, and especially for storytellers. Empathy is necessary to embody the characters in your story. When I draw someone’s emotion, I must take distance from myself and simultaneously recognize my own humanity in them, feel what they feel. Basically, I can always tell the difference between a drawing I have brought to life with love and another where I wasn’t…present. That’s probably also why I never draw digitally. For me, a hand-to-hand combat between my own body and the paper allows me to dive completely in the embodiment I just mentioned. So yes, except for colors, the entire book is done by hand.

Regarding our characters in You Brought Me the Ocean, what would you say was evocative of your own experience, and which parts required you to come in from another perspective? You have water superpowers, right?

Alex: Wow, I’m even more in awe of you knowing that all those amazing drawings were made by hand—and so quickly! I like how you described your process of embodying the characters. The same goes for me. The way I breathe life into a character is by asking myself, how am I like them, how are they like me? By identifying that commonality, I connect with a character. And once I connect with them, I know readers will also be able to. After that, I can then build differences around the connection. So, even though I don’t have water superpowers (hahaha) like our main character Jake, I love the ocean. I wanted to study marine biology and every night since I was a boy my dreams carried me to the ocean (weird, huh?); so I connect with Jake that way. And even though my mom wasn’t scared of me getting near water like Jake’s mom, she could be annoyingly over-protective, and yet I knew she loved me. As for superpowers, I think Jake discovering his superpowers is a huge metaphor for accepting his true self as a loving and loveable being. It’s a message I’ve needed to learn and re-learn, and I know from my past books that it’s a message that will help a lot of readers.

I remember when we began working together on You Brought Me the Ocean, you had a clear strong vision about how you wanted to portray Jake’s best friend, Maria. Could you speak about that character and any thoughts in general about the portrayal of women in comics?

Jul: Oh Goddess… Two years ago, I started to write an essay for conferences on that topic, so how many hours do I have to respond?

First of all, in my relationship with comics, two aspects of of the medium particularly interest me: one, comics have always been a reflection of the socio-cultural context in which they are created, and second, comics are an excellent tool for political commentary and have been used in that regard a lot. Comics history started with satires! Therefore, when it comes to representation for women, you can see an evolution, but this isn’t an isolated motion: It follows what happens at a bigger scale of our society. If you look at comics through the prism of gender issues, from its beginning to the Cold War, the stories were bound hand and foot to patriarchal normative codes. Even though the comics industry opened up to women after the Second World War—largely to women readers and a bit to women creators—it wasn’t in order to free women from stereotypes or social oppression, but for capitalist and patriarchal reasons! Like, “Oh, you enjoy reading? We’ll make ‘women’s’ books for you to buy and to make sure that you stay home!” Then the Sexual Revolution brought us to a divisive phenomenon: On one side, dissociating sexuality from marriage has been liberating for women and sexual minorities, which you can see in comics of that period. On the other, objectivation and deformed idealization occurred simultaneously, in narrative works, media, etc. So, nowadays, you can notice that alongside gender studies all over the world, alongside queer and feminist activism, norms and stereotypes are eroding. There is a new global intersectional awareness that manifests itself through a more accurate representation of human diversity. And we see this in comics, too. My first comic book came out ten years ago and in the last decade I saw more women, queer people, and people of color taking on the medium and introducing new types of bodies, characters, inclusive stories… It’s really thrilling for me to be part of this shift. I’m sure you saw the evolution too, as an author, right?

What do you think our book brings to today’s queer youth?

Alex:  Rudine Sims Bishop famously pointed out how books can act as mirrors and windows. My wish is that You Brought Me the Ocean will act as a “mirror” for queer youth, showing them that they’re not alone and that it’s okay to be who they are. And I hope our book will give non-queer people a “window” into the lives of queer young people. Superheroes are like celebrities. I hope seeing our Aqualad standing up for his truth will give hope and inspire both queer and non-queer readers to have the courage to be true to who they are.

Thanks so much, Jul’! It was wonderful to collaborate with you, and if the opportunity ever presents itself again, I would love it. ? 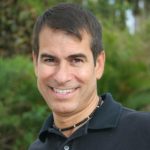 Alex Sanchez has published eight novels, including the American Library Association “Best Book for Young Adults” Rainbow Boys and the Lambda Award-winning So Hard to Say. His novel Bait won the Tomás Rivera Mexican American Book Award and the Florida Book Award Gold Medal for Young Adult Literature. An immigrant from Mexico, Alex received his master’s in guidance and counseling and worked for many years as a youth and family counselor. Now when not writing, he tours the country talking with teens, librarians, and educators about books, diversity, and acceptance. He lives in Penfield, New York, and at www.alexsanchez.com. 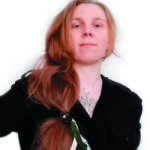 Julie Maroh is a cartoonist, illustrator, feminist, and LGBTQ+ activist from Northern France. They wrote and illustrated the graphic novel Blue is the Warmest Color, about the life and love of two young lesbians, which was adapted into the award-winning film of the same name. Julie is also the creator of Skandalon and Body Music, and illustrator behind DC’s acclaimed You Brought Me the Ocean, an original young adult graphic novel written by Alex Sanchez.