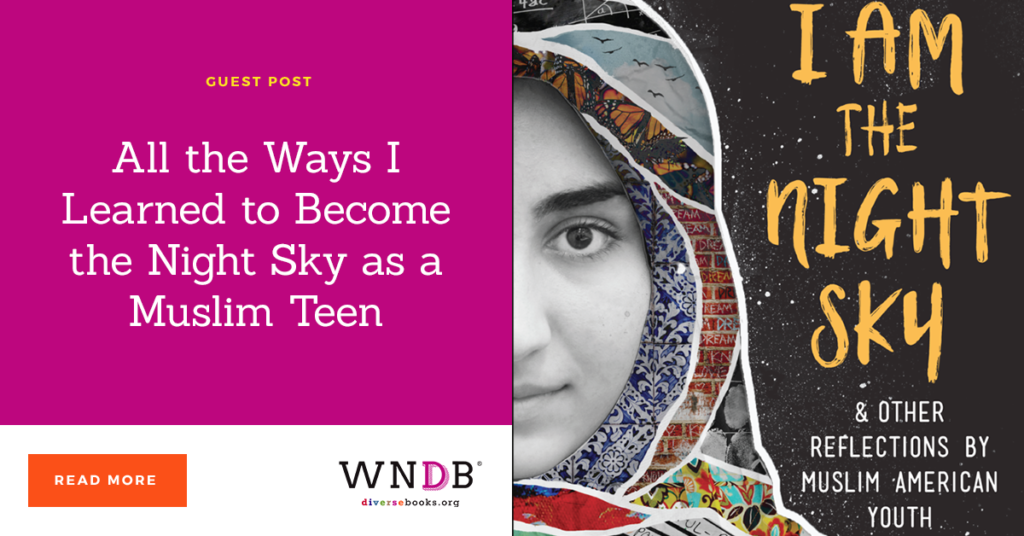 This guest blog is by Salihah ‘Sasa’ Aakil, one of the authors of I Am the Night Sky, a collection of poems, essays, artwork, and stories by 10 Muslim American teens that explore what it means to be young and Muslim in America today. The book was published by Shout Mouse Press, a DC-based nonprofit writing and publishing program dedicated to amplifying underheard youth voices.

I was beyond excited when I learned about the opportunity to be a part of this book project. I have been a writer and artist my whole life and leading up to this project, I had spent my time finding ways to be heard by the world. When I heard about the project, I was surprised to have such a great chance to get my voice out there and surprised that my friends and family at NWMI had grown so much that Shout Mouse Press had reached out to us. Mostly, I was surprised to be seen. I was surprised that Shout Mouse had even noticed that our stories needed to be told; maybe I shouldn’t have been. Maybe I should have known that some of the world does value the stories of my people, but it’s kind of hard to believe that without books like this. After surprise, I felt pride that I got to be one of the first, that I got to be someone who made the next Muslim girl know that her story was worth hearing.

I learned a lot throughout the process, while writing, revising, launching, sharing, and everything in between. Writing this book was a special exercise in stretching and strength. I’ve been uncomfortable, uncertain, nervous, tired. I had to grow during our two-week writing intensive. My mind was out of words and ideas, but my soul wasn’t out of stories. I had to stretch to get out all the tales I felt obligated to tell. I drew on my fellow authors for inspiration, drive, and energy. Music, memory, stereotypes, hyphens, we talked about everything. After the tiredness, I also felt proud, powerful, determined, and sure. Something about having my name on a title page made everything different. It made my words permanent and my back strong. And now, when people have discussions about diversity and own voices, Muslim Americans and hope, they look to me as if I know and I do and that’s special.

The book is called I Am The Night Sky and I think it’s funny that when people hear the name they’re ignorant of the lengthy conversations and mild frustration it took to choose it. The discussion of the title went on for a long time. We weren’t sure what to call something so full of varying experiences. I pushed for one thing, another author pushed for something else, another pushed something new entirely. We were too many things to consolidate into one title, but in the end, we came to more or less a consensus.

We named the book I Am The Night Sky after a piece I had written about redefining a thing that had been called evil, cruel, wrong. This resonated with us because that’s what we were doing, redefining our stories, we were the night sky, the night sky encompasses everything and so do our stories. We and our stories are layered, broad, dark, and bright, proud, and changing.

Sharing my story with more and more people has been the best part of this book for me. Seeing the faces of the people who believe in my words. Who have heard my story and our stories and found power in all the little and big things. Like how I tell people to call me Sasa, or how Bilal shares music with his grandma, and Leyla doesn’t know if she can wear shorts, and everything unmentioned and seemingly unimportant. On the days when I feel down or forget the power of what we’ve done, I imagine a Muslim girl somewhere in this country. I picture that she reads our book and understands that she can be like us. It gives me hope, drive, and pride to think that there could be, even, one girl like her. I write for her and I write for myself. 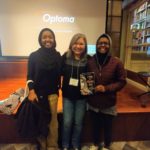 My name is Salihah “Sasa” Aakil. I’m a 17-year-old poet finishing a very eventful gap year in Silver Spring, Maryland, and starting college in the fall. I enjoy writing, painting, doing pottery, and talking to people. I like hunting down stories, asking people about their experiences, and creating art after them. I am a Black American Muslim teenager. In I Am The Night Sky, I wrote a series of poems and vignettes because I wanted to share my story. I’ve never been rich in anything but stories. And if one of them happens to change someone’s ideas, open their heart, give them joy, or show them that they can do what I do and better, then Alhamdulillah. Maybe they’ll end up rich like I am.

Previous Post: « How to Make Your Virtual Meetings and Events Accessible to the Disability Community
Next Post: Q&A With S. K. Ali and Aisha Saeed, Once Upon An Eid »
We're thrilled to reveal the cover for TOKYO NIGHT