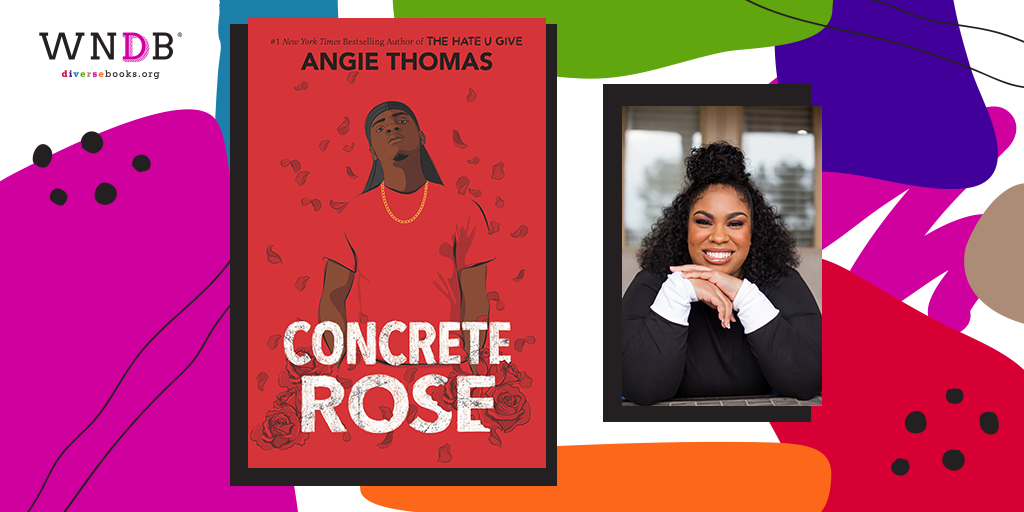 Concrete Rose by Angie Thomas is on sale on January 12, 2021. Order the book here!

If you’re into kidlit at all, the chances are really high that you’re familiar with the name Angie Thomas. Author of NYT bestsellers The Hate U Give and On the Come Up, Thomas is also one of the 2015 inaugural winners of the Walter Dean Myers Grant from We Need Diverse Books. In addition, she’s the author of the January 12, 2021 release Concrete Rose.

Thomas hopped on Zoom with me to spill some recollections about how she got into storytelling, as well as discuss her books and what it meant to win the Walter Grant when she was an aspiring author with a barely-functional laptop, the screen held together with tape and the keyboard fully nonfunctional. Thomas said her old laptop died the week after she won the grant and was able to buy a replacement computer.

“Winning the Walter Grant was like the starting point of my career,” she recalled. “Had I not gotten it when I did, The Hate U Give may not have happened.”

Thomas said that as long as she remembers, she has been a fan of telling stories. When her mom read her bedtime stories whose endings she didn’t like, Thomas just rewrote her own version of them.

“So like I hated Green Eggs & Ham,” she said, “I didn’t like the way that it ended, so I was always coming up with my alternative endings and doing my own fan fiction.”

A pivotal moment came in third grade when a teacher caught Thomas writing a story at the end of an exam and had her read it for the class. The story, a space adventure involving Mickey Mouse, captivated her young audience—especially after Thomas ended it on a cliffhanger (one involving a meteor approaching Mickey’s space ship) and left them all wanting more.

After that, Thomas’s teacher had her read a story to the class every Friday.

“I got bit by the bug then,” Thomas said. “I’ve loved getting that gas out of people with the cliffhanger.”

Although she was always a storyteller, Thomas describes her younger self as an “unimpressed reader” and as a teenager, she turned to hip hop to tell her stories.

“Hip hop filled that void in for me, rappers told the stories that I connected with, that represented me,” she said. “Honestly, when I decided to become a rapper, it was because I wanted to be able to tell stories and I thought that was the only way I could do it. When I decided to write fiction, hip hop had given me permission to tell stories without filter, without holding back, and it gave me permission to be authentic in my storytelling.”

“If you wanna get to know my books a little better, it’s good to listen to the ones I just mentioned to get a better understanding of my books,” she said, after also listing Cardi B, Tupac, and Nas. “I listened to a lot of the storytellers in hip hop growing up,” she said.

After the runaway success of her first novel,  Thomas got to work on her sophomore work, On the Come Up, and she said that book was a hard one to write.

“I had extraordinary circumstances,” she recalled. “The success of The Hate U Give still blows my mind. I’m talking about a book that was still on the bestseller list, still is, and had this film out and all of these things. I had a lot of pressure that I put on myself. I was traveling all the time, and my life was basically upended, and I was supposed to write a second book in the midst of this.”

Before her book’s publication, Thomas had hardly left Mississippi; after it, she was on planes twice a week, traveling for events in different cities, meeting all sorts of people, and trying to write a good follow-up novel.

Instead of rushing the project, Thomas went to her agent and editor and asked for more time. The book’s release date was ultimately pushed back, releasing on February 5, 2019.

Even now, in the midst of the COVID-19 pandemic, during which many creatives are berating themselves for their productivity (or lack thereof), Thomas stressed that it’s important to take a break if that’s the best way to take care of oneself.

“The most important part of being a writer is taking care of yourself,” she said. “You’re the priority, the words can wait.”

Thomas’s new novel, Concrete Rose, is set seventeen years before her debut and features protagonist Maverick Carter—otherwise known to The Hate U Give readers as Big Mav, Starr’s father.

“Maverick is probably my favorite character from The Hate U Give, and I feel bad for saying that because Starr should be. That’s nothing against Starr she’s a close close close second, but it’s Mav for me,” Thomas said. “I enjoyed writing him, and every scene he was in, it felt like he became a star on the page. He was the character that everybody asked me about the most. He was also the one I seemed to have the most fans for.”

Thomas laughed as she recalled going on tour and having adult women come up to her to profess their love for the character. In fact, one of the highlights of the writing and publication process for this book, she said, was seeing how delighted readers and fans were when it was announced the prequel would be about Maverick.

In addition, she found joy in getting back into the world she created and first published a book about in 2017.

But the idea of writing about his past in book form began to take place when Thomas visited the set of The Hate U Give movie adaptation, in which Russell Hornsby played Maverick. According to Thomas, every time he stepped foot on set, Hornsby was in character—whether he was in a scene or not.

He even went so far as to treat the young actors portraying his on-screen children as though they were his kids. And importantly, he began asking Thomas hard questions about Mav’s background, like his relationship with his mother or with King. 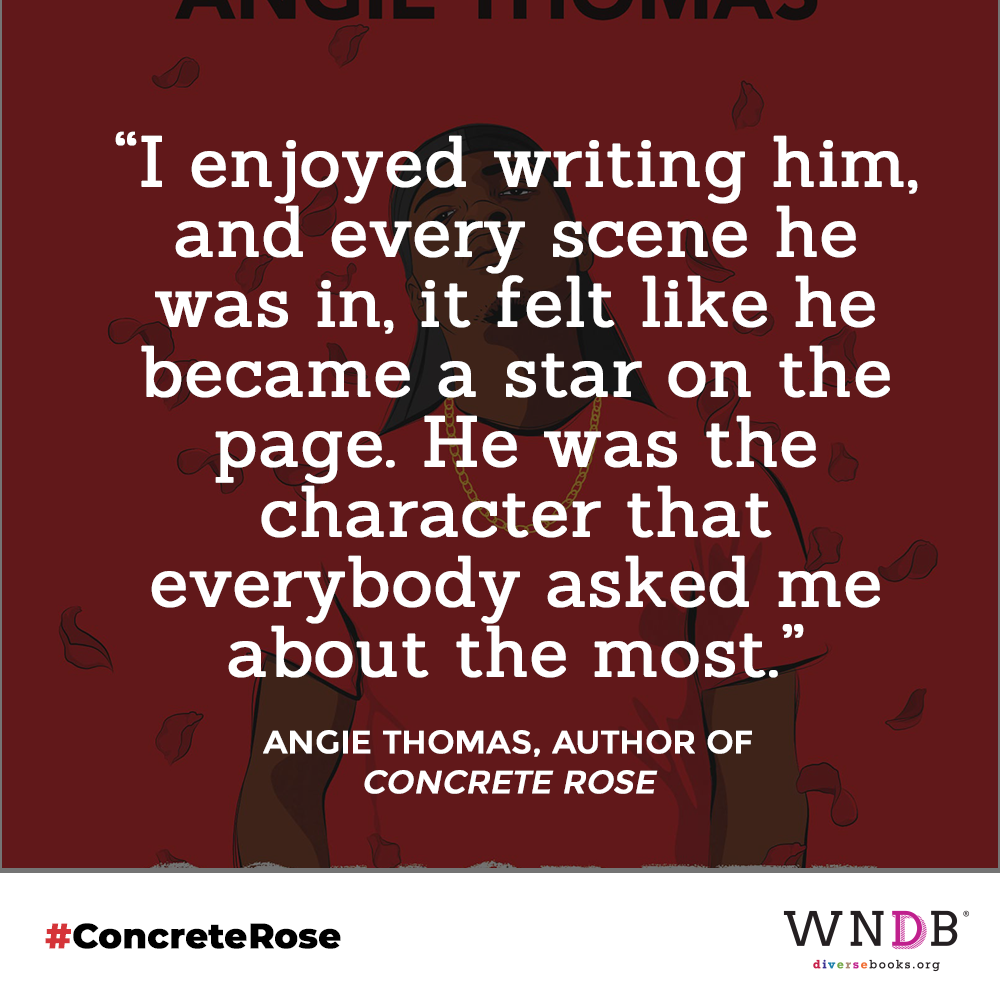 “Having those conversations with him made me think, ‘Huh, maybe I should put this in a book,’” Thomas said, “because to be honest, I was coming up with stuff on the spot. It was things I hadn’t thought about. Art influences art, because the artistry of Russell Hornsby as Maverick influenced me to write Maverick’s story.”

Over the course of writing the book, Thomas came to realize that, though on the surface they have a lot of differences, she and Maverick have more in common than she initially thought.

“Writing the perspective of a cis straight seventeen-year-old Black boy was very different than what I’m used to doing,” she said. “As a cis straight Black woman, I’m not gonna say that my experience is what his is, in the least. I wanted to respect him as a character and [anyone] who picks up this book and sees themselves in him.”

Though her next book is another YA contemporary, Thomas is currently working on a middle-grade fantasy whose code name is “literal Black girl magic,” which she said is bringing her great joy to draft.

“Writing this fantasy novel has been an escape,” she said. “It’s giving me the joy I need right now. If you’re a writer, you’ve gotta write for some joy at some point or another.”

And for writers, Thomas had several pieces of advice to give, including the idea that if you write, you’re a writer.

“Take that title and own it, no matter whether you’re published or not you’re a writer,” she said. “You’re gonna get a lot of ‘nos’ along the way, but all it takes is one ‘yes’ to change everything.”

And as for why to write the book you’re thinking about, Thomas also had an excellent piece of advice: “Write because it’s the story you will get caught up in.”

Thomas recommended three books she thinks readers would love: Grown, by Tiffany D. Jackson. “She really did that in there,” she said. “Even after you put it down you’re gonna be like Tiffany really went there.”

She also recommended Dear Justyce by Nic Stone, saying “She knocked the ball out of the park. I think it’s a great companion to Concrete Rose and we didn’t do that intentionally. I still think about that book.”

Finally, Becky Albertalli’s Kate in Waiting, of which she said, “That book is going to be a balm. She wraps you up in a blanket and wraps you tight.”