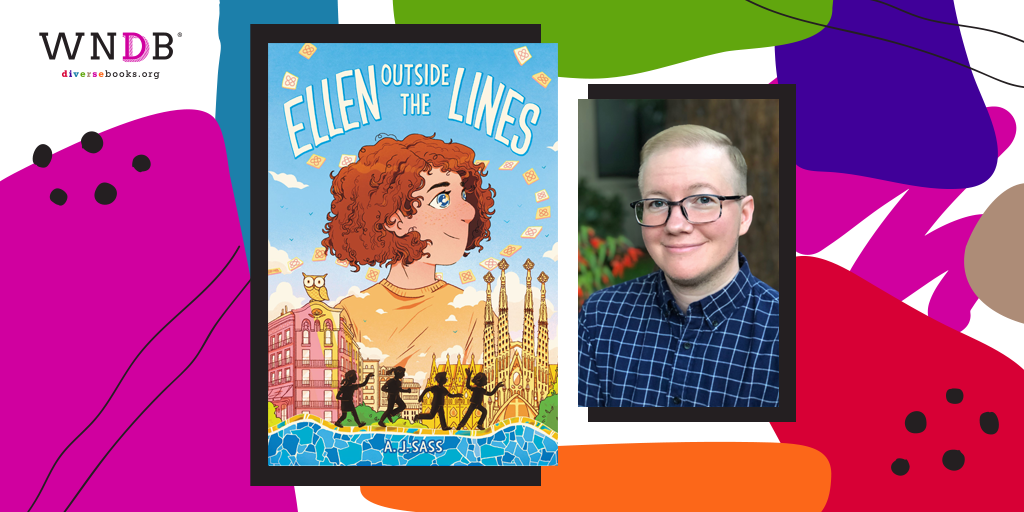 We previously interviewed A. J. about Ellen Outside the Lines here.

When my proposal for my sophomore novel, Ellen Outside the Lines, sold, I cycled through a mix of emotions. I was thrilled to get to write another book, of course, but I was also nervous. Although I am autistic like my main character, Ellen, this would be my first time writing a story from a neurodivergent perspective.

At the outset, I knew this was an opportunity to tell a story through a lens inspired by my lived experience, that it was a narrative other autistic people might be able relate to. I also knew my readership wouldn’t exclusively include readers who are autistic; many might not be familiar with autism at all. So, I was excited to dive in, with a healthy dash of nervous about crafting a narrative that felt both authentic and accessible.

It was difficult at first, trying to juggle goals that felt somewhat at odds with one another. On the one hand, I wanted autistic readers to see themselves reflected in Ellen as she explores Barcelona on her school’s study abroad trip, even if their experiences didn’t align one-hundred percent with hers. I also hoped to introduce non-autistic readers to Ellen’s world in as organic a way as possible.

How do you tell a story that feels like it’s in a language only some readers inherently know? This was a question I kept snagging on as I worked through my first draft.

I started with a list of the experiences I found challenging when I was a kid. There were the social interactions with my peers I often felt like I fumbled. Visual, tactile, and auditory overwhelm that my classmates didn’t deal with. Wanting to rock or hand-flap—often called ‘stimming’—to help regulate or express my emotions but always hesitating, because I knew this might get me weird looks.

From there, I broke things down further. I placed my struggle to converse in larger friend groups and instances where my own internal logic created rules no one else adhered to under a category I labeled ‘social interaction.’ The unpleasant textures of certain foods ended up under ‘sensory overwhelm.’ And on and on, I made my lists, until I started to feel overwhelmed by the abundance of material I had to work with.

I struggled with how to incorporate these experiences all through draft one and into revisions. It wasn’t until I realized I could approach Ellen’s reactions to social and sensory overwhelm from external angles, while continuing to acknowledge it from her first-person narration, that everything began to fall into place. In other words, I crafted the external aspects of my story’s plot, as well as the observations of secondary characters, to answer questions about autistic experience that neurotypical readers might have, while allowing Ellen’s perspective to remain authentically her own.

For example, Ellen has a robust support system. It’s worth noting that not all autistic people know they are autistic at Ellen’s age; I didn’t learn I am autistic until I was older. But I decided that Ellen and her family would know she is autistic, that she would have an existing relationship with a therapist who offers strategies to counter her anxiety and overwhelm and navigate social situations. Ellen is consequently equipped with vocabulary to explain how she is feeling from the get-go (sensory overwhelm, overload, shutdown, etc.), along with ways to calm herself (stimming, breathing exercises, and positive self-talk). Readers, by natural extension, are informed of this vocabulary and these coping strategies early on, as well. They can see Ellen internally analyze what is causing her anxiety and overwhelm, then put strategies in motion to find her calm. By doing this, I hoped to give a nod to autistic readers who may already be familiar with these concepts while simultaneously opening a door of understanding to others.

The story’s setting also offered a chance to acknowledge challenges some autistic people face, because it primarily takes place on a summer study abroad trip to Barcelona, Spain. While Ellen is familiar with settings that might cause overwhelm back home in Georgia, Barcelona is completely new to her. I drew inspiration from my own experiences as a frequent traveler and laid out circumstances that could be challenging for someone with sensory sensitivities like Ellen: at the airport, in her hotel, and while navigating the Barcelona subway system with classmates she doesn’t know well.

Finally, while many of Ellen’s classmates already know she is autistic, most aren’t entirely aware of what that means beyond the barest of details. The exception is Laurel, who has been Ellen’s best-and-only friend since they met years earlier. But with Laurel branching out and wanting to expand her social circle, Ellen finds herself spending more time with different classmates. I decided to assign Ellen to a scavenger hunt group that included teammates who would both support and challenge her, kids who would be respectful of Ellen’s differences, but also curious about them.

Ellen responds, “For being autistic?” Once Gibs nods, she answers, “[n]o. It’s just how my brain developed. You can’t take medication to change it.” And that’s that: a classmate poses a question based on his own experience of being neurodivergent and Ellen explains how her experience differs. The topic of the conversation then shifts, but before it does, Ellen takes a beat to think, “I like who I am, even if it makes me a little different from everyone else.”

In these examples and more, I attempted to strike a balance between staying true to my own experiences as an autistic person and using my story’s setting and characters to clarify aspects of the autistic experience I thought might be unfamiliar to readers who aren’t autistic themselves. It is my hope that I’ve managed to make Ellen’s reactions in Ellen Outside the Lines feel relatable for autistic readers and accessible for everyone else, regardless of their prior knowledge of autism. 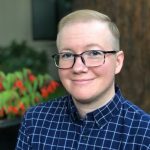 A. J. Sass (he/they) is an author whose narrative interests lie at the intersection of identity, neurodiversity, and allyship. His debut novel, Ana on the Edge, was a 2020 Booklist Editors’ Choice, an ALA 2021 Rainbow Book List Top 10 for Young Readers, and a Junior Library Guild Gold Standard selection. His sophomore novel, Ellen Outside the Lines, is also a Junior Library Guild Gold Standard selection. A. J. is the co-author of Camp QUILTBAG* (Algonquin, 2023) and a contributor to the This Is Our Rainbow: 16 Stories of Her, Him, Them, And Us (Knopf Books for Young Readers) and Allies: Real Talk About Showing Up, Screwing Up, And Trying Again (DK/Penguin Random House) anthologies. When he’s not writing, A. J. figure skates and travels as much as possible. He lives in the San Francisco Bay Area with his partner and two cats who act like dogs. Follow him at sassinsf.com or @matokah on Twitter and Instagram.

Previous Post: « Q&A With Rachael Lippincott and Alyson Derrick, She Gets the Girl
Next Post: Q&A With Katherine Locke, This Rebel Heart »
Congratulations to the 2023 #ALAYMA winners and ho