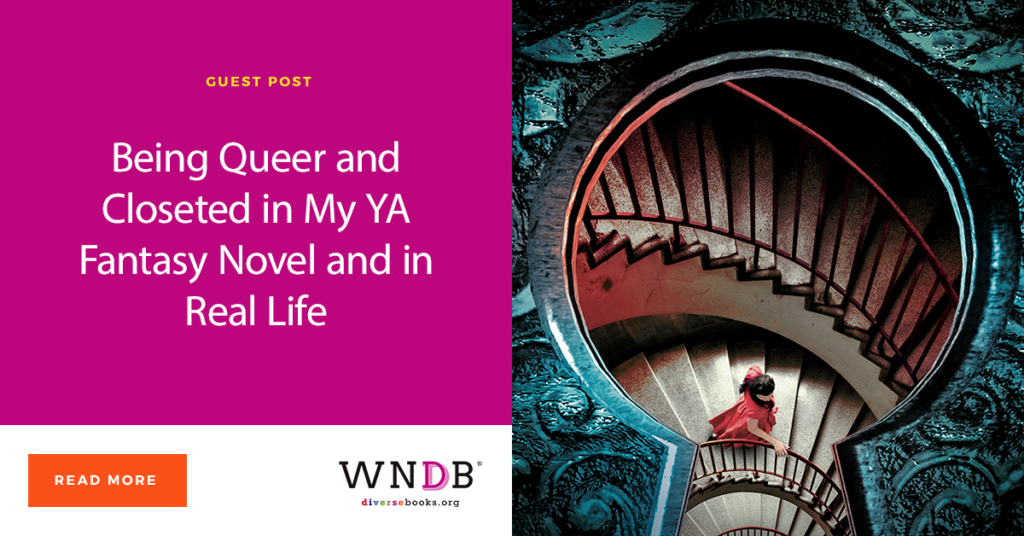 Both in this particular post and in my YA fantasy, Beyond the Black Door, I wanted not only to write about the ways in which we can be queer but the ways in which sometimes queer people are closeted. Let’s face it: Unless you are very fortunate in your environment, being closeted at least at some point might be a fact of life. I’m queer and I’m still closeted in some ways myself, and so I wanted to write characters that were the same, in order to reflect and explore my own experience.

The closet can be something we escape after our teen years, when we leave home and go to a more socially progressive place, such as a new city or college. It can also be a place we have a hard time ever leaving, especially with certain family members or social groups. It can even be a place we go back to, such as in a new work environment or if we move to a new town or country. It’s not necessarily all-or-nothing, or a one-time thing.

And it’s okay, as long as we’re okay.

Kamai, my main character in Beyond the Black Door, makes no secret of the fact that she’s attracted, in whatever confusing way, to people of multiple genders—just like my hitting the college scene some years ago and trying to explore my options for the first time after leaving a conservative small town. I told everyone on campus I was bi (and still often do), since I felt safe because the concept of bi-ness was relatively well understood and accepted there. This is generally the case in Kamai’s world, as well. 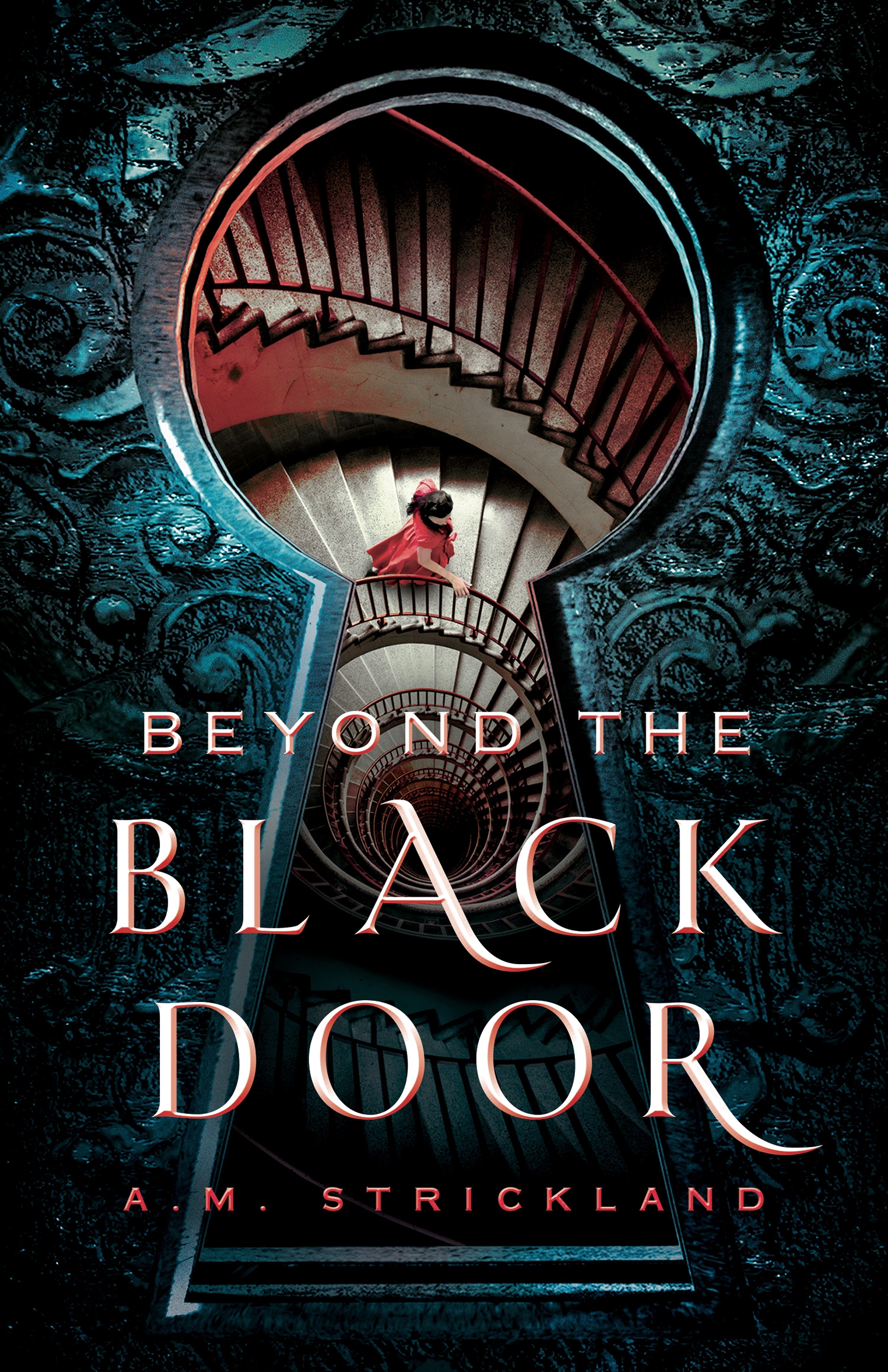 She does, however, sometimes want to hide the fact—especially at first—that she’s asexual because she wants to fit in within her hyper-sexualized environment and feels as though a lack of sexual attraction for others is something that keeps her from being “normal.” It’s not until she both grows more comfortable with herself and the people around her, gaining trust in her friends, that she comes out of that closet, and even then it’s just to her inner circle. She doesn’t tell her father, with whom she has a terrible relationship, and doesn’t announce it to the wider world around her. While her environment is still very sexualized, the latter choice is less about fitting in and more about wanting to fool people into thinking she’s training to be a courtesan so she can better spy on them. She has accepted herself, and that’s the most important part.

It can be incredibly frustrating and stifling to be in the closet, but sometimes we stay there for valid reasons. Safety is the most important—we might not feel physically safe, or safe from emotional abuse, like with Kamai and her father. Sometimes it’s a matter of comfort—we don’t trust those around us to understand. Sometimes our queerness is something we’d rather keep to ourselves for the time being for whatever reason (such as spying). Even if it’s as small as “I don’t feel like explaining because I’m tired,” that’s legitimate, too. Being in the closet is nothing to be ashamed of. You’re not less queer just because people don’t know you’re queer. You’re not lesser, period.

Unlike my being bi(romantic), I don’t tell many people in my personal sphere that I’m asexual. The primary reason being: It’s not their business. Telling people I’m ace can lead to all sorts of awkward questions about my personal life, partially due to the fact that I’m married, and also because asexuality isn’t something that’s well-understood. Sometimes coming out is a good opportunity to educate people—such as about the fact that ace people can be romantically involved with others and even have sex—but sometimes I just don’t want to, because it’s not comfortable. And that’s fine! I wrote an entire book about a character exploring and explaining their asexuality, so it’s probably okay if I take a day (or more) off. And it would be okay if I hadn’t written a book.

I have an even deeper closet, one that I explored in the character of Kihan. [Mild spoilers ahead.] Kihan is a trans man, but we don’t find out until halfway through Beyond the Black Door, and even when we do, he spends most of the rest of the book still going by “she” until he is comfortable with “he.” I can see how some people might have a problem with this, how Kihan doesn’t fit their expectations of what it means to be trans or to come out of a closet. But, as I’ve said, just like there isn’t one way to be queer or to be in the closet, there’s not one way to use pronouns.

Another “spoiler”: I’m not cis. I’m genderfluid, going by she/they pronouns. Hardly anyone I know in real life knows this, despite my discussing it occasionally on Twitter. (And even then, my goodness, if only y’all knew how hard and terrifying it was for me to add “she/they” to my profile.) I fluctuate somewhere between demi-girl, neutral, and demi-boy, but I don’t ever go by “he.” Why, if “she” is okay? Or why not always “they”? Partially, it’s because of people’s expectations and my own comfort level in challenging them—or, in other words, a fear that I won’t be accepted and an unwillingness to see if I’m wrong about that. Partially it’s a familiarity with “she” and a lack thereof with “he.” Partially it’s not wanting to perform to meet people’s expectations. (Performing exaggerated queerness for others feels as disingenuous and triggering to me as performing straightness.) And sometimes, it’s just sheer laziness in not wanting to correct people.

All of these feelings and more contributed to why Kihan says, “Wait, I’m not ready yet,” in Beyond the Black Door, after he comes out to close friends as trans. I allowed him to stay in the closet just a little bit longer, because that’s okay, and frankly, it’s realistic. Like closets, everyone has a unique approach to pronouns (and the two can even be intertwined). If you’re trans, whatever pronouns you use don’t make you any less trans.

That said, because he’s comfortable and it’s what he wants, Kihan eventually makes the leap that I’m still hesitant to make, and I’m so proud of him for that. (I can be proud of my own characters, can’t I?) But the emphasis is: he’s comfortable and it’s what he wants. In Beyond the Black Door, I tried to make it clear that Kamai and Kihan don’t owe anyone (excepts themselves) their personal truths. They are allowed to do what makes them most comfortable—to perform their queerness, to mask it, or to just be—exactly as I believe everyone in the real world should be allowed.

If being out and proud makes you comfortable, do it. If you don’t feel safe and the thought makes you squirm, maybe wait. There are many ways to be queer, and being closeted doesn’t make your identity any less valid. Do what feels right to you when it feels right, and know that there are people out there who support you, whatever and whenever you decide. 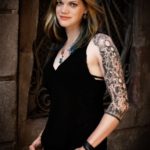 A.M. Strickland was a bibliophile who wanted to be an author before she knew what either of those words meant. She shares a home base in Alaska with her husband, her pugs, and her piles and piles of books. She loves traveling, dancing, tattoos, and every shade of teal in existence, but especially the darker ones. Her books include Beyond the Black Door and Wordless. Find her on Twitter.

Previous Post: « 15 Books to Gift, According to Author Rebecca Kim Wells
Next Post: The Free Black Women’s Library Celebrates Black Authors and Readers »
Save the date for the #WalterAwards23! You can now