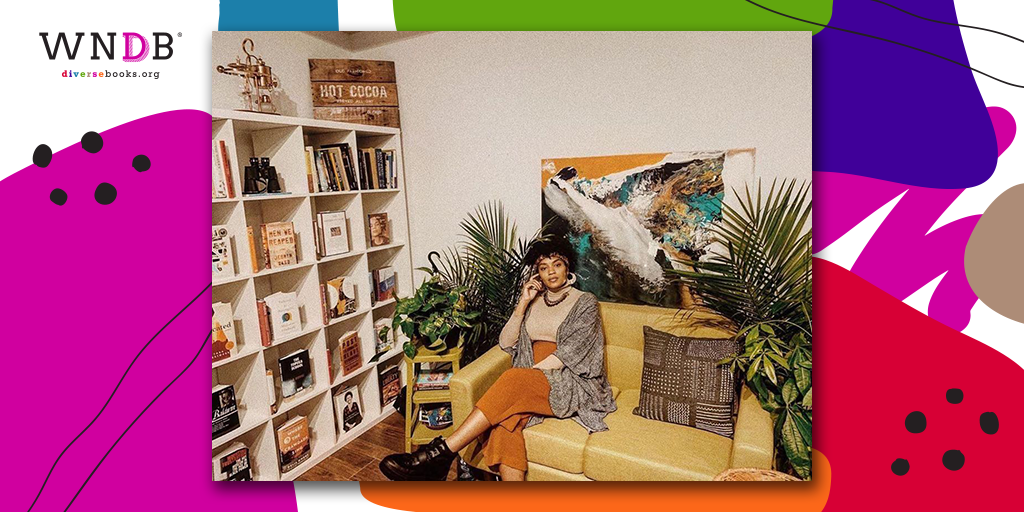 Read our list of Black-owned bookstores and other diverse independent bookstores you can support.

Community bookstores are hallowed places where ideas are shared, coffee is sipped, and patrons gather to indulge in the love of great books. In the era of Amazon, independent bookstores have realized the necessity to adapt to a changing world, one in which books can be ordered with the push of a button and with the promise of free two-day shipping. Black-owned bookstores face a particularly unique set of challenges in light of these ongoing developments, and often meet new issues with creative solutions.

The Open Education Database reports that there are around 10,800 independent bookstores operating across the United States. Of this number, a mere 6 percent of those are Black-owned. VaLinda Miller, owner of Turning Page Bookshop in Goose Creek, South Carolina, shares that the challenge begins at the financing stage. “We do not get the opportunity to walk into a bank and say I need $50,000 to open up my business, or for capital, or to buy some inventory,” Miller told We Need Diverse Books. “They want to know all your history, you have to have the perfect credit score, and all of that. Many of us don’t have that lined up.”

The history of discrimination in lending services is longstanding and well-documented. Until World War I, the United States federal government mostly stayed out of private credit markets. However, after the war, the government began extending credit to certain groups of entrepreneurs, according to Oxford Research Encyclopedias. During this period, the centuries-long American crusade of oppression and subjugation of African American communities was in the Jim Crow phase. Black business owners were barred from applying for and receiving, credit through traditional funding opportunities.

Because this institutional discrimination was never adequately addressed and corrected, Black business owners grapple with limited financing options (in relation to their white and Asian peers) even today. According to a 2018 Small Business Association report on financing patterns, “data show a greater reliance among minority-owned businesses on personal and family savings as a source of startup capital, despite wealth levels of Blacks being less than one-tenth those of non-Hispanic whites. Blacks [and Hispanics] were less likely to have business bank loans compared with whites and Asian-owned businesses.”

Miller, from firsthand experience, describes the situation in more candid terms: “They ask us to jump through so many hoops, and when we do jump through the hoops, they still give us a small amount of the pie.”

Jeannine A. Cook, of Harriett’s Bookshop in Philadelphia, PA, cites lack of access to books as a major challenge currently facing Black bookstores. Large companies swoop in to preorder books, leaving little to no opportunity for smaller bookstores to acquire new titles. This disproportionately affects Black bookstores in particular, as they are often not in positions to negotiate on the level as some of their peers.

One solution that Cook has employed is to build relationships directly with publishers and authors. Opened in February 2020, Harriett’s Bookshop’s mission is to celebrate and uplift Black female authors, activists, and artists. Developing direct relationships with members of these communities and their publishers helps Harriett’s Bookshop source and access new inventory.

Black-owned bookstores, like all Black businesses and communities across the board, have regularly faced the persistent challenge of corporate and individual performative activism. Following the 2020 murders of George Floyd and Breonna Taylor, companies of all sizes swiftly began posting in support of Black Lives Matter on their websites, their social media accounts, and within their physical stores. However, when it comes to taking action, some of the same companies neglected to act in a way that would affect real change. This performative activism hurts Black bookstores, and Black communities because it does not provide any meaningful investment or advancement.

Cook explains that “these corporations are saying Black Lives Matter, but aren’t willing to exit the bookstore arena to allow Black bookstores to thrive. They could do that, and would still be making millions from their other industries. But they still want their hands in the pot, and aren’t willing to take real action to create real change.”

Turning Page Bookshop also experienced an increase in the support of Black-owned bookstores ushered in by the tumultuous events of spring 2020, but Miller worries that the excitement will be short-lived. “During Black Lives Matter [protests], the community was demanding Black-authored books from Black-owned businesses,” Miller said. “But I want people to remember that Black authors have been around for centuries. Don’t just limit it to one summer, a few Black authors, and a few Black bookstores.”

Founded in Seneca, SC in 2014, and relocated to Goose Creek, SC in 2017, Turning Page Bookshop has taken steps to build upon the recent enthusiasm for Black bookstores. Miller forged a partnership with Total Wine, and she offers a free glass of wine to customers on Fridays. She has also opened a used bookstore room where every book is $2.

As Black bookstores diversify to remain competitive, new challenges arise. Jeannine A. Cook recounts walking into the local branch of a large chain bookstore and seeing an exact replica of one of her original products (a t-shirt which she designed herself, for sale in her store) on the shelf. “Black people, we are the culture,” Cook said. “But how do we protect ourselves from things like this? We create, and are stolen from.” 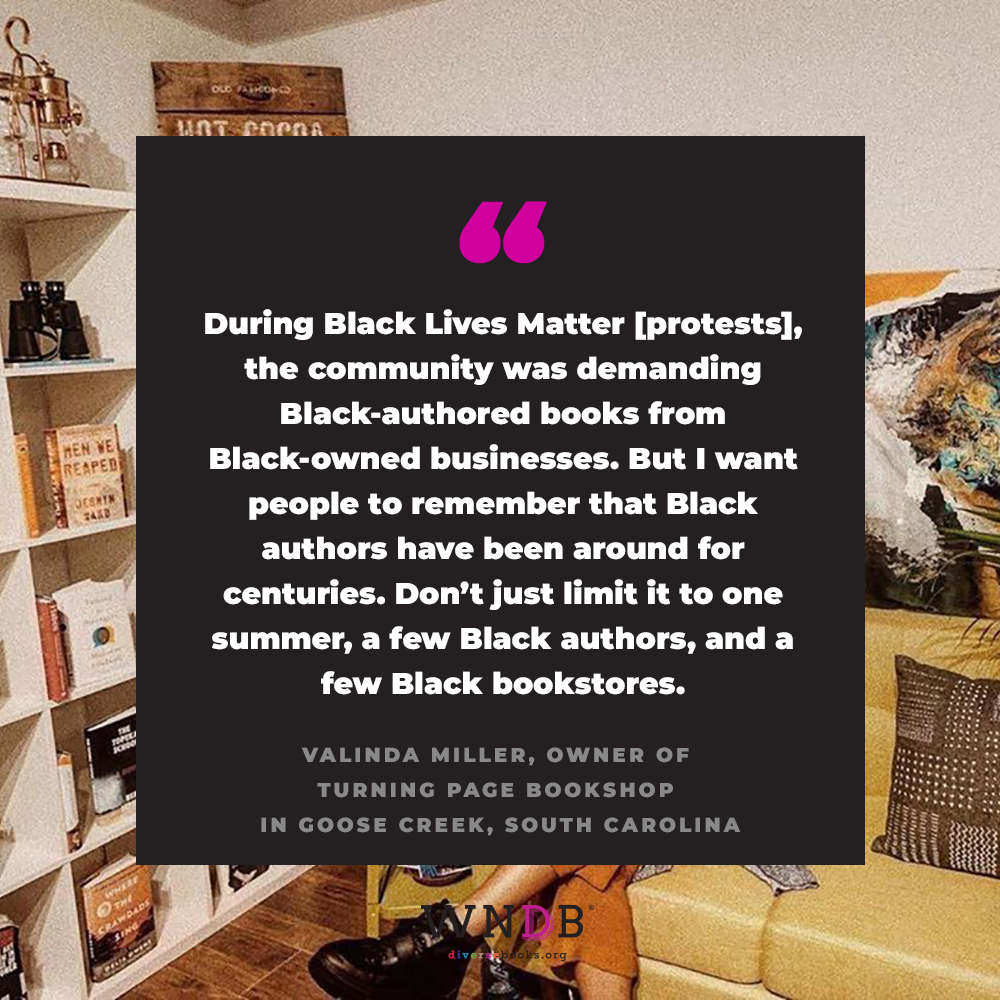 Finally, gentrification is an ongoing problem for owners of Black bookstores. Black people tend to support each other; the collective spirit of Black communities, dating back to pre-colonialism Africa, was carried to America by enslaved people. It has since been an underlying current within Black communities. However, as gentrification pushes Black people out of communities they have built and lived in for decades, Black bookstores feel the effect of the changing environment.

“We have to think about what we can sell, and if the surrounding community is not Black, you have to be aware of what they want,” Miller explained. “It’s my goal to always introduce the community to Black authors, but I also know that I have to carry a good mix. And if I can’t get the book that’s the newest thing out there, I know they can just go to Amazon. So it’s a delicate balance.” Miller sees the challenge as a way to champion Black authors, and introduce the local community to information about the rich history of Black literature.

Black bookstores have been an important pillar of Black communities for decades. Civil Rights leaders and SNCC students strategized, and organized, in various Black bookstores across the country. Most Black people who grew up in the Baptist church will recall browsing books in some version of a church bookshop, as church women floated nearby in elaborate hats. And Black bookstores have served as the gathering place for many open mic nights, Black History programs, spelling bees, and other community togetherness activities that have strengthened and empowered Black communities. These feelings are what cannot be duplicated or replicated, and there is no corporate comparison.

Jeannine A. Cook shared a beautiful story about the naming of Harriett’s Bookshop: “Yes, Harriett’s Bookshop is named after Harriet Tubman. That was very intentional due to the moment we are in. But people ask, why do you spell “Harriett” with two T’s instead of one? Well, after she escaped from slavery, Harriet Tubman changed her name to Harriett, after her mother. So the name of our bookshop, and the work we do, is in honor of both Harriett and her mother. That is community. That is what we do.”

J. Nailah Avery is a (non-practicing) lawyer and Black history scholar who currently works in the tech/startup space. She enjoys covering topics from a Black historical and cultural perspective, and is painstakingly learning to play the harp.