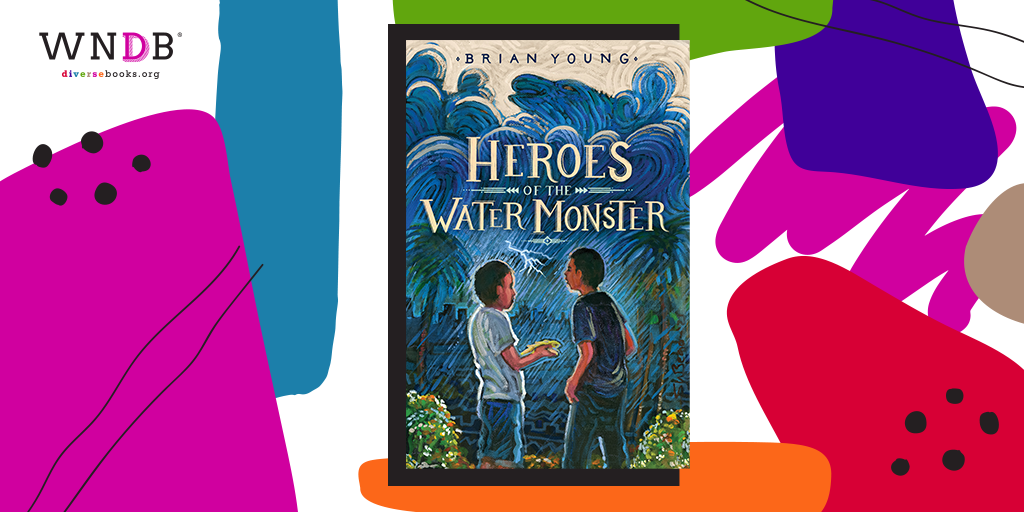 Today we’re excited to reveal the cover for Heroes of the Water Monster by Brian Young! The cover was illustrated by Shonto Begay. The book will be released on May 23, 2023 by Heartdrum/HarperCollins. Preorder it here or here. Read on for a Q&A with the author and an exclusive excerpt!

Edward feels ready to move in with his dad’s girlfriend and her son, Nathan. He might miss having his dad all to himself, but even if things in their new home are a little awkward, living with Nathan isn’t so bad. And Nathan is glad to have found a new guardian for Dew, the young water monster who has been Nathan’s responsibility for two years.

Now that Nathan is starting to lose his childhood connection to the Holy Beings, Edward will be the one to take over as Dew’s next guardian. But Edward has a lot to learn about taking care of a water monster. And fast. Because Dew’s big sister, the powerful Yitoo Bii’aanii, is coming up to the Fourth World to instruct Dew after recovering in the Third World for one hundred and sixty years. She suspects a monstrous and enormous Enemy from the Hero Twins stories has returned and is stealing water from all of the Navajo Nation. In their search for the Modern Enemy, Nathan, Edward, Dew, and Yitoo must confront their past and their inner selves if they are to save the Fourth World from a devastating disaster. 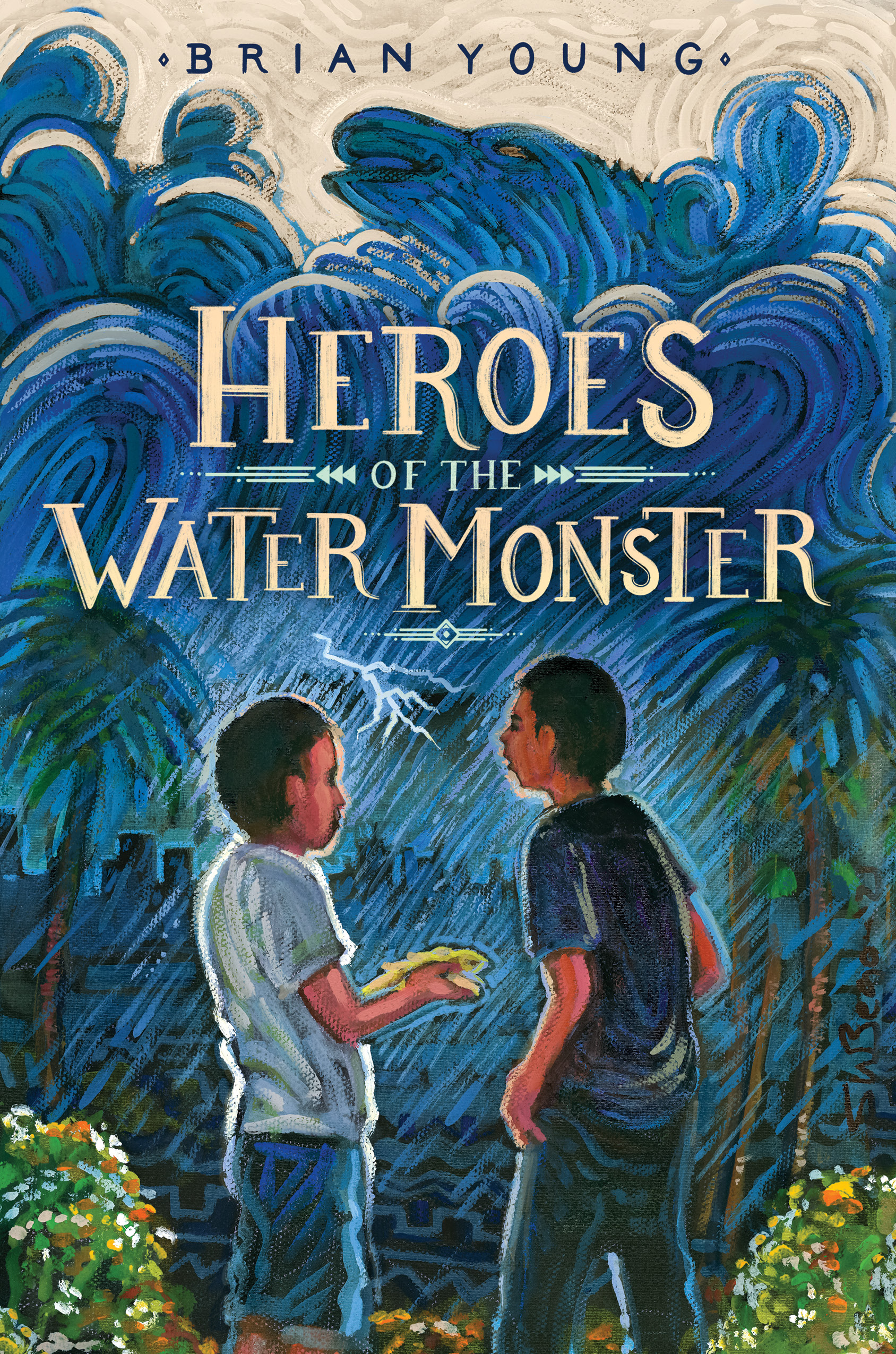 What are you most excited to share with readers with this book? Is there anything you included purely for yourself?

I am so very excited to see how Nathan has grown from the first book. He’s essentially a water-bender! Nathan has come a very long way from the shy self-doubting boy and is growing into a confident and caring young man. Even with all his growth, he still is going to be facing his toughest challenge yet!

I did include a lot of actions purely because I thought it would be cool to see Nathan influence water. Towards the end, and I don’t want to spoil it, there are some exciting things he does with water.

Did you always plan this as a series? Did a companion story present itself to you organically?

I didn’t actually. I love the idea of doing things in four because that number is sacred in Diné teachings and philosophies. The notion of four was in the back of my mind, but when I was writing Healer, it was always going to be a solo book. And this follow-up, Heroes, feels very much like its own entity. While it is a direct continuation of Healer, I wanted people to be able to pick it up and read it and not feel like they are missing important information from the first book.

The story for Heroes came to me when I was doing a revision for Healer. There is a water monster that Nathan encounters towards the end of the book that asks about her river. I did the same character building exercises that I’d done with Nathan with her and found an amazing backstory that needed to be expanded upon.

In your experience, what have been the main differences between writing a first book and writing a companion book?

I feel that I’m more confident, but the timeline is much more condensed. Whereas with Healer I had written it in seven years, this was done in two. I know myself more as a writer now that I did when writing my book and have been able to use that knowledge to try different things and use different literary tool sets that I wasn’t comfortable with.

How would you describe this book in three words?

Yitoo continued. “Ah, I see you aren’t able to speak Diné without the aid of a communication stone. Yet, you also don’t scare easily. You may not be much of a guardian now, but that only means you have plenty of room for growth.” The corner of her lips curled. She smiled at him!

“I work out almost every day, and I run in the morning,” Edward said, feeling a need to impress her.

“You run in the morning?” Yitoo asked. Her eyes sparkled with interest.

“Yes!” Edward said. “Mostly when my dad has time. He told me that Diné used to run in the morning in the old times to remember and honor the Warrior Twins.”

“That they did,” Yitoo said. “Though I prefer to call them the Hero Twins because they did more than simply fight the Enemies. Did you know their favorite running path was alongside my river?”

“They ran by your river! Did you meet them?” Edward asked. Like fireworks, excitement burst in his chest. The Warrior, oops, Hero Twins were by far his favorite of the Holy Beings! Both Enemy Slayer and Born for Water combated gigantic Enemies after the First Beings emerged into the Fourth World. When Edward was little, he sometimes pretended that he was Enemy Slayer, who would go and fight the enormous Enemies, while Born for Water would stay in their hogan sending prayers and smoke. They were the reason why he and his dad loved Kaiju movies so much!

“Of course! They would drink from my river after especially long runs.” Yitoo smiled and stared off into the distance, like she was cherishing a fond memory. “That was a different era. Young guardians,” Yitoo said, “I want to say hello to the Holy Beings of this large valley.”

“The Holy Beings of the original inhabitants of this area, before the Pale People,” Yitoo said, her face scrunched in dismay. “I want to ask their permission to be on their lands.”

If Edward understood correctly, she wanted to visit the local deities. He had no idea which Nations were here originally. There was the Pima casino just off the highway. So maybe the Pima? It wasn’t like Indigenous history was taught in public school. Even so, that was no excuse to not know whose ancestral homelands they were on.

“I’m sorry,” Nathan said. “I haven’t even given thought to whose ancestral land Phoenix is.”

“My, my,” Yitoo said, exasperated. She held her head high. “Whenever Diné leave the boundaries of the Sacred Mountains, they pray to the local Holy Beings and ask permission to set foot on their lands. It’s a gesture of respect. I certainly was grateful for prayers from any human, Diné or otherwise, when I maintained my rivers.”

Nathan said, “I’ll do some research and figure out where to meet them if we can.”

Yitoo smiled. Her voiced smoothed and her eyes twinkled. “Truth be told, Nathan, I am glad that individuals like you still exist. Not since the Era of the Hero Twins have I seen such a person as yourself.”

Jealously, Edward said, “I can research, too.” He bet that he could figure out the answer before Nathan could!

Nathan appeared to have finally caught his breath. Beads of sweat no longer popped up on his skin or his hands, which Edward was thankful for. He said, “Edward, Dew. Yitoo and I have something important to share with you.”

The atmosphere chilled in the living room. All the energy and joy of meeting Yitoo dispersed. Edward sensed that this was something dire. He asked, “What?”

“Yitoo and I went to see her river,” Nathan began.

“My river is sickly and about to dry out,” Yitoo said. “At first, we thought the low levels were from my river being diverted to the cornfields on top of the nearby plateau. But I sense foul play, as the dryness of my river, of all of Diné Bikéyah, is unnatural. Something big, something heartless, is stealing massive quantities of my water.”

“What do you mean?” Dew asked. Her tail stopped wagging and curled between her hind legs.

“I think there is an Enemy roaming around, today, in the Fourth World,” Yitoo said. “A Modern Enemy.”

Edward’s spine quivered. It was as if all the oxygen had been evacuated from the living room. An Enemy—like Thunderbird, who could summon dangerous lightning storms; like Human-Eater, who could consume entire towns; and Wild Boar, who could run at unheard-of speeds to hunt humans for hundreds of miles—was here in the modern era.

Yitoo finished, “And if we don’t confront whatever it is, it could cause horrendous damage to the Fourth World and its inhabitants.” 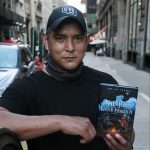 Author and filmmaker, Brian Young is a graduate of both Yale University with a Bachelor’s in Film Studies and Columbia University with a Master’s in Creative Writing Fiction. An enrolled member of the Navajo Nation, he grew up on the Navajo Reservation but now currently lives in Brooklyn, New York. As an undergraduate, Brian won a fellowship with the prestigious Sundance Ford Foundation with one of his feature length scripts. He has worked on several short films including Tsídii Nááts’íílid – Rainbow Bird and A Conversation on Race with Native Americans for the short documentary series produced by the New York Times. He was a participant of the 6th Annual Native American TV Writer’s Lab with the Native American Media Alliance, where he learned to write Television Scripts. Learn more about Brian at https://brianlyoung.com.

Previous Post: « Cover Reveal & Exclusive Excerpt for Homeland: My Father Dreams of Palestine by Hannah Moushabeck, illustrated by Reem Madooh
Next Post: NoNieqa Ramos on Latine/x Heritage and the Power of Us »
We've got new #BooksSaveLives swag in the WNDB Bon