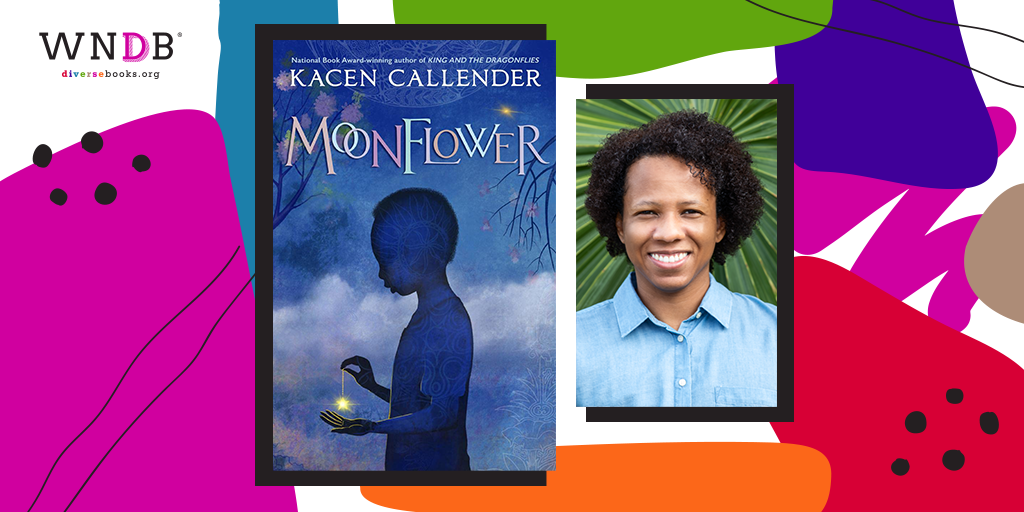 Today we’re pleased to welcome Kacen Callender back to the WNDB blog to discuss middle grade novel Moonflower, out September 6, 2022!

Moon’s depression is overwhelming. Therapy doesn’t help, and Moon is afraid that their mom hates them because they’re sad. Moon’s only escape is traveling to the spirit realms every night, where they hope they’ll never return to the world of the living again.

The spirit realm is where they have their one and only friend, Wolf, and where they’re excited to experience an infinite number of adventures. But when the realm is threatened, it’s up to Moon to save the spirit world.

With the help of celestial beings and guard­ians, Moon battles monsters and shadows, and through their journey, they begin to learn that a magical adventure of love and acceptance awaits them in the world of the living, too. 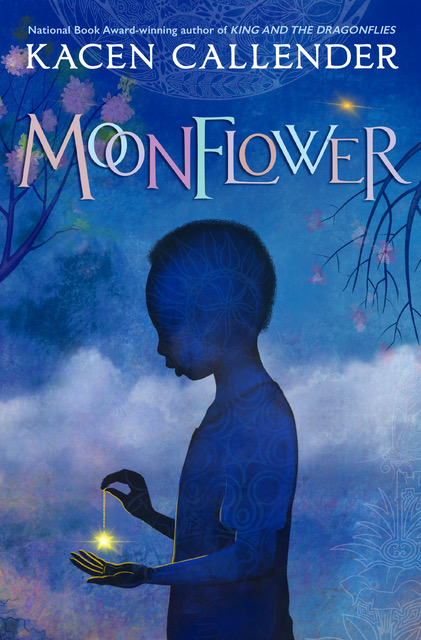 I’m always curious about a writer’s creative process and I’m especially excited to hear about your journey with Moonflower. Can you speak to the evolution of this incredible story?

Thank you! I’d set out to write a story about surviving depression and knowing that this book’s intention could not be to “heal” or “save” any reader, because each individual journey is so deeply personal. I decided to write this story for the younger me with everything I would’ve wanted to say to them, with the hope that the story and words of love might resonate for other young readers, too.

This intention first came, along with wanting to write about the spirit world—but one hiccup I ran into early on was wanting the spirit world to feel authentic to me: very ungrounded and dreamlike. Images like Wolf and the seeds in flowers came to me, and I wanted to weave it all together so that the story felt atmospheric. Feedback suggested that the book needed to be grounded in a traditional plot for the sake of readers, and Moon’s current adventure was born.

How much does the world you created (spirit realms and guardians, in particular) come from your imagination?

Initially the spirit world came from my imagination, including the idea that creativity comes from the spirit realms—and it was as I wrote the book that my own connection to spirit flourished, and in many ways was opened thanks to writing the book.

The structure of Moonflower is breathtaking—literally. As Moon moves back and forth between our world and the spirit world, as they loop back to the Keeper/Monster, the Shadow, Wolf, and their mother, and as their relationship to all of them changes, I FELT Moon’s depression. How did you create this structure?

This structure replicates my own internal healing process: realizing that, through the depression, I am and have always been so unconditionally loved simply because I exist; that people I might think of as evil and harmful like the Keeper have been through their own hurts, just like I have; that even people who are close to me, like Moon’s mother is to them, have inherited so much pain that causes them to unintentionally harm the ones they love—and that the way to healing is to stop running from everything I have learned to hate about myself and face my own shadow with unconditional love, too.

What do you think about the idea that how we tell stories is as important as what we tell? Another way to ask that, perhaps, is to ask: how much did you think about form as opposed to content as you wrote Moonflower?

This answer changes with every book I write, but with Moonflower the content was most important because of its intention of sharing healing words to my past self, with the hope that it might resonate for others. Sometimes the energy of the words and story and characters leaves a longer lasting effect than form.

Why did you choose to title your chapters after plants, flowers, and trees? How did you decide which title connected to each chapter?

Each plant either has healing properties that are reflected in the chapter or are fun easter eggs connected to Moon’s adventure. 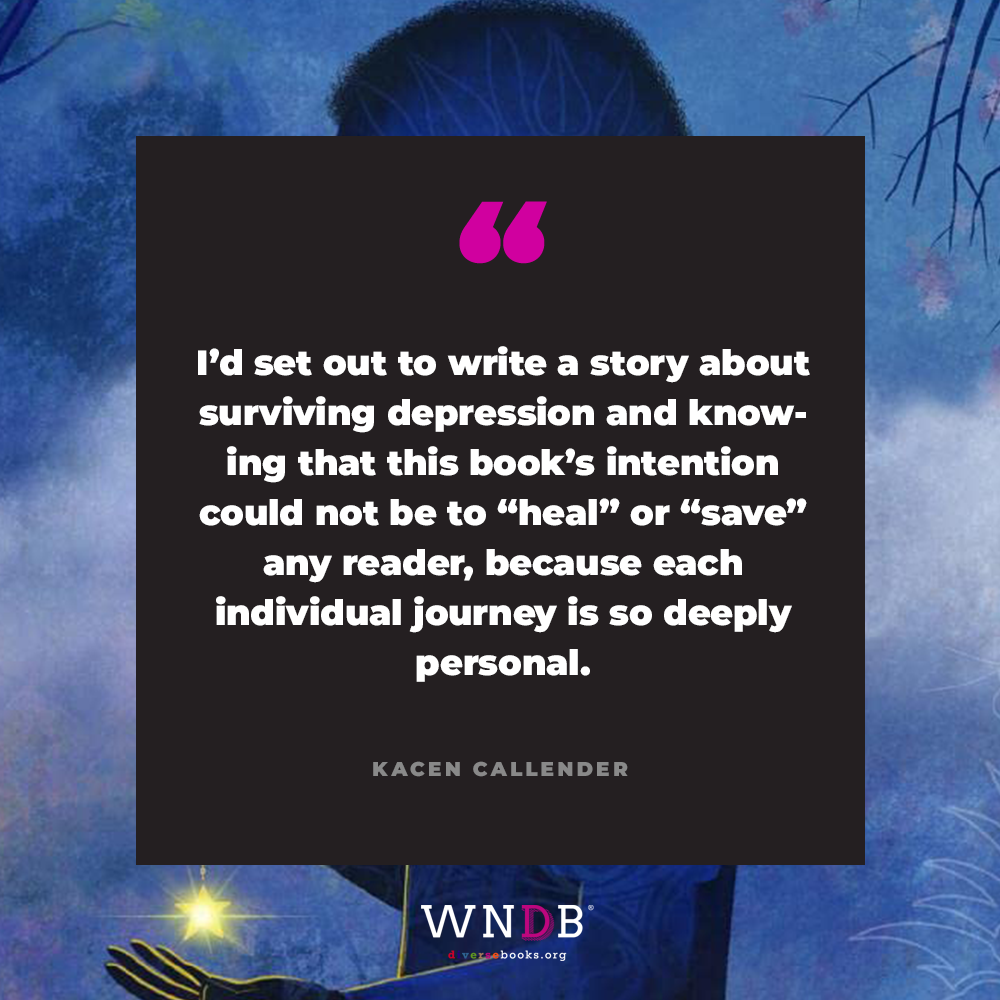 Moon moves from wishing to cease to exist in our world, to wanting to let go of the fear of being different, to feeling like they might deserve love regardless of who they are, to finally feeling real love for their exact self. Why did you highlight those parts of their evolution?

These are the highlights that have helped me most in my own healing. These lessons have been cyclical and come up again and again to help me learn at an even deeper level than before to let go of the fear, to know I am deserving of unconditional love, to feeling that same love for myself.

Depression is one of those subjects that is sometimes seen as taboo, especially for younger kids. “Don’t talk about it, it’s too intense” or “What if you cause someone to fall into depression by talking about it?” Moonflower is remarkable in its head-on approach to depression (you don’t make it smaller than it is, and you don’t talk around it) while also being so child-like in Moon’s lived experience of it. Can you talk about the reasons behind those choices?

Whether discussed and written about or not, depression will still exist. Young people will still have depression and suicidal thoughts and die by suicide. Looking away from this fact and trying to hide it away is more about ourselves as adults—our own comfort, and not wanting to feel uncomfortable with another person’s pain. I wanted to be careful not to trigger young readers, and to have constant insistence from beings like Wolf that Moon’s pain is real and valid—it should not be dismissed—and that there’s also so much love and joy waiting for them in the world of living.

Why did you include Moon’s story about Blue and the Magician?

Moon receives ideas and stories from the spirit realm and realizes that the Keeper’s story has been the one that Moon was writing in their journal all along. Moon realizes that the Keeper is still the innocent Blue that needs healing and love, too. It’s been important for me in my own healing to realize that the people who have harmed me, who I have thought of as “monsters,” also have an inner child like Blue who have not received what they needed to heal. While accountability remains important, having compassion for the people I have thought of as monsters in my life has given me release.

In another interview here at WNDB, you said, “I do strongly believe that, if craft is studied and honored and a person is writing from their heart, for a specific purpose of helping others feel seen or learn empathy, nothing will stop that book from making its way into the world.” This resonates for me deeply and I wonder if you can talk more about the relationship between writing from your heart and helping others feel seen or learn empathy. How do those intersect?

I’m glad! Writing from the heart for me means writing from the perspective that we’re all worthy of unconditional love and the understanding that we are all reflections of one another. To write with the realization that no human being is a monster—that we all have innocent, hurt children inside—and that, even with the need for accountability, we are all worthy of love is empathy. For me, anything that connects humans to one another with love and empathy touches something that resonates deeply within each of us, and those stories tend to rise.

Are there any other books you recommend for exploring depression?

Yes—Some Kind of Happiness by Claire LeGrande was another MG exploring depression I came across while writing Moonflower.

Kacen Callender is a bestselling and award-winning author of multiple novels for children, teens, and adults, including the National Book Award-winning King and the Dragonflies and the bestselling novel Felix Ever After. Kacen enjoys playing RPG video games, practicing their art, and focusing on healing and growth in their free time. They currently reside in Los Angeles, California. 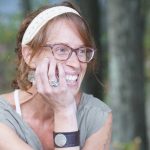 Tamara Ellis Smith is a children’s book author who lives in Vermont with her pretty large family—consisting of humans, dogs, cats, chickens, and a mouse. Her middle grade novel Another Kind of Hurricane was a Bank Street Best Book of the Year and a Vermont Book Award Finalist. Kirkus kindly suggested that her picture book Here and There is “needed everywhere.” Her second picture book Grief is an Elephant is coming from Chronicle Books in 2023. When Tam isn’t writing, she can be found running on a river trail with her dogs. Visit her online at tamaraellissmith.com or on Instagram at @tamaraellissmith.

Previous Post: « Q&A With Will Taylor, The Language of Seabirds
Next Post: WNDB Announces Mentors for Eighth Year of Mentorship Program »
Today on the WNDB blog: a debut picture book about