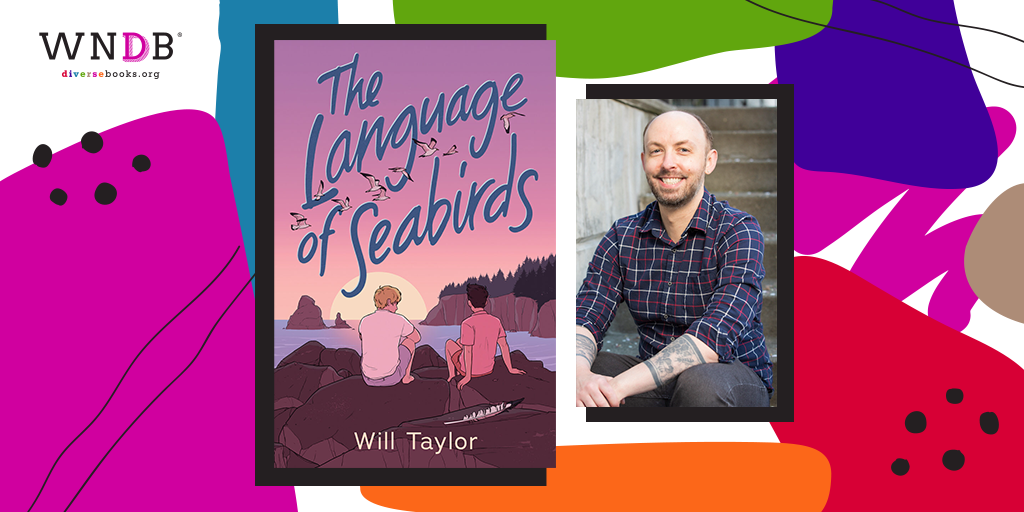 Today we’re pleased to welcome Will Taylor to the WNDB blog to discuss middle grade novel The Language of Seabirds, out July 19, 2022! We previously revealed the cover for this book here.

Jeremy is not excited about the prospect of spending the summer with his dad and his uncle in a seaside cabin in Oregon. It’s the first summer after his parents’ divorce, and he hasn’t exactly been seeking alone time with his dad. He doesn’t have a choice, though, so he goes… and on his first day takes a walk on the beach and finds himself intrigued by a boy his age running by. Eventually, he and Runner Boy (Evan) meet—and what starts out as friendship blooms into something neither boy is expecting… and also something both boys have been secretly hoping for. 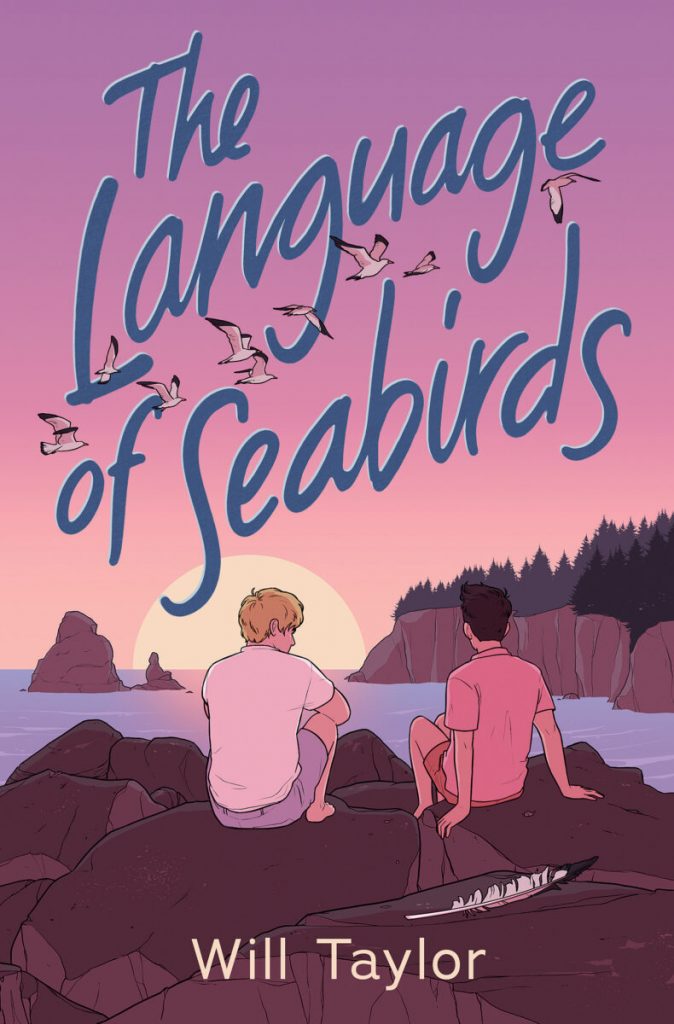 For WNDB, you wrote “I was twelve when I first experienced romantic feelings for another boy, feelings that were instantly eclipsed by the terror that I would be caught and found out.” What was rewarding about writing Jeremy’s and Evan’s story?

My goal with Seabirds was to go back to that exact moment and explore what might have happened if I’d taken another path. I realized I was gay when I was twelve but didn’t tell anyone or act on it until I was twenty-three. There’s no right or wrong way to decide when or if to come out, of course, but as I grew into a queer adult, I often wondered how my life might have looked if twelve-year-old me had been in a position to choose differently.

It was certainly emotional to watch Jeremy doing what I didn’t, taking risks and pushing his own boundaries, following his heart and accepting that it was just going to be scary at first. Early on in the writing process I realized he was braver than me, so it was his story not mine, but it was incredibly rewarding to get to experience an alternate version of my own history through him.

You captured all the worried and vulnerable moments of early crushes and big feelings so well. What was it like to be back in that 12 year old mind, in Jeremy’s head?

Aw, thanks so much! I definitely enjoyed it, since I got to go into those dreamy, sweet, chest-filling feels again and revel in them this time around. I was an extravagantly romantic kid once: My favorite movies were Strictly Ballroom and Much Ado About Nothing, I never missed the call-in dedication show Lights Out on our local soft rock radio station, and I memorized a handful of Shakespeare’s sonnets just to have them on hand.

So it was bittersweet remembering how much I used to love the idea of love before I found a reason to be scared of it. I like to think I did a bit of reclaiming along the way, though.

Writing the book also gave me a reason to put together a super heart-achy early-90s playlist for inspiration, and now those songs remind me of the time I spent working on Seabirds as much as my childhood, so that’s another win.

What were some of the challenges that came with writing Jeremy’s complicated relationship with his dad?

I think the hardest part was keeping Jeremy’s understanding of his father front and center, not mine. I’m about the same age as his father would be, and I found myself relating to him, or at least empathizing with his position, more than a pre-teen likely would. My editor had to ask me to pull back in several places, separating myself from the grownup perspective. That was a challenge for sure.

It was also difficult to write some of the conflict scenes between them since I never wanted to put Jeremy though hard times. Of course I knew I had to; it was just that unstable parenting can feel such a specific kind of horrible (to write as well as read). But that was my story, and I knew Jeremy would end up happier than he was at the start, and the only way out was through.

The relationship between Jeremy and his dad is definitely the B-plot of this book, and I hope I gave it enough life and room on the page to feel real without encroaching on the giddy romance at the heart of the story. It was a tricky balance to attempt. 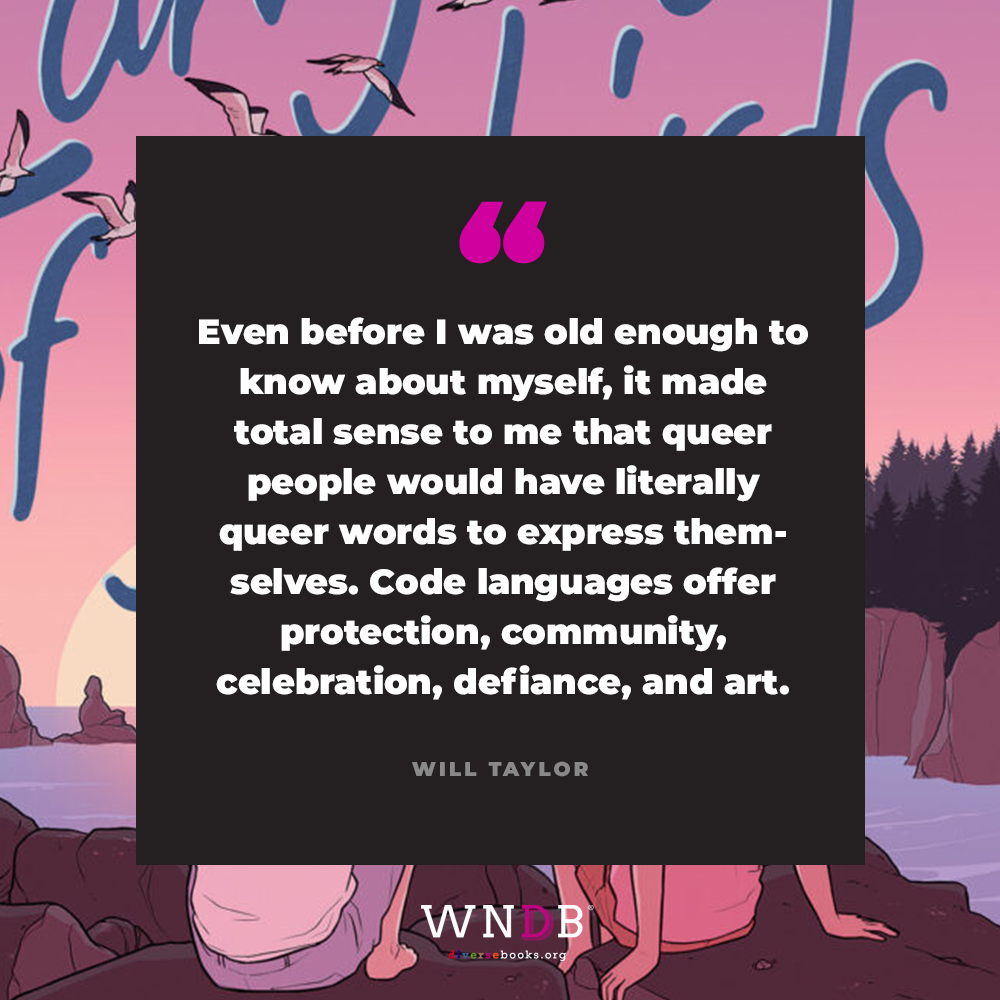 Jeremy’s and Evan’s secret language is what connects them to the wider world. What do you think is the importance of queer people finding those code languages?

Coding is a way to build and create your own fold of reality, or to join one if you’re learning an existing system. It can offer a powerful way to stay safe, as well as a way to celebrate who you are amid a larger, fundamentally different social culture. My dad is British, and I grew up listening to an old BBC radio show that featured two comic gay characters who spoke in Polari, a code-language with an intricate past that became popular in queer British subcultures prior to the decriminalization of homosexuality. Even before I was old enough to know about myself, it made total sense to me that queer people would have literally queer words to express themselves. Code languages offer protection, community, celebration, defiance, and art.

If your 12 year-old self could see you now, what would he say?

Oof. I think he’d say “good job”? I hope so. It’s hard because he had so many romantic dreams, and after realizing I was gay I spent almost twelve years actively suppressing and fighting down those feelings. I got really good at it. Even though I stopped over a decade ago, those brain pathways and emotional habits are still taking a long time to heal over and rebuild. A lot of the work of my adult life so far has been trying to retrain myself to experience romance and attraction as good things, not threats. (I’ve talked about this with many queer friends from my generation, and almost every single one has related. We all learned some form of emotional self-harm as a tradeoff for safety, and we’re all trying to undo that work now.)

On the plus side, twelve-year-old me would think it’s great that I’m a professional children’s author. That would make him super happy. Pretty sure he’d also like my tattoos ☺

Do you have any advice for young, queer, and/or questioning kid readers?

This question breaks my heart given the hate being directed at those kids and the grownups trying to support them right now. This isn’t advice per se, but please know that there are so many people like you out there, and that we are so, so proud of you. Everything you are feeling is important, and precious, and we are working hard to try and make the world better so you can grow into the art and joy and happiness that are your birthright.

To borrow the last line from my own acknowledgements page: You are the seabird on the wind, kids. You are the dream and the reason.

Will Taylor is a reader, writer, and honeybee fan. He lives in the heart of downtown Seattle surrounded by all the seagulls and not quite too many teacups. When not writing he can be found searching for the perfect bakery, talking to trees in parks, and completely losing his cool when he meets longhaired dachshunds. His books include Maggie & Abby’s Neverending Pillow Fort; Maggie & Abby and the Shipwreck Treehouse; Slimed; Catch That Dog!; and The Language of Seabirds.