WNDB wishes a happy Hanukkah to those who celebrate! Below, here are ten books that highlight this holiday: 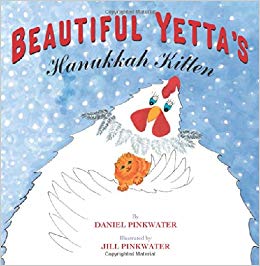 In Beautiful Yetta’s Hanukkah Kitten, Yetta manages to escape from the butcher’s shop but now she is lost in Brooklyn — a strange place filled with rude rats and dangerous buses! Inspired by real events, this multilingual story written by Daniel Pinkwater and illustrated by Jill Pinkwater is a witty, warm, and wonderful read-aloud for any age. 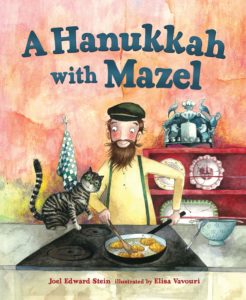 Misha, a poor artist, has no one to celebrate Hanukkah with until he discovers a hungry cat in his barn. The lucky little cat, whom Misha names Mazel, inspires Misha to turn each night of Hanukkah into something special. He doesn’t have money for Hanukkah candles, but he can use his artistic skills to bring light to his home — as Mazel brings good luck to his life. A Hanukkah with Mazel is written by Joel Edward Stein and illustrated by Elisa Vavouri. 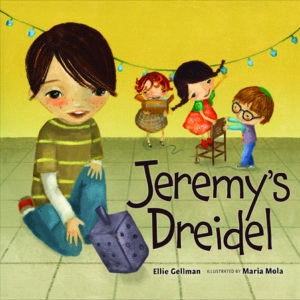 At the dreidel-making workshop, Jeremy’s friends think he’s molding a secret code on his clay dreidel. But he’s really making a special gift for his father, who is blind. How will he get his friends to appreciate his special dreidel? Jeremy’s Dreidel is written by Ellie B. Gellman and illustrated by Maria Mola. 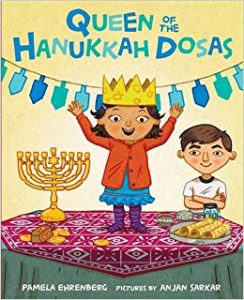 In this sweet and humorous picture book written by Pamela Ehrenberg and illustrated by Anjan Sarkar, Queen of the Hanukkah Dosas, a multi-cultural family (Mom’s Indian; Dad’s Jewish) celebrate Hanukkah while incorporating traditional Indian food. Instead of latkes, this family celebrates Hanukkah with tasty Indian dosas. To her brother’s chagrin, little Sadie won’t stop climbing on everything both at home and at the Indian grocery store, even while preparing the dosas. As the family puts the finishing touches on their holiday preparations, they accidentally get locked out of the house. Sadie and her climbing skills just may be exactly what is needed to save the day. 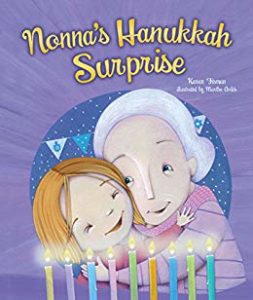 Rachel loves visiting her Italian grandmother, even though Nonna celebrates Christmas and Rachel and her parents celebrate Hanukkah. Rachel plans to share Hanukkah with her whole family, so when Rachel’s special hanukkiah goes missing, Nonna steps in to save the day. Nonna’s Hanukkah Surprise is written by Karen Fisman and illustrated by Martha Graciela Aviles. 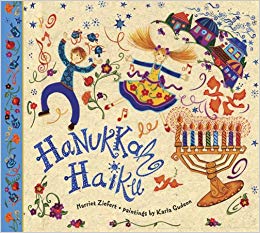 Hanukkah Haiku, written by Harriet Ziefert and illustrated by Karla Gudeon, uses the traditional Japanese poetic form to celebrate the eight nights of Hanukkah. There’s one haiku for each night, and stepped pages add one candle to the menorah every time the page is turned. 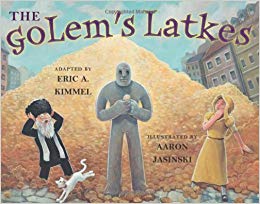 In The Golem’s Latkes on the first night of Hanukkah, Rabbi Judah has too much to do and too little time to do it. Before the rabbi leaves to visit the emperor, he tells his housemaid Basha that she can ask the golem to help. While the golem makes latkes, Basha decides to visit a friend. Basha is having so much fun with her friend, she doesn’t realize that latkes are pouring out of the rabbi’s house, sending people running! Will Rabbi Judah come up with a solution to control the golem before it’s too late? Written by Eric A. Kimmel and illustrated by Aaron Jasinski. 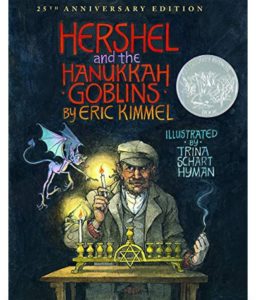 An original adventure featuring a traditional Jewish folk hero, Hershel and the Hanukkah Goblins (written by Eric Kimmel and illustrated by Trina Schart Hyman) has been a family favorite for decades and was named a Caldecott Honor book when it was originally published. Hyman’s leering goblins are equal parts terrifying and ridiculous as they match wits with Hershel, trying to keep him from lighting the menorah and celebrating Hanukkah. 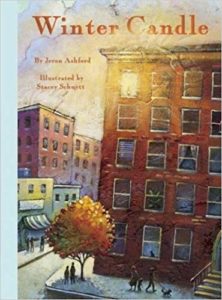 When each family at the diverse Juniper Court apartment complex needs something to light up the dark of winter, the stumpy, lumpy candle provides a glow brighter than the fanciest taper, revealing the true spirit of each holiday it illuminates. Written by Jeron Ashford and illustrated by Stacey Schuett, Winter Candle touches upon multiple winter holidays, including Hanukkah. 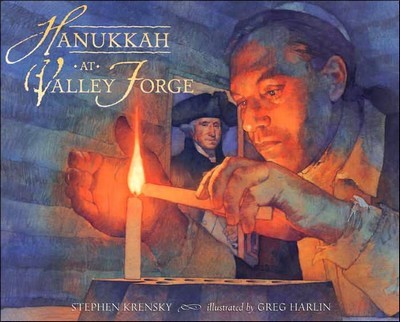 A soldier tells George Washington the miraculous story of how a ragtag army of Jewish soldiers defeated a much larger force of powerful Greeks, a tale that provides just the kind of inspiration the General needs. Quietly beautiful watercolor illustrations draw a visual distinction between the frigid blue Pennsylvania night and the golden light of ancient Israel, which is further reflected in the warm glow of the Hanukkah candles. Hanukkah at Valley Forge is written by Stephen Krensky and illustrated by Greg Harlin.

Previous Post: « WNDB Announces the 5 Recipients of the 2018 Walter Grants
Next Post: Q&A with Raakhee Mirchandani: SUPER SATYA SAVES THE DAY »
Applications are open for Literary Agents of Chang