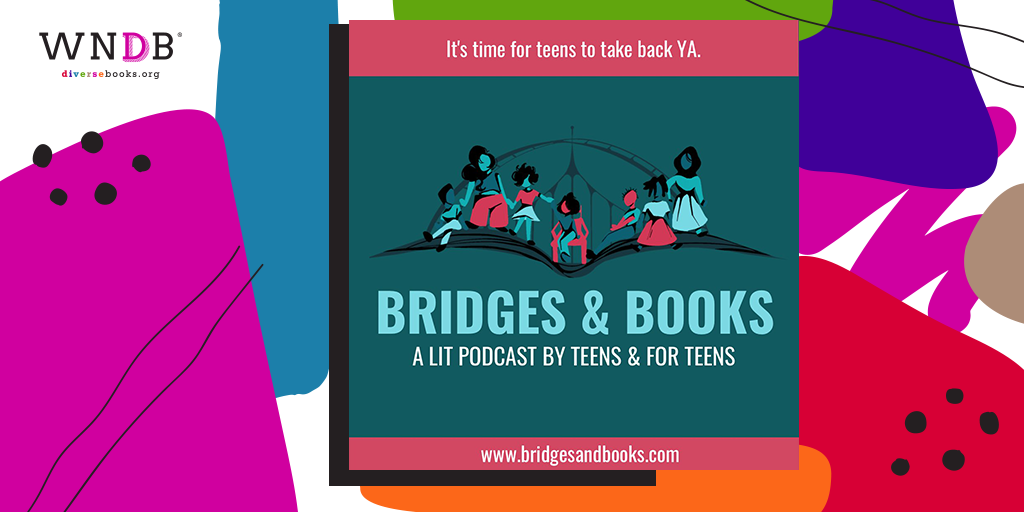 Teens talking about why they’ve closed books in the middle of reading. Authors discussing their favorite literary tropes. Histories of famous bridges around the world paired with a book recommendation.

You’ll hear all this and more in the new YA literary podcast Bridges & Books, one of the first and only teen literature podcasts created and hosted by teens and for teens. “Because who better to understand teens than teens themselves?” they ask in the intro. Developed in Pittsburgh, the City of Bridges, the podcast aims to highlight diverse teen literature, amplify authors from historically marginalized backgrounds, and celebrate the perspectives and voices of real teens. The first season is packed full of interviews with a variety of YA authors, including Elise Bryant, Joan He, Rhiannon Richardson, Ryan La Sala, and more.

I was thrilled to talk to some of the teens from the podcast about their experience, including Alli, Katie, Molly, Riley, Robin, Sarah, and Vanessa—not on the call were AnnaJean, Frances, and Tobi. That’s ten teens in all who have been working together to produce Season 1 and there will be more joining the team for Season 2, ranging in age from 12-19. They joined for a lot of different reasons, including wanting to create a teen-centered bookish community, encourage diverse reading, and make space to talk about the things that are important to them. As they reminded me, teens have limited independence and opportunity. They don’t always have people they can talk to about what’s going on in their lives, so they often turn to books to find connections and expand their ideas of what is possible. Vanessa said, “We cover a lot of different topics [on the podcast] that maybe some people don’t really talk a lot about in other aspects of their life. And I think it is so important that we cover it in such a fun and different way through books.” Overall, they hope that by discussing YA books from a teen perspective, the podcast will be that space for other teens as well as “open up conversation and dialogue about problems, wants, and needs within YA as a whole,” said Riley.

Bridges & Books started at the suggestion of one of the teens, Molly. She had previously served on a team of Teen Ambassadors who co-planned Bookish in the ‘Burgh, a two-day teen book festival in Pittsburgh. Created by author and teaching artist Kelsey L. Ford, the festival aimed to connect acclaimed authors of teen literature with their readers. When the festival was canceled last year due to the COVID-19 pandemic, Molly reached out to Kelsey with the idea to start a new project centered around a YA podcast. “I was really advocating for it because I’ve always loved podcasts and I’ve always wanted to start one,” shared Molly. “I liked the idea that I could find other people my age who are also teens and connect with them around something that I love to do, which is reading.” As an advocate for teen leaders, Kelsey took on the role of adult advisor and reached out to her networks to find more teens who might be interested. A flood of applications came in from teens in Pittsburgh eager for a bookish community to call their own, and Bridges & Books was born!

When the team first got together, only a few knew each other in real life and none had ever produced a podcast. Before they even started thinking about interviewing authors, they spent time writing the mission, vision, and values for the project. They talked about their favorite books and authors, listened to other podcasts for inspiration, and watched MasterClass videos. They even practiced interviews with adult volunteers so they could get comfortable interviewing adults, then used the audio to practice their editing skills.

Finally, the teens were ready to go into production. Eager to tell me about what goes on behind the scenes, I learned that the work of Bridges & Books is split up into five committees: Artistic Programming & Logistics, which manages all the logistics and keeps the other committees on track with their tasks; Communications, which handles community engagement and social media; Scriptwriting & Research, which researches the featured authors, reads their books, and come up with initial question ideas for the hosts; Hosting & Interviewing, which does all the speaking on the episodes and interviews the guests; and Production & Editing, which records the interviews and edits them all together into a final finished product. As you can see, it’s a lot of work to make this podcast happen, and as Riley told me, “I could not imagine attempting to do any of this by myself. It’s great that there’s so many of us here. We all play an important role—no one committee can work by itself. We would not be releasing these episodes now if we didn’t work so well together to push the podcast into being something people can listen to.”

Each episode starts out with a short discussion between the hosts about themes from the YA books of the authors they are hosting before moving into the interviews themselves. While initially awed, Molly said, “The more we talk to them, I just feel a great connection to them and realize how human they are. Especially as we talk about the writing process. There’s a lot to learn from these authors who have gone through the same struggles as us teen writers. There’s a lot to be starstruck by but there’s also a lot to learn.” Together, they talk about everything from religion to social media to queer joy. They also reflect on the book world in general, including how to overcome writer’s block, navigating the publishing process, and the importance of creating a new literary canon that fills in the gaps of YA. The teens said it has been great to build a personal connection to the authors they read. “I had read Romina Garber and Ashley Woodfolk’s books before, but after I got to meet them and talk to them, I felt like I fell in love with their stories more,” said Sarah. “It’s so great to interview the authors and hear from them personally, especially as a teenager going through some of the things that we read in their books. We’re just connecting with and loving the stories.” 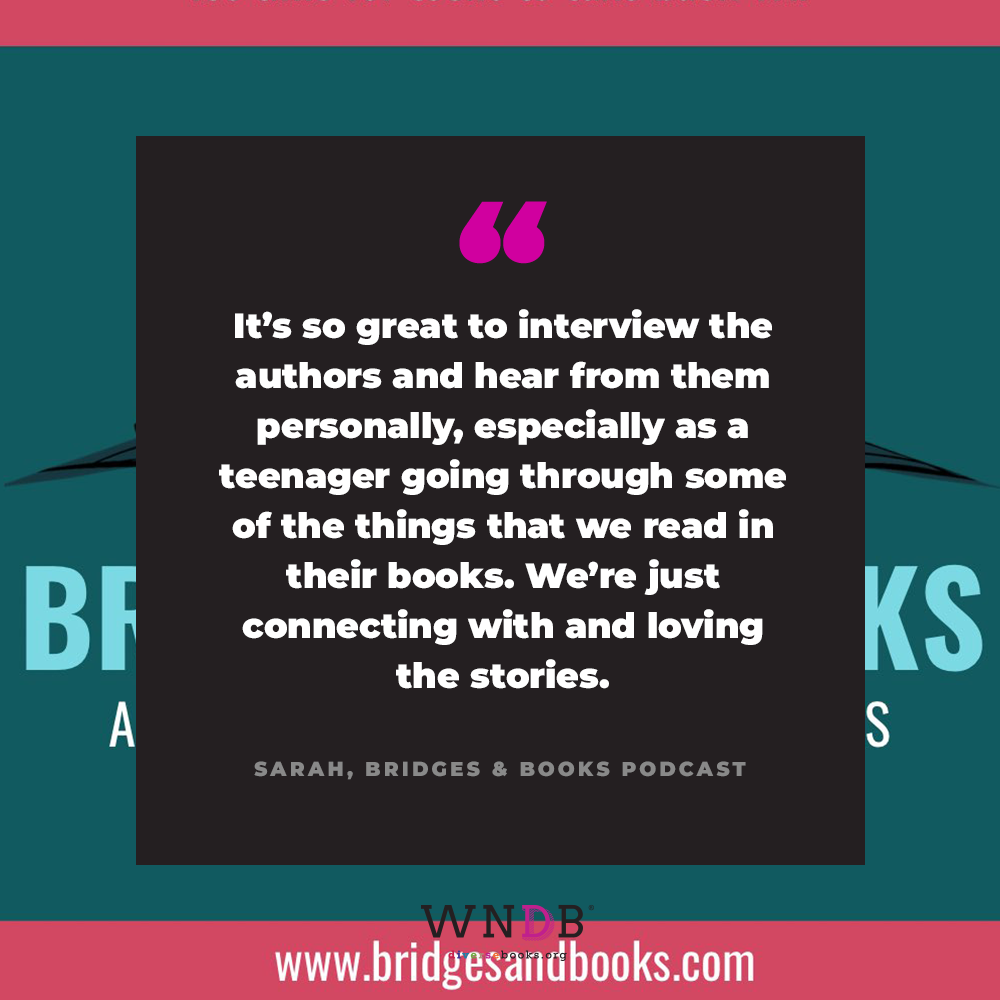 After they’re interviewed, the authors get to ask the teens a few questions of their own. Granted the opportunity to hear directly from their intended audience, many ask what the teens want to see more of in YA. Answers vary widely, from wanting stories featuring periods and driving anxiety to stories exploring racism and mental health. They want to read about younger characters who are just starting high school as well as older teens who are going through their first year of college. Some wanted multi-crush romances and others wanted no romance at all. As Robin explained, “Being a teen isn’t one thing. There are a thousand different experiences. And if I don’t relate to something, someone else might still relate to it.” But they all agreed that they want more diversity in the YA they read—and not just diversity in identities, but diversity of experiences within and beyond identities. Riley believes, “There should be a book for everyone out there. And we’re giving out a call to that through the podcast.”

At the time of writing, the podcast, only halfway through its first season, has over 500 downloads with nearly 800 listens on popular platforms like Apple Podcasts and Spotify. As the teens’ long-time personal cheerleader, Kelsey is not surprised by the response. She said, “The best part about supporting the teens developing Bridges & Books is seeing other adults in the world take them seriously and learn what they are capable of.” She has loved seeing the teens’ confidence grow as they explore their interests, practice new skills, and get positive feedback from their audience.

Many of the authors they interviewed said it was one of the best interviews they had ever done. Adiba Jaigirdar, author of the The Henna Wars and Hani and Ishu’s Guide to Fake Dating, was interviewed by Tobi and Riley for Episode 5 in which they talked about author friendships, cultural appropriation, and South Asian LGBTQ+ representation in YA. About the experience, Adiba said, “It felt like a rare opportunity to interact with the very people that I had written my books for—teens, which has been especially difficult during this pandemic. It was also a rare opportunity to ask the teen hosts questions about themselves and their opinions on YA, among other things. Overall, it was just a valuable conversation, and an opportunity to make connections that aren’t always easy to come by as authors of YA.”

The teens cannot believe the podcast is finally out there. Alli said, “I think I’ve really learned just how powerful teens are. I knew we could get this done, I knew we’d be able to. But seeing it come together and already having so many people who have listened and downloaded it … hosting these interviews and realizing we’re reaching people … I knew it would happen but I didn’t realize how well it would happen. And that just really excites me. To see what we can get done when we work together. And what that says for our generation and what we’ll do in the world.”

You can listen to Bridges & Books on Apple Podcasts, Spotify, or on their website. And you don’t have to be a teen to tune in! As Riley reminded me, “We always say it’s by teens for teens, but adults can listen too. If you love YA and you just want to learn more about what teens think about the books we read and what we want from what we’re reading, then go ahead and listen!” 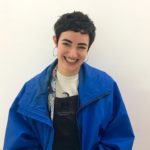