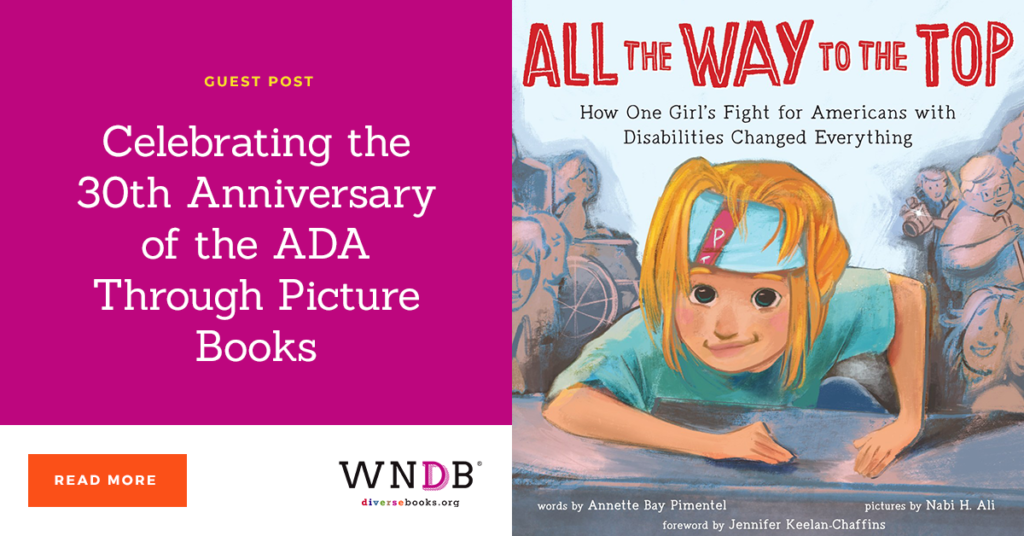 All the Way to the Top: How One Girl’s Fight for Americans with Disabilities Changed Everything by Annette Bay Pimentel, illustrated by Nabigal-Nayagam Haider Ali, is on sale now. Order it here.

I realized that gave me a superpower: I didn’t have to confer with experts or read historical tomes to know what mattered. I could just remember.

I knew the answer right away. The Americans with Disabilities Act passed in 1990, and since then, it has changed physical places in the U.S. Even more importantly, it has transformed our expectations about how people with disabilities participate in public life.

But how could I write about a law without being boring?

I dove into the details of how the law was written and how it came to be passed, and I found Jennifer Keelan.

By the time I was eight years old, I was a seasoned disability rights activist. I had already attended many protests in many cities across the U.S. and Canada.

The protest that meant the most to me, though, would be the Capitol Crawl. I knew even as a child how important the passage of the ADA would be for children like myself.

In early 1990, activists from across the country had already been testifying to Congress about the ADA’s importance, but Congress was stalling on passing the law. My family and I, as well as other activists, were all frustrated by the delays. So we gathered in Washington, DC. Activists in wheelchairs had planned a protest—the Capitol Crawl. They would climb up the steps of the U.S. Capitol, a media-friendly demonstration of the barriers we faced.

It was an unseasonably warm day for DC in March, and the cherry blossoms were starting to bloom. I had been told by some of the adults that I would not be able to participate in the crawl, and I was quite upset.  I felt that it was important that children with disabilities be represented too. That’s why I was there! I had been invited by Justin Dart Jr. and his task force, and I felt I had a mission. I was very angry and crying mad!

Rev. Wade Blank, who was one of the activist leaders and a close family friend, asked why I was upset, and we discussed my purpose and why this was important to me. He told me to do what was in my heart—so I climbed!

Jennifer’s story had it all: a transformative moment in U.S. history, a female protagonist, and a child changing the world. But I also knew this was her story, not mine. I decided I’d do the book only if she wanted to collaborate with me on telling her story. So I reached out to Jennifer.

I felt that doing the children’s book would be a great opportunity to teach children about the history of the disability rights movement and, in particular, the importance of the Capital Crawl and how it led to the passage of the ADA. I felt that the ADA’s thirtieth anniversary, which coincided with the same year the book would be released, was an important time to teach the history and to open the door to the discussion of disability rights and discrimination. I was pleased that Annette was interested in telling my story from my eight-year-old perspective, as no one had ever asked me until Annette contacted me.

I have loved promoting All the Way to the Top with Jennifer. Elementary students respond to her story. They ask her open and honest questions about living with a disability, and Jennifer responds with grace and candor.

I hope that our young readers will embrace the expectation that they will live their lives in concert with peers with disabilities.

It is important that children learn that it took years of struggle to achieve the civil rights goals intended by the ADA and other disability civil rights laws. Through the book, they have an introduction to what discrimination is. The book opens the conversation on history, civil rights, and discrimination. It teaches children to recognize discrimination and how we choose to challenge it—by demanding equal access. As the book says, “Slowest of all, minds have to change.” In other words, we still need to change the attitudinal barriers people with disabilities still face today. 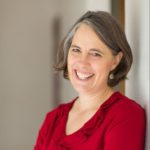 Annette Bay Pimentelhas published two picture book biographies: Mountain Chef (Charlesbridge, 2016) about a Chinese American who helped inspire the creation of the National Park Service which won the Carter G. Woodson Award, and Girl, Running (Nancy Paulson, 2018) about the first female to run the Boston Marathon, which was a JLG pick and received a starred review. Annette lives in Moscow, Idaho. Visit her online at annettebaypimentel.com. 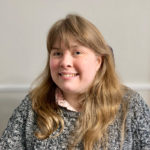 Jennifer Keelan-Chaffins joined the disability rights movement at the age of six and has been a passionate advocate ever since. In 1990, she received the Americans With Disabilities Act Award. Jennifer received her GED in 2002 before earning a B.S. in Family and Human Development from Arizona State University, which she plans to use to help children with disability rights advocacy. She lives in Colorado with her mother, Cynthia Keelan, and her service dog Mya. Visit her online at jkclegacy.com. 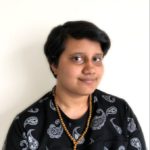 Nabi H. Ali is an illustrator of Tamil descent based in Orange County, California. He enjoys creating works that foster inclusivity and intersectionality in art and media. His hobbies include painting, researching South Asian culture, and writing poetry.

Previous Post: « Cover Reveal for A Universe of Wishes edited by Dhonielle Clayton
Next Post: I Wrote Praline Lady to Honor the Black People Behind Praline’s History »
Save the date for the #WalterAwards23! You can now