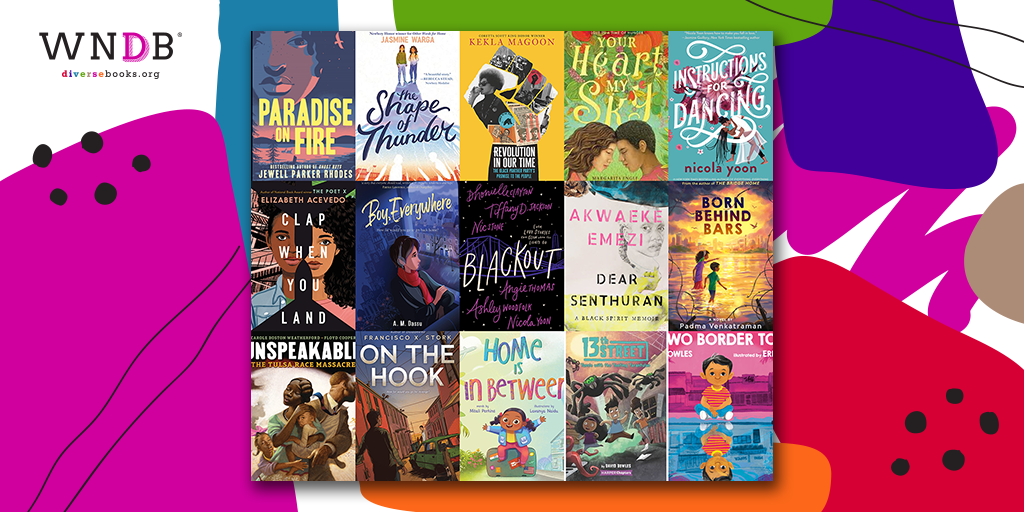 This is the first of an annual round-up, celebrating recent news from Walter Award Winners (in previous years) and WNDB mentorship award winners, and forthcoming 2021 titles from winners and honorees of the Walter Dean Myers Award.

The 2021 Walter Award-winning teen novel, Punching the Air, by Ibi Zoboi and Yusef Salaam, which was also a New York Times and USA Today Bestseller, has most recently added another accolade to the list: It is a finalist for the acclaimed Los Angeles Times Book Prize for Young Adult Literature.

The 2021 Walter Award-winning book for Younger Readers, When Stars are Scattered by Victoria Jamieson and Omar Mohamed (colors by Iman Geddy) which was also a National Book Award finalist last year, received numerous accolades this year, including a Schneider Family Book Award Honor for the Middle School category.

Mariko Tamaki, author of the 2020 Walter Award-winning novel for Teens, Laura Dean Keeps Breaking Up with Me (illustrated by Rosemary Valero O’Connell), is curating an imprint for Abrams called Surely Books, which premiers this spring. Surely Books is a graphic novel imprint dedicated to expanding the presence in the medium of LGBTQ+ creators and stories.

Padma Venkatraman, author of The Bridge Home, the 2020 Walter Award-winning novel for Younger Readers, has a forthcoming novel called Born Behind Bars that is scheduled for September 2021 release. Born Behind Bars is about a boy who is raised behind bars and fights to free his wrongfully incarcerated mother after being thrown out of jail onto the streets of an Indian city.

2019 Walter Award winner (Poet X) and 2020 Walter Award Honoree in the Teen Readers category (With the Fire on High) Elizabeth Acevedo’s novel Clap When You Land has been added to the longlist for the 2021 CILIP Carnegie Medal, the United Kingdom’s most prestigious and oldest youth literature award.

Jewell Parker Rhodes, author of Ghost Boys, the 2019 Walter Award Winner for Younger Readers, has a novel that can be preordered and is scheduled for September 2021 release, called Paradise on Fire, about six Black city kids who spend a summer out west and learn to depend on one another for companionship and strength, until a devastating forest fire threatens them.

Winner of the 2018 Walter Award for Teen Readers (Long Way Down) and the 2016 Walter Award (All American Boys) Jason Reynolds has been named the inaugural Honorary Chair for Banned Books Week 2021. This fall, the New York Times bestselling author will headline the annual celebration of the right to read.

The following Walter Honorees also have new novels published or forthcoming in 2021:

2020 Walter Honoree for Younger Readers Jasmine Warga has a forthcoming middle-grade novel, The Shape of Thunder, from Harper Collins, published in May 2021.

2019 Walter Honoree for Teen Books Tiffany Jackson is one of six contributors to and co-authors of Blackout, an interlinked novel of charming, hilarious, and heartwarming stories on Black Teen love.

2019 Walter Honoree for Younger Readers Veera Hiranandani has a forthcoming middle grade novel, entitled How to Find What You’re Not Looking For, scheduled for September 2021 release from Penguin Books.

2018 Walter Honoree for Teen Books Mitali Perkins celebrates the release of more than one title this year, including the picture book Home Is in Between and Steeped in Stories: Timeless Children’s Novels to Refresh Our Tired Souls.

2018 Walter Honoree for Teen Books Francisco X. Stork has a new novel for teens this spring, entitled On the Hook, published by Scholastic.

2018 Walter Honoree for Young Readers and 2016 Walter Honoree Margarita Engle’s latest novel, Your Heart, My Sky, was released this spring by Simon and Schuster.

2016 Walter Honoree Kekla Magoon’s Revolution in Our Time will be released in September 2021 by Candlewick Press. 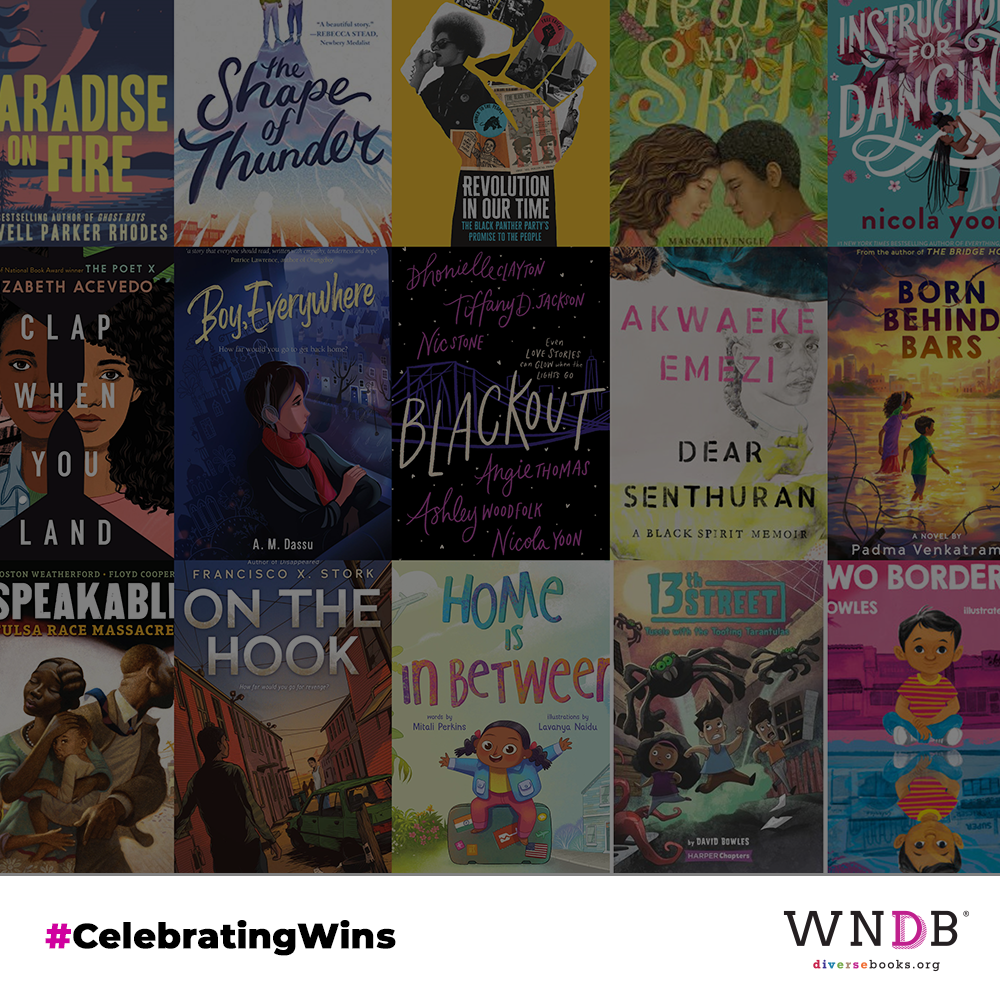 Valerie Bolling, represented by James McGowan of BookEnds Literary Agency, sold, at auction, Together We Ride and a sequel, Together We Swim to Elizabeth Lazowski at Chronicle. Kaylani Juanita will illustrate; publication is scheduled for spring 2022 and spring 2023, respectively. Valerie Bolling was one of the authors featured in The Brown Bookshelf’s “28 Days Later.”

A.M. Dassu, a WNDB 2017 mentorship winner (whose mentor was Alex Sanchez) is the author of the middle-grade novel Boy, Everywhere, a story of privilege that looks at the refugee crisis through thirteen-year-old Sami’s eyes. Released in the United Kingdom to much acclaim, it was recently released in the US by Lee and Low, and has since received three starred reviews and was chosen as an ALA Booklist top 10 debut MG novel.

Maya Prasad was a 2017 WNDB mentee in the young adult category, mentored by Padma Venkatraman. Her YA debut Fall Winter Spring Summer, which will be published by Disney-Hyperion in fall 2022, is a contemporary romance that follows the four Singh sisters over the course of four seasons as they navigate the bustle of their father’s inn on Orcas Island, where a steady stream of new guests inspires secret dreams and breathtaking kisses in the Northwest drizzle.

Revised with the guidance of Jane Yolen, 2017 Nonfiction Mentee Teresa Robeson’s debut picture book biography Queen Of Physics was published by Sterling in late 2019. It won the APALA 2020 Picture Book Award, and also received the 2019 NCTE Orbis Pictus Recommended Book designation, and was an Honor recipient of the ILA 2020 Children’s and Young Adults’ Book Award in Primary Nonfiction. 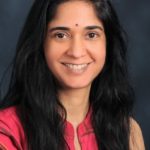 Dr. Padma Venkatraman is the author of The Bridge Home, A Time to Dance, Island’s End and Climbing The Stairs, published by Nancy Paulsen Books, Penguin Random House. Her next novel, Born Behind Bars, is scheduled for October 2021 release. The Bridge Home secured 8 starred reviews and is the winner of a Walter Dean Myers Award, South Asia Book Award, Golden Kite Award, Crystal Kite Award. Her previous novels were also released to multiple starred reviews and have won numerous honors and awards. Before becoming a full-time author, Padma Venkatraman obtained a doctorate in oceanography from the College of William and Mary, conducted research at Johns Hopkins University, and directed diversity efforts at the University of Rhode Island’s graduate school. Visit her on Twitter @padmatv; on Instagram @venkatraman.padma; or via her website: www.padmavenkatraman.com.