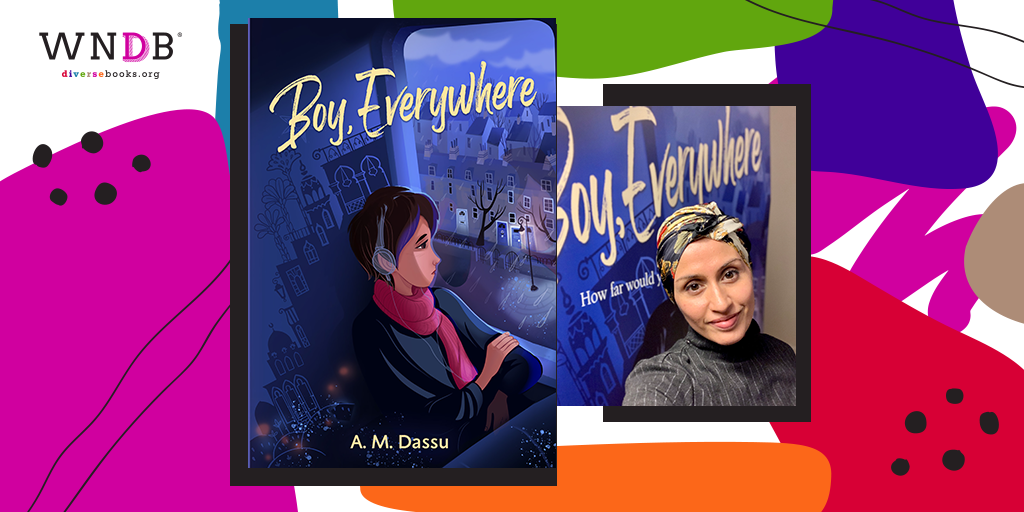 Boy, Everywhere is on sale on April 20, 2021. Order the book here! Take a look at our cover reveal for the book. A. M. Dassu was a participant in the WNDB Mentorship Program in 2017. Read an interview with the author on Lee & Low Books and watch A. M. Dassu discuss Boy, Everywhere on YouTube.

Boy, Everywhere is a story of privilege and looks at the refugee crisis from a completely new perspective, and through thirteen-year-old Sami’s eyes, shows that we are all one cruel twist of fate away from becoming refugees—it can happen to anyone.

Sami is an ordinary boy who lives a happy, normal life in Damascus in Syria; he loves gaming, makes plans with friends, has the potential to play for the school football team, has an iPad, a PlayStation, and weekends at the mall to look forward to. And in an instant, he loses it all. You follow him across countries and continents before he gets to the UK, which isn’t quite what he imagined it to be.

The key reason for writing Boy, Everywhere was to challenge stereotypes. I wanted to write a book that was different from those already published about the refugee crisis. In 2015, the war in Syria had been raging for almost five years, and the description in the news was hostile and hateful of refugees. The world struggled to help Syrians, and I sat in my comfortable living room watching countless news broadcasts about the arrival of refugees to Europe.

Boy, Everywhere was inspired by one particular interview that showed refugees in a muddy camp wearing Nike trainers, holding smartphones, talking about what they’d left behind. I realized that it could easily have been me––that if a bomb were to drop on my street, I would be that well-dressed person on my screen but with no home to go back to. It was clear their lives were very similar to ours in the West and a civil war could easily bring the same fate upon any of us.

Due to media reports at the time, many people assumed refugees were poor, uneducated, and wanted to come to Europe because they’d have a better life.

For years, we’ve only been shown grey rubble on the news, or refugees in rubber dinghies—and so it’s easy to forget that Syria is one of the oldest civilizations. There’s a perception that Syrians live in a distant desert country in tents, only wearing robes. Not many people in Western Europe and the US know that they had beautiful hotels, KFCs, Adidas stores, and Costa coffee shops before the war began. I wanted everyone to know that the lens the media put on refugees wasn’t the full story.

All this time, the focus has been on refugees not knowing English, wanting our jobs, and taking our space. I wanted to show the reality—Syrians have English-speaking schools—my friend Ahmad who is a refugee has studied English literature at Aleppo University and has read Chaucer, one of the greatest English writers, and I haven’t!

I also wanted to challenge the depiction of religious conflict and highlight that Christians and Muslims live harmoniously together in Syria because the news can make you think otherwise.

I wanted to challenge the narrative that refugees are needy and desperate and instead show the reality of their lives, the choices they’re forced to make, to explore how hard it is to leave home and show that if it weren’t for the war, most Syrians would never have left. And more importantly, the Syrian refugees I know were keen for people to know that they had good lives and were forced to leave.

I wanted the focus to be on who they were and are, their identities as Syrians, not just the temporary political status attributed to them in their new country. It was not enough to simply pick things that I felt were worthy to write about, and so I asked questions, listened, and tried to understand what felt unfair to Syrian refugees and the way they were represented in books and the media.

I really hope readers will connect with Sami and see how easily this can happen to anyone. No one sets out to become a refugee. I hope Sami’s story will bring us together, build empathy, and help to challenge stereotypes and break down barriers in our increasingly fractured society. 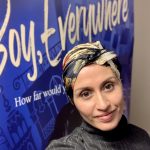 A. M. Dassu is a writer of both fiction and non-fiction books and is based in the heart of England. She is Deputy Editor of SCBWI-BI’s magazine, Words & Pictures, and a Director of Inclusive Minds, a unique organization for people who are passionate about inclusion, diversity, equality, and accessibility in children’s literature. Previously, she has worked in project management, marketing, and editorial. Her work has been published by The Huffington Post, Times Educational Supplement, SCOOP Magazine, Lee & Low Books, and DK Books. She won the international We Need Diverse Books mentorship award in 2017. A. M. Dassu has used her publishing deal advances for her debut middle grade novel Boy, Everywhere to assist Syrian refugees in her city and set up a WNDB grant to support an unpublished refugee or immigrant writer. Boy, Everywhere will be published in the UK and Commonwealth in October 2020 and USA in Spring 2021. You can find her on Twitter @a_reflective and Instagram @a.m.dassu.