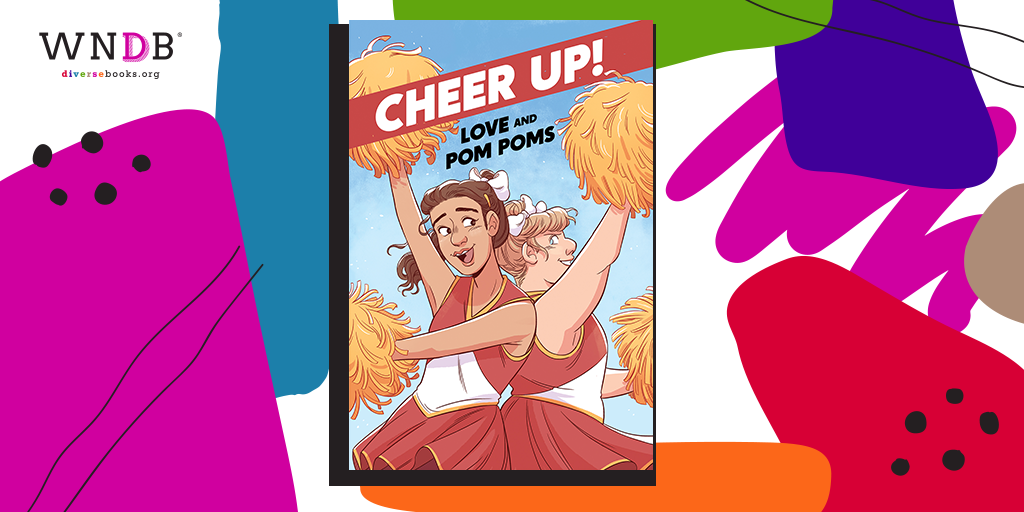 Cheer Up! Love and Pompoms by Crystal Frasier, illustrated by Val Wise, is on sale now.

Crystal Frasier and Val Wise are the author and illustrator duo behind the original graphic novel Cheer Up! Love and Pompoms (August 10, 2021), a sapphic rom-com for fans of Fence and Check! Please.

Both Frasier and Wise are trans creators, and crafting the story of Cheer Up! Love and Pompoms was a deeply personal experience for both of them as teens growing up in the south.

Wise agreed that in their partnership there was a level of trust between writer and artist that there wouldn’t necessarily be working with a cis creator. “I think there’s a level of nuance that is a lot easier to grasp when it’s closer to your own experiences,” he said.

Frasier first envisioned Cheer Up! years ago while riding an escalator at the Seattle Convention Center. When she approached Oni Press with the story idea, Frasier requested to work with a queer artist, and she considers it great luck that she was paired with Wise. When they met, they discovered they’d grown up about 20 miles from each other in the Tampa Bay area.

“Just a lot of strip malls and a lot of palm trees,” Wise laughed. “We do have a gratuitous snake bird shot [in the novel].”

“A lot of the plot details developed after Val and I met,” Frasier said. “Once Val and I started commiserating about growing up on the Gulf Coast, we were like, okay, we’re going to put this in Florida, and that’s when BeBe became Latina. It just fleshed out a lot of people, a lot of details, because we started drawing on elements from what we grew up with instead of archetypes. There was a lot we could draw on, both good and bad.“

Wise, Frasier, and I met for an early morning Zoom call in June, and we had a wonderful conversation about what it meant to both of them to be able to tell the story of Cheer Up! and their respective paths to being creatives, and the impact of teachers’ encouragement (or lack thereof) and mentorship along that path.

“…It didn’t help that most of my English teachers said, ‘This is dumb. We don’t want to read that,'” Frasier told me. “Florida public education! But a few years after I started my transition, I started doodling a comic for an email list that I was in for other young transitioners. That ended up accidentally turning into an ongoing series for six years. People liking my stupid little comic that I drew basically as therapy told me that maybe some people do like my writing and that it could help people.”

Wise was fortunate enough to find more encouragement at home and at school. “I went to a Baptist high school for the first few years, which was about as fun as it sounds. I had a teacher in my sophomore year who pulled me out of art class and put me on a guided study. He let me do whatever I wanted. I had never been encouraged or allowed to have that kind of freedom. Then once I went to college, I had this idea that I wasn’t a good writer and I could never write anything, that I should just stick to drawing stuff. But I had a professor, John Larison, who really encouraged me.”

When Frasier and Wise were working on subject material for Cheer Up! that was so close to their hearts—even geographically!—it could dig up intense emotions and even be triggering. We spoke about how the creative process for Cheer Up! was tough but ultimately therapeutic.

“It brought back a lot of my early transition fear that I’d forgotten about for years. All of the anxiety and trying to be perfect,” Frasier said. “…For me, the book was actually a kind of therapy. The tendency is to be like, ‘Oh, yeah, Florida is awful. I’m glad I got out.’ But working on the book, I remembered all these amazingly beautiful things and the really touching people I grew up with.”

Wise said, “There is trans pain in the book and in both of our lives, but it’s not the focus at the end of the day. It is about this little pocket that you can carve out as a queer and trans person where you do feel accepted and loved, even though the world as a whole is very scary…You can find pieces of love and catharsis. [Working on this book] was sometimes hard, but I think that because the ending of the book is so cathartic, working towards that happy ending made it a lot easier.” 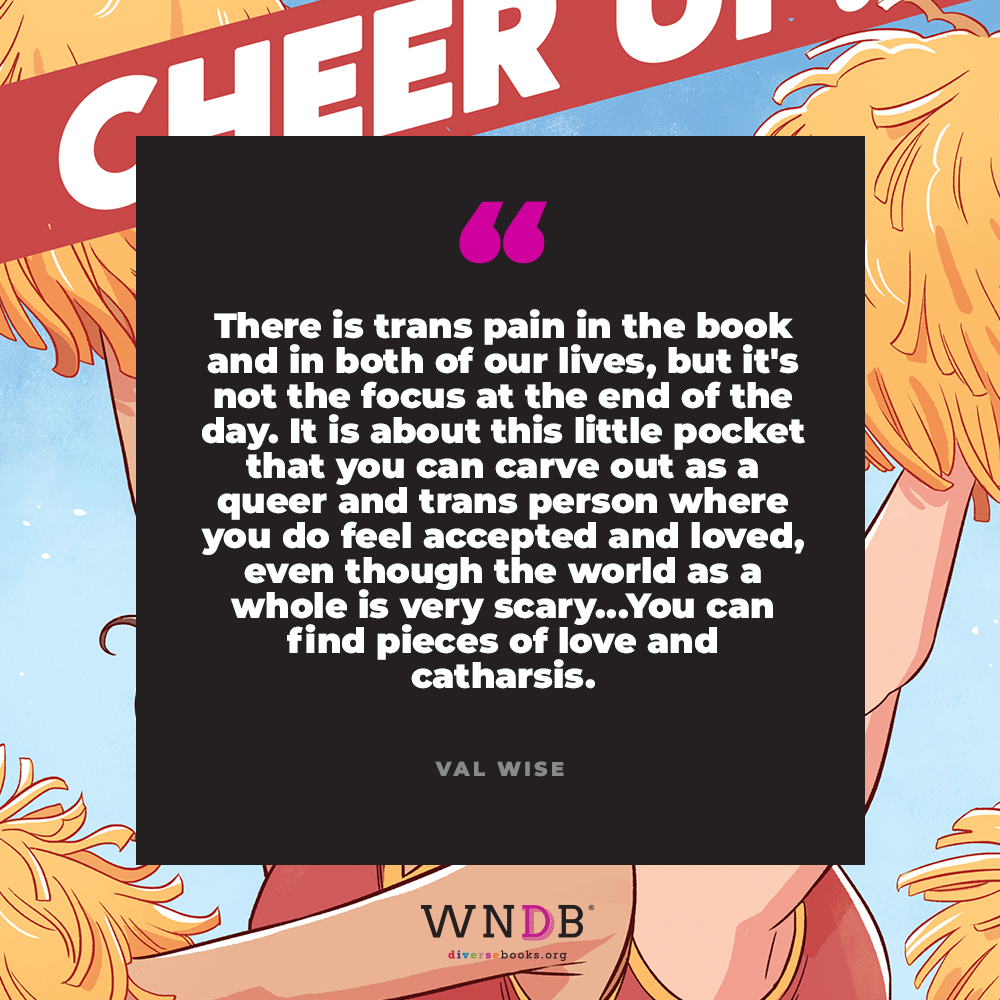 We finished our Zoom chat by discussing the pieces of art that influence Frasier and Wise’s storytelling work as creatives today. Frasier recalled, “I loved melodramatic, romantic, and Victorian poetry. So, a bunch of Emily Dickinson and Christine Rossetti and Shelley. I try to tug on the heartstrings the same way I used to read about.”

“I read Sophie Campbell’s Wet Moon when I was in middle school,” Wise said, prompting a brief round of excited noises from everyone on the Zoom call. “I think that changed the wiring in my brain. Just the way that all of the characters look—it was the first time I’d ever seen a fat protagonist in anything. I was a little fat girl in middle school, and it was really, really important to me. And it also takes place in Florida. I’ve [also] been rewatching a lot of Barbie movies recently! I just like how nice everyone is to each other, and this is something I think has also stuck with me. I like stories about people who actually do seem to care about each other.”

With Cheer Up! coming to shelves on August 10th, Both Wise and Frasier already have new creative projects on the horizon.

“I kind of have the same philosophy in my own work,” Val added, “where I don’t necessarily like to write worlds where transphobia doesn’t exist, but I do like to write those pockets of love of acceptance that trans people can find.” Val is currently working on a fantasy romance webcomic heavily influenced by 1880s central Russia.

Frasier is currently pitching more comics to Oni Press. Frasier and Val will be collaborating again in the future on a Southern Gothic horror story—an exciting change of pace after Cheer Up!, which is full of sweetness, love, and, of course, pom-poms.

“I think Val and I both went in deciding to make the comic we needed when we were teenagers,” Frasier said. 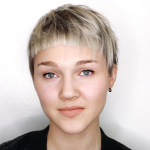 Kaley Kiermayr is a Boston-based editor, freelance writer, and marketer. She is currently an Executive Assistant at The Theater Offensive, a nonprofit that produces liberating art by, for, and about queer and trans people of color. She received her Publishing MA at Emerson College. In her downtime, she enjoys getting involved with LGBTQ+ literature and writing projects. 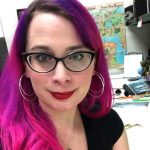 Crystal Frasier is a girl from small-town Florida who now has twenty years’ experience writing for comics, fiction, and games. She has contributed to major brands like Pathfinder and Dungeons & Dragons, as well as small-press projects and anthologies, but she got her start self-publishing transgender-focused webcomics. Today Crystal is the proud mama of two energetic corgis, Calamity and Adamant. 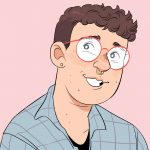 Val Wise is a cartoonist originally from Clearwater Beach, Florida. He’s contributed to a handful of anthologies, including Dates! and Wayward Kindred, as well as projects like Rolled & Told. He currently lives in the Southern U.S. with his husband, two best friends, and two talkative cats named Biscotti and Ciabatta.