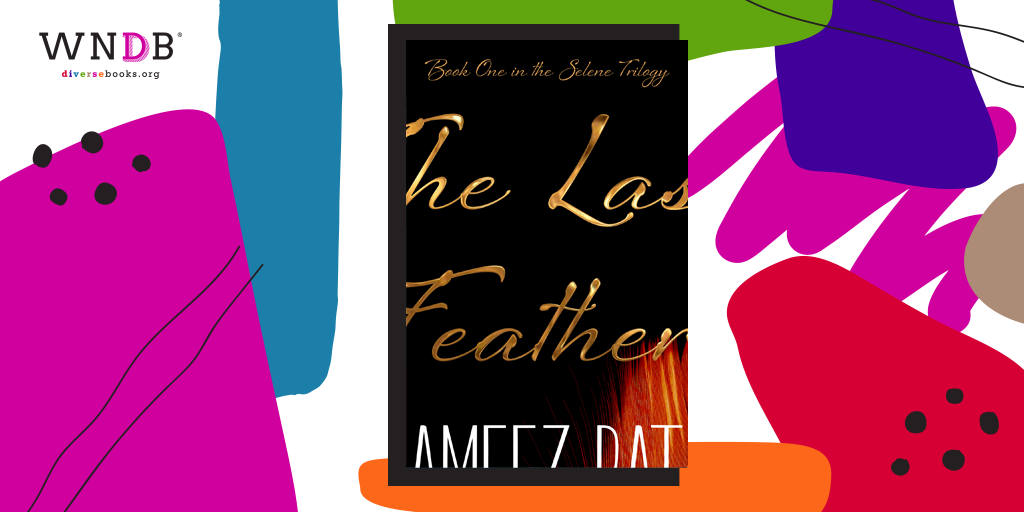 Today we’re thrilled to reveal the cover and an exclusive excerpt for The Last Feather by Shameez Patel Papathanasiou! The book will be released on July 19, 2022 by Flame Tree Press. Preorder it here.

Twenty-two-year-old Cassia’s sister is dying, and she doesn’t know why. Cassia wakes up in another realm to find her missing best friend, Lucas, who knows how to save her sister.

Lucas is part of a community of Reborns, people who were born on earth and, after death, were reborn in this realm with magical abilities. The original beings of the realm, the Firsts, rule over them.

To keep the Reborn numbers manageable, the king of the Firsts releases a curse to cull them. Cassia needs to break the curse before her time runs out and she is trapped there forever. 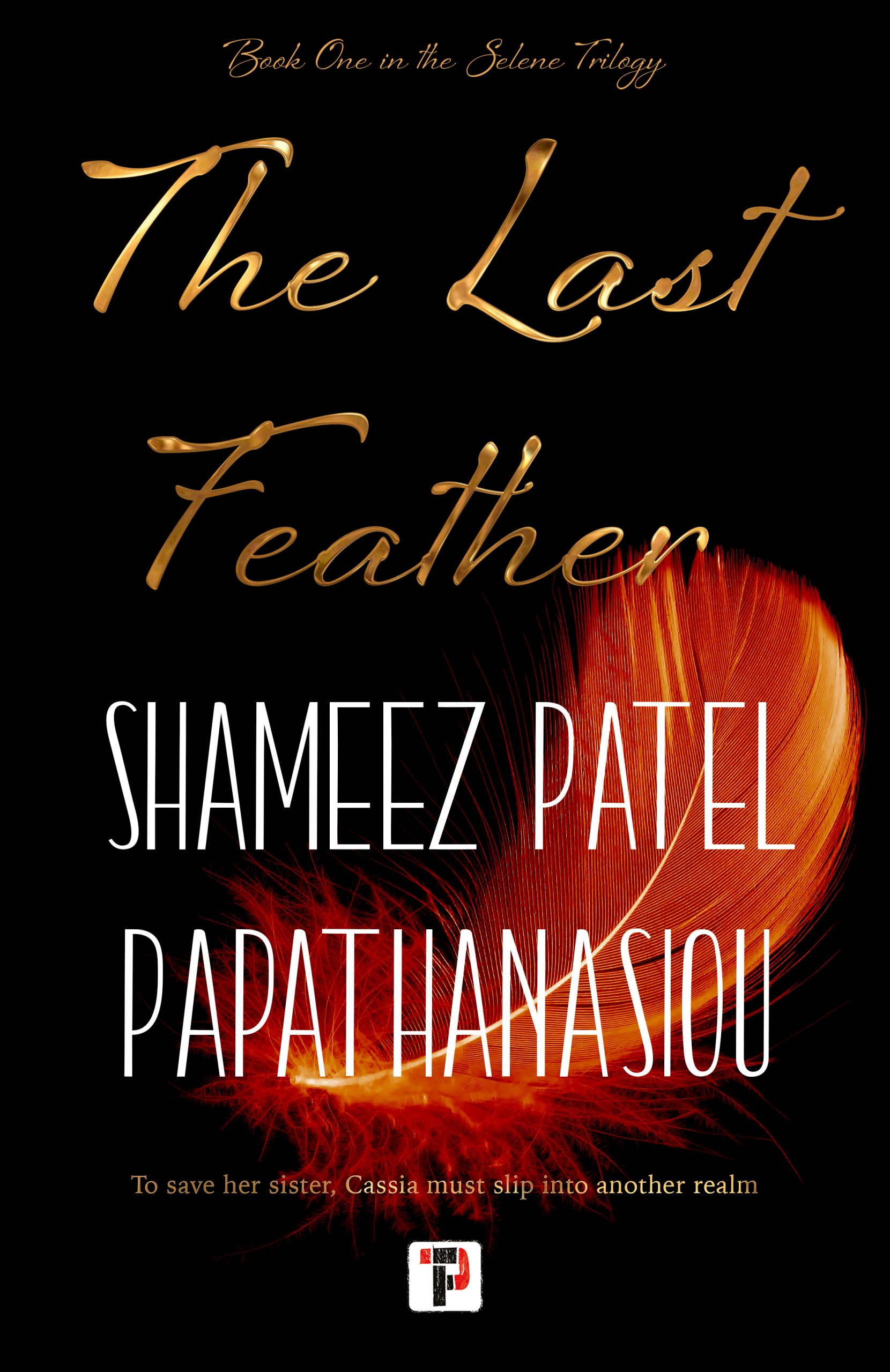 Cassia opened her mouth to greet him, to say something, but it didn’t matter. These dreams had become so commonplace that she knew there was no point in talking to him because she couldn’t hear him anyway.

Instead, she relaxed her mind, stopped trying and enjoyed what was essentially a silent one-man movie starring her best friend, Lucas Williams.

Lucas leaned forward toward her, drawing his dark eyebrows close before dipping his head. A bright white light behind him peeked through over the top of his messy black hair and then he lifted his head and all she could see was him.

He opened his mouth and she could hear him sighing. Well, she couldn’t actually hear him, but she knew what it would have sounded like. Everyone knew what Lucas’s loud and dramatic sighing sounded like. Taking in every detail, she memorized the way his dimples came out when he pursed his lips and shook his head at her as he usually did. She memorized everything in the few seconds she had with him before waking up.

Cassia awoke with a fright, thrashing about on the couch, causing the blanket to twist between her legs. A blanket she didn’t remember putting there. She didn’t remember falling asleep either. The cold air on her exposed skin sent a shiver through her warm sleepy body and she stretched her legs outward, purposely allowing the chill to work its way into her spine and eventually reach her brain, giving her the motivation she needed to move.

The television across from her was on with the sound muted, thankfully, giving her a moment to collect her thoughts as she pushed herself up and slouched over, with her elbows resting on her knees. Slowly straightening her back, she enjoyed the feeling of it cracking softly. She rolled her neck, listening to the light pitter-patter walking toward her.

“Hey,” she said, without turning around.

“Are you awake?” the small voice asked.

Cassia rolled her eyes at her younger sister, Calla, as she walked around the couch. “Well, I’m not sleep talking,” Cassia said, rubbing her hands across her face, wiping off the sleep.

“You were literally just talking in your sleep, and fighting by the looks of it,” Calla countered, sitting down next to her, bundled in their late father’s oversized nightgown. She put her tiny hand on Cassia’s knee and asked, “Was it Lucas again?”

Cassia nodded. The dreams started a few days ago and since then, every time she closed her eyes, she saw his. Those dark eyes she was all too familiar with. The eyes that she had looked to for help, regardless of the situation, boy trouble, cheating on tests, a sparring partner, whatever she had needed, he had been there. Until one morning, he wasn’t.

The loud ping of the microwave interrupted her thoughts and Calla jumped up and skipped to the kitchen. She returned with a plate of fried eggs and mushrooms. “Mom made us breakfast before she left for the hospital. She took your lunch with her.”

“Where’s your breakfast?” Cassia asked, digging into the eggs. The chili flakes stung the insides of her mouth pleasantly. She only had a few minutes before she had to be back at the hospital.

Calla shrugged and Cassia knew that it meant one thing. She was nauseous. She was always nauseous.

“I remember him, you know,” Calla said, looking up carefully. Her hazel eyes seemed glazed over and Cassia couldn’t tell if they usually looked that way. She made a mental note to bring it up with one of the other doctors, or she would research it herself.

“I know I was only seven, but he was always really nice to me. He was like my brother.”

Cassia smiled. Her heart squeezed the way it usually did when she discussed her best friend. “You were his little sister. He was there the day you were born. He stuck a piece of gum between your neck folds and when Mom found it, she was so mad, she banned him from visiting us for an entire week. It felt like a lifetime.”

Calla laughed. It was Cassia’s favorite sound in the whole world. Her high-pitched giggle bubbled up in her throat and then exploded out of her mouth and bounced off every surface, spreading light.

“Do you think they’ll ever find him?” Calla asked softly, leaning back on the couch and stretching her legs toward the coffee table. Her feet couldn’t reach the edge. She slouched down and eventually managed to get the tips of her toes onto one of the corners of the table.

Cassia shrugged. She didn’t like thinking about it. But when she did, she only had one question: How does someone just disappear?

She was there with him. Well, she was with someone else, but she didn’t want to think about that. The point was, he was there, and a few hours later, he was gone.

Shameez Patel Papathanasiou was born and raised in Cape Town, South Africa. She is a civil engineer by day, fantasy author by night and a choc-chip cookie fiend somewhere in between. Her literary adventures take her to new worlds filled with magic, monsters and someone to fall in love with.

Previous Post: « Q&A With Antwan Eady, Nigel and the Moon
Next Post: Abdi Nazemian’s Chandler Legacies Is a Guiding Legacy for Kids »
Applications are open for Literary Agents of Chang