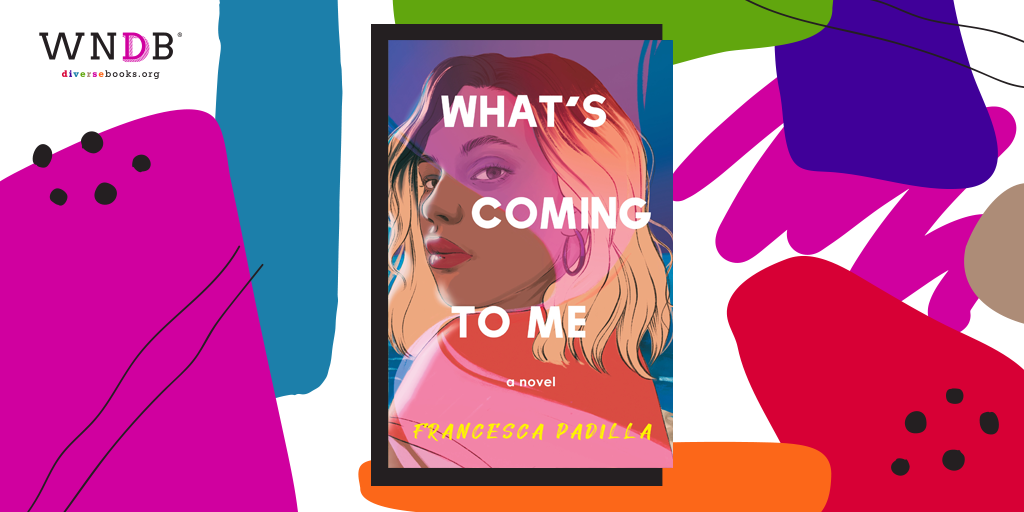 Today we’re excited to reveal the cover and an exclusive excerpt from What’s Coming to Me by Francesca Padilla, who was a 2016 WNDB Walter Grant recipient! The cover was illustrated by Beatriz Naranjalidad, and the book will be released on August 2, 2022 by Soho Teen. Preorder it here, here, here, or here, and get a look at the first chapter below:

Seventeen-year-old Minerva Gutiérrez plans revenge on her predatory boss in an attempt to escape her oppressive town in this equally poignant and thrilling contemporary YA about grief, anger, and fighting for what you deserve, perfect for fans of Tiffany D. Jackson and Erika L. Sánchez.

In the seaside town of Nautilus, Minerva Gutiérrez absolutely hates her job at the local ice cream stand, where her sexist boss makes each day worse than the last. But she needs the money: kicked out of school and stranded by her mom’s most recent hospitalization, she dreams of escaping her dead-end hometown. When an armed robbery at the ice cream stand stirs up rumors about money hidden on the property, Min teams up with her neighbor CeCe, also desperate for cash, to find it. The bonus? Getting revenge on her boss in the process.

If Minerva can do things right for once—without dirty cops, suspicious co-workers, and an ill-timed work crush getting in her way—she might have a way out…as long the painful truths she’s been running from don’t catch up to her first. 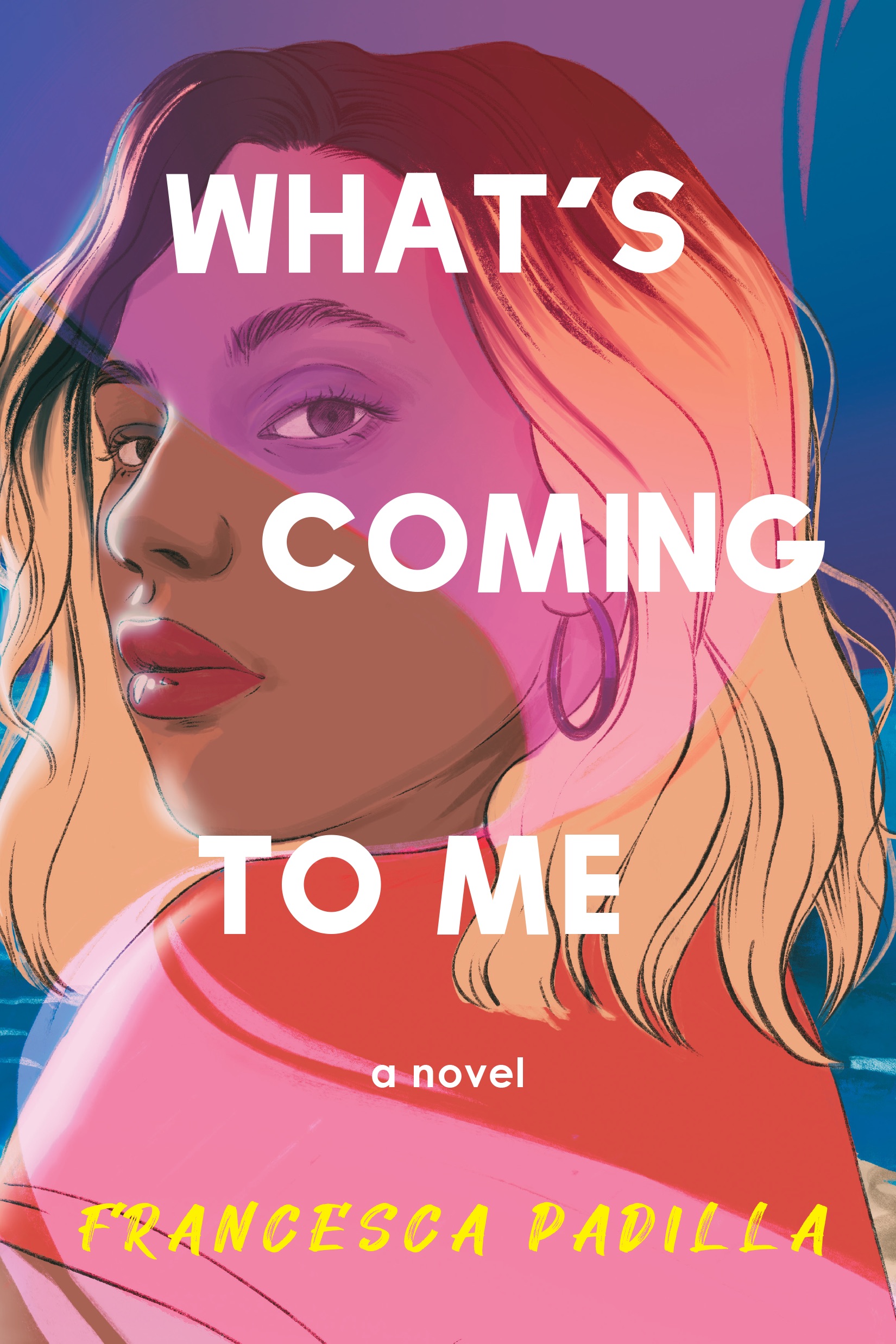 Anthony’s going to kill us.

For the third time this week, the register is short and somebody has to tell him about it. It’s decided that person is me, the newest employee at Duke’s Ice Creamery.

Everyone else is too busy. One of the other girls, either Jordan or Jamira, sits cross-legged on the sherbet freezer counting tips. The other finishes up an order for a woman at the window with a fistful of old coupons. Then there’s Eli, who’s the Assistant Manager and happens to be the only guy, walking back inside from emptying the mop bucket. Which everybody acts like he’s a big hero for doing but in my opinion is still preferable to most tasks, because it takes place away from the counter and the infinite demand of customers. A monster that refuses to stop feeding.

Somebody turns off the lights inside to hint that we’re closing. My eyes throb, trying to adjust after a double-shift’s worth of white fluorescent tubes. I grab the register money in its fat envelope and make my way towards Anthony’s office, tucked in the very back of the ice cream stand.

On the way, I open the back door and step out, immediately hit with the scent of Nautilus in summer—a mix of grass and dust and air conditioner exhaust.

I came out here to procrastinate but also look for my ride home, which isn’t here yet. I scan the cars in the weedy lot behind Duke’s, even check the picnic tables on one side of the stand, where the coupon woman has split the two-for-one sundaes among a gaggle of children. It’s almost midnight.

My neighbor CeCe should’ve been here at least fifteen minutes ago. We haven’t been friends that long—in fact, I’m not sure we’re friends now—but she sells weed, meaning she always has some on her, and being in her apartment is better than home.

Assuming my shift ever ends, how the hell am I supposed to get out of here? I might have to grab one of the last buses, or much worse: walk.

I remember the envelope in my hands, paper thin and smooth from being used so often. The feel and weight of the cash inside is so specific. It’s the most money I’ve ever seen in my life.

Same as the last time I had to do this, I picture running off with the envelope, leaving Nautilus altogether, and starting over somewhere beautiful and busy. The daydream always evaporates the second I hand it over. Stays just that, a daydream.

Our boss Anthony calls me Space Cadet. But only when he’s in a good mood. When he’s in a bad mood, which is most of the time, he calls me “this one” like I haven’t been working at the Ice Creamery for an entire six months. I’m pretty sure he’s forgotten my name.

The thing is, I think everyone believes that I’m a Space Cadet. Sometimes I want to tell them all I read books (trashy ones most recently, but still). That one time I stayed up until three a.m. Googling osmosis. That I’m an advanced student.

Was corrects a nasty little voice in the back of my head. Was an advanced student.

There are only two good things about working at Duke’s Ice Creamery. The first is getting paid in cash (as much as possible of which I add to an old coffee can I call the PROBABLE ORPHAN FUND).

The second is that nobody at Duke’s knows or cares about who I used to be, the Minerva from Before and her fuck-ups. Eli’s the only one who goes to the same school, but we don’t know each other, and he just graduated. So, here I’m Space Cadet.

A van comes hurtling around the corner, appearing to pull up to the sidewalk in front of the ice cream stand. I bet we’ll have to take their order, too, even though we turned the lights off.

The silver lining is that it’d buy a few more minutes for CeCe to show up—or for me to worry about getting home.

“Come on,” I hear Jamira shouting to everyone as I step back inside. It turns out she was the one sitting on the freezer. “Just tell them we’re closed.”

I’d handle it myself—last-minute orders mean higher tips—but I’ve already held onto the envelope too long. I shut the door behind me, finally ready to go to Anthony’s office and tell him the register was off, when somebody screams. I bolt toward the sound.

This turns out to be a mistake.

Two people—two figures—have managed to hop the counter and get inside. Both are wearing black and white cat masks. Both hold long, thin knives.

“Stop what you’re doing,” says one of the masks. He has a faint lisp, although it might be the cheap plastic.

I tighten my grip on the envelope. Fear pulses through my fingers. It’s like I’m holding a bag of airborne poison, and if I move an inch it might escape and kill us all, starting with me.

They stand before the ice cream cake freezer, the display now the main light source. The rest of us have slowly gravitated together to cower by the toppings station.

“Come on guys,” Eli starts, but one of the robbers takes a step forward, pointing the knife’s tip at each of us, lingering on Eli the longest.

“I will slice all your pretty faces in two seconds or less. Do you want to see?”

We sink to the tiles.

“Stay the fuck down,” the other one says, also with a kind of lisp. Has to be the mask. “And do not move.”

My eyes, now fully used to the dark, return to the floor and the graveyard of items left behind by Eli’s mop: a toothpick, a shrunken hair-tie, flattened sprinkles, like confetti from a long-dead party.

“Hey,” blurts one of the robbers, “she’s got something there.”

The other mask tilts in my direction. “Give it here.”

Time actually stops while I hand over the envelope. Outside, moths bounce against the awning. In the light of the cake freezer, I sneak a look at my co-workers. Eli’s face is pale and stony, a single drenched curl over his forehead. Jordan and Jamira clutch each other and sob—they’ve styled themselves similarly tonight, in perfectly winged eyeliner and high ponytails spilling out above their Duke’s visors. Jamira is Honduran-Columbian and Jordan is some kind of white, but they look related. Even their tears are stunning.

“Okay now,” one of the robbers calls out, like we’re all just little kids misbehaving, “there won’t be any problems at all if you just listen.”

They tell one of us to open the cash register and the rest keep our heads down. Nobody explains that the cash register is empty and that they already have its contents in the envelope. I shift my focus to my feet. My white sneakers and socks that sometimes make me feel more innocent than I am. I suck in my breath and try to erase myself from the moment—pretty easy after all the practice I’ve had this past year.

The cash register opens. The till lifts.

I brave another look. The envelope I was just holding changes hands, knives still out. One of the robbers counts the envelope money while the other taps his non-knife hand against his thigh. I make out white fingers and wrists. Their clothing is dark and heavy despite the heat.

Eli’s the one who answers. “He should be back here.”

“Should be? That’s not what I fucking asked.”

“I mean, I thought he was.” Eli falters and turns to me. “Min? Weren’t you just back there?”

Foolish kid, thinking I’ve been gone this whole time doing my job. This might also be the most Eli’s ever spoken to me. While he’s never been mean, he’s never been anything else to me, either.

Nobody needs to be told twice. We spill out the back door and scatter into the night, which has broken into a sloppy drizzle. I cut through the lot to the sidewalk on the other side. My heart beats so hard I can feel it in my legs as I run for my life.

A car engine starts. Then another.

Somewhere close to my ear and across the ocean at the same time, there’s muffled crying.

What about the coupon woman and all those kids?

And what happened to my ride?

I can’t think about any of that. All I can do is run, a task I actually understand. Run and keep running until the blood—my heart—is the only sound left in the world.

Francesca Padilla is a Dominican-American fiction writer born and raised in New York City. She is the recipient of a Walter Dean Myers Grant from We Need Diverse Books and holds a BA in Creative Writing from the State University of New York at Purchase College. She lives with her family in Rochester, NY.

Previous Post: « Q&A With Femi Fadugba, The Upper World
Next Post: Q&A with David Valdes, Spin Me Right Round »