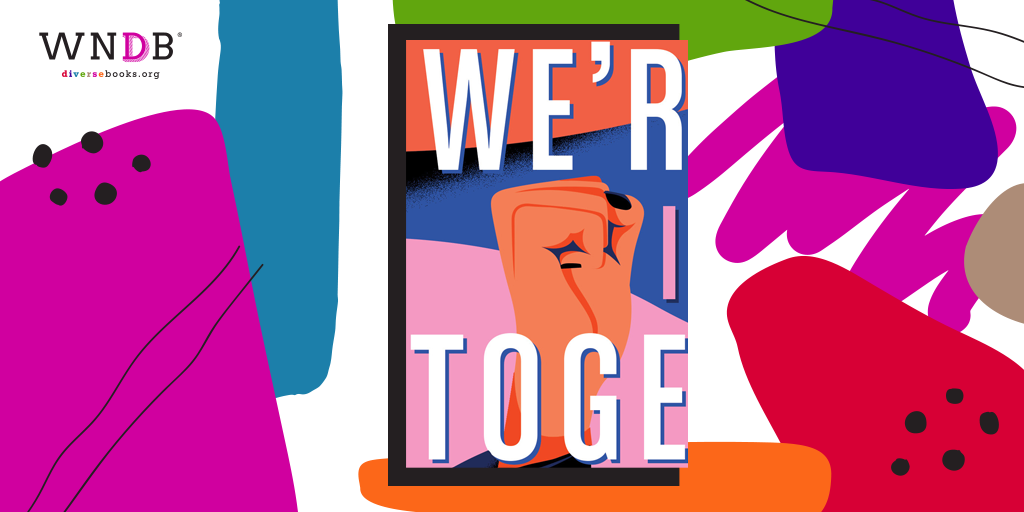 Today we’re delighted to reveal the cover for We’re in This Together by Linda Sarsour! The cover was illustrated by Petra Ericksson. The book will be released on November 29, 2022 by Salaam Reads. Preorder it here and read an exclusive excerpt below.

An inspiring and empowering young readers edition of We Are Not Here to be Bystanders, the memoir by Women’s March co-organizer and activist Linda Sarsour.

You can count on me, your Palestinian Muslim sister, to keep her voice loud, keep her feet on the streets, and keep my head held high because I am not afraid.

On January 17, 2017, Linda Sarsour stood in the National Mall to deliver a speech that would go down in history. A crowd of over 470,000 people gathered in Washington, DC, to advocate for legislation, policy, and the protection of women’s rights—with Linda, a Muslim American activist from Brooklyn, leading the charge, unapologetic and unafraid.

In this middle grade edition of We Are Not Here to be Bystanders, Linda shares the memories that shaped her into the activist she is today, and how these pivotal moments in her life led her to being an organizer in one of the largest single-day protests in US history. From the Brooklyn bodega her father owned to the streets of Washington, DC, Linda’s story as a daughter of Palestinian immigrants is a moving portrayal of what it means to find your voice in your youth and use it for the good of others as an adult. 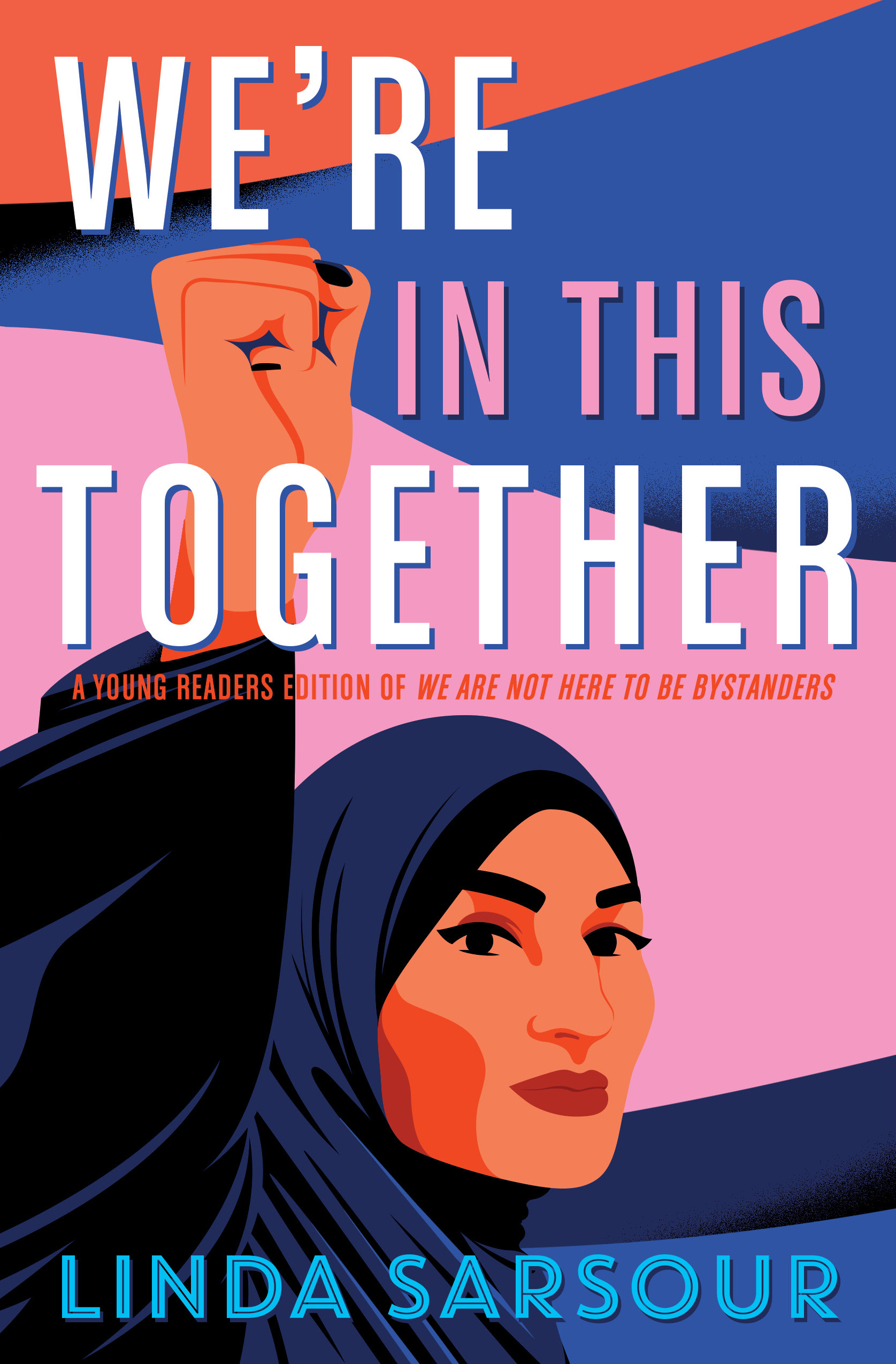 Way back when I was four years old, my father bought and opened a bodega in Crown Heights, a  predominately Black and Latinx section of Brooklyn. He named it Linda Sarsour’s Spanish &  American Food Center. Back then it was very unusual for an Arab man to name a business after  a daughter; Arab men usually named things after their firstborn sons. But Yaba had been  extremely euphoric about my birth. When his friends would question him about the name of the  store, he’d say, “Why should I wait? Linda is everything to me. Why shouldn’t I celebrate her as  I would a boy?”

So, Linda Sarsour’s operated from Monday through Sunday, from dawn until long after dusk.  For much of my childhood I only saw my dad on Sundays, his one day off. He would be gone  before I woke up during the week and wouldn’t come home until after I was asleep. Sometimes  as I snuggled under the covers, I would promise myself that I would wake up the next morning in  time to see him.

With my father at the store for such long hours and with so many children to raise, most of  my mother’s work centered on our home. She was a mother and a housewife, and supported the  family business. When we were young, a lot of her responsibilities related to babies and young  children—changing diapers, bottles, feedings. Practicing Palestinian artistry in the kitchen for  nine hungry mouths meant that her grocery runs would take two or three hours. Laundry and  cleaning would take much longer. And when you own a bodega, you handle a lot of cash. My  mom made sure it made it to the bank.

As the oldest, I would help dress, feed, and babysit my siblings. I’d also assist around the  house. I would cut notepaper into little pieces, write the name of one room—living room, dining  room, kitchen, bathroom—on each, fold them into tiny balls, and then have my sisters pick the papers out of a bowl. Whatever room you pulled was what you were cleaning that day. I would  walk around overseeing the process, making sure my siblings used the right products and that  everything was spotless.

“Hold up! How do you not get a room to clean?” she asked.

“Someone has to be the organizer,” I told her.

Only God knew that I had spoken my future!

My mom, she thought it was hilarious that it had taken so long for my sisters to figure out  what I’d been doing. The mischievous twinkle in her eyes told me, You are onto something! I’ve been organizing people ever since.

Sometimes the seeds of the things you’ll be good at when you’re older get planted, grow  roots, and even sprout when you’re young.

Over the years, I did a lot of fending for myself, learning to navigate back and forth between  my world at home, flavored with our Palestinian cultural traditions, and the mainstream  American society, I often served as translator, particularly for my mom. I filled out school forms,  made sure that my siblings completed their homework before going outside to play, and signed  everyone’s school permission slips. To spare her frustration and embarrassment, I helped  Yumma communicate in English with our teachers, the pediatrician, the people in the billing  office at the utility company. The fact that I played so many roles made learning particularly  important to me.

Our lives tied together

When I turned twelve, I started working at the bodega after school on Tuesdays and  Thursdays as Yaba’s cashier. Mom would pick me up from school in her red Lincoln Navigator  and drive me the twenty-five minutes to the store, located at the intersection of Troy Avenue and  Montgomery Street. So I grew up in Crown Heights as much as in Sunset Park.

Everyone came to Yaba’s bodega: African Americans, Caribbean and Central American  immigrants, Puerto Ricans, and a few Orthodox Jews. The store was a neighborhood gathering  place. Sometimes people would come to shop; other times they would just stop by to bring my  father up to speed on what was going on in their lives. When you were with my father, even if  you weren’t in the mood to laugh, you had to laugh, because his laugh made you laugh, so  people liked to stop by. Yaba would converse with customers, chat with the postman, sit outside  on stacked milk crates and shoot the breeze with the people who lived above the store, and  chitchat with neighbors as they walked by. When I was a little older, and his business was better  established, he would take the time to sip Turkish coffee with some of the many other Arab men  who owned bodegas. His personal life took place at work because sixteen-hour days didn’t leave  time for having many friends at home.

I greeted people and rang up their purchases while I did my homework. I got to know all the  neighborhood kids as they bought milk, bread, toilet paper, kosher goods. Sometimes a kid didn’t  have enough cash. My father taught me to dutifully write their parents’ names in the marbled  composition notebooks where he recorded the credit he extended to his regular customers. Their  parents would pay their debts when payday came or less meager times arrived. Sometimes our  Orthodox Jewish customers would need to buy something after sundown on the Sabbath, when  their religion didn’t allow them to handle money. Other times people’s money would just run  short and they’d need my dad to float them. Yaba never worried about when the ledgers would  be squared. He appreciated his customers. They paid what they could, a little at a time, until their  debts were gone, and Yaba trusted them with a simplicity that moved me, even as a young girl.

In the process of interacting with so many different people, I learned that even though people  may look very different, every human being has very similar wants and needs.

I remember one afternoon gazing out the bodega window, watching kids from the public  school across the way being rowdy at the bus stop. My dad stood next to me as a skinny African  American boy, who couldn’t have been more than twelve, entered the store and walked past us,  his hair cropped so close to his head that it was hardly more than a shadow. The boy walked to  the coolers in the back where the sodas and twenty-five-cent juices were. Then he selected a  juice as well as a twenty-five-cent Hostess lemon cake from a display rack. The kid looked  around, trying to make sure the store shelves blocked him from our view, and then he tucked the  juice box and cake into the pockets of his jacket. He didn’t realize that Yaba could see him in a  large circular mirror that offered a fun-house view of the four long aisles of the store. The boy then walked to the front of the store, pushed the glass door open, and left.

Yaba followed him outside. “Jerome,” he said, “please give me what’s in your pockets.” The boy spun around, looking stricken. I don’t think he’d realized that Yaba knew his name.  “I—I—I don’t have anything in my p-p-pockets,” he stammered.

“Don’t lie to me, son,” Yaba responded calmly. “I saw you put that quarter juice and quarter  cake in your pocket. Now give them to me.”

Jerome placed the items he’d stolen into my father’s hand.

“Why did you steal these things?” Yaba asked, sounding disappointed, almost hurt. “I know  your mother. She didn’t raise you to do something reckless like this. What do you think she  would say if I told her what you did?”

“She’s at work,” Jerome mumbled, his voice so soft that I barely caught the words. “I didn’t  have any money.”

Then he came inside, placed the quarter juice and little cake into a brown paper bag, and  folded the top down. He went back outside and handed the bag to Jerome, stooping down so that  he was at eye level.

“The next time you are hungry and don’t have any money, you don’t steal what you want,”  Yaba told him. “You come in here and you ask me, and I will give it to you. Do you  understand?”

Jerome nodded vigorously, his eyes filling with tears. Yaba patted him on the shoulder and  stood watching as he turned and ran off down the block, clutching the bag. Then my father  walked back into his store and said nothing more.

Years later it would occur to me that Yaba could have called the police on Jerome, but that  would have resulted in Jerome’s having a police record. Yaba truly cared about his customers, and they cared about him. My many hours in the store taught me that my life, well-being, and  experiences were deeply tied to my community.

Linda Sarsour is a Brooklyn-born Palestinian Muslim American community organizer and mother of three. Recognized for her award-winning intersectional work, she served as national cochair of the Women’s March, helping to organize the largest single-day protest in U.S. history. She is the former executive director of the Arab American Association of New York and cofounder of the first Muslim online organizing platform, MPower Change, as well as Until Freedom, a national racial justice organization working with Black and Brown communities across the country.