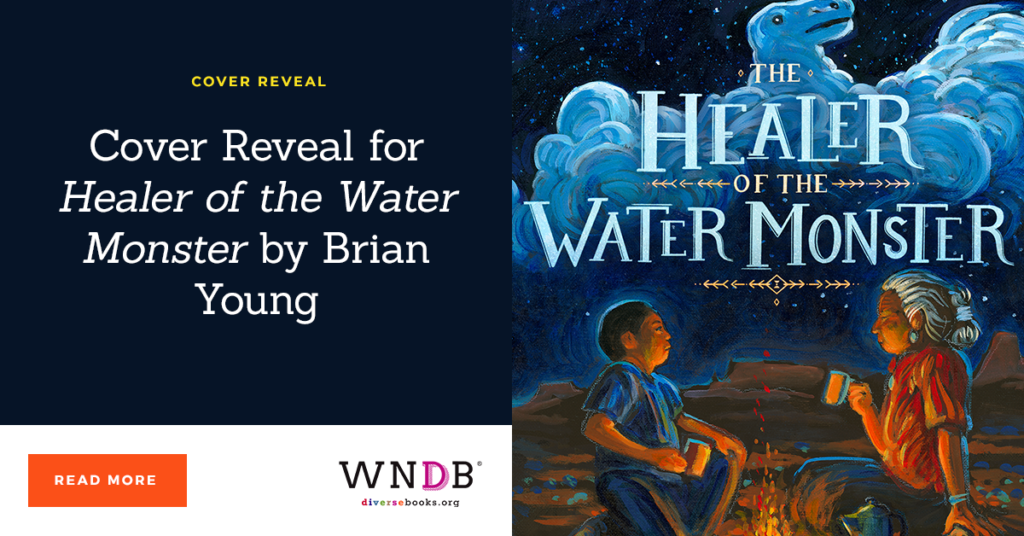 Today we are thrilled to reveal the cover for Healer of the Water Monster by Brian Young. Cover art by Shonto Begay. The book will be released on May 11, 2021, by Heartdrum. Preorder here! 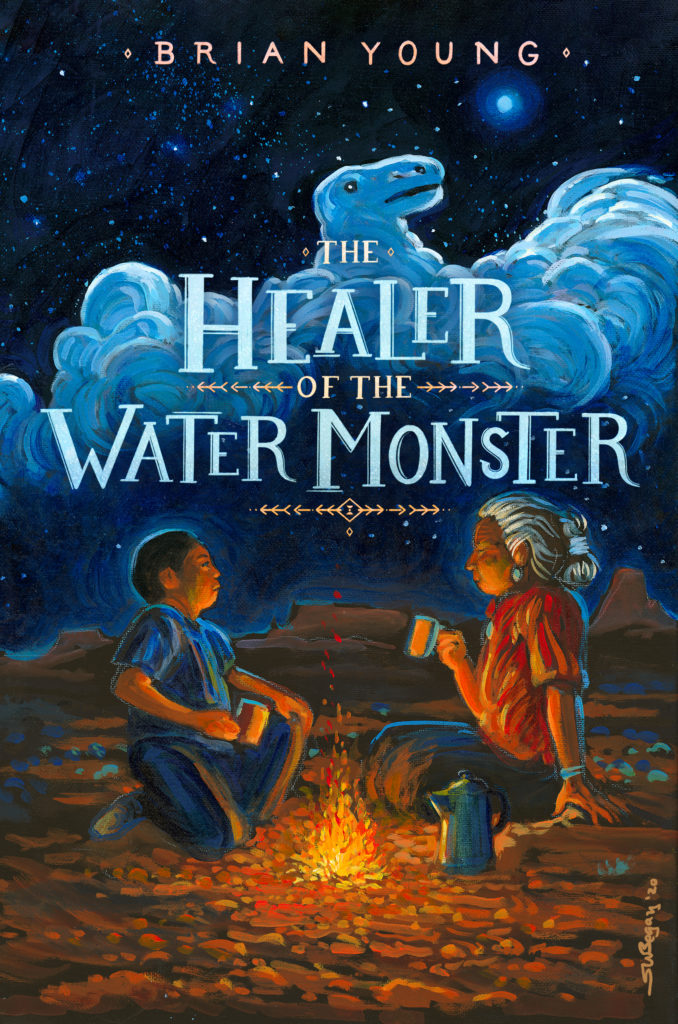 Healer of the Water Monster is a middle-grade chapter book about a young Navajo boy who spends his summer at his mobile home site of his paternal grandmother, who he calls Nali, on the Navajo reservation in northwestern New Mexico to complete a science project. Living in Phoenix, Arizona, he is used to modern amenities such as running water and electricity. Nali’s mobile home doesn’t have those things.

One night he gets lost in the nearby desert and comes across a sick water monster from the Navajo Creation Story. This water monster has been sick for thirty years and his ailment has caused a drought for the nearby area. In exchange for getting him out of the desert safely, Nathan embarks on a journey to discover what is sickening the water monster and hopefully find a cure before it is too late.

Why did you want to reveal the cover of this book on October 1? How do you usually celebrate the Navajo New Year?

I wanted to revel the book cover on October 1 because that is considered the Navajo New Year. Traditionally, my people harvest crops in the cornfield around this time that is our marker for a new year. Healer of the Water Monster is deeply steeped in Navajo mythologies and philosophies and I wanted the book reveal to reflect those teachings.

It’s still early in the promotional process for Healer of the Water Monster, so what can you tell us about your characters that will make us fall in love with them and want to read more?

The main character is called Nathan. He’s 11 years old, full-blooded Navajo, and lives in Phoenix, Arizona. Once in awhile, he’ll get sent to his paternal grandmother’s for the summers. He’s a little shy but has a huge heart and tons of empathy for everyone and everything around him.

The second biggest character is Nali. Nali is what Nathan calls her and that refers to the Navajo word for parental grandparent-grandchild relation. In Navajo, Nathan would call her shinali adzaa and Nali would call him shinali ashkii. She’s very patient with Nathan, unlike his divorced parents.

Another human character is Uncle Jet and he’s pretty important. He is a former Marine who is battling his alcoholism. He cares about his family, Nathan especially, but does make mistakes.

When it comes to the representation of the Emergence Story (my people’s creation story), there is a water monster called Pond. In our Emergence Story, we Navajos believe that we emerged from a place called Dinetah into our current world, which we refer to as the Fourth World. Though I have heard other people say that we are in the fifth world. But I grew up hearing we are in the Fourth World, so I go with that. Water monsters rule in the Third World, a water world.

And in my book (this is not part of the Emergence Story), I say that water monsters followed First Man and First Woman into the Fourth World and brought with them waters from the Third World that would become the rivers, ponds, lakes, and other bodies of water in this world. Woo! That was a mouthful. Alright, so Pond has been sick for roughly thirty years. And because Pond has been sick, he hasn’t been able to bring down the rains and thereby causing a drought in the area for thirty years. And it’s Nathan’s ultimate goal to find out what is sickening Pond and hopefully heal him.

What were some of your favorite moments to write in this book?

Without giving away too much, I would say the third act of the book because it almost exclusively engages with the mythology. At the time I was writing it, I had an idea of how the story was ultimately going to end but didn’t have the slightest clue as to how to get there. So in the initial draft, I was discovering what was happening as I was writing. I hope that readers will get that same joy and excitement as I did when writing it.

Aside from the mythological engagement, my favorite moments are the intimate ones between Nathan and Nali, as well as Nathan and Uncle Jet. Nathan feels overlooked by his divorced parents so Nali and Uncle Jet provide both the attention and interaction that he craves. But there is a special place in my heart for the moments between Nathan and Nali. I’m a grandma’s boy and their interactions reflect my relationship with my grandma.

Oh, man. Hands down Louise Erdrich. Christine Day. Cynthia Leitich Smith. Eric Gainsworth. Tim Tingle. There are many more. The panel would probably be a discussion on the respectful representation of Indigenous youth. Man, I hope one day I am as notable as they are!

Do you have any advice for authors, especially emerging or debut authors?

Yes! Make sure what you are writing is something that you love and can return to it multiple times because you’re going to be spending a lot of time with your story.

If you love your story, the revision process isn’t going to be as difficult. I’ve spent five almost six years writing, rewriting, revising, and editing this story alone. If I didn’t love this story and these characters as much as I do, I imagine that I wouldn’t have stuck with them for that long a time or invested this much of my effort into their story.

What other books do you see Healer of the Water Monster as being in conversation with? And do you have any recommendations for published or forthcoming books, especially kidlit?

Cece Rios and the Desert of Souls by Kaela Rivera, which is going be released on April 13, 2021. Rivera incorporates a lot of her culture and mythology into its storyline as well.

For other books that Healer is in conversation with, I hate to say it but my book does have a lot in common in with books in the urban fantasy genre. I hate saying that because my culture isn’t fantasy. It’s spiritual and religious. My culture is a living, breathing entity that influences my everyday actions.

Indigenous people in the United States, my people included, were not legally allowed to practices their belief systems until the American Indian Religious Freedom Act of 1978 came to be. My culture is still recovering from colonization. I hope that while readers may recognize the structures of the hero’s journey with urban fantasy elements, they also recognize that my culture isn’t something to be taken lightly. I have taken much consideration in how I want to share it.

Honestly, I can’t think of anything. I’m just happy to be in the position of being asked questions! 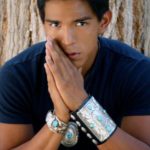 Author and filmmaker Brian Young is a graduate of both Yale University with a Bachelor’s in Film Studies and Columbia University with a Master’s in Creative Writing Fiction. An enrolled member of the Navajo Nation, he grew up on the Navajo Reservation but now currently lives in Brooklyn, New York.  As an undergraduate, Brian won a fellowship with the prestigious Sundance Ford Foundation with one of his feature-length scripts. He has worked on several short films including Tsídii Nááts’íílid – Rainbow Bird and A Conversation on Race with Native Americans for the short documentary series produced by the New York Times. Brian is currently working on his two books with Heartdrum, an imprint of HarperCollins. In addition to film and writing, Brian also works as a personal trainer, both online and in person.

Previous Post: « 5 Bookish Podcasts That Amplify Diverse Voices
Next Post: Cover Reveal and Excerpt of Love & Other Natural Disasters by Misa Sugiura »
Congratulations to the 2023 #ALAYMA winners and ho