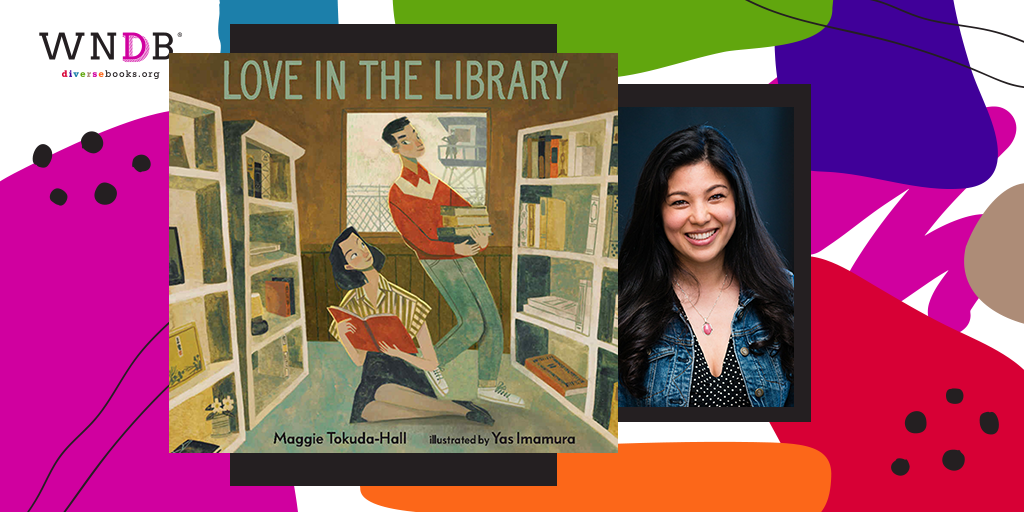 Today we are thrilled to reveal the cover for Love in the Library by Maggie Tokuda-Hall, illustrated by Yas Imamura. The cover was designed by Heather McGee and illustrated by Yas Imamura. The book will be released on January 11, 2022, by Candlewick Press. Read Maggie Tokuda-Hall’s interview with WNDB about her novel The Mermaid, The Witch, and The Sea.

Set in an internment camp where the United States cruelly detained Japanese Americans during WWII and based on true events, this moving love story finds hope in heartbreak.

To fall in love is already a gift. But to fall in love in a place like Minidoka, a place built to make people feel like they weren’t human—that was miraculous.

After the bombing of Pearl Harbor, Tama is sent to live in a War Relocation Center in the desert. All Japanese Americans from the West Coast—elderly people, children, babies—now live in prison camps like Minodoka. To be who she is has become a crime, it seems, and Tama doesn’t know when or if she will ever leave. Trying not to think of the life she once had, she works in the camp’s tiny library, taking solace in pages bursting with color and light, love and fairness. And she isn’t the only one. George waits each morning by the door, his arms piled with books checked out the day before. As their friendship grows, Tama wonders: Can anyone possibly read so much? Is she the reason George comes to the library every day? Beautifully illustrated and complete with an afterword, back matter, and a photo of the real Tama and George—the author’s grandparents—Maggie Tokuda-Hall’s elegant love story for readers of all ages sheds light on a shameful chapter of American history. 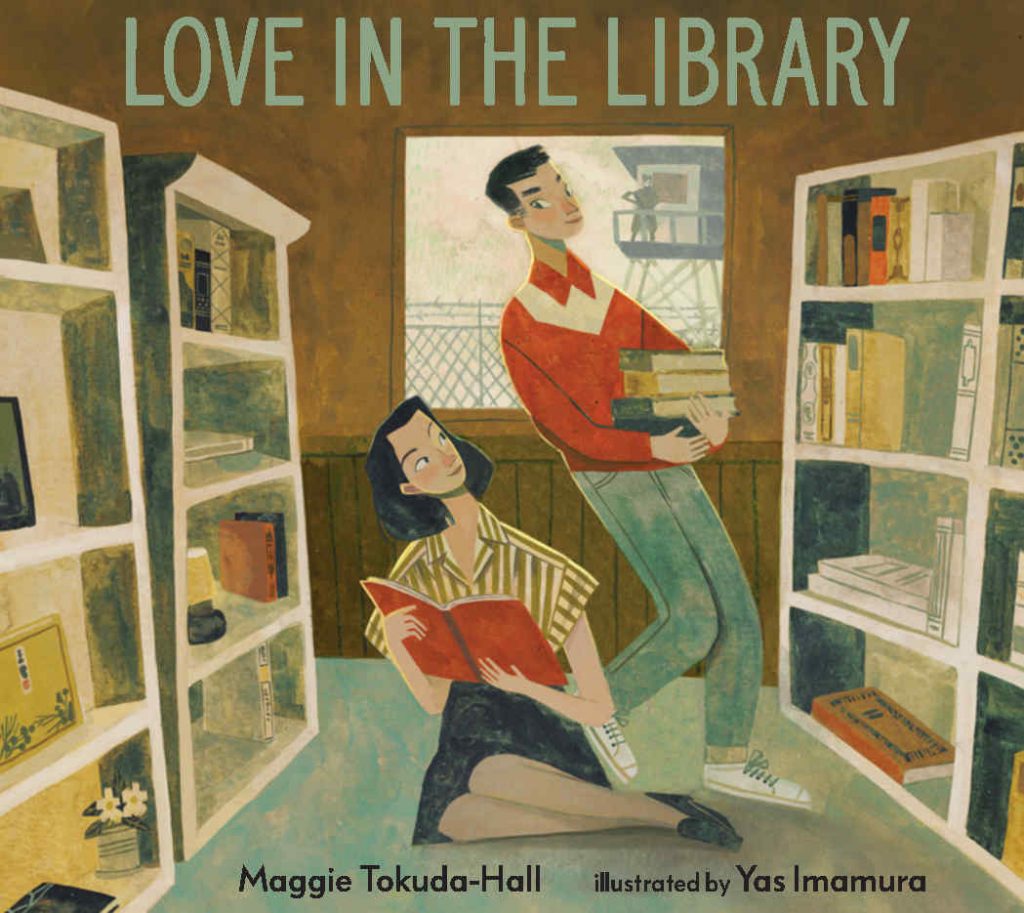 A note from Maggie Tokuda-Hall

This story means a lot to me.

It’s about my grandparents, and so naturally it does. It makes me feel closer to them, to my mother’s history, the history I’ll teach my own son about. But most importantly, it helps me understand our nation.

There was a story Tama told me a few times while she was alive, about a jar of orange marmalade a friend brought to her in Minidoka. It was so exciting, she and all her friends passed it around and ate it in small spoonfuls, relishing the sweetness they were denied every day.

And there is of course the story of her and George falling in love.

These stories are essential to me because they tell me a two things about the United States of America. For one thing, they tell me that we are country defined by racism. There is no demographic, no ancestry our nation can claim that is not in some way shaped by racism—to deny this unifying characteristic of our history is a lie at best, and a bludgeon used to force people back into pain and silence and disenfranchisement and even death at worst.

The US history of racism is not one that ends with the Civil Rights Movement, nor with the reparations paid to my own family for internment, nor with Kamala Harris. It continues now on our borders, with children locked in cages and torn from their families for the crime of wanting to be American. It continues on our streets when Black folk are murdered by the police. It continues in Muslim bans, in reservations, in mass incarceration, in medical apartheid, food deserts, and voter suppression.

And yet despite this, we find joy.

This is not to excuse the racism, nor to say it was ever “worth it,” or to minimize the loss and suffering and violence it has wrought. It is simply to reflect on the great strength of Americans, our impossible capacity for joy. I think of my grandmother licking marmalade from a spoon, and of her sharing that taste of freedom with her friends.

This reminds me that for every ounce of hate, there is one of love to match it. And while it is always easier to destroy than it is to build, stories like that of my grandparents remind me to hope.

“The miracle is in all of us,” Tama said. And she was right.

Because, if they could fall in love while locked away in a prison camp, their educations arrested, their dreams for their futures dashed, their homes lost, their dignity stolen, and their lives all but stopped—what else can we do? 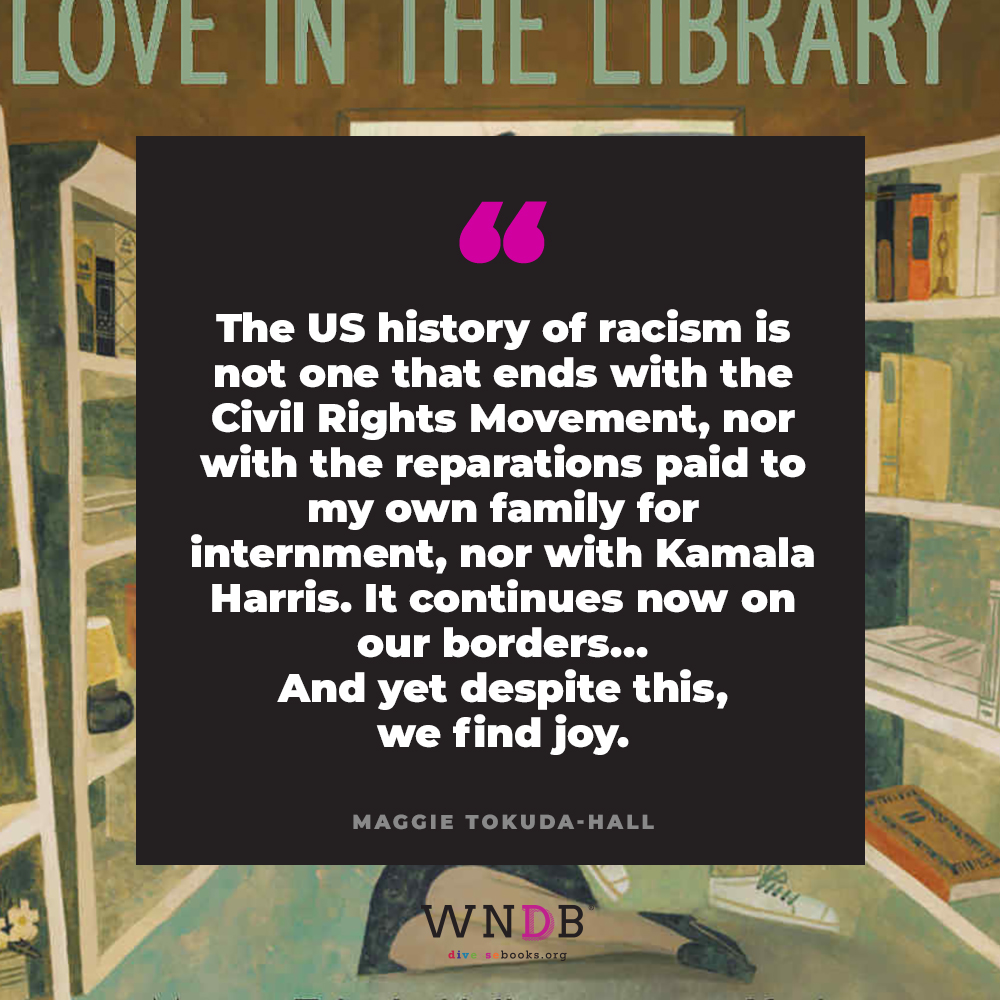 Maggie Tokuda-Hall is the author of Also an Octopus, illustrated by Benji Davies, and the novel The Mermaid, the Witch, and the Sea. She lives in Oakland, California. 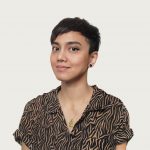 Yas Imamura is the illustrator of The Very Oldest Pear Tree by Nancy I. Sanders, Winged Wonders by Meeg Pincus, and other books for children. She lives in Portland, Oregon.

Previous Post: « Cover Reveal for Usha and the Big Digger by Amitha Jagannath Knight, Illustrated by Sandhya Prabhat
Next Post: The Importance of Intergenerational Storytelling and Learning Self-Love From Our Elders »
WNDB is pleased to announce our 2022 mentees! Thes