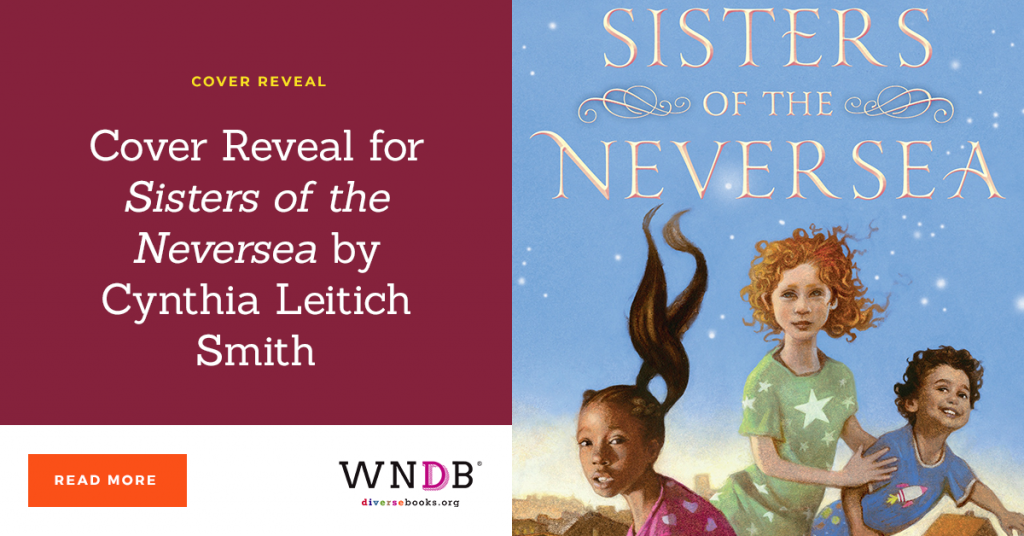 Today we are thrilled to reveal the cover for Sisters of the Neversea by Cynthia Leitich Smith. The book will be released on June 1, 2021, by Heartdrum. The cover illustration is by Floyd Cooper and the book design is by Catherine San Juan. Preorder here and here!

From the author, Cynthia Leitich Smith: I’m fascinated by the conversation of books over time, especially new stories that talk back to those that are widely considered classics.

Sisters of the Neversea is one of those books, offering a modern take on J.M. Barrie’s Peter Pan, one that’s centered on its girl characters and told from a decidedly Indigenous point of view. It unpacks the toll of problematic books on children while reinventing Neverland to showcase an exciting, heartfelt story of family, community, hope, and Fairy dust.

Suggesting Floyd Cooper for the cover artist was a pie-in-the-sky, dream-huge kind of ask. My beloved editor cautioned me that the legendary illustrator was quite busy but agreed to try. Imagine my delight when he embraced the project and so brilliantly brought the characters to life.

Floyd’s engaging and thoughtful rendering of Lily, Wendy, Michael, and their world became a collaborative springboard and inspired me to revisit details of the text to reflect better his vision—and gratefully so.

From the illustrator, Floyd Cooper: Working on the cover of my sister and friend Cynthia Leitich Smith’s enchanting book, Sisters of the Neversea, was something special for me. Special in that I have never had a chance to tap into my Native American heritage to a great degree for a book. I am, like Cyn, a member of the Muscogee Creek Nation by way of my paternal ancestors.

Initially, I considered several different approaches in an attempt to create art that was a departure from my signature style to honor this christening of my expression of this part of me. After further thought, however, I decided to hold onto my visual voice and let the subject of the art carry the moment.

That said, I would like to show you here a bit of the development of my art for Sisters of the Neversea.

I started with a few rough sketches to capture the body language and expression of the subjects, three children floating out of their open bedroom window to be carried away by Peter Pan.

Rough sketches of the main characters were then developed into the final character studies by fleshing out their individual personalities. These were done with graphite using my favorite pencil, the amazing Palomino Blackwing Soft on Vellum tracing paper.

I then turned to exploring color schemes with quick watch studies of color using dry chalk on Bienfang Graphis, favorite multimedia paper because of its stark, bright whiteness. This sage was also helpful in establishing and solving tonal details.

Next I rendered the scene with characters and type in place within the parameters of the trim box, using my oil erasure on the illo board. Kneaded erasers and thin oil paint for this stage, monotoned in warm browns. 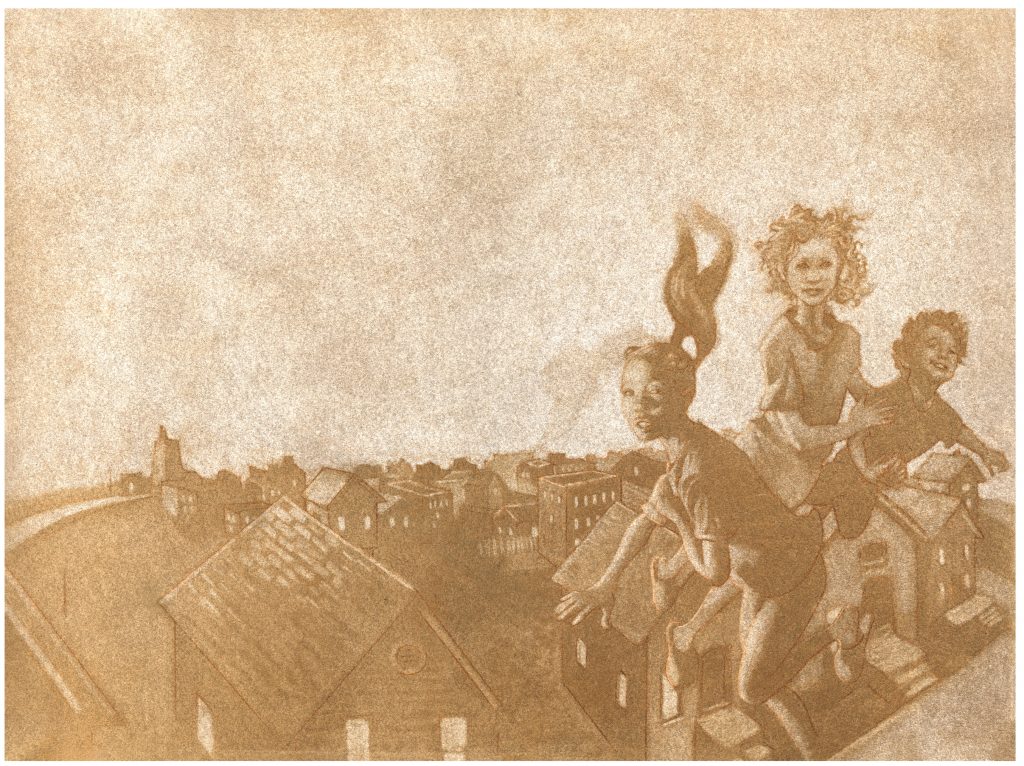 Color was then layered on in thin washes until the desired luminosity was achieved as the deadline was calling!

The image was then scanned into Photoshop for clean-up and tweaking of a few areas. The deadline was louder! 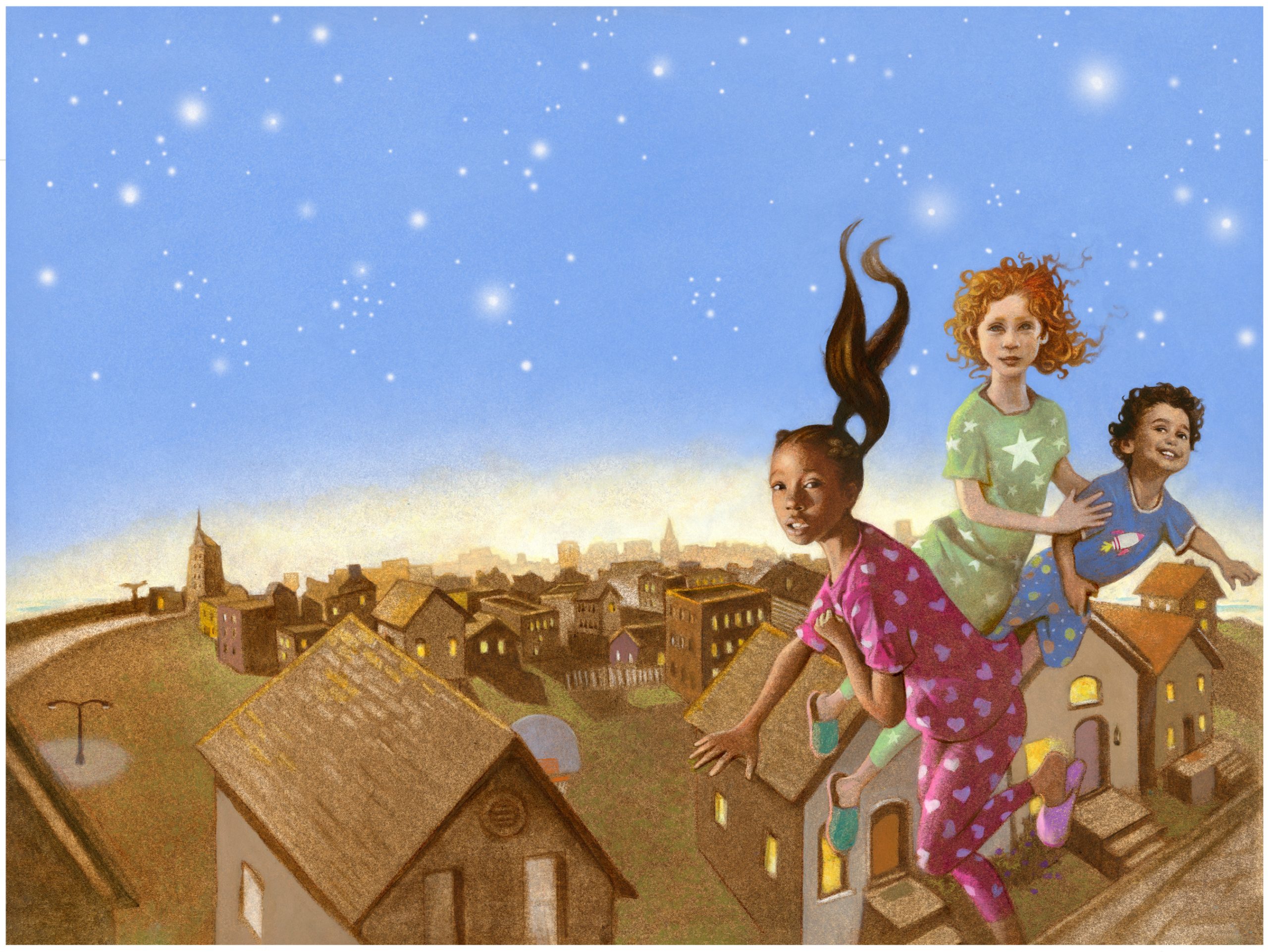 A CMYK scan was sent off to Cat San Juan and the art department at HarperCollins. Ta Daa! Done.

With this project, Cynthia has awakened a part of me that I look forward to expressing more in the very near future—my Creek Nation spirit. 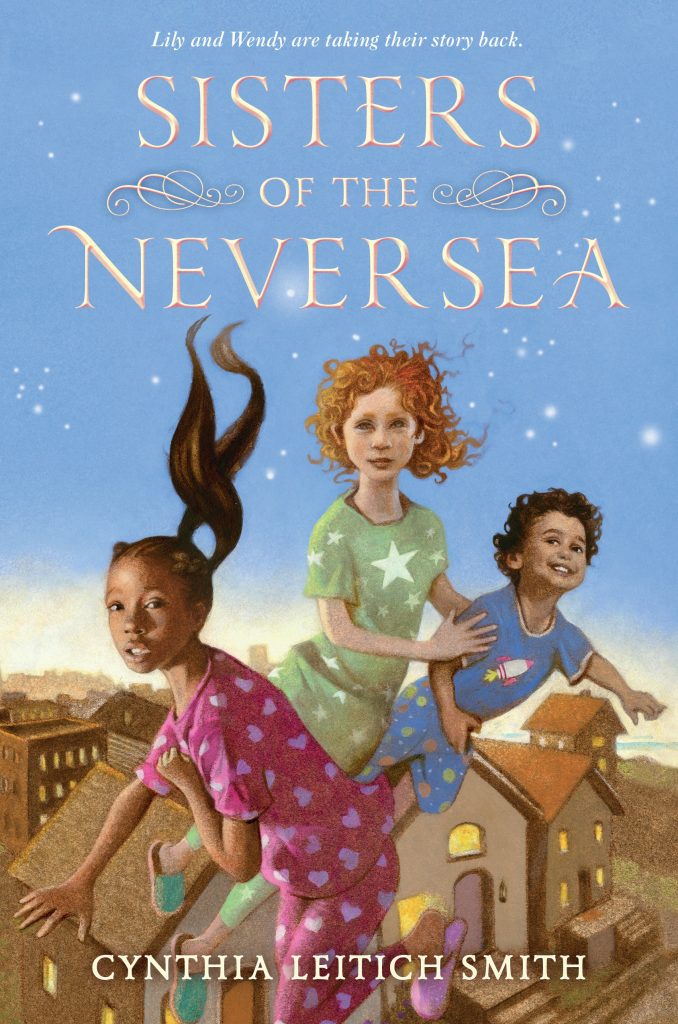 Lily and Wendy have been best friends since they became stepsisters. But with their feuding parents planning to spend the summer apart, what will become of their family—and their friendship?

Little do they know that a mysterious boy has been watching them from the oak tree outside their window. A boy who intends to take them away from home for good, to an island of wild animals, Merfolk, Fairies, and kidnapped children.

A boy who calls himself Peter Pan. 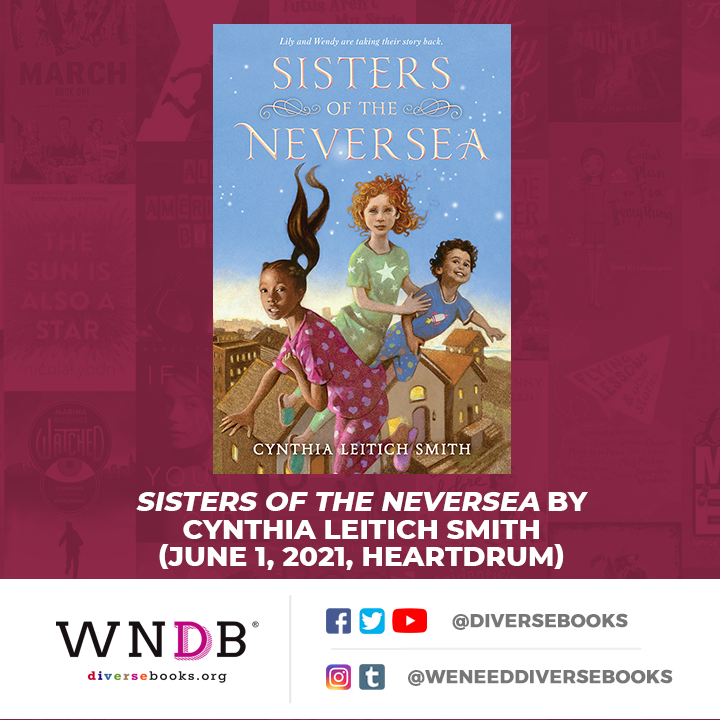 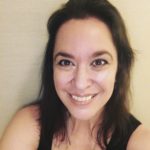 Cynthia Leitich Smith (Muscogee Creek) is the author-curator of Heartdrum at HarperCollins and a member of the MFA faculty in Writing for Children and Young Adults at Vermont College of Fine Arts. She grew up in Kansas City and graduated from the University of Kansas Journalism School and the University of Michigan Law School. She is a citizen of the Muscogee Nation and lives in Austin, Texas. Her books include: Hearts Unbroken, which won the American Indian Youth Literature Award in the YA division; Rain Is Not My Indian Name, for which she was named a Writer of the Year by Wordcraft Circle of Native Writers and Storytellers, the Tantalize series, the Feral trilogy, Jingle Dancer, and Indian Shoes. You can visit her online at www.cynthialeitichsmith.com.

Floyd Cooper (Muscogee Creek) received a Coretta Scott King Award for The Blacker the Berry and a Coretta Scott King honor for his illustrations in Brown Honey in Broomwheat Tea, both by Joyce Carol Thomas. Born and raised in Tulsa, Oklahoma, he received a degree in fine arts from the University of Oklahoma and, after graduating, worked as an artist for a major greeting card company. He now lives in Easton, Pennsylvania, with his wife and children. You can visit him online at www.floydcooper.com.