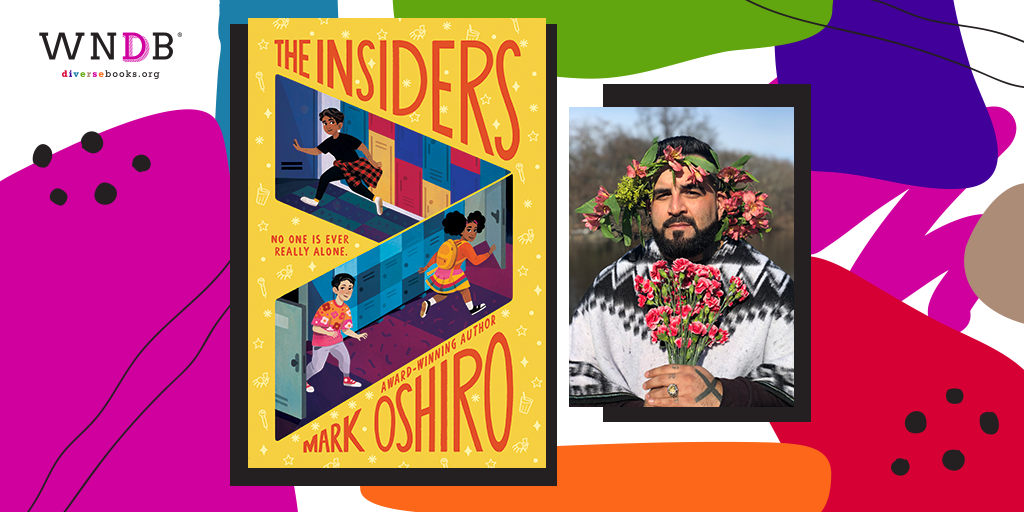 Today we are thrilled to reveal the cover for The Insiders by Mark Oshiro. Cover art by Helder Oliveira and book design by Jessie Gang. The book will be released on September 21, 2021, by HarperCollins. Read the first chapter of The Insiders below, and preorder here!

Back home in San Francisco, being gay didn’t mean feeling different. But at his new school in Orangevale, Héctor Muñoz stands out like a sore thumb in a sea of sameness. And Mike, the school bully, makes sure Héctor knows it.

Most days, Héctor resorts to hiding in the janitor’s closet. But one day, when the door closes behind him, Héctor finds a room suddenly filled with everything his heart desires: a couch, video games, and even his abuela’s famous horchata.

As if that weren’t bewildering enough, two more kids soon appear in Héctor’s unlikely hideaway. Juliana and Sal are from different corners of the country, and they each found the room for their own reasons. And as they learn more about the impossible room that’s brought them together, these three outsiders will open the door to a life-changing year of friendship, adventure, and just a little bit of magic. 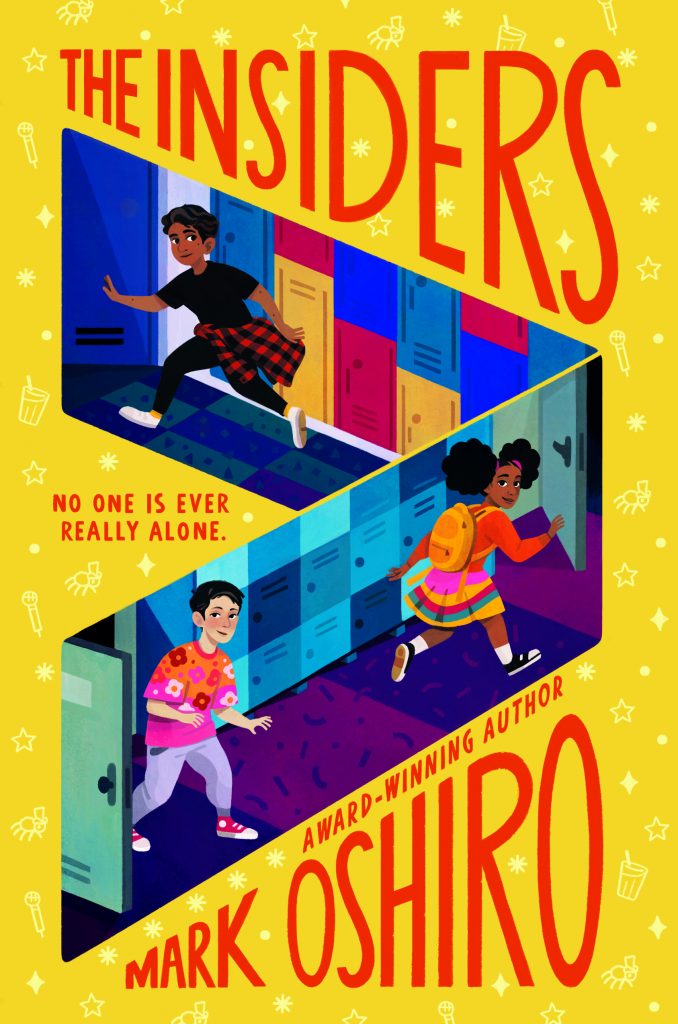 Literally. His mami glanced over at him from the driver’s seat and smiled. “You’re going all out, aren’t you?” she said.

“I have to!” he said, smoothing out the wrinkles on his black button-down. “First day and all. Gotta let them know what they’re in for.”

She turned the car onto the wide stretch of Madison Avenue. The streets were so much bigger here than anything he was used to back home in San Francisco. Well, not “home” anymore. It hadn’t been long since his family had moved to Orangevale, which was definitely not San Francisco.

He fell silent as his mother drove him to school. He wasn’t going to tell her how fast his heart was beating, or that he missed his friends. That he missed being able to walk through the Mission to school in the morning. That he missed the corner market off Valencia where the man behind the counter always joked about Héctor being too young for coffee.

So he fiddled with the tiny stuffed Eevee on his backpack.

He zoned out while staring at all the strip malls and gas stations and drive-through restaurants as they passed by.

He flicked the tiny bells he had sewn into the top strap of his bag.

“You’ll be fine, mijo,” his mami said as they slowed behind traffic. When he glanced up at her, her eyebrows were raised in concern. “You just be your wonderful self, and it’ll all be okay.”

“Depends on if your new classmates have any taste,” she said in a faux serious tone. “You might just be too cool for them.”

“And yesterday morning we saw a man wearing a cargo vest at the store.”

He nodded. “Also true. I did not know a person could need so many pockets.”

Mami turned off Madison toward the school. “What do you think he keeps in them?”

“Duh, Mami. His hopes and dreams.”

They both laughed at that, and Héctor was thankful he could joke as often as he did with Mami. He relied on humor a lot because it just made everything fun. He looked more like his papi than his mami. She was a lighter brown and her nose came to a point, and her face was framed with long black hair. Héctor had the black curls, the dark-brown skin, and the wide nose of his papi—but he got his jokes from Mami. Definitely.

He hoped that his humor would get him through this day.

Because there it loomed, off to the right and at the end of the block.

It was a single story. Sprawling. The green grass of the sports field stretched so far back that Héctor couldn’t even see the fence on the other side of campus. Did it go on forever? Probably. Everything seemed to in this town. Long streets, an endless horizon, so much space. There were no buildings leaning up against one another, no growing and diving hills with homes that seemed like they were riding the wave of the earth.

Other kids were streaming up the steps into the school, and he took a deep breath. “I can do this,” he said, almost to himself.

But his mami heard him. “I know you can,” she said, and then she reached over and grabbed his hand. “You’re amazing, mijo. You’re gonna make so many friends, and everyone is gonna love you.”

“They better,” he said, grinning. “I put on my best outfit for them.”

“Go impress ’em,” she said, then kissed him on the forehead. “Be the Héctor I know and love.”

“That’s a neat way to think of it,” said Mami. “You gonna join the drama club today?”

“If I can find it,” he said as he opened the car door and jumped out. “Papi is picking me up, right?”

She nodded, and Héctor blew her a kiss. He shut the door. She drove off.

And then it was time.

Héctor Muñoz stood at the bottom step, kids streaming around him and into the wide open double doors. So. This was his new school. It felt even stranger that his first day here was at the beginning of October, too. No matter; he had to make a good impression.

So he joined the flow, and moments later, he was inside his new school.

The halls were bright, the tile shiny, and the echoes of voices and scuffling shoes bounced around him. The energy felt . . . different. It wasn’t as loud here as his last school. No one was reciting a monologue in the hallway, or singing, or practicing a synchronized dance routine. There weren’t any kids running with a giant canvas hoisted on their back. As he counted six kids wearing green cargo shorts, he deeply missed Tim and Sophia, his best friends back in the Mission. I’ll have to text them, he thought, and he pulled out his phone.

“No phones out in the halls!”

The voice rang loud and clear, just off to Héctor’s left, and he froze in place, long enough for someone to bump into his backpack.

“Out of the way,” the girl whispered, and she looked Héctor from head to toe, then shook her head, her blond curls bouncing back and forth.

Seriously? he thought. Did she just judge my outfit?

But he had no time to say anything. A woman stood tall in front of Héctor, her arms crossed in front of her, and she wore a head-to-toe gray outfit: gray skirt, gray blazer over gray shirt, and a gray cloth headband pulling her brown hair back, with impeccably shined gym sneakers on her feet. Everything was perfectly matched.

“Young man, did you hear what I said?”

Héctor did, but he was still lost in all that gray. There was so much of it! Did she dress this way every day? He kinda respected that.

“Sorry,” he said, putting his phone back in his pocket. “I’m new here.”

She raised a brow high on her angular face, which only seemed to stretch it longer. “New?” she said. “Did you already go through registration?”

“Because there is an order to things here at Orangevale Middle School,” she said, cutting Héctor off. “You can’t just do as you please, young man.”

“Did you read our handbook on student conduct?” Seemingly out of nowhere, she produced a pale pamphlet and held it out. “Perhaps you need a refresher.”

“Ms. Heath, head of campus security,” she said, raising her chin higher. “And what is your name?”

“Héctor Muñoz,” he said, beaming up at her.

She scribbled something down. “Hmmm,” she muttered. “Well, off to homeroom. You do know where that is, right?”

“What did you write?”

“Mr. Muñoz, that is none of your business,” she intoned, her voice dropping in pitch. “Please continue to class, and remember: here at Orangevale Middle School, we follow the rules.”

Then she turned and walked off down the hallway, her gym shoes squawking loudly on the tile.

Well, that was odd, he thought. Why had she singled him out? Sure, he was new. Still, it wasn’t the best start to his first day.

A bell rang out. It was flat, an even tone, low and boring. Ms. Heath was still walking away, so he peeked at his phone. His homeroom class started in five, and after that, he’d meet all his new teachers. All his new classmates. Maybe there’d be a kid obsessed with musicals. Or even someone who just liked drama. At this point, he’d take someone who had visited a thrift shop once in their life. He just had to find his people, right?

Héctor stepped into his noisy homeroom class, believing that it could only get better. 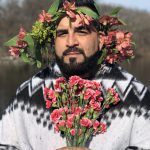 Mark Oshiro is the award-winning author of ANGER IS A GIFT (2019 Schneider Family Book Award) and EACH OF US A DESERT, both with Tor Teen. Their middle grade debut, THE INSIDERS, is out on September 21, 2021. When not writing, they run the online Mark Does Stuff universe and are trying to pet every dog in the world.