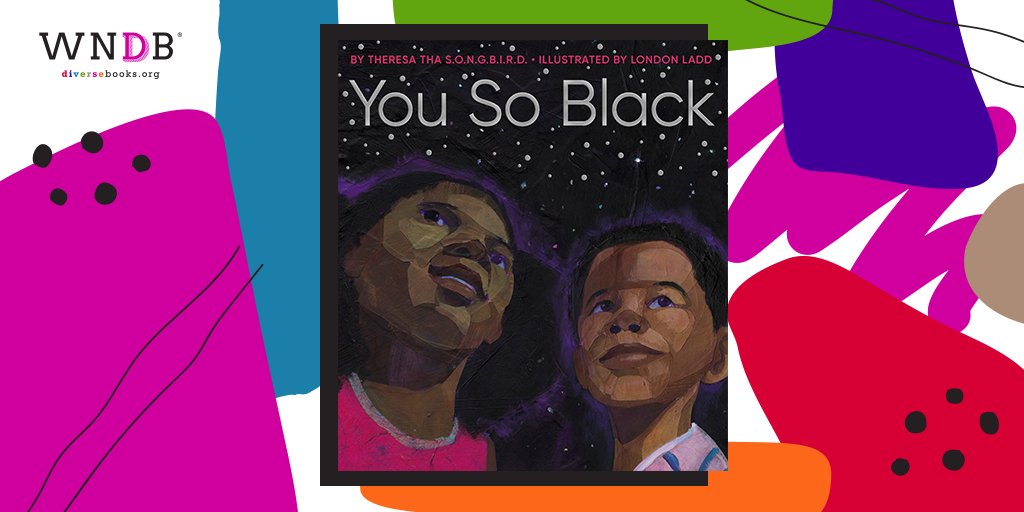 Today we’re excited to reveal the cover for You So Black by Theresa tha S.O.N.G.B.I.R.D., illustrated by London Ladd! The book will be released on January 10, 2023 by Denene Millner Books/Simon & Schuster Books for Young Readers. Preorder it here. Keep scrolling for an exclusive Q&A with both author and illustrator!

Based on Theresa Wilson’s (a.k.a. Theresa tha S.O.N.G.B.I.R.D.’s) beautiful, viral spoken word poem of the same name, You So Black is a picture book celebration of the richness, the nuance, and the joy of Blackness.

Black is everywhere, and in everything, and in everyone—in the night sky and the fertile soil below. It’s in familial connections and invention, in hands lifted in praise and voices lifted in protest, and in hearts wide open and filled with love. Black is good.

Accompanied by powerful yet tender illustrations by award-winning illustrator London Ladd, Theresa tha S.O.N.G.B.I.R.D. has adapted her poem, full of gorgeous lyricism and imagery, to show readers the love, joy, resilience, and universality in the beauty of Blackness. 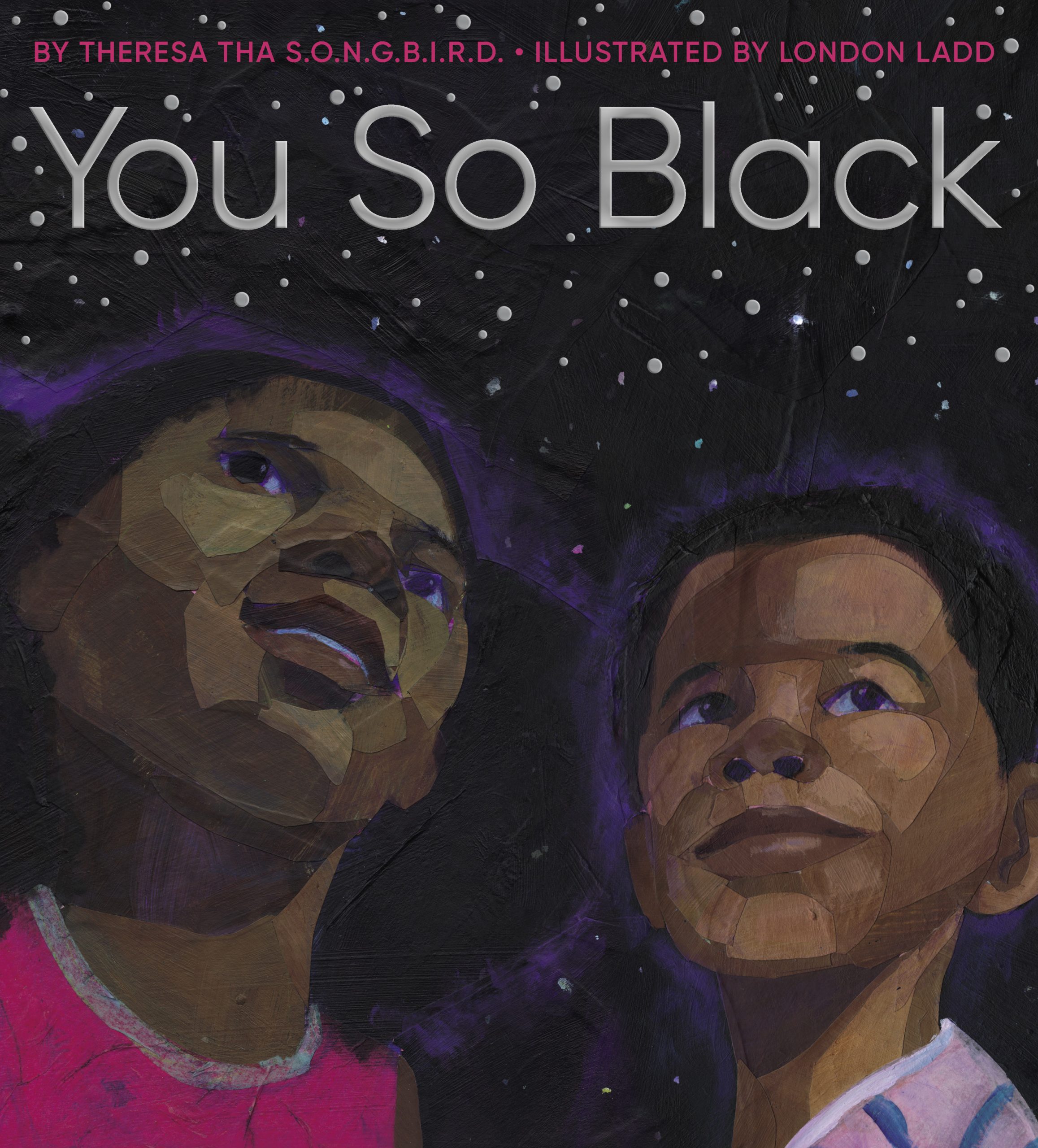 Theresa, your original poem has such a powerful, resounding message about being Black. What was the writing process like? Which poem(s) or poet(s) were formative influences in your life?

Theresa: Writing You So Black was an experience that brought me closer to my ancestors and to the strong connection of our past. The process really made me consider all of what the Diaspora has endured, and affirmations of hope and belief in where the future will take us. Influential poets in my life have been Rita Dove, Ruth Forman, Maya Angelou, and Shel Silverstein.

How closely did you collaborate on the illustrations for this book?

Theresa: I am a huge fan of London Ladd‘s artwork. Upon us coming together in collaboration, I really wanted him to run wild with creativity and be inspired by the words themselves. I am awestruck by what he has created. I can see myself in every page of illustration.

London, which was your favorite spread to work on, and why?

London: That’s such a tough question because it’s very difficult to pick one over the others. From a visual standpoint, one day it could be a particular page, then a few days/weeks later it could be another. But from an emotional standpoint it’s different. When I say emotional standpoint, I mean the process of how I tried to fuse Theresa’s powerful words and the cadence of her delivery into a visual narrative effectively that words and images become inseparable. Not to mention representing Blackness that is honest and impactful. That was my biggest challenge!! So if I put it in those terms, there are 4-5 that stand out from the others because I vividly remember all of the long hours of me thinking, researching, sketching, painting that it took to create them. They are not just images I created, but the deepest parts of my spirit laid out in those spreads.

What do you hope readers take away from this picture book, and what did you include for yourself?

Theresa: I hope that readers open this book and find a mirror. I hope that they see themselves in the powerful words, in the boldly colorful, beautiful pieces of art on each page. I hope that this book can instill in all of us a sense of connectivity and oneness through cultural uplifting and love.

London: That this book represents all Black people, not just in the United States but Black people from all across Earth. All generations past, present and future. My goal is that readers will see themselves within these pages, both written and visually with pride, strength, dignity, perseverance and power. To be a generationally shared book where the young people of today who read it will share with their kids and so on. My biggest takeaway was how much You So Black was imprinted into me!! During the time I was working on You So Black, I was also finishing my final year of my MFA in illustration at Syracuse University. At first my subject was going to be something else but I changed my written and visual thesis to be centered around Blackness and representation. Illustrating You So Black was an amazing experience that filled me with so much joy, strength, love, power, self-esteem and pride. All of those feelings poured into this book.

Theresa tha S.O.N.G.B.I.R.D. is a musical, lyrical and theatrical alchemist, sprinkling magic like hot sauce. The Grammy nominated sensation is best known for her appearance on the 2019 Trumpet Awards on Bounce TV, and the now viral recitation of “You So Black,” which has garnered 11 million views and counting. She has gone on to perform with the likes of Jill Scott, MC Lyte, and Jasmine Sullivan, and appears on famed pianist Robert Glasper’s newest album. Theresa is from the south suburbs of Chicago but calls Atlanta home. She holds a degree in commercial music from Millikin University in Decatur, Illinois.

London Ladd is a graduate of Syracuse University with an MFA in illustration. He uses a unique mixed media approach, combining cut paper textured with acrylic paint, tissue paper and colored pencil to bring his diverse subjects to life. London’s artwork is steeped in intensity and emotion, a reflection of the artist himself. His hope is that You So Black will be passed down through generations, reaffirming African Americans’ strength, beauty, power and love. His goal is to open a visual arts community center where lower-income families can create their own art. London lives in Syracuse, New York.

Previous Post: « Exclusive Excerpt Reveal for We Deserve Monuments by Jas Hammonds
Next Post: What Winning a Creative Writing Award Means to the 2022 Winners »
Today on the WNDB blog: a debut picture book about