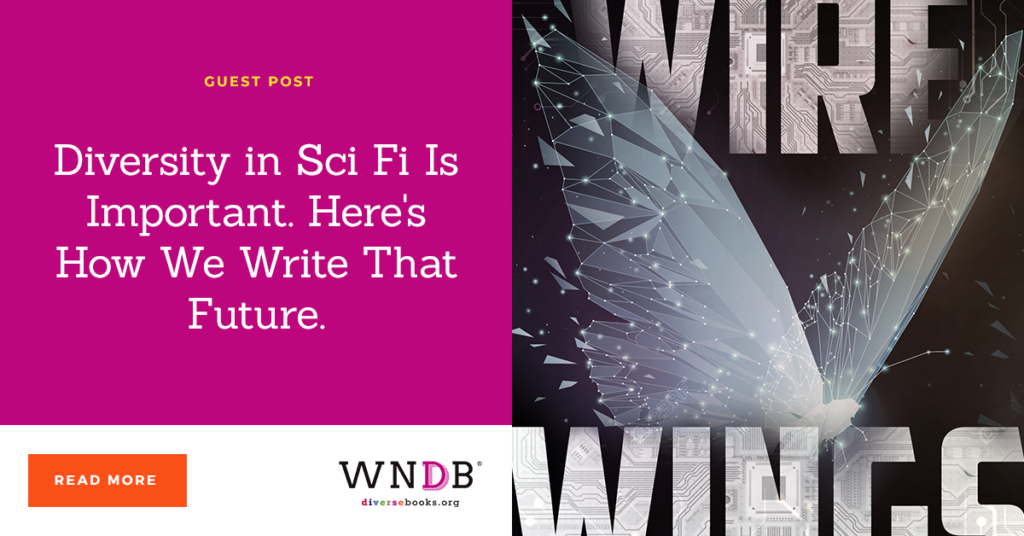 Wire Wings by Wren Handman was published on June 23, 2020. Purchase it here.

We open on Earth, building staircases into the stars. The International Space Station grows and develops. We see first contact with alien life, as a white man in a spacesuit shakes the hand of a strange, unknowable creature. Soon there’s another creature and another man. We now see a third being, one who resembles nothing like what we consider life on Earth, and shaking its hand is…another man?

Science fiction is all about exploring our imaginations. It pictures alien environments, races we’ve never seen, and technology we can only dream about. It gives us a playground on which to build life as we’ve never seen it before! But too often, the worlds we’re exposed to in fiction haven’t taken the opportunity to dream bigger and better. Too often, they feature straight white men in positions of power, women struggling to prove themselves in a sexist, classist society, and North America seemingly ruling the galaxy.

The scene I described above is from Valerian and City of A Thousand Planets, which drew criticism for 28th-century gender roles that were decidedly stuck in the 20th century. But can our science fiction literature do better? And what responsibility do we, as writers, have to portray a world that isn’t entrenched in modern culture?

Before I dive in too deeply, I want to take a moment to say that we are at an important turning point in the conversation about diversity, and especially race, in society and literature today. There are some incredibly powerful and important voices speaking on the topic, and I highly encourage you to read the links below and get better educated on the question of race in young adult books. As a white queer woman, it isn’t my place to take space from that conversation. So today I’m going to focus on elements that I can personally reflect on, namely gender and sexuality.

And when we look at gender and sexuality in young adult fiction, it’s easy to see two things.

First, let’s talk a little about young adult science fiction. Science fiction is a pretty broad category, and it covers a whole lot of books. Basically, anything set in the future is science fiction, whether that’s thirty or 3,000 years from now. Sci-fi generally includes an emphasis on technology that doesn’t exist today, and usually, that technology has a basis in real science (though things like Star Wars certainly break that rule!). The Weight of the Stars by K. Ancrum is a great example of near-future sci-fi, while The Disasters by M.K. England jumps all the way to 2194 to tell its story.

Those novels are both set on or near Earth, but sci-fi doesn’t have to be a progression of our own future. As long as it’s set in space and has technology we don’t, it can even include a little magic in the mix. Carve the Mark by Veronica Roth is an example of a novel that has magic and spaceships.

As far as sub-genres of the incredibly popular YA bucket go, science fiction isn’t considered one of the big ones. In fact, when I search for YA sci-fi lists on Goodreads, I have to scroll down quite a bit before I even hit a list that’s related to my search term. When I finally found a list called Best Intro to Science Fiction for Young Readers, only two of the top ten books were published in the last twenty years, and in my mind calling The Hunger Games sci-fi is pushing the definition. (A lot of dystopian fiction certainly counts as sci-fi, but the lack of focus on technology in The Hunger Games discounts its addition to the catalog, in my view. That being said, they certainly do have technology in The Capitol that doesn’t exist today, so maybe it belongs in a sub-category of sci-fi with other similar books, like The Maze Runner.)

When I set out to publish Wire Wings, I was told by several publishers and a few agents that “young adult science fiction just doesn’t sell.” This was several years ago, and I only had a few solid examples I could use to argue they were wrong. The Lunar Chronicles by Marissa Meyer was highly-acclaimed and selling well, but that was a fairy-tale retelling, which came with a built-in audience. Everyone of a certain age read The Giver by Lois Lowry in school, but it was long ago enough that publishers didn’t see it as proof of sellability. They just weren’t sure that teenagers wanted to read sci-fi.

They sure were proven wrong!

Luckily, not every publisher felt the same as the ones I talked to, and today, just a few years later, the market has been flooded by fresh voices bringing young-adult science-fiction back into focus. As early as 2017, Dare Mighty Things by Heather Kaczynski featured an asexual main character, which is a triumph for so many reasons. Asexual representation in fiction is still close to non-existent, young adult books that aren’t romance-forward are very rare, and (mostly importantly) being asexual is normal in their world. No one is shocked. When Cassie comes out to Mitsuko, she isn’t asked if she’s sure, or if she has some hidden trauma that’s given her to asexuality. No one suggests she get therapy before she decides how she feels.

That’s the lure of what sci-fi can do for diversity. It can present a world where the fights we’re fighting today have been won. It can show us that it’s possible for our future to be as bright as the fictional worlds we’re reading about. For people to be accepted for who they are—or at least, hated for new and different reasons!

That doesn’t mean that everything in science fiction has to be rosy and bright. But it’s frustrating when what should be main-stream ideas are relegated to the sidelines just for being diverse. Take The Weight of the Stars, which one reviewer said would be satisfying for readers “drawn to the unconventional.” What does that even mean? “Unconventional”? As if having diverse characters and a queer love story somehow makes the story itself marginalized? As if the majority aren’t interested in reading about minorities?

Thankfully, writers and readers are both proving that reviewer wrong every day. The appetite for diverse fiction stretches across axes of oppression. Everyone wants to read stories that are fresh, and most especially right now that means including underrepresented groups in your fiction. Especially when those underrepresented groups are represented every day in the world around us. Whether that’s better bisexual representation, queer love stories, worlds without sexism, genderqueer characters (800 percent more characters who use they/them pronouns, please!), and futures that reflect over cultures, religions, and races, audiences are ready for sci-fi that makes it all conventional. 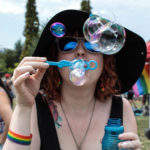 Wren Handman is a novelist and screenwriter from Vancouver, Canada. All of her stories are connected by one thing: the magical blended with the everyday, because she secretly wishes magic was real. And who’s to say it isn’t? You can find Wren spending way too much time on Facebook, while she isn’t crafting, reading, or plotting her next adventure.