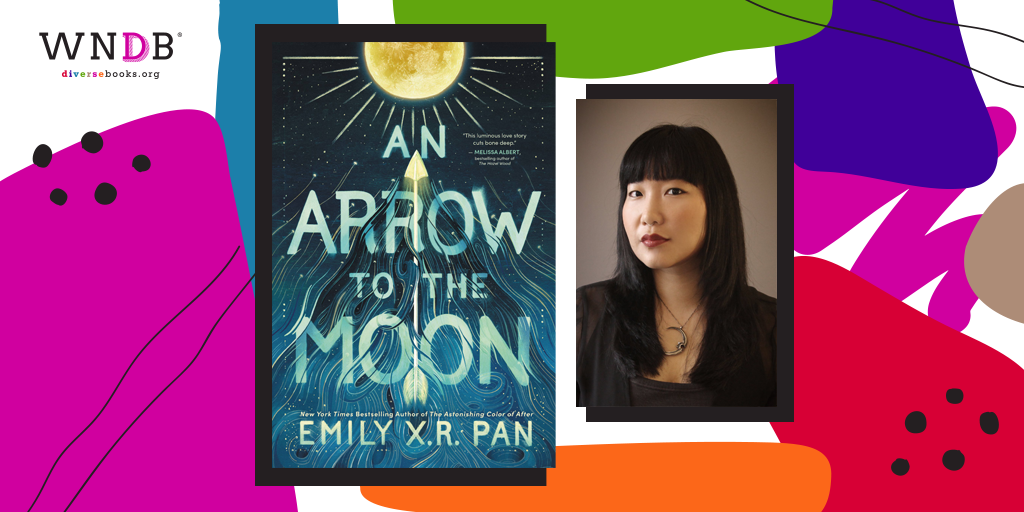 Hunter Yee has perfect aim with a bow and arrow, but all else in his life veers wrong. He’s sick of being haunted by his family’s past mistakes. The only things keeping him from running away are his little brother, a supernatural wind, and the bewitching girl at his new high school.Luna Chang dreads the future. Graduation looms ahead, and her parents’ expectations are stifling. When she begins to break the rules, she finds her life upended by the strange new boy in her class, the arrival of unearthly fireflies, and an ominous crack spreading across the town of Fairbridge.

As Hunter and Luna navigate their families’ enmity and secrets, everything around them begins to fall apart. All they can depend on is their love…but time is running out, and fate will have its way.

An Arrow to the Moon, Emily X.R. Pan’s brilliant and ethereal follow-up to The Astonishing Color of After, is a story about family, love, and the magic and mystery of the moon that connects us all. 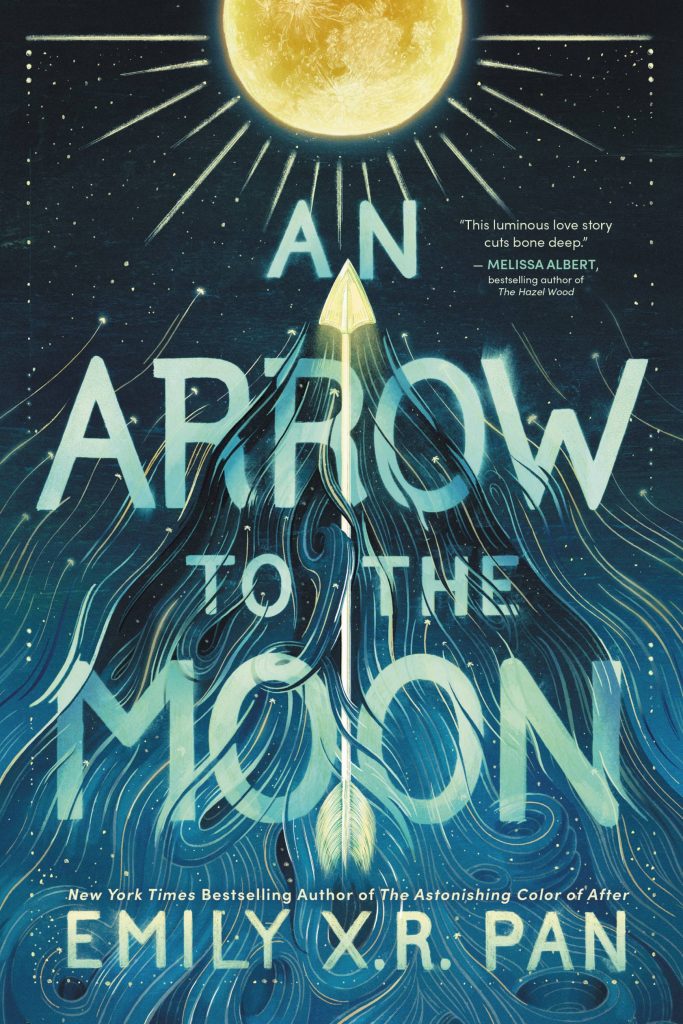 Frankly, everything that Emily X.R. Pan said during our hour long phone interview was brilliant and show-stopping and I wish you all could have been flies in the phone lines eavesdropping on it. But you can’t, so I’m going to do my best to bring life to her words! Emily is the author of 2018’s bestselling and award-winning The Astonishing Color of After, and her sophomore YA novel An Arrow to the Moon releases April 12, 2022.

Pitched as Romeo and Juliet meets Chinese myth, An Arrow to the Moon is a lyrical, beautifully-crafted tale of star-crossed love that left me reeling and borderline sobbing when I finished it, feeling like my heart had been touched by a shooting star. As a fan of Emily’s since her 2018 debut, I jumped at the chance to chat with her and ask her all my burning questions.

As a child, Emily said her father told her stories, including the stories about Huoyi and Chang’e, the Chinese folklore that An Arrow to the Moon retells.

“Anytime I saw a retelling that was based on the story I had been raised with, it was never through an American lens,” Emily said. “I wanted to write a story that was very much Asian American. I think of myself as writing aggressively American stories that are about Asian American teens who are in diaspora, part of the community of children of immigrants…feeling like they have a foot in two different worlds or more. I wanted to capture that.”

In addition to retelling the story of Huoyi and Chang’e, Emily incorporated Shakespeare and, she said, wanted to feature a story with an Asian American love interest.

“It’s a very strange experience to feel like the only people who are attractive and eligible are white people,” Emily said. “It was very important to me to at some point tell a love story where both of the main characters are Asian American, are presented as being attractive, worthy of being crushed on, of being sexual.”

The book features multiple point-of-view (POV) characters, and is what I would describe as a very complex story. I was fascinated as I read it by the way Emily managed to weave all the story threads together to create one rich, coherent tale. Her response was that it very much happened organically, as she wanted to include POVs for both Hunter and Luna, her main characters, and then expanded outward as she realized she needed to include their parent’s POVs as well to really flesh things out.

“In order to really capture the experience for Hunter and Luna, I realized I had to show what their families were like and what their family expectations were like,” Emily said. “I wanted their experiences with their families to go in opposite directions. I had to show you what things looked like from their parents’ POVs. It started out as just me journaling to figure out what would their mom/dad be thinking…what would they be concerned about?”

Eventually, those journal entries made it into the novel, and so Emily wound up with eight POV characters.

Emily shared with me that her least favorite part of writing—any book, not just this one—is the pressure that comes with feeling like someone is watching over her. She said writing is different now that she has a book published and another one on the way, and there’s more pressure. At the same time, there is still joy to be found in the writing process.

“My favorite part of writing is when I have the lightbulb moment and I solve a puzzle that I’ve been mulling over,” she said. “Usually in the revision stages when I have something that I’ve been trying to make better—suddenly there’s that lightbulb moment where I realize that I had the solution all along in something that I had written back in the first or second draft, and I feel like a genius.” 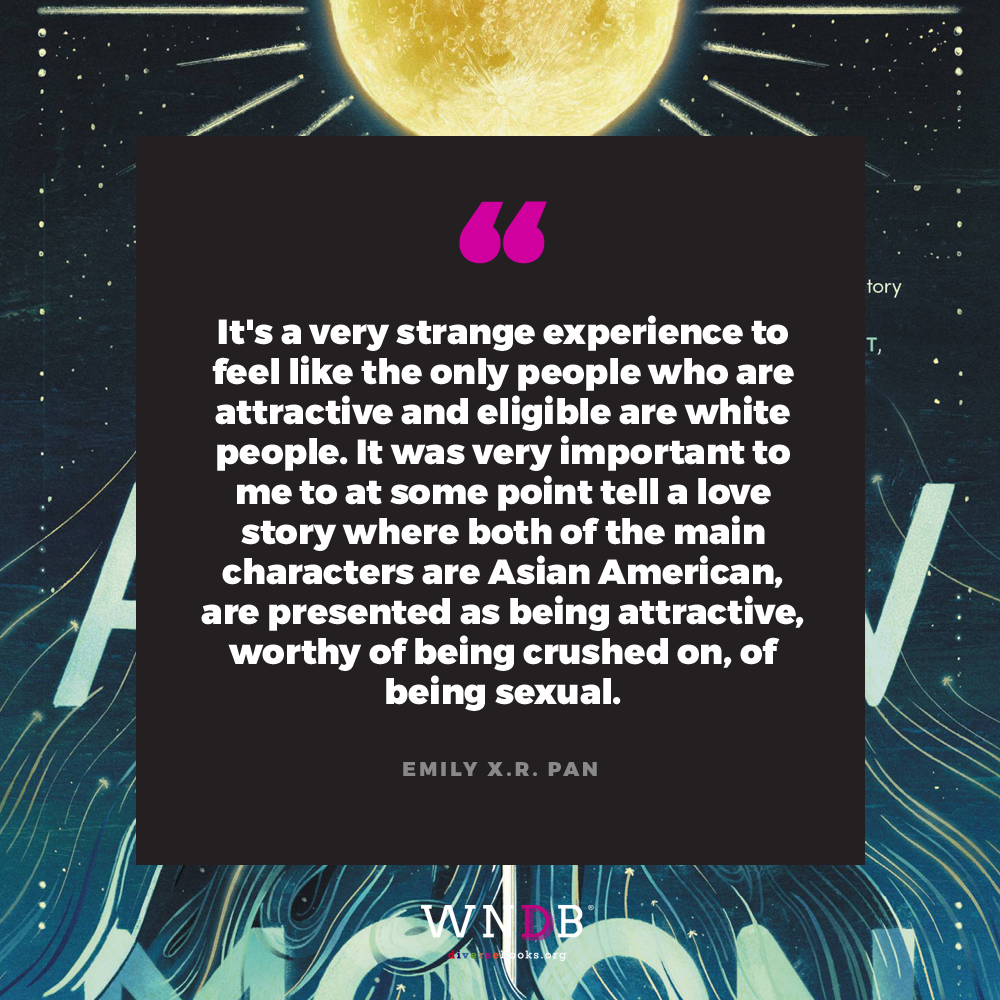 During our conversation, Emily also shared that she first conceptualized this book in 2017—before her debut had even been published. She said over the years of drafting and revising, she battled doubt that she would be able to write the story she wanted to tell, in the manner in which she wanted to tell it. And she added that there was pressure following the success of The Astonishing Color of After.

“[I was] struck with impostor syndrome and pressure following the reception of my first book,” she said. “[But] I’m so proud of the way it turned out, in a way that I don’t think I’ve ever felt before…every time I’ve picked up [An Arrow to the Moon] and flipped through it, I’ve felt this swell of pride again. That’s exhilarating.”

One specific story aspect that jumped out at me while I read the book was that Emily didn’t shy away from touching on a fraught geopolitical question: that of Taiwanese identity. Though the book provides no hard and fast answers, Hunter, Luna, and their parents discuss the matter and Emily presents it to her readers in a way that I found brave and nuanced.

“It’s a very tricky topic and I wrote it into this book as a way to get people thinking about it, but it was a very scary thing to write,” Emily said. “Something that I think is so important about the act of pinning words to the page and sharing them in the form of a story is this question…what is the point of stories in our current climate of fake news, people who want to micromanage how other people identify, feel so strongly about what’s wrong and right?”

Emily wrote out the “murkiness,” as she put it, of this question, and said she finds it important for writers to do things like that—to write the questions that plague us, even when we don’t have the answers.

As for future projects she’s looking forward to working on, Emily shared that she has a few super-secret projects in the wings. In addition, she said she’s planning an in-person launch event for An Arrow to the Moon, and is thrilled.

In addition to sharing about An Arrow to the Moon, Emily gave a few book recommendations.

“Everybody has to read Last Night at the Telegraph Club [by Malinda Lo],” she said. “It captures so much of history, Asian American and queer history, it’s just…a groundbreaking piece of work. I cannot recommend it enough…I loved The Mirror Season by Anna-Marie McLemore, which deals with the really tricky topic of sexual assault, of trauma, but it does so in the really beautiful story about coming back to oneself, magic, descriptions of beautiful pan dulce being made, my mouth is watering just thinking bout it.”

Two other books Emily recommended are Cemetery Boys by Aiden Thomas—“It’s groundbreaking in so many ways”—and Legendborn by Tracy Deonn—“It’s so incredible the way that magic is explored, colonialism is explored, that feeling of being othered, of not belonging, and figuring out how to stake your claim, stand up for yourself, have the agency that you deserve to have, unpack biases that you hear from different directions and be able to harness your power and step up to that.” 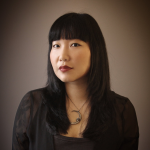 Emily X.R. Pan lives on Lenape land in Brooklyn, New York, but was originally born in the Midwestern United States to immigrant parents from Taiwan. Her debut novel, The Astonishing Color of After, was a New York Times bestseller, winner of the APALA Honor and Walter Honor awards, a finalist for the L.A. Times Book Prize, longlisted for the Carnegie Medal, and featured on over a dozen best-of-the-year lists. She received her MFA in fiction from the NYU Creative Writing Program, where she was a Goldwater Fellow and editor-in-chief of Washington Square. She was the founding editor-in-chief of Bodega Magazine, and went on to co-create the FORESHADOW platform and anthology. An Arrow to the Moon is her second novel. Visit Emily online at exrpan.com, and find her on Twitter and Instagram: @exrpan.

Previous Post: « Q&A With Christina Matula, The Not So Uniform Life of Holly-Mei
Next Post: Q&A With Monica Zepeda, Boys of the Beast »
Agents: @literaryagentsofchange is looking for men