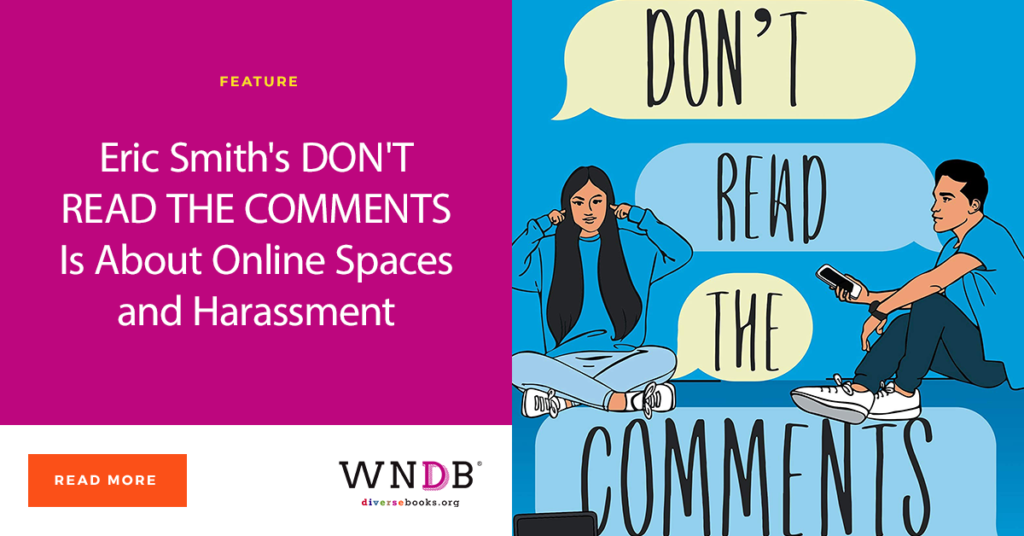 Eric Smith is an author (most recently of Don’t Read the Comments) and literary agent at P.S. Literary, meaning his professional life is wrapped up in writing and reading in so many ways.

Before getting into being an agent, Smith worked in publishing at Quirk Books for about six years, saying of his time there, “I loved it, it was so much fun, but I really wanted to get into working on my own kind of books and doing specifically what I wanted to do—you know, very selfish,” he added, laughing.

The most rewarding thing about agenting, to Smith, is getting on a call with an author to let them know their dreams are coming true.

“There’s a lot of crying (mostly from me),” he said. “I love being able to do that for other people.”

As for why he writes, himself? Smith said his answer to that question has changed since the birth of his child, saying his earlier YA novels were written “for a past version of me.”

“I used to write for myself and now I feel like I write for him and kids like him,” Smith said of his son. “Now that I have this little boy at home, I’m thinking about him all the time—how will what I write now affect him later, how can I write something that he’ll be proud of.”

Smith’s latest novel, Don’t Read the Comments, was published Jan. 28th by Inkyard  Press / Harlequin. It’s the story of Divya, a teenage girl gamer who undergoes a harassment campaign for her live streams; and Aaron, a teenage guy who meets Divya in the world of the latest game they’re each playing, Reclaim the Sun.

The book spends much of its time in-game, with Divya and Aaron exploring the world of Reclaim the Sun. Smith said that figuring out how the game was going to work in the book was actually a highlight of the writing process.

“In the book, it’s sort of a mash-up of a bunch of different video games,” he said, citing names like World of Warcraft and No Man’s Sky and saying they were all “smushed together.”

“The original version of the game in the book was almost way more sci-fi,” he added. “But I had a very, very smart editor who was like, ‘You need to keep this way more contemporary.’ And that helped me ground the game a little more. It had to feel like this game could exist now.”

Ultimately, as the novel is contemporary, Smith’s creation couldn’t be so advanced that it veered into far-fetched, impossible territory.

As for a challenge, here’s where Smith’s editor came in again, this time requesting he add about 30,000 words to the book (it was originally 58,000 words long, so that meant nearly adding half the whole book again).

In addition, there’s a romantic element to the book, which Smith said was a challenge to develop.

“I’m a big insta-love person, I don’t feel like I’m great at writing romance no matter how much I like it.” To figure out how to make it work, he researched by reading many YA rom-coms, citing Lauren Morrill specifically.

The inspiration for the book comes in part from real-world events, including upsurges in harassment in the video game industry around the time Smith started writing the book.

“It was devastating seeing friends and people I cared about leaving their digital spaces because they didn’t feel safe anymore,” he said. Smith’s guiding question as he wrote the book was, “What would it feel like if my safe space was taken away from me simply because people thought I was ‘different’ and I didn’t belong there?

“I also had my fair share of bullying when I was a younger geek,” Smith shared, “so a lot of that worked its way into the book.”

Smith believes in the power of books to make the world a better place, saying he hoped Don’t Read the Comments could be both enlightening and hope-giving.

“I’m a big believer in the whole…books create empathy and I hope that maybe some kid will read this book and think twice before going after someone online. Or, maybe the person reading it is the one on the receiving end of that and knows that they’re not alone.”

Speaking of books, two new releases that Smith highly recommended were Ashlords by Scott Reintgen—“wild horses that are phoenixes, it sounds awesome,” — and Not so Pure and Simple by Lamar Giles, of whom Smith said, “he should be a household name in kidlit.”

As for future work from Smith himself, look out for Battle of the Bands, an anthology he is co-editing with Lauren Gibaldi, slated for 2021, an intersecting collection of stories surrounding a battle of the bands night at one high school featuring stories by a collection of popular YA authors.

Previous Post: « Queerness Is Front-And-Center in REVERIE by Ryan La Sala
Next Post: How to Support Latinx Authors and #DignidadLiteraria »
Native writers: applications for the 2023 Native C