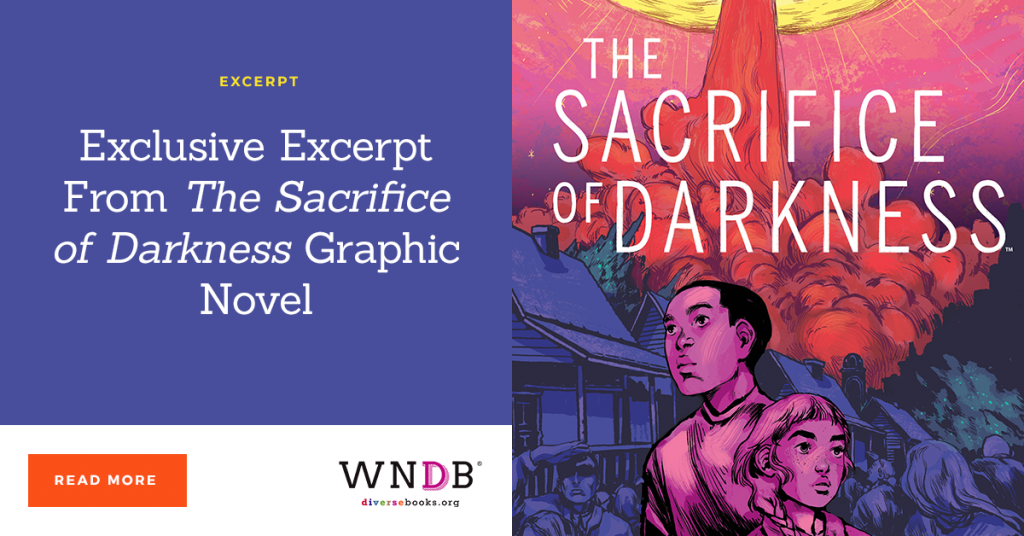 Today we’re pleased to reveal an exclusive excerpt from graphic novel The Sacrifice of Darkness by Roxane Gay and Tracy Lynne Oliver with art by Rebecca Kirby and James Fenner, which publishes on October 25, 2020. 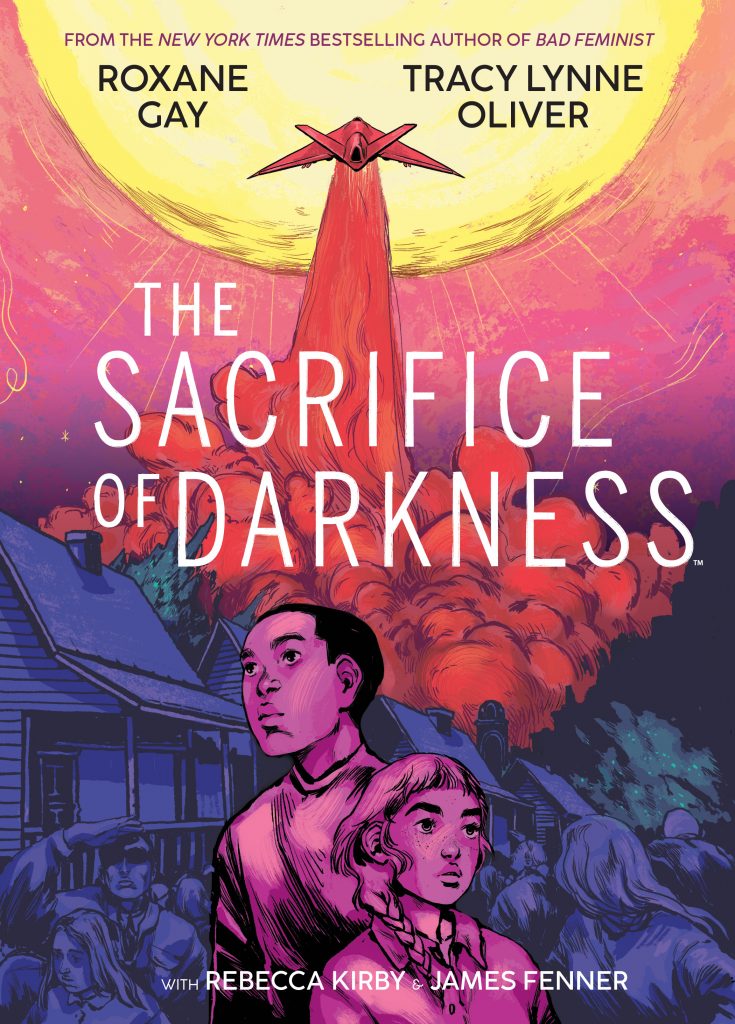 “When I was a young girl, my husband’s father flew an air machine into the sun. Since then, the days have been dark, the nights bright.”

Follow one woman’s powerful journey through this new landscape as she discovers love, family, and the true light in a world seemingly robbed of any. As she challenges notions of identity, guilt, and survival she’ll find that no matter the darkness, there remains sources of hope that can pierce the veil. 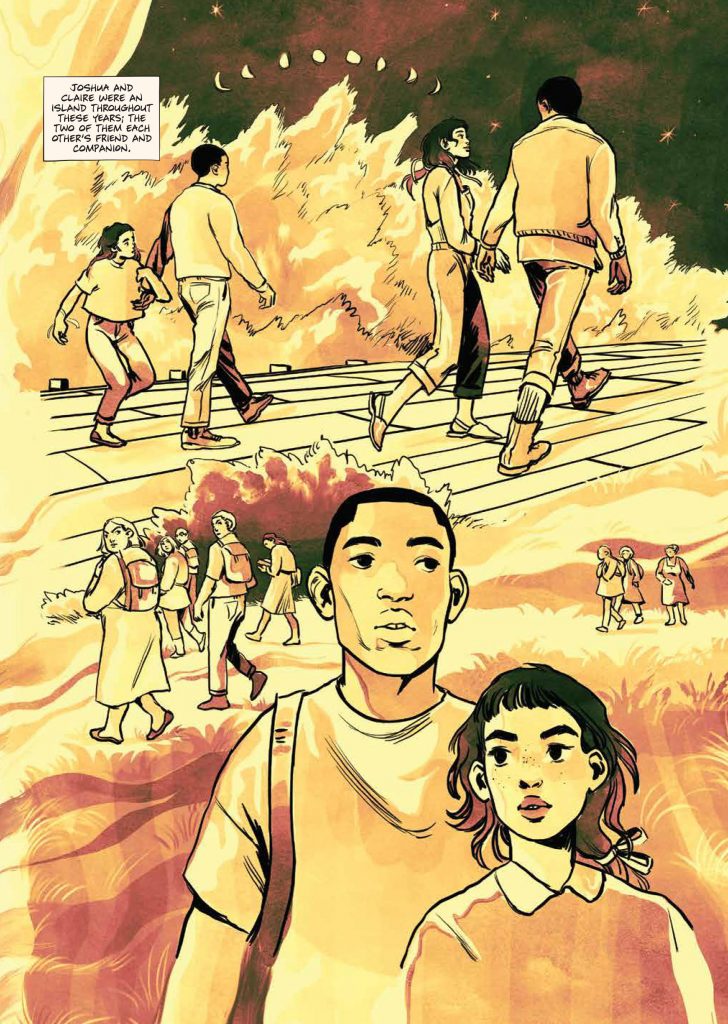 Caption: Joshua and Claire were an island throughout these years; the two of them each other’s friend and companion. 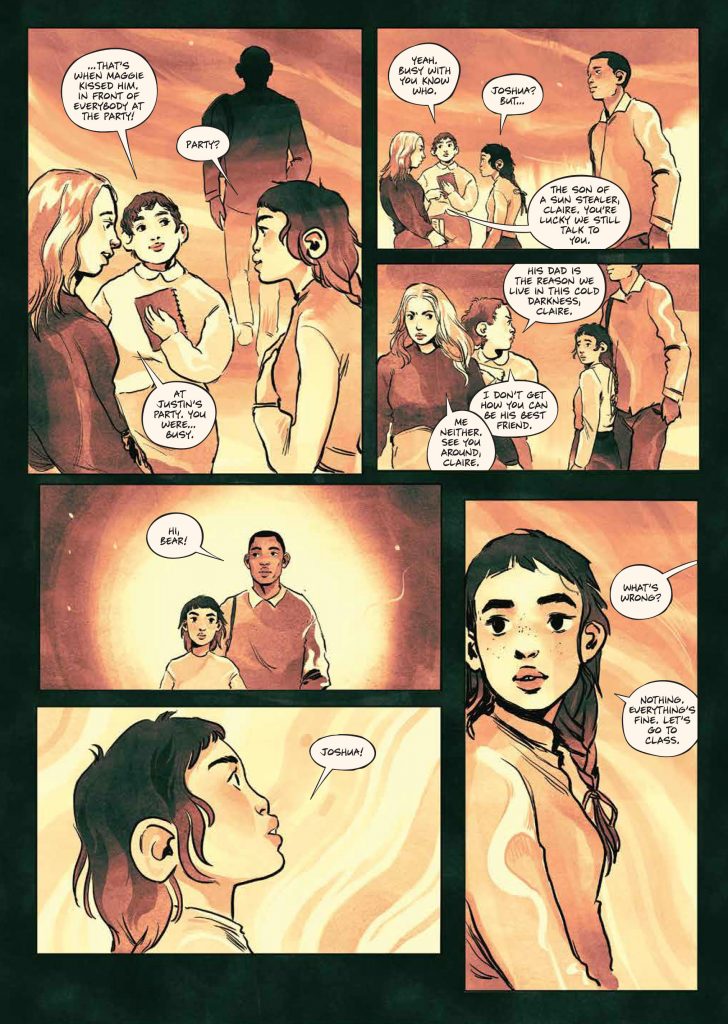 Friend 1: … That’s when Maggie kissed him, in front of everybody at the party!

Friend 2: At Justin’s party. You were…busy.

Friend 1: Yeah, busy with you know who.

Friend 2: The son of a sun stealer, Claire. You’re lucky we still talk to you.

Friend 1: His dad is the reason we live in this cold darkness, Claire. I don’t get how you can be his best friend.

Friend 2: Me neither. See you around, Claire. 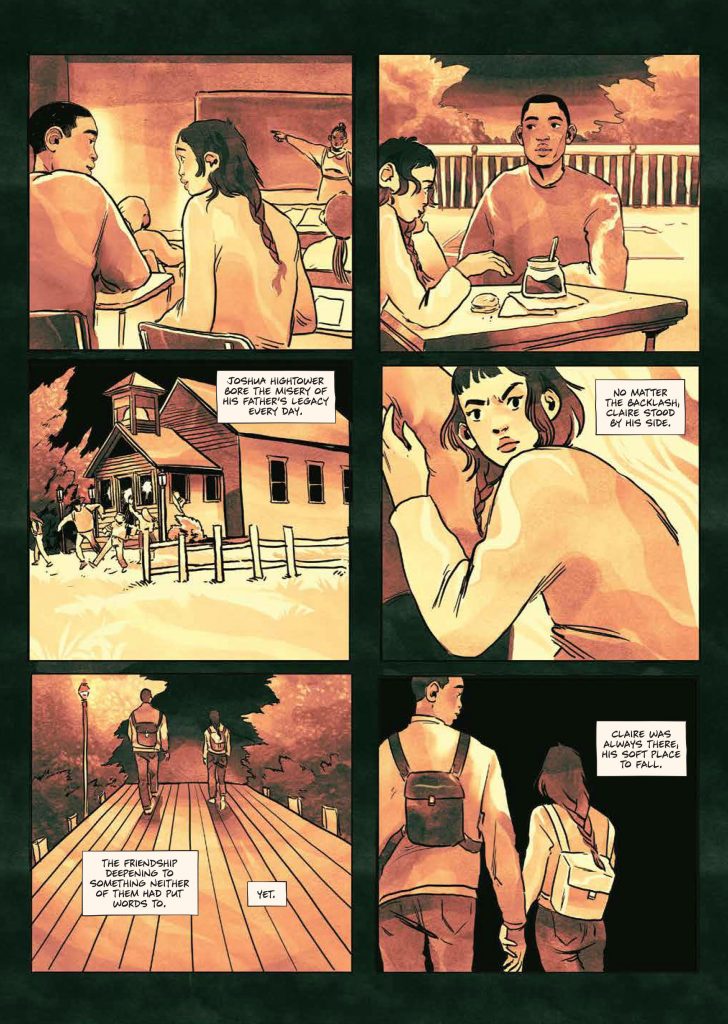 Caption: Josuha Hightower bore the misery of his father’s legacy every day.

Caption: No matter the backlash, Claire stood by his side.

Caption: The friendship deepening to something neither of them had put words to.

Caption: Claire was always there, his soft place to fall. 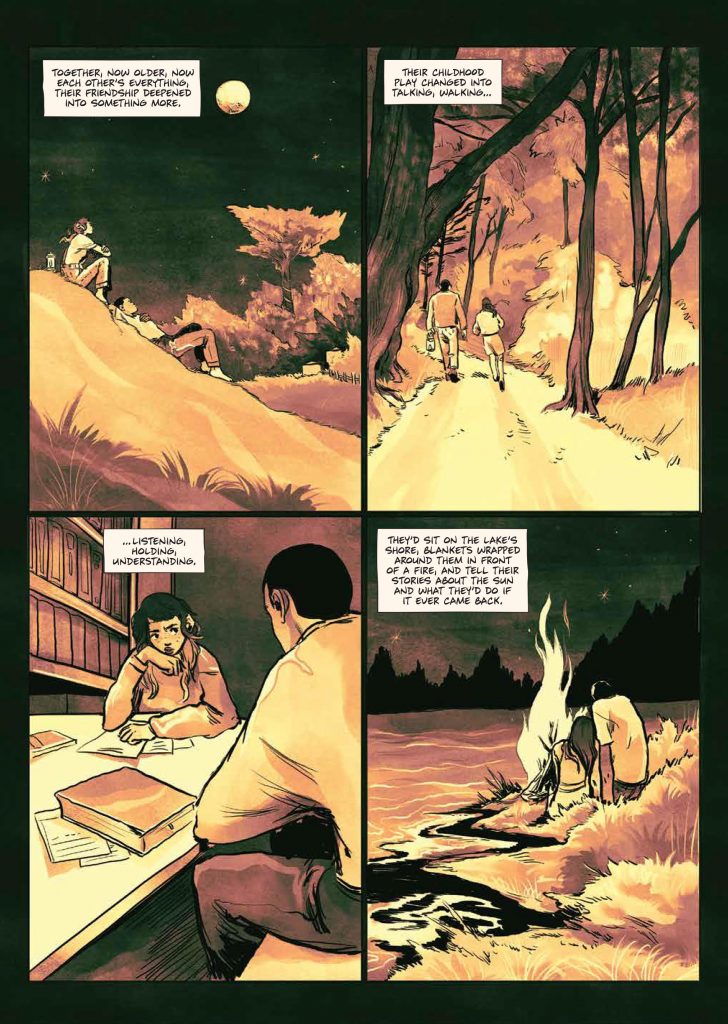 Capton: Together, now older, now each other’s everything, their friendship deepened into something more.

They’d sit on the lake’s shore, blankets wrapped around them in front of a fire, and tell their stories about the sun and what they’d do if it ever came back. 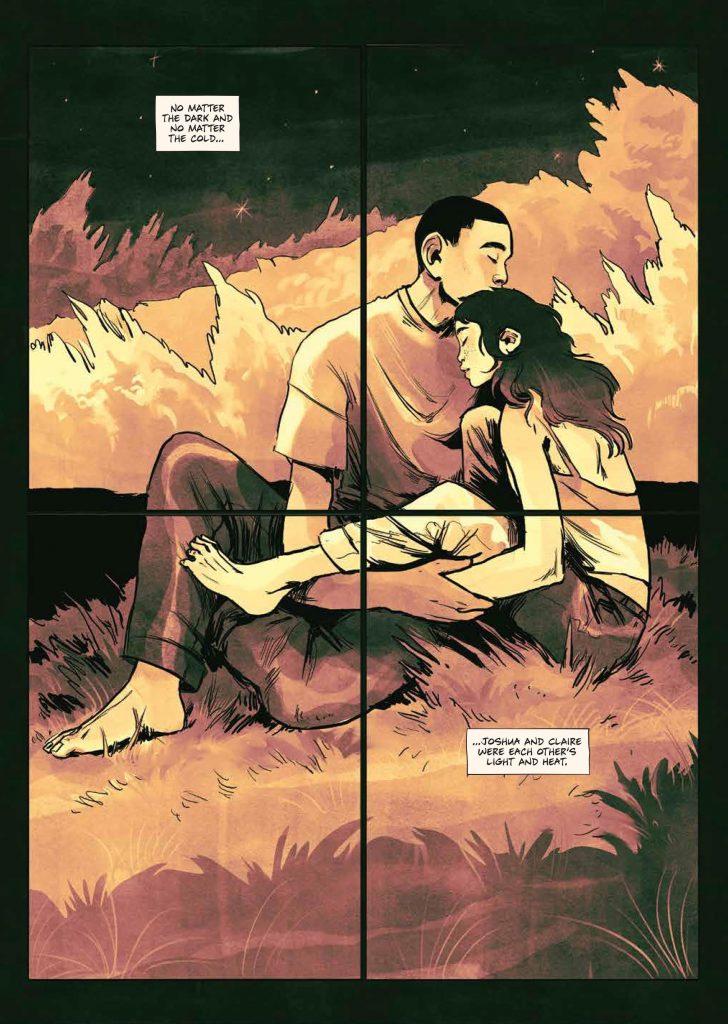 Caption: … Joshua and Claire were each other’s light and heat. 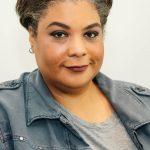 Roxane Gay’s writing appears in Best American Mystery Stories 2014, Best American Short Stories 2012, Best Sex Writing 2012, A Public Space, McSweeney’s, Tin House, Oxford American, American Short Fiction, Virginia Quarterly Review, and many others. She is a contributing opinion writer for the New York Times. She is the author of the books Ayiti, An Untamed State, the New York Times bestselling Bad Feminist, the nationally bestselling Difficult Women and the New York Times bestselling Hunger. She is also the author of World of Wakanda for Marvel. She has several books forthcoming and is also at work on television and film projects. 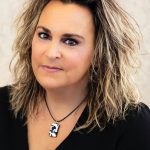 Tracy Lynne Oliver is attempting to make a new name for herself in this writing game. She has a magical novel that is anxious to see the light of day as well as a monstrous short story collection. If you know what’s good for you, you’d contact her ASAP to call dibs on this greatness before you lose the next literary Beyonce. In the meantime, you can read her essay, “Love Letters“ in Medium’s “Unruly Bodies” series or wait for her graphic novel, “Sacrifice of Darkness” an adaptation of Roxane Gay’s short story from Difficult Women, coming in October 2020 from BOOM! Studios.

Previous Post: « Cover Reveal for The Ghosts We Keep by Mason Deaver
Next Post: How Picture Books Help Young Readers Travel the World »
Applications are open for Literary Agents of Chang