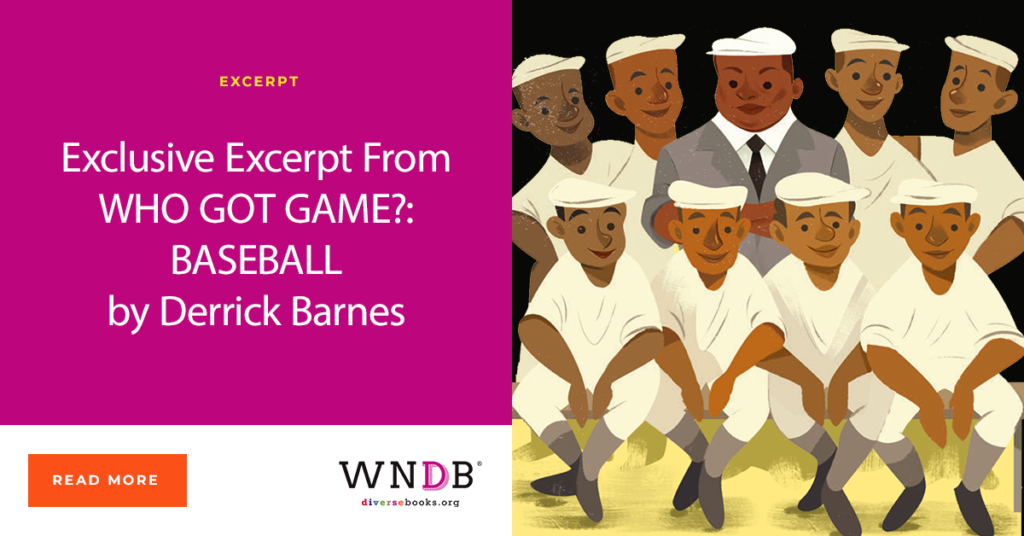 We are thrilled to publish an excerpt from Who Got Game?: Baseball: Amazing but True Stories! by Derrick Barnes, illustrated by John John Bajet, out on March 17, 2020, from Workman Publishing.

From the author, Derrick Barnes: Who Got Game?: Baseball is the first installment in a three-book sports series where I shine some light on a few of the unheralded but extremely important pivotal players, plays, records, sensational stories, radical records, colossal comebacks, and of course unbelievable stats. I’m a big research and history buff, so it was a lot of fun being able to tie in a lot of social and cultural information as it relates to baseball’s place in helping to shape American culture. For the kid that eats, sleeps, and breathes baseball or the kid that’s always ready with a mountain of hard to find sports facts to impress their friends, Who Got Game?: Baseball was most definitely written just for you. Batter up!

The Father of the Negro Leagues, Rube Foster

There was a time when official team baseball was considered a game for White men only. But that didn’t stop women and people of color from picking up a bat and taking a swing. In fact, in the 1860s, around the time of the Civil War, a number of all-Black baseball teams popped up throughout the country. Teams like the Philadelphia Pythians, the Bachelor Base Ball Club of Albany, and the Brooklyn Unique played against each other in an unofficial way. Over the next twenty years, there were more than 200 Black ball clubs all over the country, traveling from town to town to play one another. But there was no organized league, no way to tell who was the best of the best—or at least the best in a region. An incredible visionary—and pretty amazing pitcher—named ANDREW “RUBE” FOSTER wanted to change that. Thanks to his undeniable talent and unrelenting drive, he is now known as the father of the Negro Leagues. 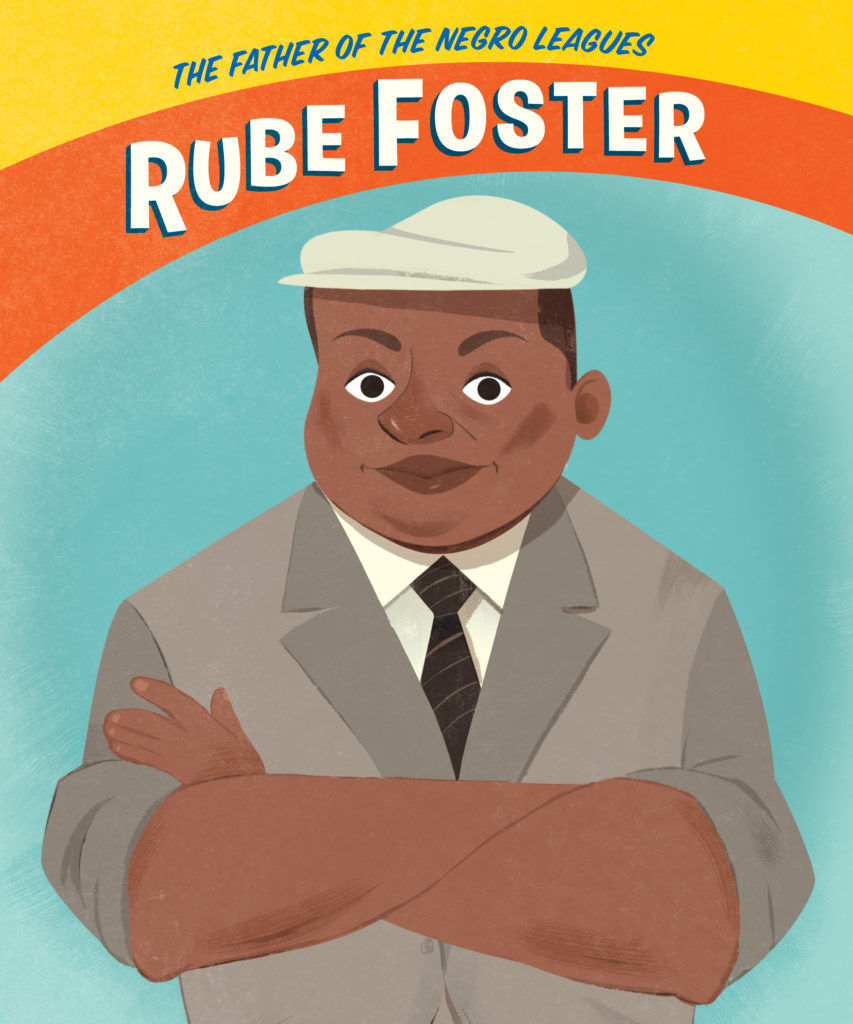 The legend of Rube Foster, the pride of Calvert, Texas, began in 1897 when he joined an all-Black team called the Waco Yellow Jackets at the age of seventeen. Tall and powerful, he quickly

became known for his blazing fastball and his wicked screwball.

When major league teams came to Texas for spring training, Rube would practice with the White players. He impressed the teams with his talent. They impressed him with how organized and professional they were.

At the time, Black teams were a little all over the place. Some had unusually short seasons. Others folded because of financial issues. And players were always jumping from one team to the next. Rube himself played for three different teams during the 1902 season: the Giants in Chicago, a semi-pro White team in Michigan called the Independents, and the Cuban X-Giants. None of this team-hopping slowed Rube down—he ended the season with a 44–0 winning streak.

For the next three years, Rube threw fire. But being on the field wasn’t enough for Rube—he wanted a piece of the behind-the-scenes action, too. He went back to Chicago, and in 1907 became player-manager of his old team, now called the Leland Giants. Three years later, he left the Leland Giants and started his own team, the Chicago American Giants, made up of players from the Leland Giants and the Philadelphia Giants (giants were apparently very popular back then). Over the next few years, he grew his team into a powerhouse, even securing a home field—a ballpark once owned by the Chicago White Sox.

In 1920, at a Kansas City YMCA, Rube arranged a meeting with seven owners of other all-Black teams from the Midwest. Together they formed the first Black baseball league: the Negro National League (NNL), with Rube as president and treasurer. The league consisted of eight teams: the American Giants (Chicago), Chicago Giants, Dayton Marcos, Detroit Stars, Indianapolis ABCs, Kansas City Monarchs, St. Louis Giants, and Cuban Stars. Some NNL teams drew larger crowds than the White major league teams, inspiring Black teams in other parts of the country to form their own leagues. Rube worked hard to maintain the NNL until he became ill in the late 1920s. The league continued after his death in 1930, but was never quite the same. 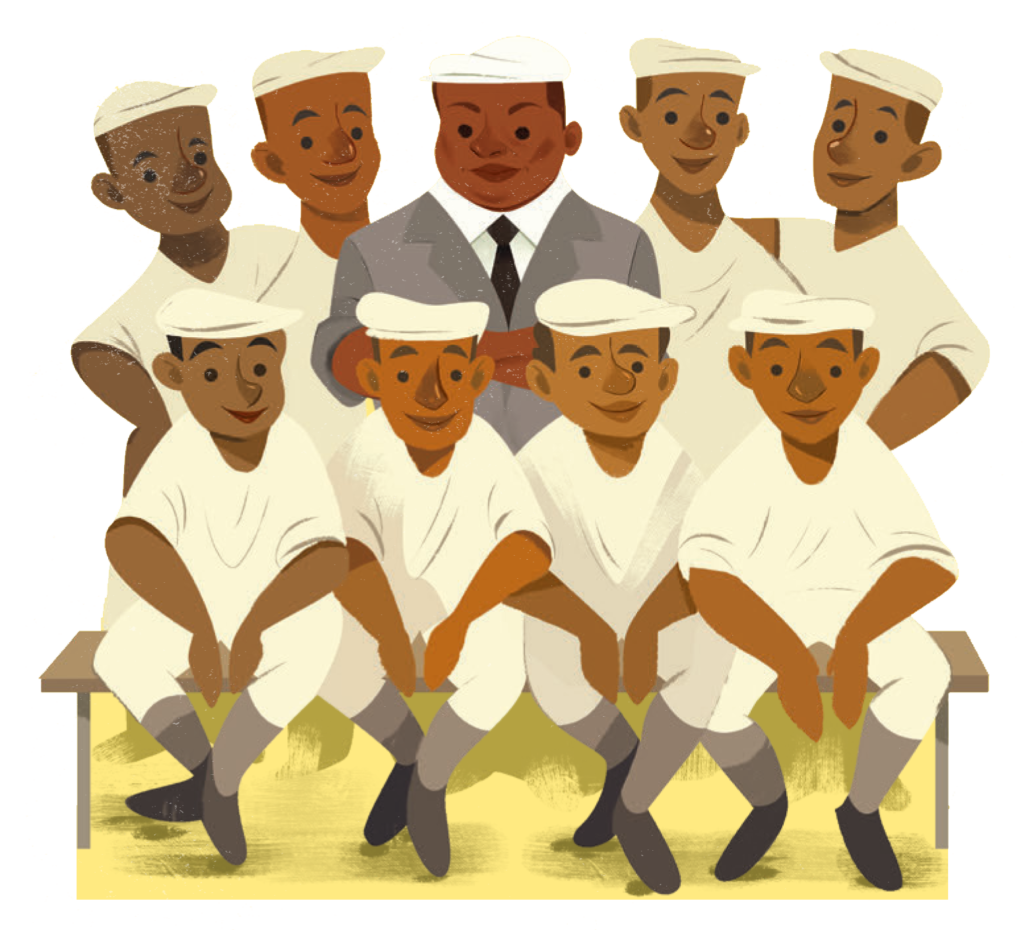 Currently, thirty-five players from the Negro Leagues have been inducted into the Baseball Hall of Fame, including Rube Foster. 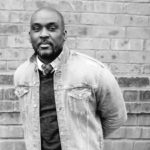 Derrick Barnes is the winner of the 2018 Ezra Jack Keats Book Award for outstanding new writer, and his picture book Crown: An Ode to the Fresh Cut took home four honors at the 2018 American Library Association’s Youth Media Awards: the Coretta Scott King Author Honor and Illustrator Honor, the Newbery Honor, and the Caldecott Honor. Derrick is also the author of the New York Times bestselling picture book The King of Kindergarten and the bestselling chapter book series Ruby and the Booker Boys. Derrick lives in Charlotte, North Carolina, with his wife, Dr. Tinka Barnes, and their four sons, all of whom play sports. Visit Derrick Barnes at derrickdbarnes.com and on Instagram and Twitter.

John John Bajet is a California-based visual development artist working in animation and picture books. He has worked as a color stylist in animation for The Tom and Jerry Show and is the illustrator of If We Could Do What Animals Do.