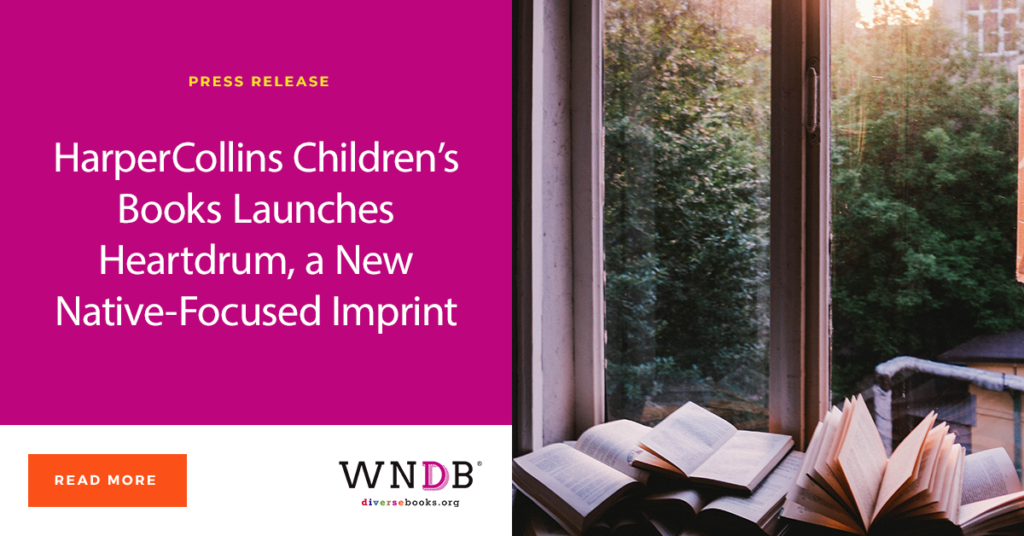 Launching in Winter 2021, Heartdrum will offer a wide range of innovative, unexpected, and heartfelt stories by Native creators, informed and inspired by lived experience, with an emphasis on the present and future of Indian Country and on the strength of young Native heroes.

“I’m deeply honored to be working with legendary editor Rosemary Brosnan to further connect my brilliant, creative community with the most important audience—young readers,” says Smith. “Now is the time for positive, heartening change in the form of resonant representation across all age markets and formats. We have life-affirming, page-turning stories to share.”

Brosnan adds, “I am excited to be partnering with Cynthia Leitich Smith on this groundbreaking initiative. Cynthia is deeply knowledgeable about books for children and teens, and about books by Native authors, and I’m delighted that she will lend her expertise to our new venture. There is a dearth of books for children and teens by Native authors, and we will work together to build a strong list.”

Heartdrum will fully center around intertribal voices and visions and will welcome all young readers.

The launch list will include ANCESTOR APPROVED, an anthology of stories that take place at an intertribal powwow in Ann Arbor, Michigan, edited by Cynthia Leitich Smith, and THE SEA IN WINTER by Christine Day (Upper Skagit). Future projects include novels by Brian Young (Navajo) and Cynthia Leitich Smith (Muscogee Creek), as well as a chapter book series by Dawn Quigley (Ojibwe).

“HarperCollins is dedicated to publishing books with a wide breadth of representation so that all children see themselves in the books they read,” says Suzanne Murphy, President and Publisher, HarperCollins Children’s Books. “Drawing on the expertise of Cynthia Leitich Smith, Heartdrum will publish debut and established authors across all genres for children and teens that reflect the diversity of Native people.”

Honoring the people of the diverse Native Nations, the Heartdrum name and logo pay tribute to the connection between the drumbeat at powwows and the heartbeat it evokes of the Native community.

Logo artist Nasugraq Rainey Hopson (Inupiaq) says, “The Native American population is beautifully diverse, and I wanted to capture the elements that we had in common and that unite us all: our connection with nature and our path towards balance and unity.”

As part of the imprint’s mission, Heartdrum will make an annual donation to the We Need Diverse Books Native Fund, to be used for writing workshops. “WNDB is excited to partner with Cynthia and HarperCollins Children’s Books to host a series of workshops designed to support and celebrate Native creatives,” stated Ellen Oh, Chief Executive Officer of WNDB.  “Heartdrum is a much-needed addition to children’s publishing.”

In 2014, We Need Diverse Books (WNDB) began as a simple hashtag on Twitter. The social media campaign soon grew into a 501(c)(3) nonprofit with a team that spans the globe. WNDB is supported by a network of writers, illustrators, agents, editors, teachers, librarians, and book lovers all united under the same goal—to create a world where every child can see themselves in the pages of a book.

About Cynthia Leitich Smith. Cynthia Leitich Smith (Muscogee Creek) is a New York Times bestselling author of fifteen award-winning and highly acclaimed books for young readers. Her debut picture book, Jingle Dancer, is widely considered a modern classic and a groundbreaking title of contemporary Native children’s literature. In addition, she was named a Writer of the Year by Wordcraft Circle of Native Writers and Storytellers for her debut novel, Rain Is Not My Indian Name. In addition to her realistic and fantastical picture books and children’s and YA novels, Cynthia is extensively published in the short story genre and also writes poetry and narrative nonfiction essays. Her Cynsations blog is among the most popular and respected in the children’s book industry. She serves on the core faculty of the Vermont College of Fine Arts MFA program in Writing for Children and Young Adults and on the International Advisory Board of the Society of Children’s Book Writers and Illustrators. Cynthia makes her home in Austin, Texas.

Previous Post: « Come Visit We Need Diverse Books at NCTE
Next Post: It Matters That My YA Novel Has a Visibly Disabled Character on the Cover »
The #BooksSaveLives auction is now OPEN! Thanks to