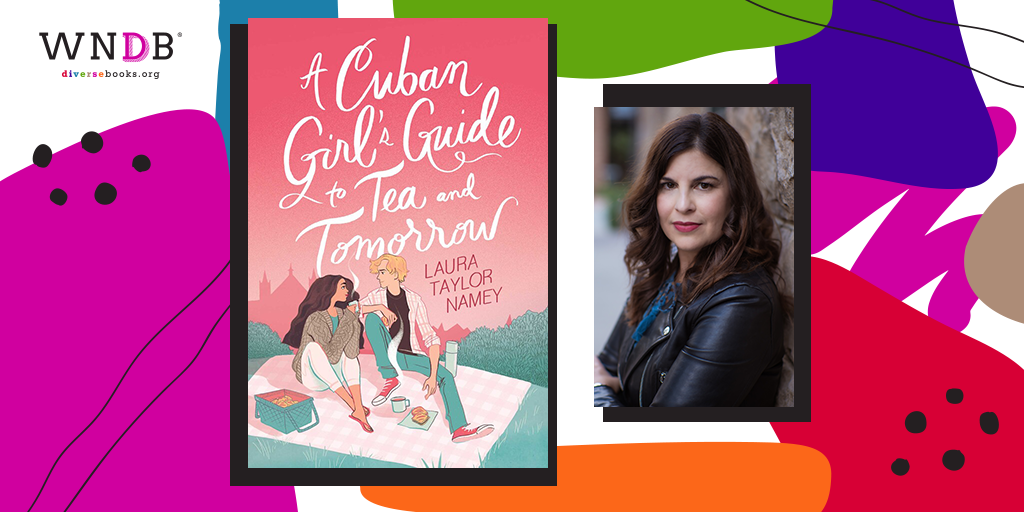 Laura Taylor Namey describes herself as someone who was always a writer, if not an author. She was a teacher before transitioning to full-time writing, and though she says she was good at the job, it didn’t bring her joy the way writing does.

“I’m obsessed with writing,” she told We Need Diverse Books. “There’s no other job I like. I’ve tried a lot. I have to write. I think for me writing is exploring emotion, it’s putting experience, emotion, history, memory, life, into a tapestry and into something that you can keep and the idea of that really appeals to me. I write to save things. I write because I have things to say about my past; I write because I have things to say that I want my children and their friends to read.”

Namey is the author of 2019’s The Library of Lost Things as well as the October 10 (and Reese Witherspoon’s Book Club YA selection for November) release A Cuban Girl’s Guide to Tea and Tomorrow. It’s the story of Lila Reyes, a protagonist who is Miami from the soles of her feet to the top of her head, being sent to England for the summer to deal with grief and a deteriorating mental state.

Namey’s latest book is filled with explorations of mental health, food (oh so much food, as Lila is a chef and yes, her culinary escapades are present throughout the book), absolutely delectable descriptions of all things British, and a blooming romance.

“[This book] really is my heart,” Namey said. “I really had the time of my life drafting this book.” Her favorite parts included writing the food as well as “writing Lila and Orion, just their relationship. It was hard cause there was such an arc there, it was a finely spun thing like a Jenga tower, but writing them, there was so much fun for me. These little star kids.”

At the same time, there were parts of writing this book that were intensely difficult for Namey. On the craft side, she spent revisions changing the book from a multiple-timeline tale to the one present today. “That was hard, to find the story within the story,” she said.

But Namey confessed that this book is also very personal to her: While she was writing it, her Tia passed away. Namey’s Tia inspired Lila’s grandmother, who’s a force in Lila’s life despite having died before the beginning of the book.

“I was not okay,” Namey said. “I dug up so much and didn’t know what to do with all this residual emotion. Then I had to come back to earth, really get back into self-care. Now I look back and I’m glad for the pain because I think it made something pretty—this came from a place of hurt, and I was able to put that in the book, and maybe I can look at it as a gift now. Maybe.”

At the same time, although the book does deal heavily with the grief of losing a loved one, Namey is hopeful that it’s the type of book which can give readers an escape, if only for a few hours of blissful reading.

“It’s just really a great time to give the world this book. It’s my heart and I’m trying to expand the heart of the world that’s suffering,” she said. “We need hope and love and tea and sweaters and anything happy—anything to feel our feels and have a place for that.”

Another very personal part of the story is the utter Cubanness of it, Namey indicated. “It’s right out of my own family,” she said, explaining that her mother, one of 10 children, came to America as an exchange student from Cuba and never returned.

Though Lila hails from Miami, Namey herself grew up in California but said she and her immediate family visited their extended family often in Florida.

“Going there, I would become more Cuban almost,” she said. “I lived a different kind of upbringing in California even though it’s quite diverse here. Going there, to Miami, I felt like, ‘Wow I’m part of this, but I’m half white, I’m also so Americanized, that I live between these two worlds. I loved being with my Cuban family just, seeing the food…There is such talented, resourceful, brilliant people that I come from.”

Even though the book is set in England, away from Lila’s Cuban family and the heat of Miami, those are never far from her thoughts, and they infuse nearly every page. Namey said she pulled many aspects of the book from her own life and family, including saying almost everyone in her family made it into the book in some capacity or another. 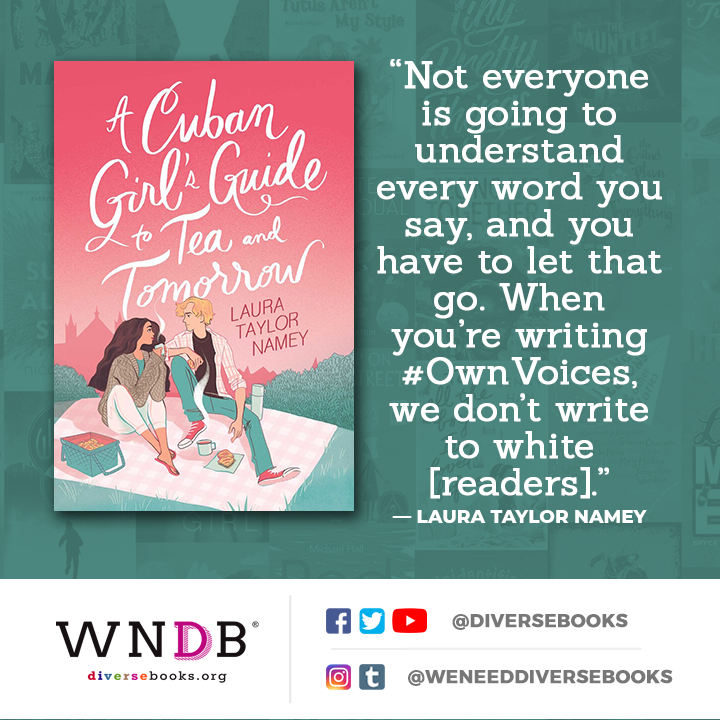 “The book is kind of what I saw, ate, listened to, danced to, heard behind walls just growing up from childhood to adulthood with these people shepherding me,” Namey said. “Picture My Big Fat Greek Wedding, Cuban style, that’s what my family is like.”

One part of the book that Namey felt passionate about was almost answering the question of why Lila was sent away. She shared that two of her own cousins lived with her family in California for a period while she was growing up—similar to how Lila is sent to stay with family across an ocean.

“I wanted to say this happens and it’s okay and it’s a showing of love in a different way, and it’s so cultural,” she explained. “Not everyone is going to understand every word you say, and you have to let that go. When you’re writing #OwnVoices, we don’t write to white [readers]. But we write with a measure of universality so that we are understood and appreciated and respected.”

She explained that there are moments when she would get feedback that certain cultural elements weren’t as “clear,” so she would add more to explain the motivations—but she wouldn’t change the integral act.

Speaking of books, Namey recommended a few she’d read recently and was a fan of, including Furia by Yamile Saied Mendez, which was selected as the September YA pick for Reese Witherspoon’s book club.

In addition, she said she loved Somewhere Between Bitter and Sweet by Laekan Zea Kemp, saying, “It’s another YA foodie book,” as well as Efren Divided by Ernesto Cisneros, a book about immigration and ICE.

Finally, Namey described perfectly the vibes she hopes her book gives, saying: “I would love to add a book that makes people feel the way Folklore makes people feel—the feeling of wanting to provide a little escape place for a time. Give people some joy.”

A Cuban Girl’s Guide to Tea and Tomorrow by Laura Taylor Namey is on sale now. Order it here!

For Lila Reyes, a summer in England was never part of the plan. The plan was 1) take over her abuela’s role as head baker at their panadería, 2) move in with her best friend after graduation, and 3) live happily ever after with her boyfriend. But then the Trifecta happened, and everything—including Lila herself—fell apart.

Worried about Lila’s mental health, her parents make a new plan for her: Spend three months with family friends in Winchester, England, to relax and reset. But with the lack of sun, a grumpy inn cook, and a small town lacking Miami flavor (both in food and otherwise), what would be a dream trip for some feels more like a nightmare to Lila…until she meets Orion Maxwell.

A teashop clerk with troubles of his own, Orion is determined to help Lila out of her funk, and appoints himself as her personal tour guide. From Winchester’s drama-filled music scene to the sweeping English countryside, it isn’t long before Lila is not only charmed by Orion, but England itself. Soon a new future is beginning to form in Lila’s mind—one that would mean leaving everything she ever planned behind.

Previous Post: « Sanctuary Is a Near Future Call-To-Action About Immigration
Next Post: Q&A With Jas Perry, Literary Agent »
Applications are open for Literary Agents of Chang