Toward the end of 2020, I realized that I’d read basically zero books. Understandable, of course. It was a difficult year, one that didn’t magically improve when the clock struck midnight on New Year’s Day. So in a last-ditch, guilt-fueled (and vain) attempt to bump up my numbers, I reread books from my childhood. They’re short, familiar, light-hearted—exactly what my fickle Gemini brain needed. I’d expected a pleasant stroll down memory lane, perhaps with a chortle or two. What I got, however, was an emotional rollercoaster, and a much-needed opportunity to reframe my childhood trauma.

Twelve-year-old Rebecca was absolutely obsessed with Masashi Kishimoto’s Naruto. I had keychains. I had tie-in books. I’d sneak out and buy the latest Taiwanese version of Shonen Jump. There’s probably still a mountain of notebooks in my childhood bedroom, all filled with fanfiction.

I had a decent time revisiting the franchise at first, but a sense of unease soon began to creep up on me. The problematic elements I’d missed as a kid bugged me, for sure. It’s never pleasant to take off those rose-tinted nostalgia glasses. But I’d expected that. I’d grown, and so had my critical-thinking skills. No, what bothered me was that my manga obsession coincided with the worst years of my life. A series that brought young Rebecca so much joy was also sullied by memories of immense trauma.

Not wanting to push myself, yet desperate to know how the story ended, I decided to just read the Naruto Wikipedia page. It’s an odd feeling to know how Naruto ends, when thirteen-year-old me fully didn’t expect to live to see the conclusion of the series. As morbid as the reread had become, I was actually doing pretty well. Thanks to therapy, I had the tools to work through the surge of unpleasant memories.

All hell broke loose when I moved onto preschool books. I flipped through picture books, not really paying attention. After all, my goal was to finish my reading challenge for the year. Several holographic fish and inexplicably red dogs later, I finally got to my favorite: Brown Bear, Brown Bear, What Do You See?

The classic picture book by Bill Martin Jr. and Eric Carle was hands-down my favorite in preschool. It had pictures, it had rhymes, and most importantly, it was singable. I used to prance around the local library, dancing and singing along to the tune of “Twinkle Twinkle Little Star.” Fast forward twenty years, and I found myself staring at the red bird on page two, thinking, “What happened?”

“Life happened,” was my first response, but that would be inaccurate. Life had already been happening in that tiny New Jersey library. What made my heart seize was the reminder of a pre-trauma life, or perhaps more precisely, a life before I realized that multiple adults had failed me. Rereading Brown Bear felt like I’d somehow tainted that pre-trauma existence.

The most bittersweet part of all was the recognition that I had had a childhood at all.

I used to tell myself often that I didn’t have much of a childhood. But in truth, it was simply easier to pretend I didn’t have one at all than to admit that my bleak childhood is the only one I get. That is my immutable reality. A childhood like loose-leaf paper, riddled with little tears in the holes, ignored because they were on the edges of the page. Little tears that you ignore until the pages can no longer hang onto the binder rings, and everything falls apart.

But in my attempt to honor my trauma and remind myself it was real, I’d overshot and minimized the little moments of joy that kept me going.

I want to say that rereading childhood books allowed me to be the child I never was, but that would be inaccurate. I can be silly. I can jam to “Old McDonald” and Hakka folk songs with comical enthusiasm. The fact of the matter is that I will never be a child again. But I also don’t want to erase the way little me grasped at all those small moments of joy. It was those moments, the Brown Bears and the Narutos that made such a childhood bearable. Happy, even, at times. They allowed me to be a child when those around me were determined to whittle me down.

I want to honor the way Rebecca—in preschool, in her teens, and now in her twenties—led different lives through all these books and learned that she deserved better than the cards she’d been dealt. Baby Becky read all about medieval Europe during her Tamora Pierce phase. She collected joke books with the cheesiest puns. She chronicled moments of despair, yet also took the time to capture joy by writing fanfic in which her self-insert “knew all the jutsus.” She imagined and read and wrote a better future for herself. And Right-Now Rebecca is proud to report that, despite some major plot changes and a marked lack of ninjas, the future Baby Becky imagined for herself is pretty damn good. 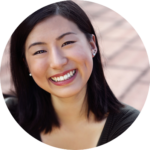