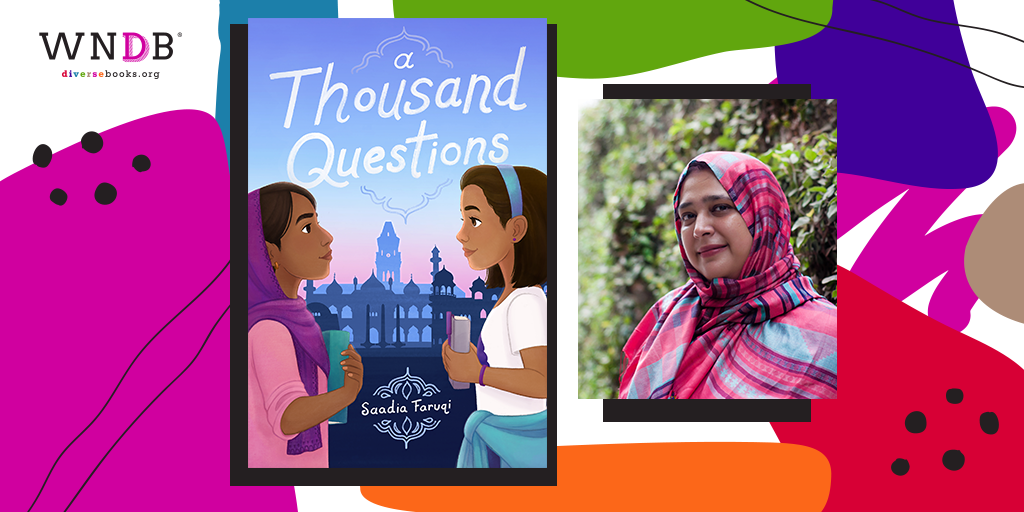 For more information on voting and political activism, visit our Fall Book Club and our resource guide.

Elections can be stressful, as we’re all learning these days. Choosing candidates that seem flawed and unlikeable; deciding to take time out from an already busy schedule to stand in a long line to vote; everything about an election is difficult. Add to that a global pandemic, and this is really not anyone’s favorite time of year.

As a Pakistani American, elections are often on my mind. I grew up in Pakistan during the dictatorship of Zia-ul-Haq, and I remember the lack of freedoms we had. It was real and raw, even for a child like me. I can’t imagine what my parents must have felt and how they managed. I witnessed the first elections of my lifetime when I was in middle school, the joy of voting on the faces all my adult family members, my teachers, my neighbors. It was thrilling.

And then the bad news slowly filtered through as I got older. A national election sometimes doesn’t change lives. In fact, many things don’t change at all when we elect a leader of our country. No matter how much we look forward to a change in administration, we still struggle with many of the same issues as before. A national election is a big-picture event, and we’re more interested in the little picture. In ourselves.

I wrote about elections in my new middle-grade novel A Thousand Questions (Quill Tree Books, October 6 in the US and November 12 in the UK). Mimi, one of the main characters, is an American girl who’s visiting her grandparents for the first time in Pakistan during a national election campaign. Pakistanis are getting ready to elect a new Prime Minister, and the atmosphere is full of anticipation. Rallies and car parades with blaring music and chanting slogans. Posters on every wall, and signs in every yard. Candidates making bombastic speeches, promising the world to those who vote for them.

Sakina, the other main character, isn’t fooled by these promises. She’s a poor girl who works as the cook’s assistant in Mimi’s grandparents’ house. She knows that her life will remain the same regardless of who the Prime Minister is. She can see the poverty in her neighborhood, and the way the elected officials only make empty promises year after year, decade after decade.

The American Mimi is over-awed by Sakina and her real-world experience. Kids in America don’t care about elections the same way. They’re too young to vote, and hence, too young to care perhaps.

A parade of vans with flags and music blaring from the rooftops whizzes by. “Election rallies,” Sakina explains with a dismissive hand. “They think music and noise will make us vote for them.”

I stare at the vans disappearing in the distance in clouds of smoke, remembering the midnight music-fest from the week before. “Who are they?”

“Who cares? All the political parties have similar rallies. They beg and plead for our votes, but none of them actually want to get anything done.”

I look at her. She’s got this hard look on her face that makes her seem older than both of our ages combined. Her life is so different from mine, I suddenly think. She actually works for a living, contributes to her family, has an opinion about grown-up things. I, on the other hand, just exist. If I dropped dead tomorrow nobody would miss me.

Well, Mom would miss me, but that’s not what I mean. 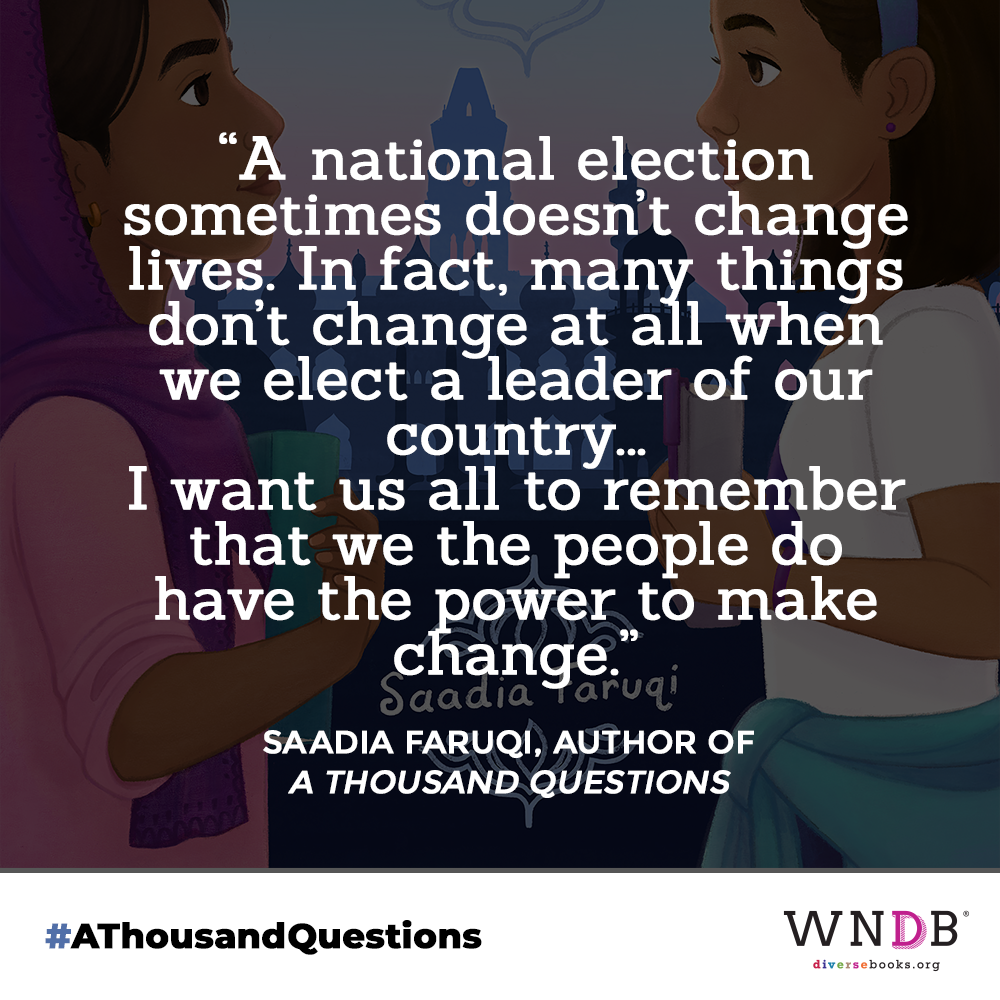 A Thousand Questions is a friendship story. A story about two girls worlds apart in terms of their cultures and experiences. The election is just a backdrop, but because of it, Mimi and Sakina have conversations about corruption and nepotism, about democracy and what it really means on an individual level. How a country can be free, but not its people.

Sakina sighs. “I’ll be so happy when this election is over.”

Nani nods and utters a tired “mm-hmm.” Then she adds, “You know, Sakina, when I was younger, we didn’t have any elections at all. Pakistan has been ruled by several dictators over the years.”

“That sounds lovely,” Sakina mutters. “The no elections part, I mean.”

I have to protest. “Come on, who’d want to be ruled by a dictator? Don’t you want your freedom?”

Sakina gives me a hard look. “There’s no freedom for poor people,” she says, then looks at Nani and bites her lip.

Nani nods. “It’s okay, dear. I know what you mean. Money gives you freedom in some ways, but to be truly free you need other things. Good friends. Family. Your children around you. You’ll learn this as you grow older.”

This year, as we go into national elections one more time, many children in our lives may be feeling as Mimi and Sakina do: That it doesn’t really matter. Books like A Thousand Questions help provide some answers, but it’s also imperative for the adults in the room to talk about what democracy means and how we benefit from it every day in our lives. How local elections are important because it’s the level that affects us personally and individually.

And why, no matter who wins the elections, we can still make a difference in our own lives and communities in a lot of ways. Sitting on local school and library boards, volunteering for our favorite charity, participating in town halls and city council meetings to ensure our opinions are heard. We can do all this right now, and tomorrow, and every year. We can do this regardless of who the president is. And we can bring our kids with us, to show them by example how the little-picture works.

I want us all to remember that we the people do have the power to make change. It may not be on a national level, but in our neighborhoods and among our friends, we can ensure this. Sakina is determined to make things better for her family and her neighborhood. Mimi realizes that even though she’s just a kid, she can change people’s minds through her words and actions. And I hope readers realize their own power, no matter how old they are.

A Thousand Questions by Saadia Faruqi is out now. Order it here! 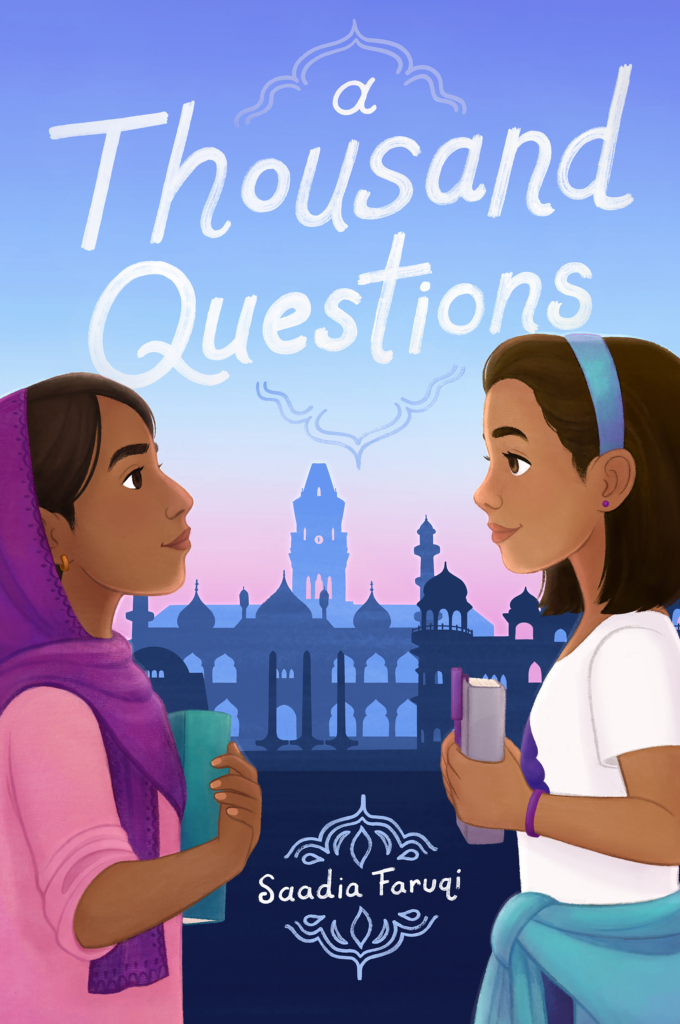 Set against the backdrop of Karachi, Pakistan, Saadia Faruqi’s tender and honest middle grade novel tells the story of two girls navigating a summer of change and family upheaval with kind hearts, big dreams, and all the right questions.

Mimi is not thrilled to be spending her summer in Karachi, Pakistan, with grandparents she’s never met. Secretly, she wishes to find her long-absent father, and plans to write to him in her beautiful new journal.

The cook’s daughter, Sakina, still hasn’t told her parents that she’ll be accepted to school only if she can improve her English test score—but then, how could her family possibly afford to lose the money she earns working with her Abba in a rich family’s kitchen?

Although the girls seem totally incompatible at first, as the summer goes on, Sakina and Mimi realize that they have plenty in common—and that they each need the other to get what they want most. 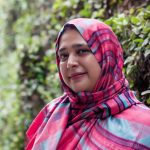 Saadia Faruqi is a Pakistani American author and interfaith activist. She writes the popular early reader series YASMIN and other books for kids and adults. Her middle-grade novels include A Place at the Table (co-written with Laura Shovan) and A Thousand Questions. She lives in Houston, Texas with her family. Follow her on Instagram and Twitter @saadiafaruqi.

Previous Post: « People With Chronic Illness Are Missing From YA Fiction
Next Post: Q&A With Darcie Little Badger, Elatsoe »
Applications are open for Literary Agents of Chang