Like a lot of us growing up in the 90s, I read what few YA books I could find shelved among the Baby-Sitters Club and Judy Blume novels. I read everything that Christopher Pike wrote, all of the books by Lurlene McDaniel, and one of my favorites, L.J. Smith. The covers for these books, even across themes, all sort of had a familiar feel.

White teenagers staring out from the covers, all mostly tall, thin, beautiful in the standard ways. If the book was horror or a thriller, they would have a look of fear in their eyes. For Lurlene McDaniel’s books, they mostly stared out, looking wistfully or forlornly at the outside.

But they are almost all abled.

When we were working on the cover for BRAVE ENOUGH in 2017, my only real request was that if there was an actual person on the cover that the model would also be an actual amputee. I didn’t want them to use Photoshop to later edit the leg of a ballerina out. My team at Flux absolutely agreed, but in the end, we went with the silhouetted profile of my ballerina.

For FINDING BALANCE, I asked that we please feature Mari on the cover. And Mari is an amputee who doesn’t use a prosthesis. She has forearm clip crutches, isn’t super slim, and is missing her entire leg. The story is once again about two characters, both finding their way in life after cancer, but it was Mari that I wanted on the cover.

And I wanted Mari on the cover because I had never seen an amputee on the cover on a book before. I’ve been an amputee, just like Mari, for most of my life. I don’t remember much of life before I had one leg, but I can say for certain, that if I’d seen a cover with a girl who looked like me I would have needed it.

When I talked to Mari Kesselring, my editor at Flux (coincidence that she shares the same first name as my protagonist) about this, she agreed whole-heartedly. Mari understood why it was important and understood the significance of this to me. She had two mock-up covers done, but it was the one with the amputee on the cover that we all loved. 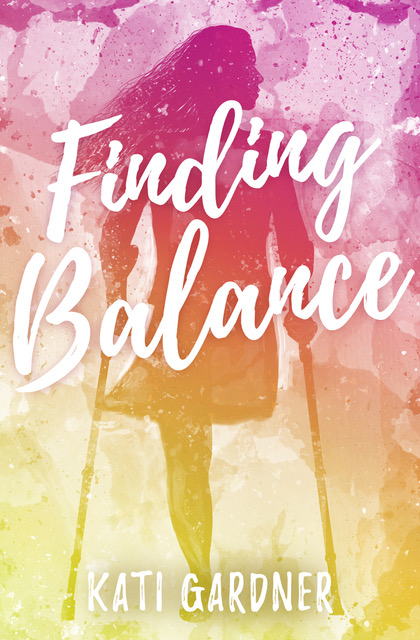 The day I got my first mock-up of the cover, I had just finished running errands. I was sitting in my car, delaying the work I needed to do inside my house by checking my email. And there it was, a gorgeous cover with a young woman with an amputation. I remember the way my throat closed a little, because not only was it Mari on the cover. It was me. It was every young woman with an amputation.

Visual representation of people with disabilities has been something that is still lacking in mainstream media. When abled people only see disabled people in Facebook videos where we’re doing the unstoppable, also known as inspiration porn, it only tells one story. When we aren’t represented accurately or actively in pop culture it leads people to believe that we are either all dying, literally, or Paralympians. We can’t be multifaceted people who are living lives, taking tests, dating, being flawed. Disabled people are people. Humans. And like every other person, we want to see stories about us that are truthful and compelling and not all about death or winning medals.

I wanted Mari to be strong on this cover, to be a force. Because she is a force. She is strong and gifted and finds herself caught between two different worlds, the world where everyone is healthy and only knows of cancer through books and TV, and the world she lives in which is what real childhood cancer survivors know. The one that says, our hair may have grown back, but there’s still a lot going on.

And I wanted a disabled girl on the cover that said my life isn’t over. That wasn’t staring out looking for her lost leg or lost health. One that said, I’m still here.

Finding Balance by Kati Gardner is now available on NetGalley.

Kati Gardner is the author of BRAVE ENOUGH and FINDING BALANCE. She is also a recovering actor who has spent the last few years keeping tiny humans alive. In high school, she was determined to play a doctor on General Hospital and possibly add in a love story with Jonathan Jackson. She would spend hours toiling away on fanfiction for the AOL community and dreaming of the day she would accept a Daytime Emmy Award. In college, she majored in theater arts and spent lots of time hanging out in the box office. Before any of that happened though, Kati had cancer. She was eight. She responded to chemotherapy and had an amputation of her entire left leg. She still advocates for childhood cancer research and accessibility for all individuals with disabilities. Kati is married, has two great girls, and a posse of furry friends. She doesn’t watch General Hospital anymore but still thinks that Lucky Spencer is one of the most dynamic characters ever written.

Previous Post: « HarperCollins Children’s Books Launches Heartdrum, a New Native-Focused Imprint
Next Post: Why Should You Apply for a We Need Diverse Books Internship Grant? »
Happy pub week to LOVEBOAT REUNION by @abigailhing