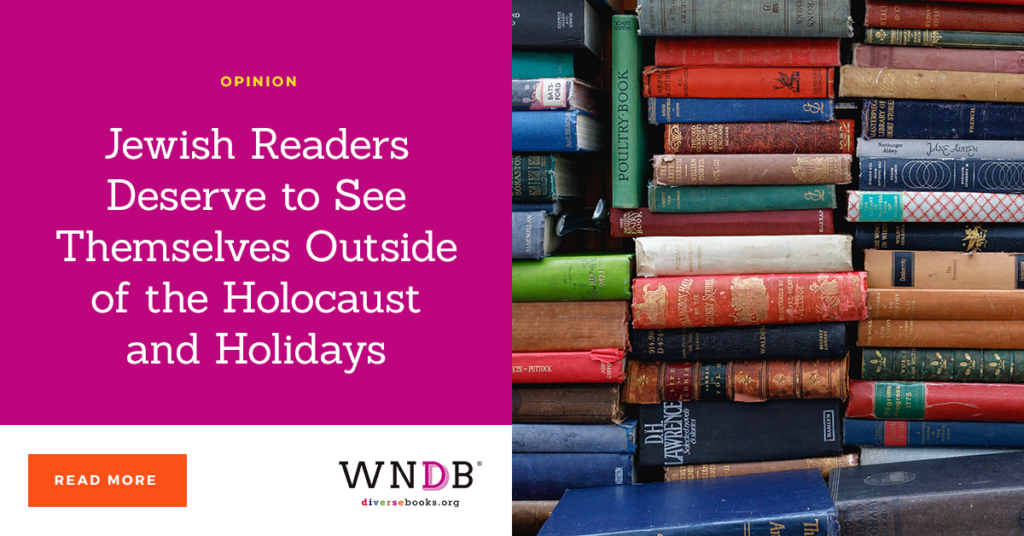 “HERSHEL OF OSTROPOL!” my mother read to me in a deep, rasping voice.

“Did I hear something?”

Her voice had changed pitch and tone, lighter, higher, with a little quiver in it indicating fear—Hershel’s voice.

“IT IS I, THE KING OF THE GOBLINS!” she boomed again.

This is one of my earliest childhood memories: my mother reading the classic Chanukah picture book, Hershel and the Hanukkah Goblins by Eric Kimmel. Trina Schart Hyman won a Caldecott Honor for her illustrations.

My mother had different voices for every character, from the squeakiest voice for the littlest goblin on the first night of Chanukah to the classic New York Jew accent for the rabbi’s few lines. The Chanukah Guest (also by Eric A. Kimmel, illustrated by Ciora Carmi); Latkes and Applesauce: A Hanukkah Story by Fran Manushkin, illustrated by Robin Spowart; and an old book of collected Jewish folktales—the kind of book with yellowed pages, spot illustration line drawings, and a simple blue hardcover—were the only books with Jewish characters I remember being in the house during my childhood. While I loved the closeness I felt when cuddled up with my siblings listening to these seasonal tales read by my mother, and enjoyed the philosophical discussions with my father about the lessons imparted by the fables, the only other times I heard Jewish stories at home were in Bible stories and history lessons read during other Jewish holidays such as Passover and Purim.

Letters from Rifka. Number the Stars. The Upstairs Room. I devoured these books at school. They made me sick to my stomach and filled me with a morbid fascination. What personally would I have done during the Holocaust? What would I have had to endure? How quickly would I have died? I had nightmares. I still have nightmares.

In an effort to counter the sensationalized fiction, my mother gave me The Diary of Anne Frank. It was taken away from me by my teacher, and my mother was called into the principal’s office. Did she know what her daughter was reading? they asked her.

“Yes,” my mother responded, incredulous, furious. “I gave it to her.”I started to keep a diary around that time. Later, I would earn my MFA in Writing Literature for Children. I can not overstate the impact journaling like Anne had on my emotional development, giving me an outlet to pour out those tender young feelings while exploring the written word. In high school, I sobbed for weeks—at home, at school—while reading Eli Wiesel’s Night, Dawn, and Day trilogy. We had been assigned it in class. For the first time ever, I couldn’t participate in class discussions; I couldn’t speak past the pain. But I kept writing, catching my breath between sobs at the way horrors were described in the most beautiful turn of phrase. I contrasted these with Chaim Potok’s dense yet seminal work The Chosen. Somehow a book about two boys, their relationships with their fathers, and their Orthodox and Hassidic religious practices failed to provide the comfort I was looking for, but it continued to showcase the richness of Jewish, self-descriptive language. It wasn’t until many years later that as an adult, I read a book that began to put a balm over the raw edges of Jewish representation I had internalized through the books of my childhood, even as they taught me how to be a writer

Kerry Greenwood’s Corinna Chapman series (Earthly Delights is the first book, and while intended for adults, is a great teenage crossover series for ages 15 and up) features a Rubenesque size 20 baker (three cheers for voluptuous woman representation!) who meets and has a ridiculously healthy and loving committed romantic relationship with an ex-Israeli soldier-turned-private detective named Daniel Cohen who is, in case you haven’t guessed it, very much Jewish.

There are gentle insertions of his ethnicity and religion throughout the series: He calls Corinna ketschele, which means “kitten” in Yiddish, and other similar endearments; while making a meal Corinna wonders if he eats bacon (he does); he explains some history about Israeli/Palestinian relations (he has a scar from a bullet wound); and a secondary Jewish character, Uncle Solly, the nice old man who runs a New York-style deli who most certainly is NOT a Mossad agent, is later introduced during a subplot. There was something so simple and yet profound about the way Daniel’s Israeli Jewishness was carried through his characterization and various plotlines that made the books feel immediately familiar, accessible, and more enjoyable to me as a reader. I devoured every book in the series. Twice.

This was one of the first examples I had ever encountered of a Jew, casually and yet profoundly Jewish, living happily as a Jew, outside of a Jewish community. It had taken me 30+ years to see even a portion of my own experience reflected in a book.

I did not have a Jewish community growing up, and I am still working on cultivating one as an adult. As a child, not only did I rarely meet another Jew outside of a family member, but my family actively experienced anti-Semitic rhetoric and actions. For a few brief teenage years, we were able to attend temple regularly. While this created a type of instant community for us that I had never experienced before or since, it also came with the experience of walking past armed guards, hired for our protection, when attending High Holidays (Rosh Hashanah and Yom Kippur) services. In attending a memorial service at a temple in 2018 to mourn the mass shooting at a Pittsburgh synagogue, I walked past armed guards again. Both in books, and in my own experience, being Jewish was something that was an undeniable part of a person’s identity–it is in our blood, passed down through our mothers–and yet when acknowledged, was consistently marked by othering, discrimination, and fear.

I fervently wish that as I was growing up, I had been exposed to books featuring Jewish people and characters that weren’t solely about Jewish holidays, the Holocaust, or both. In Earthly Delights, not only did I see fearless self-love in Daniel’s character, but I was also able to see casual acceptance and even appreciation of him as Jewish in Corinna’s role as his partner. I am lucky that in my own mixed-faith marriage, my wife accepts and supports my Jewish identity, joining me at events like the mourning ceremony in 2018. But I can only imagine how much earlier I would have come to not only self-acceptance of, but also pride in, my Jewish queer identity, had I seen this modeled in books during my childhood.

The musician Sean Altman has a Passover song called They Tried to Kill Us (We Survived, Let’s Eat!), which is pretty much the short version of most Jewish holidays. But while we make light of it, when the majority of the representation you see about your culture is your people once again escaping some type of organized persecution, it’s difficult to form a proud identity from that. This is why it is so crucial that we continue to write, publish, and highlight books featuring Jewish characters whose Jewishness is both an indelible part of their character and also not the primary purpose of the story. This is one of the goals I have with my own writing: To include Jewishness, queerness, immigration, and type 1 diabetes—experiences and identities that have greatly impacted my own life—in casual, positive, and even light-hearted ways in order to move beyond representing purely the struggles associated with these realities, and instead, encouraging normalization, acceptance, and celebration of them. Jews are so much more than their history of enslavement and persecution; we are so much more than our holidays. It is past time to see positive representations of Jewishness highlighted in books children can be proud of.

A suggested reading booklist of books featuring Jewish characters that are not about holidays or the Holocaust (primarily): 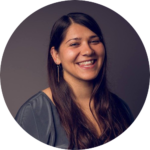 BrocheAroe Fabian (/bruh-kuh/ for short) is an Anthropologist, a writer, and a world traveler, who grew up abroad and in the US in a trilingual household. She is the proud owner of River Dog Book Co., an independent bookstore with a nontraditional model focused on highlighting diverse, global, inclusive, and representative books for all ages and a mission to foster cross-cultural communication and understanding via access to literature. She, her wife, and their two dogs call Portland, OR home.

Previous Post: « Shveta Thakrar’s Star Daughter Is About the Child of a Star and a Mortal
Next Post: Saadia Faruqi and Laura Shovan (A Place at the Table) in Conversation »
We've got new #BooksSaveLives swag in the WNDB Bon