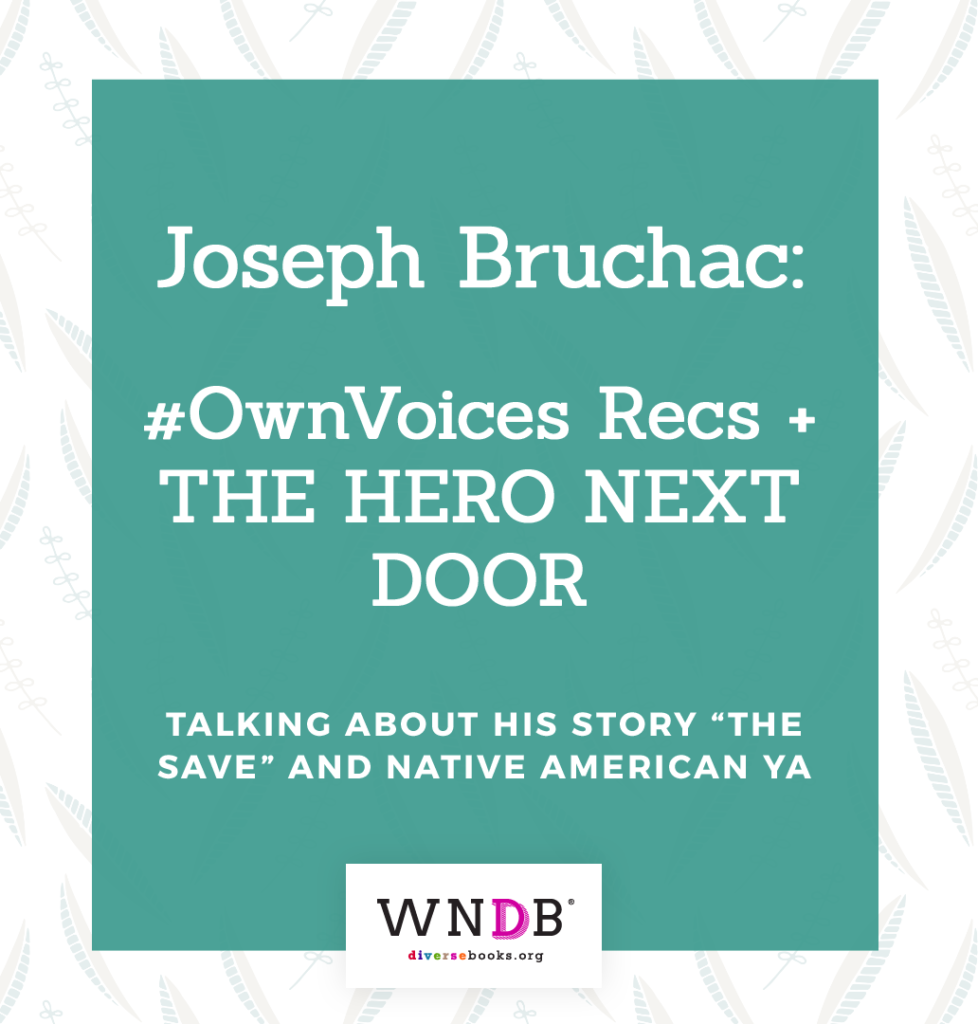 Joseph Bruchac talks about his short story in We Need Diverse Books’ upcoming middle-grade anthology, THE HERO NEXT DOOR! Additionally, Joe gives some recommendations for books to read by Native American authors.

Joe: I’m Joe Bruchac, writer and a storyteller, and I am included in this book, THE HERO NEXT DOOR, with my story “The Save.”

JoAnn: What was the inspiration for it, and did you actually play sports when you were a kid?

Joe: So I sort of thought, “Well, what have I wanted to tell a story about?” And that idea of a kid who’s not really sure of himself as a lacrosse player, who finds his own way, not necessarily in the game itself. It came to me and I just followed it through, saw where it went, and ended up with this story. I never played lacrosse —

Joe: — unfortunately, when I was in high school and college, I was a wrestler. I was not doing that — but I always had a great respect and love for the sport. When I made my main character and put their name, Oren, in the story, it was a little homage to Oren Lyons, who I have loved and respected for many decades.

But the idea that people play sports — sports is a Native American conception in terms of games that are team sports. Most European sports were individual contests, one against the other. But in our Native cultures, the idea was that we played together; we don’t just play to win.

But also, in a sense, a lacrosse game can be like a prayer. A way of making an offering to the Creator. Sometimes if someone is ill, you play a lacrosse game in honor of that person to bring them back to health.

So having a lacrosse game played, having it played by a Native American team who might legitimately call themselves the Warriors against a non-Native team on the reservation, bringing people into that unfamiliar setting, I think, is a very important thing to do in a story.

To acquaint people with a culture and a place they may not be familiar with, but is everyday to those who are part of it.

JoAnn: So, in terms of young adult or middle fiction, what would you recommend?

Joe: Well, I thought a lot about this and there are so many good writers in so many places doing so many things that I thought I would just limit myself to some Native American writers.

And I actually wrote them down, because if you don’t write things down, sometimes you forget it.

JoAnn: Yeah — oh yeah, that’s why I’ve got this. [holds up index card]

Joe: Cyn is a friend of mine and wonderful writer, her blog Cynsations is something we should all know about. Her newest book is called HEARTS UNBROKEN.

JoAnn: I love that book.

Joe: It’s cool! Because here you have a young man who wants to play a part in the Wizard of Oz but is Native American, and you also have a young woman who’s a newspaper reporter in her school, dealing with a very intolerant parents’ group.

Joe: It is a fascinating story and I really applaud her for writing that.

Gary Robinson, who’s Choctaw-Cherokee, and his newest one published this year is called STANDING STRONG, about a young woman, a Native woman who finds no purpose in her life. Then she finds out about the Water Protectors’ Movement, and finds purpose and place by standing strong for the environment.

Anthony Perry. Anthony is Chickasaw, has a young adult novel called CHULA THE FOX, it’s a historical novel about his own people. And what’s interesting to me about that is not only that I like the book, but it was published by White Dog Press, which is a division of Chickasaw Press, a Native publishing company now publishing YA fiction for the first time.

There are lots of other writers I could mention, but unfortunately there are so many. I think I’ll just cut it off here, because unlike 20 years ago when I couldn’t think of 20 writers, now I can think of 20 just in terms of Native American writers.

JoAnn: That’s what I love about the We Need Diverse Books movement, because we’ve helped contribute to lifting up those voices.

I just wanted to ask you a quick lightning round, if that’s okay?

JoAnn: Week to week or binge-watching?

Joe: I never write longhand; I can’t read my own longhand.

Joe: But I print — when I have a notebook with me, I’ll print it out and then I’ll transcribe it onto my computer later.

Thank you so much for talking with me today.

JoAnn: THE HERO NEXT DOOR will be out July 30th.

Music: “Nightingale” by Eveningland & “Down the Street Blues” by Unicorn Heads