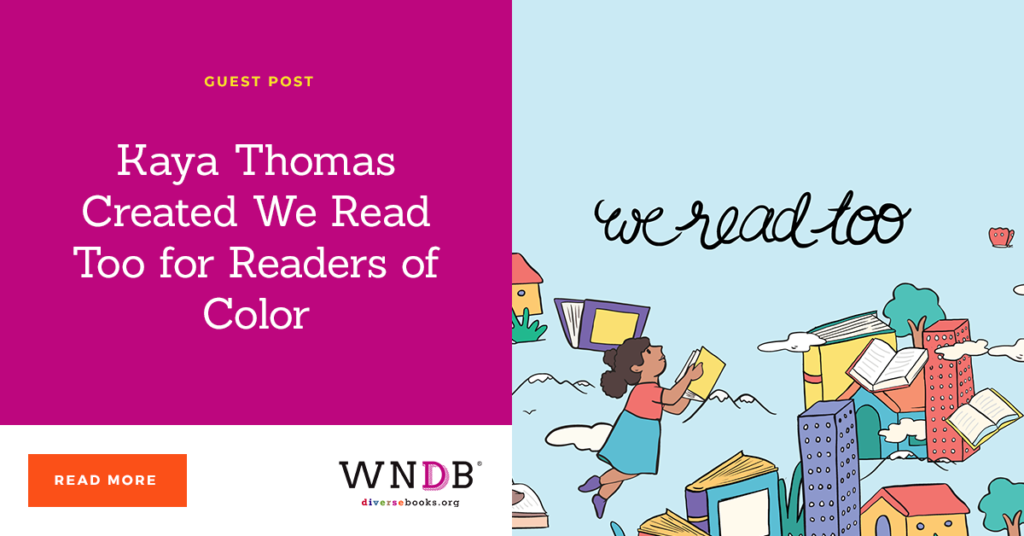 By Kaya Thomas, founder of We Read Too

I’ve always loved books. No matter how old I was or what I was going through, books were always a means of escape. I could learn, love, laugh, and grow all from a book. I also loved tinkering. I was constantly asking questions about everything. I always wanted to learn more and expand my mind. Books and tinkering were my first steps into a world of creativity, knowledge, and exploration.

When I was in elementary school, my parents would go to boutique bookstores throughout Harlem and Brooklyn to find picture books with Black girl characters so I saw myself in the books I was reading. As I got older and became responsible for choosing my own books, my relationship with books started to change. As I picked out books from the library, I paid more attention to how the characters were described. Yes, books were a means of escapism, but why did I constantly have to imagine myself as a white teen girl with blonde or brown hair and blue eyes? I searched long and hard, scouring the library for young adult books that had a main character with brown skin, brown eyes, and curly hair. They were few and far between. Was the literary world trying to tell me that girls like me weren’t important enough to write about?

Instead of continuing to search my local library, I began to look online and found that there were YA books with multifaceted characters of color out there! But I didn’t understand why they weren’t easily accessible in the libraries, bookstores, or the homepages of major bookseller websites. I felt empowered that I found the information but lost at how I could get it to all the other kids of color who probably felt the same way as me. So I tucked the idea in the back of my mind and knew I had to return to it someday.

After I started college, my idea regarding a resource of books for children of color came to the forefront. During the winter break of my freshman year, I started searching again and I put all the books I found into a word document. I ended up with over 300 books listed. But then I thought to myself, now what? I was watching TED talks when I came across one given by Kimberly Bryant, the founder of Black Girls Code. She said it was important for Black girls not only to be consumers of technology but to be able to create the technology themselves. This set a lightbulb off in my head. I’ve always loved tinkering and technology, so I decided to learn how to code. I spent the rest of my break coding and I loved it. I signed up for an introductory Computer Science course for the following winter term and from then on I knew I wanted to be a Computer Science major. I knew the skills I was learning could help me create a tool to help young people of color like myself find books where they are represented.

During the summer after my first year of college, I decided to create an iPhone app that would showcase all the great books I found written by authors of color featuring characters of color. I was learning iOS development for my summer internship at Time Inc, so after work, I would go home and work on my app idea.

I named the app We Read Too to signify that representation for children and teens of color in literature is important. After launching the application in the App Store, people from all over the country, and eventually the world started to download my app. Parents, educators, and students reviewed the app and relayed how important and helpful it was that I created it. I knew that if my app had even helped one person feel represented and show them that their stories are being told too, I had done the right thing.

It’s been six years since I launched the first version of We Read Too and there have been over 100,000 downloads. In 2017, I was able to crowdfund to get the Android version of the app made which launched in October 2017. In February 2018, We Read Too got its first feature in the App Store, and this year the directory is nearing 1,000 books. We Read Too will continue to grow and be a free resource for folks to find children and YA books written by authors of color featuring characters of color. 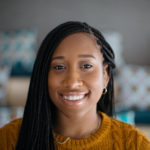 Kaya Thomas is an iOS engineer at Calm. Formerly she worked at Slack on the Messaging team. Kaya graduated from Dartmouth College with a degree in Computer Science. In 2014, she launched We Read Too, a book resource app that features titles written by authors of color. In February 2018, Kaya was featured in the App Store about We Read Too and what inspired her to create it. Aside from coding, she also enjoys writing and public speaking. Kaya has bylines in OneZero, Increment Magazine, Smashing Magazine, TechCrunch, Fusion and a published chapter in O’Reilly Media’s 97 Things Every Engineering Manager Should Know. She’s spoken at several conferences around the world such as dotSwift, UIKonf, AppDevCon, Laracon, Codeland, 360iDev, try! Swift, AltConf, and more.