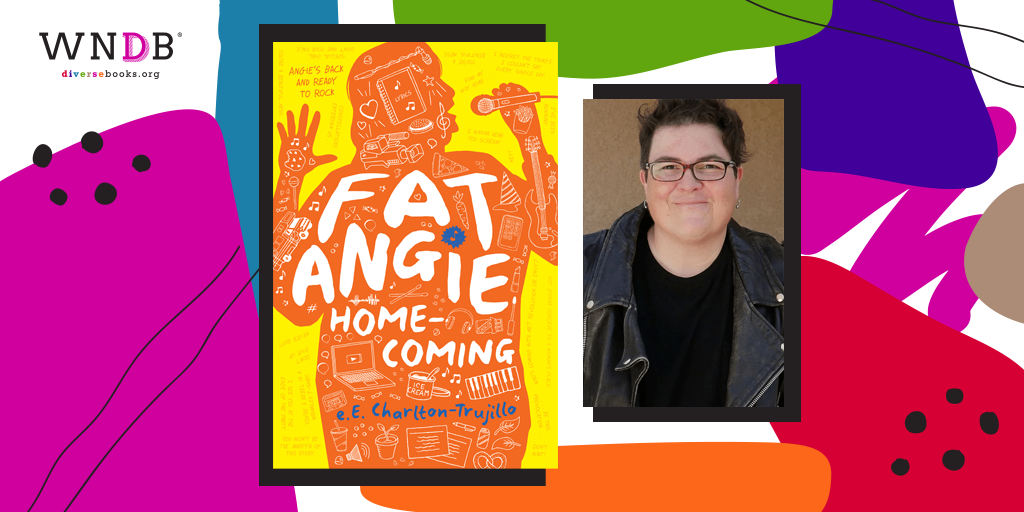 Fat Angie: Homecoming is out now.

About a year after publishing Fat Angie—the first book in my ALA-winning series—I visited an Illinois high school book club. I hadn’t spent a lot of time with book clubs. Most of the students I met in traditional and alternative schools, juvenile detention centers and libraries hadn’t read my book. So I wasn’t prepared for the magic that was about to unfold as we gathered chairs into a circle.

Because no sooner did the librarian finish introducing me, when a student, Destiny, raised her hand and launched us into a discussion enveloped in vivid detail and critical insight. Quickly, other students chimed in. Their questions and commentary were passionate and largely on par with any college-level discussion.

Now, I wasn’t stunned by their insight or their fervor (never underestimate the potential of impassioned young people). Rather, I was surprised that this book—my book—about an awkward, fat, athletically driven, queer teen whose very public nervous breakdown over her missing, war-hero sister was at the center of their excitement. The very book I wondered if anyone would read because of those topics, along with unusual pop-culture references, a fractured family and, yes, a fat girl falling in love with a perceived societal beauty by the name of KC Romance.

The thing to know is that Fat Angie was published before books like Julie Murphy’s Dumplin, Isabel Quintero’s Gabi A Girl In Pieces, This One Summer written by Mariko Tamaki and illustrated by Jillian Tamaki, and Amy Spalding’s The Summer of Jordi Perez. Because Fat Angie was one of the few books of its kind then, I think I carried an unconscious fear it wouldn’t be accepted because of its content. Ultimately, I came to realize that fear was really about my own insecurities of being queer and fat in a family that didn’t accept me as a kid.

Sitting in that circle of diverse, self-possessed young women discussing Fat Angie, a larger light began to gleam inside of me. If this story could ignite this much conversation, could a continuation of Angie’s story offer young readers more? With that, and at the urging of fellow author Pat Zietlow Miller, the seed was fully planted: Write a series.

A series that would live larger, take more risks, and delve into, as Angie says in book two, the ways in which, “Life is heart and ache.” Let’s be honest. That’s a pretty tall order.

With that, I scribbled eight basic rules on an oversized Post-It and secured it above my computer.

The Road to Heart and Ache Is Paved With Eight Rules 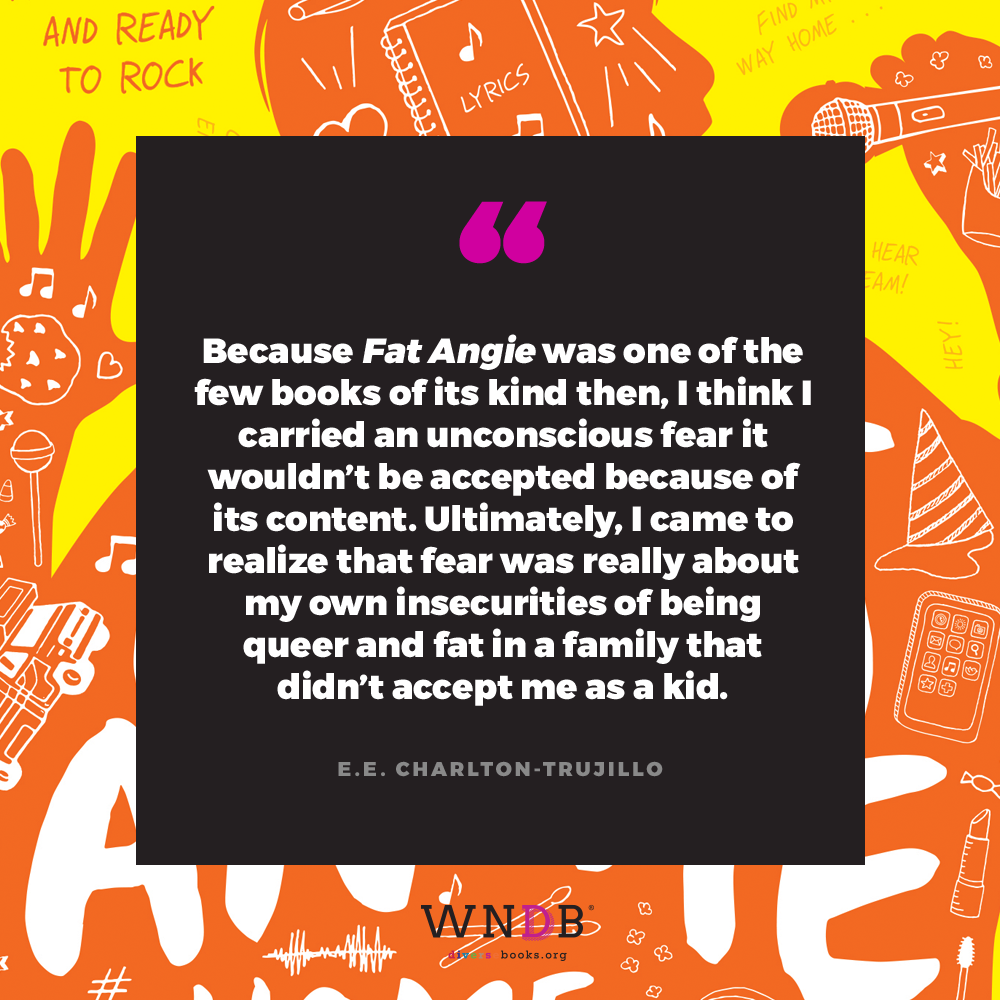 We learn at the end of Fat Angie there is a devastating loss for Angie coupled with inspiring personal victories. We know that Angie’s relationship with her abusive mother continues to be challenging, but there might be some middle ground to be met. And while the book closes on a hopeful note, like in life, things change.

Fat Angie: Rebel Girl Revolution returns the reader to Angie and her small hometown of Dryfalls, Ohio, nearly a year after book one. KC has moved on, emotionally and literally, leaving Angie in what feels like a wasteland of a new school year. While navigating heartbreak, grief, her overbearing mother and an aggressive, homophobic male classmate, life would seem a would-be downer for Angie.

But a list of tasks from Angie’s war-hero sister and the threat of a conversion-therapy-like facility sends her, one-time BFF Jamboree, and a duo of unlikely teens on a trip across Ohio in a relic RV. In a nod to The Breakfast Club (but queer, diverse, and on wheels), Angie not only begins to recognize how to pull herself out of the depths of grief but also finds the freedom and unbridled joy of stepping into her own power and talent. She ultimately realizes that her size, her awkwardness, and who she loves are not things to feel ashamed of. Rather they are parts of her story, and her story is a revolution! So there’s a big on-stage performance with a random band, potential romance, surprising reveals and…

Fat Angie: Homecoming—which released on November 2 from Candlewick Press—picks up five weeks after book two. While things at home with Angie’s mom are at near-critical meltdown, Angie is a walking rock star and ready, for the first time in the series, to ask a girl out. Before Angie can launch into her well-planned invitation, KC Romance rolls into town (on a sincerely sweet scooter), catapulting our fat-tastic heroine into a love triangle.

Since Angie’s big-stage performance in book two has gone viral, she finds herself famous for something good. Something that has nothing to do with her sister. When an opportunity to start an all-female band and enter a competition presents itself, Angie must face the wounds of her family and the wounds inside her that continue to get in her way. It’s an all-out rock ‘n’ roll, mash-up celebration that firmly and finally allows Angie the autonomy she has earned.

At the end of the three-book series, I learned five things I didn’t fully get until Angie came into my creative life.

Authors are known to often say, “I write the books I needed as a kid,” and yes, this is absolutely true of my experience with the Fat Angie series. These books are also the books I needed as a grown-up to heal some of the battles I fought in childhood. In writing these, I can hope to empower young readers to circumvent some of that hurt in the ache portion of life. To give them a place that reflects their experience or their size or their culture or their identity—their whatever makes them them.

I will forever be grateful to Destiny and the high school book club in Illinois from all those years back. Because when our time was up (we ran 45 minutes over), Destiny asked if we could take a group photo but hold the book in front of our faces. She clarified that it wasn’t an attempt at anonymity. It was because as she said and as the other kids agreed, “Everyone is Fat Angie.”

That’s what I learned that day and in the weeks and years that would follow. From kids at book festivals, schools, libraries, juvenile detention centers, homeless shelters, and virtual chats across America and beyond. That while we are different and our struggles are unique to our circumstances, we share universal experiences. Experiences of loss, love, joy, family, friends, and longing. Heart and ache.

That’s what it means, at least to me, to be Fat Angie.
#LoveYouAngie 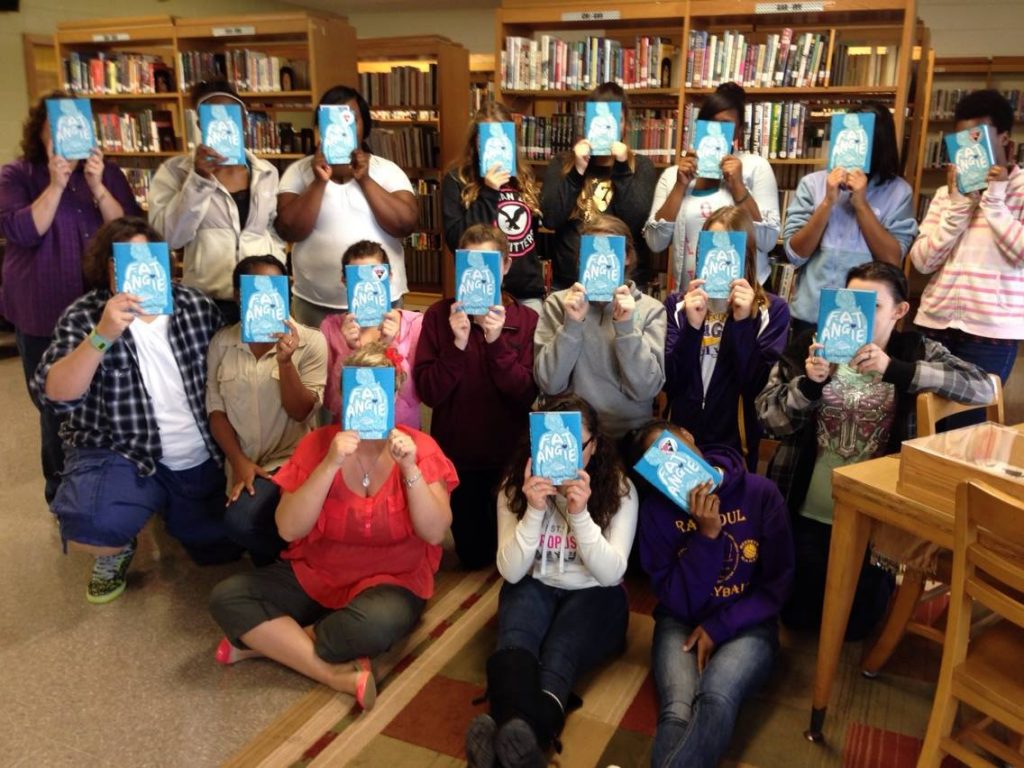 Mexican American author, filmmaker and youth literacy activist e.E. Charlton-Trujillo has written several award-winning books for teens and children, most notably the ALA Stonewall Award Winning Fat Angie series and “Prizefighter en Mi Casa,” a Parents’ Choice Silver Honor winner. Charlton-Trujillo’s short fiction appeared in the celebrated anthology “Living Beyond Borders: Growing Up Mexican In America.” Their debut picture book, co-authored with NYT Bestseller Pat Zietlow Miller and illustrated by Joe Cepeda, “Lupe Lopez: Rock Star Rules” releases Spring of 2022. Off the page, Charlton-Trujillo is a dedicated filmmaker, the co-founder of the nonprofit Never Counted Out and has enthusiastically served as a Madrina for the Las Musas collective.

Previous Post: « Q&A With Dan-ah Kim, The Grandmaster’s Daughter
Next Post: Q&A With Jason Reynolds, Stuntboy, in the Meantime »
Save the date for the #WalterAwards23! You can now