Your Mama by NoNieqa Ramos, illustrated by Jacqueline Alcántara, is out on April 6, 2021. Pre-order the book here!

How American society depicts the marginalized is the mirror to its soul. Please credit the New Testament Jesus and the mother of multicultural literature, Dr. Rudine Sims, for this statement. My fiction writer brain imagines the fairytale archetype of the beautiful queen who stands before the mirror shuddering at the reality of her ravaged face. Her white, cisheteronormative, fatphobic, anti-Black representation of beauty reflects the ravage of centuries of systemic white supremacy and oppression. In another analogy stands the vampire who has no reflection at all. Imagine the gaslighting that occurs when marginalized women stand in front of the American mirror. How has society trained us to perceive and evaluate ourselves through generations?

As a Latinx American of proud Puerto Rican/Taíno descent, I can’t help but reflect on one of the most visible women in our nation’s white-washed history—the Statue of Liberty. Emma Lazarus wrote:

Here at our sea-washed, sunset gates shall stand

A mighty woman with a torch, whose flame

Is the imprisoned lightning, and her name

What does the torch truly illuminate about our treatment of marginalized human beings, in particular Black, Indigenous, and women of color? Reflection of this treatment was an important consideration in writing my debut picture book Your Mama (Versify, April 6, 2021). A moderator for a panel “We are Family” called Your Mama the anti-Betty Crocker. Betty Crocker was an American cultural icon, a homage to white women—and fictional. Did she mean Your Mama was countercultural, nonconformist, sassy? Every book I write is a protest and an anthem so what is Your Mama’s declaration?

In this age of Aquarius 2021—and after canceling One Day at a Time—Netflix has determined it “needs more Latinx programming under a diversity audit.” But, despite this epiphany that ranks up there with one should wear a mask in a deadly global pandemic, I want to give credit where it is due. Rita Moreno (West Side Story, 1961) starred in the children’s television show The Electric Company. Though it stopped production in 1977, I caught her in the reruns that ran until 1985. Actor and writer Sonia Monzano (The Revolution of Evelyn Serrano, 2012), played the role of Maria on Sesame Street for 40 years. Despite Odyssean obstacles, powerful brilliant Latinx women have always been here.

When I was a kid in 1985, there were about 17 million Latinx people in America. In the entirety of my Pre-K-7 education at a Bronx school full of nonBlack Puerto Ricans, Afro-Latinx, and Black children, never once did we invoke Rita or Sonia’s names or a study a single Latinx artist, creator, scientist, leader, or pioneer—although I will give St. Dominics props for allowing Freestyle queen Judy Torres to perform her banger Come Into My Arms. Assimilation, a tool of colonization, is most insidious with the invasion of young minds. This invasion kindles with erasure and ignites with generational amnesia. We the marginalized are taught to be embarrassed by our mothers, our families, our heritage, our own reflections. We forget who are.

Before I proceed with a discussion of the racist representation of Latinx women, I need to step into the looking glass and decry the anti-Black racism of Latinidad and our historic erasure, exclusion, and abuse of Black Latinx women. PUNTO. Then I will ask you all to wear your chancletas as we step out onto the broken glass of white hegemony. Historically, white nationalists have created a narrative that speaking Spanish and/or having a Spanish accent indicates a low level of education, indicates poverty, and indicates cognitive disability. Until the 1970s when civil rights activists like Puerto Rican Bronx native Evelina Antonetty created the United Bronx Parents, white educators placed children in special education solely because their first language was Spanish. Speaking Spanglish, like African American Vernacular English (AAVE), is still only considered acceptable in the music the dominant culture can consume and appropriate. Spanish-speaking Latinx women can still expect discrimination and violence for speaking Spanish or having an accent. (Note, I said Latinx. Not white women like “Hilaria” Baldwin appropriating Spanish and Latinx culture.) After the 2019 shooting in El Paso in which a white domestic terrorist targeted Mexicans and killed 18 people, city councilperson Cassandra Hernandez said,  “People are afraid to be Hispanic.”

When we do speak English, how is the rep? As of 2018, only 4.5 percent of speaking roles in Hollywood were held by Latinx people, 13.8 percentage points below representation in the US census. Of that representation, you can expect to see a lot of Cameron Diaz. According to the Children’s Book Council, 5 percent of children’s books depict Latinx people, and of that 5 percent, you will find Susan Middle Elya, who is an exemplary example of a white woman who has been telling quality Hispanic stories for decades. At the beginning of my teaching career, I used her books myself. Something to think about when an award-winning Cuban writer just tweeted in lamentation that she has had dozens of picture books turned down. I know I’d certainly love to tell a Latinx fairy tale retelling. Estoy aquí. Nosotres estamos aquí. Talk amongst yourselves.

Asi que: Did I ever see the Latina role models who raised me exemplified in media or books? Can you think of any portrayal of Latinx women before 2000 who were students earning their degrees while single parents, educators saving children (Mandatory shout out to Edward Olmos. We watched Stand and Deliver (1988) until it melted in the VCR), business persons who supported their fellow Latinx women, photographers, and painters? (The Frida movie was in 2002.)  I knew they existed because they raised me. Society continues to teach children that successful Latinx women are the exception, not the rule—and when they do succeed, it is at the expense of friendship, family, cultural heritage, and community. 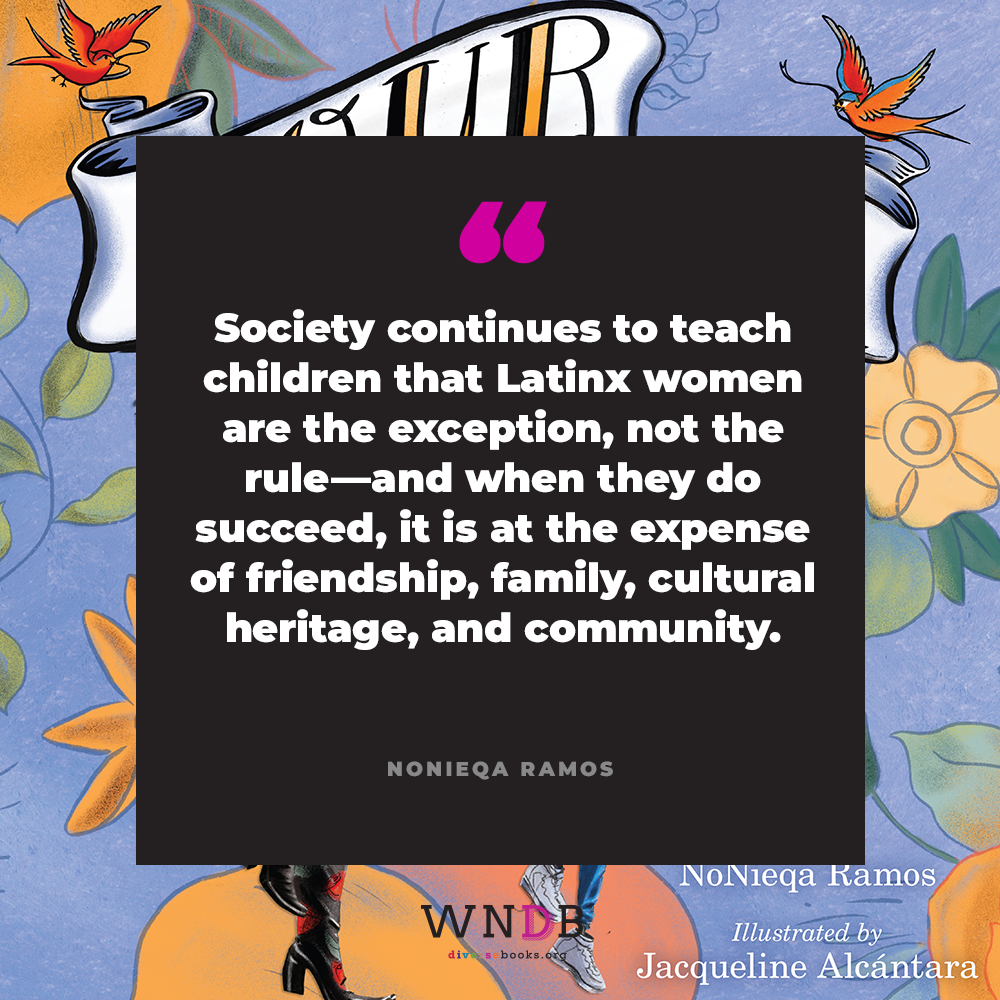 Let’s put J. Lo’s appearance in my teenagerhood aside for a minute. (Por supuesto, I adored Jenny from the Block back in the day and continue to respect her accomplishments as a dancer and actress.) What message has this country manufactured and broadcast loud and clear about Latinx women? How many portrayals before 2002 can you rattle off that featured Latinx women who were small-chested, fat, disabled, highly-melanated, neurodivergent? (The movie Real Women Have Curves came out in 2002.) The message this country broadcasts on repeat is that Latinx women—Nuyorican women, Puerto Rican born and bred women, Chicanx women—are a monolith.

Anyone remember the movie the Goonies (1985)? How about the actor Lupe Ontiveros, who played Rosalita, the Spanish-speaking housekeeper, taken in by Mouth (Corey Feldman). Ontiveros estimated that she had played a maid at least 150 times on stage and screen. She wanted to see more diverse roles available to Latina actors noting, “I’m proud to represent those hands that labor in this country. I’ve given every maid I’ve ever portrayed soul and heart.” What else did I see repeatedly as a child in addition to the white supremacist’s economic agenda carried out through stereotypes of the Latinx housekeeper? The drug dealer’s girlfriend trope. The drug dealer’s wife. And if the Latinx woman was truly empowered, the drug dealer’s widow, because she took over the business.

Today, our children will grow up learning about third-generation Bronxite, educator,  Congresswoman serving the 14th district of New York in the Bronx and Queens, and iconoclast, AOC, Alexandria Ocasio-Cortez. They will grow up reveling in Latinx picture books, middle grade, and young adult works by Latinx authors. And in movies of Las Musas and other brilliant Latinx creators. Have you added Pat Mora’s Love to Mama or Floating on Mama’s Song by Laura Lacamara to your collection? Or my debut picture book, Your Mama, which School Library Journal called “an essential purchase, this contemporary, high-spirited salute to motherhood is a warm and welcoming valentine to family and love.”

Our books only begin to excavate the dynamic, complex, powerful, unstoppable force that is the Latinx woman—

Your mama so fierce,

MVP of the year.

She’s why you are standing here.

Your Mama don’t mess around.

She taught you to be proud.

Pull on your high-heeled boots

and live your life out loud. 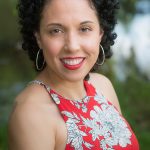 NoNieqa Ramos is an educator who wrote THE DISTURBED GIRL’S DICTIONARY, a 2018 New York Public Library Best Book for Teens, a 2019 YALSA Best Fiction for Young Adults Selection, and a 2019 In the Margins Award Top Ten pick. It earned starred reviews from Booklist, Voya, and Foreword. Hip Latina named her sophomore book THE TRUTH IS in “10 of the Best Latinx Young Adult Books of 2019.” Remezcla included THE TRUTH IS in the “15 Best Books by Latino and Latin American Authors of 2019.” You might find NoNieqa in Virginia salsa dancing with her soulmate and her children Prince Lango Tango and PrincX Rainbow Cat. 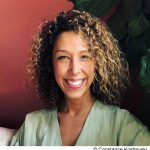 Jacqueline Alcántara is a freelance illustrator and artist who spends her days drawing, writing and globe-trotting with her dog Possum. She is particularly excited about promoting inclusiveness and diversity in children’s literature and the illustration field in general. Her debut picture book, THE FIELD, written by Baptiste Paul, was named a Best Book of 2018 by School Library Journal, Horn Book, Kirkus Reviews, and Shelf Awareness. FREEDOM SOUP, written by Tami Charles, received four starred reviews and has been named a Kids IndieNext Pick and a Kirkus Best Book of 2019. Her latest picture book, JUMP AT THE SUN, written by Alicia D. Williams, is out now with four starred reviews.

Previous Post: « Why My Graphic Novel Has an All-Queer, All-Latinx Cast
Next Post: Cover Reveal for Usha and the Big Digger by Amitha Jagannath Knight, Illustrated by Sandhya Prabhat »
Happy pub week to LOVEBOAT REUNION by @abigailhing