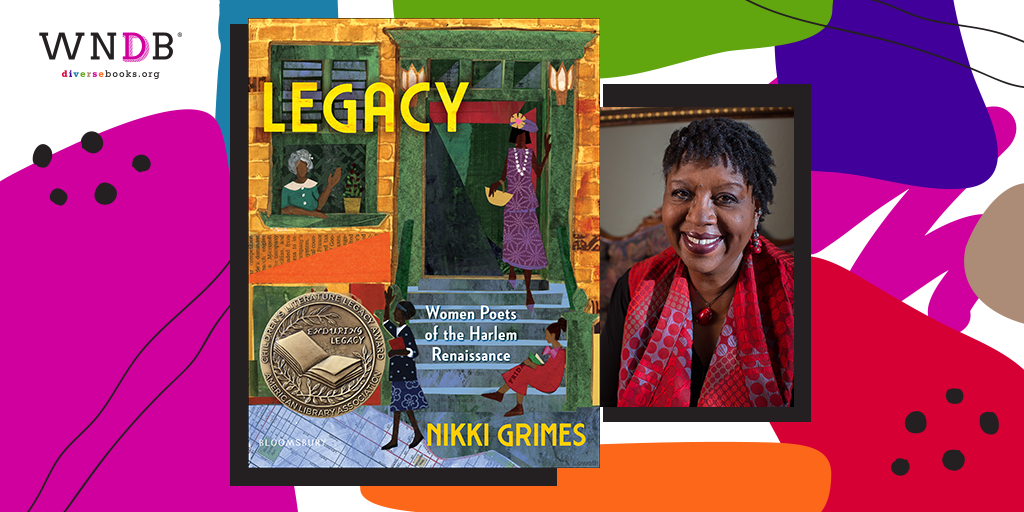 I set out to write Legacy: Women Poets of the Harlem Renaissance with the clear intention of introducing young readers to some of the unsung female poets of the period, like Clarissa Scott Delany who only lived long enough to publish four poems, or Blanche Taylor Dickinson who disappeared from the public record after 1929 but left powerful poetry in her wake. I want all readers, Black readers especially, and Black girls, in particular, to know that the sky is the limit for them. Reading both the poetry and the biographical background of these women gets them one step closer to believing it. And isn’t that something we all want?

To be honest, digging into this bit of literary history ended up being a huge gift from me to myself. Not only did I discover some literary lights of whom I was previously unaware, but I also learned that there were more highly accomplished Black women educators, scholars, and creators during the early nineteen hundreds than I’d ever have imagined. With each woman I met and researched, I stood a little bit taller, basking in the glow of her beauty and well-rounded brilliance. Ida Rowland was one of those bright lights.

Hailing from Texas, Ida Rowland emerged toward the tail-end of the Harlem Renaissance. Her single collection of poetry, Lisping Leaves, secured her place on the list of Renaissance poets. Her subject matter—migrating birds, coyotes, and rolling plains—reflect her heartland background.

Obviously, I loved her poetry, or I wouldn’t have included her here. The poem I chose for Legacy was “Autumn Evening,” a poem about the beauty of a lake on a stormy autumn day, and what captured my attention was the line, “like crumpled silver in the stinging winds.”  I couldn’t shake the image. It made me think of something beautiful and strong, yet vulnerable, and it led me to write a poem about a Black woman battling the rough winds of cancer.

Cancer keeps trying to pin my mother to the mat like

a wrestler.  But it’s no match for her.  However crumpled

up some weeks feel during chemo, she finds the silver

in each day—like the way our family crams in

more love for each other—Mom, Dad, my brother and me.  The

lesson learned in this fitful squall with its grey-tinged stinging

slant of rain?  Cling to the good, despite the crushing winds.

I’m glad I finally discovered Ida Rowland, the poet. Yet, her university vita interests me even more. It paints the picture of a Black woman whose image rarely makes the news. Rowland was a most distinguished academic.  In 1936, she earned a Bachelor’s degree. A master’s in Sociology from the University of Nebraska-Omaha followed that in 1939. She later attended Laval University in Quebec, where, in 1948, she became one of the few Black women of her generation to earn a Ph.D. She put that education to good use, in part, as a professor at the University of Arkansas-Pine Bluff (formerly Arkansas AM&N). 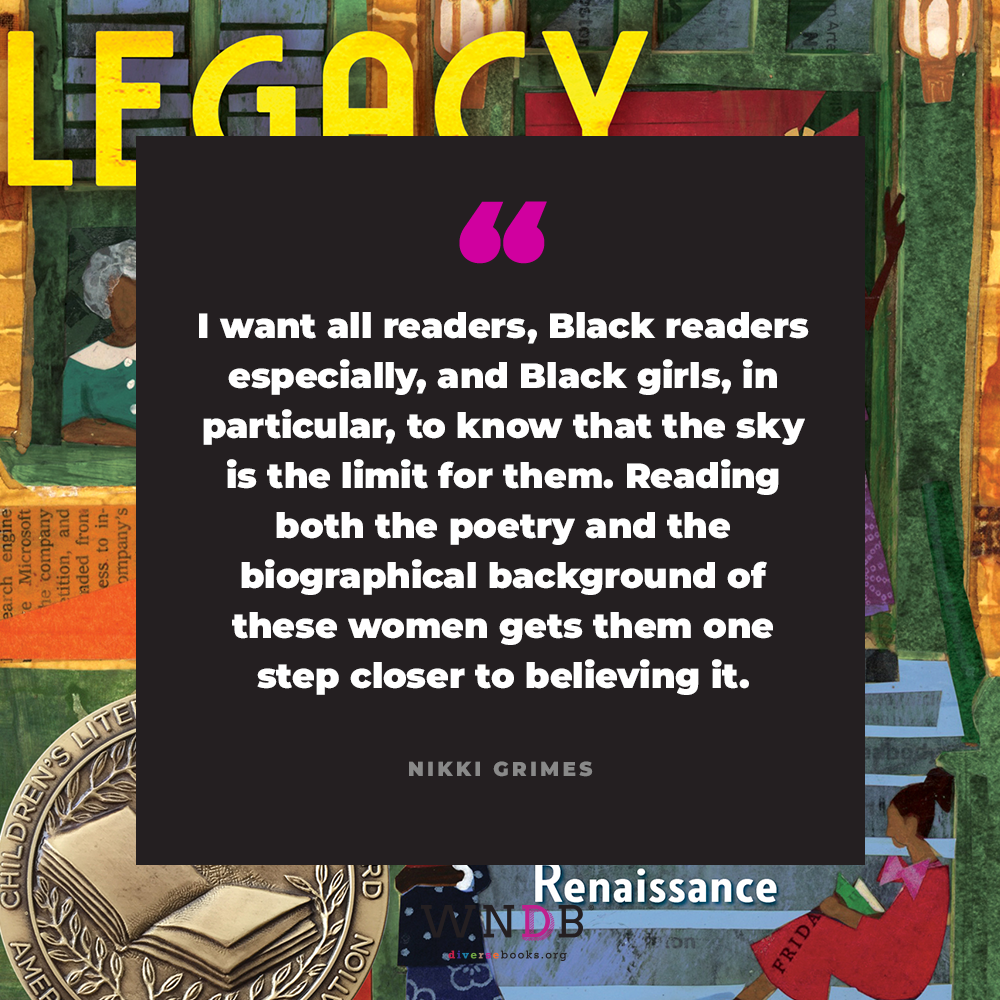 Upon retirement, Rowland rounded out her accomplishments by starting a publishing company to produce books about African Americans, designed for young readers! Yes, you read that right. I was pleasantly surprised to learn that Rowland, along with several other poets included in Legacy, like Effie Lee Newsome and Gertrude Parthenia McBrown, responded to the need for diverse literature for children during the Harlem Renaissance, long before “diverse literature” came into the vernacular.

Legacy is a collection of poetry, of course, so you might well ask, what difference does Rowland’s academic background and accomplishments make? Well, the young Black readers and readers of color encountering this information on the page might well think, “If a Black woman like Ida Rowland could pursue the highest possible graduate degree way back in 1948, then I can do the same in 2021.” That matters.

WHAT GIRLS CAN DO

boxing us in: girls can’t, shouldn’t, won’t, wouldn’t. To

him, a girl’s only purpose is helping a boy rise

to his potential—as if girls are devoid of skill and

Legacy: Women Poets of the Harlem Renaissance by Nikki Grimes is on sale on January 5, 2021. Order it here! 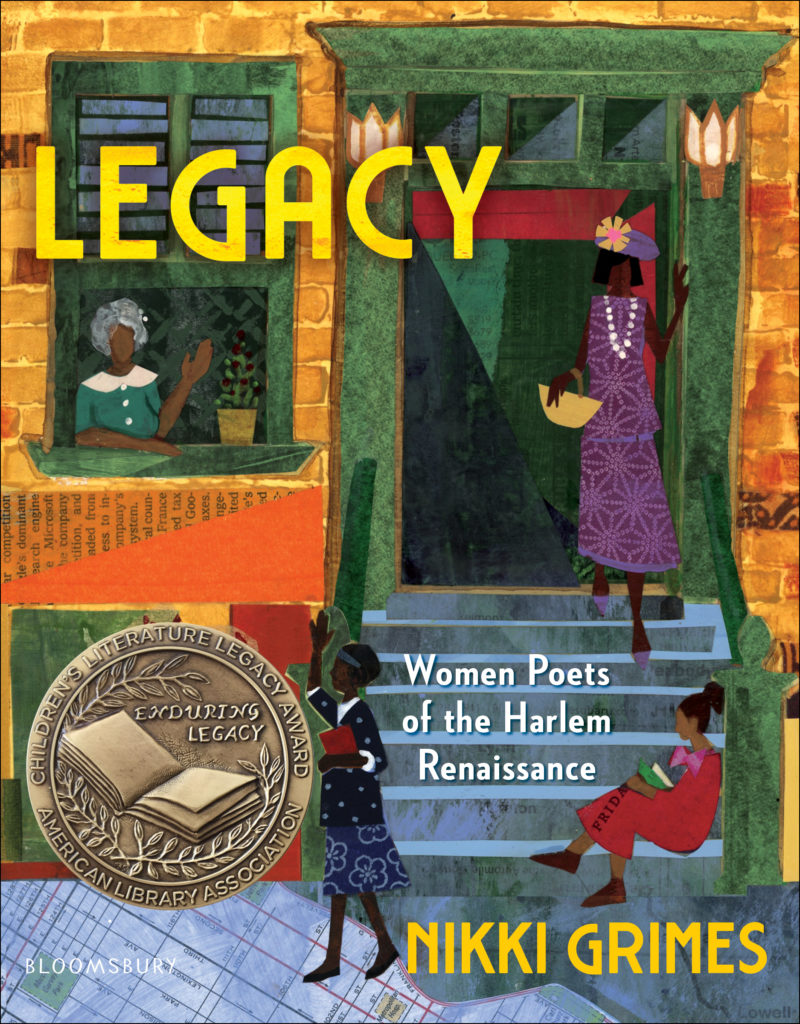 For centuries, accomplished women–of all races–have fallen out of the historical records. The same is true for gifted, prolific, women poets of the Harlem Renaissance who are little known, especially as compared to their male counterparts.

In this poetry collection, bestselling author Nikki Grimes uses “The Golden Shovel” poetic method to create wholly original poems based on the works of these groundbreaking women-and to introduce readers to their work.

Legacyalso includes a foreword, an introduction to the history of the Harlem Renaissance, author’s note, and poet biographies, which make this a wonderful resource and a book to cherish.

Nikki Grimes is a New York Times bestselling author and the recipient of the Children’s Literature Legacy Award, the Virginia  Hamilton Literary Award, and the NCTE Award for Excellence in Poetry for  Children. Her distinguished works include Southwest Sunrise, illustrated by Wendell Minor; the Printz Honor and Sibert Honor book Ordinary Hazards; NAACP Image Award nominee  Planet Middle School; Coretta Scott King Award winner Bronx Masquerade; Coretta Scott King Author Honor books Jazmin’s Notebook, Talkin’ About Bessie, Dark Sons, The Road to Paris, and Words with Wings, which was also named an ALA Notable Book; and What Is Goodbye?, an ALA Notable Book. She lives in Corona, California.

Previous Post: « Q&A With Maika and Maritza Moulite, One of the Good Ones
Next Post: We Need to Honor African Traditional Religions on the Page »
Congratulations to the 2023 #ALAYMA winners and ho