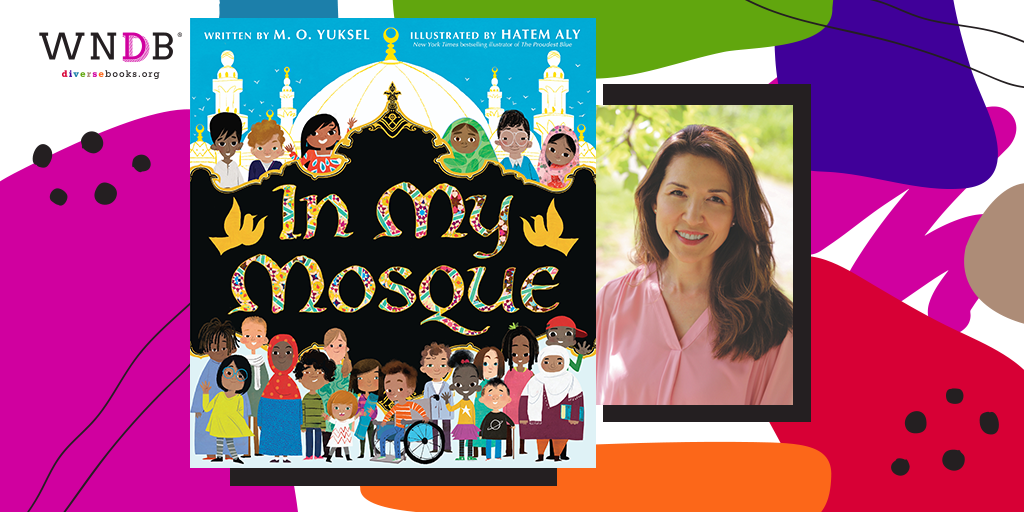 My picture book debut, In My Mosque, celebrates Muslims from many places and in all shades of skin color from Asian, Black, Latinx, and White communities, and so much more! We speak different languages and represent a variety of rich cultures across the globe. To some, a Muslim, or a person who practices the religion of Islam, is an Arab from the Middle East, or South Asian from Pakistan or India. But similar to other faiths like Christianity, Islam is practiced worldwide by many races, ethnicities, and cultures. In fact, Islam is one of the most ethnically diverse religions in the world. There are approximately 1.8 billion Muslims and they live in almost every continent, and in every country.

I’m of Uzbek descent and I was born in Turkey. Although I grew up in the US, and have lived here most of my life, I’m consistently asked questions like, “Are you Korean? Chinese? Japanese? Filipino? Thai? Vietnamese?” When I say no to all the above, and answer, I’m Uzbek and Muslim, the reply usually is, “Oh, you’re from the Middle East.” Somehow, my Asian features suddenly seem to melt into the background, and people lump me into one monolithic understanding of who Muslims are. My race, ethnicity, and cultural heritage are erased.

Hollywood movies typically depict mosques as mysterious, scary places looming in the background as something terrible is about to happen. In the past few decades especially, politicians and the media have bombarded the public with negative images such as the need for mosques to be monitored and spied on by the police, and the need for a Muslim ban and registry. 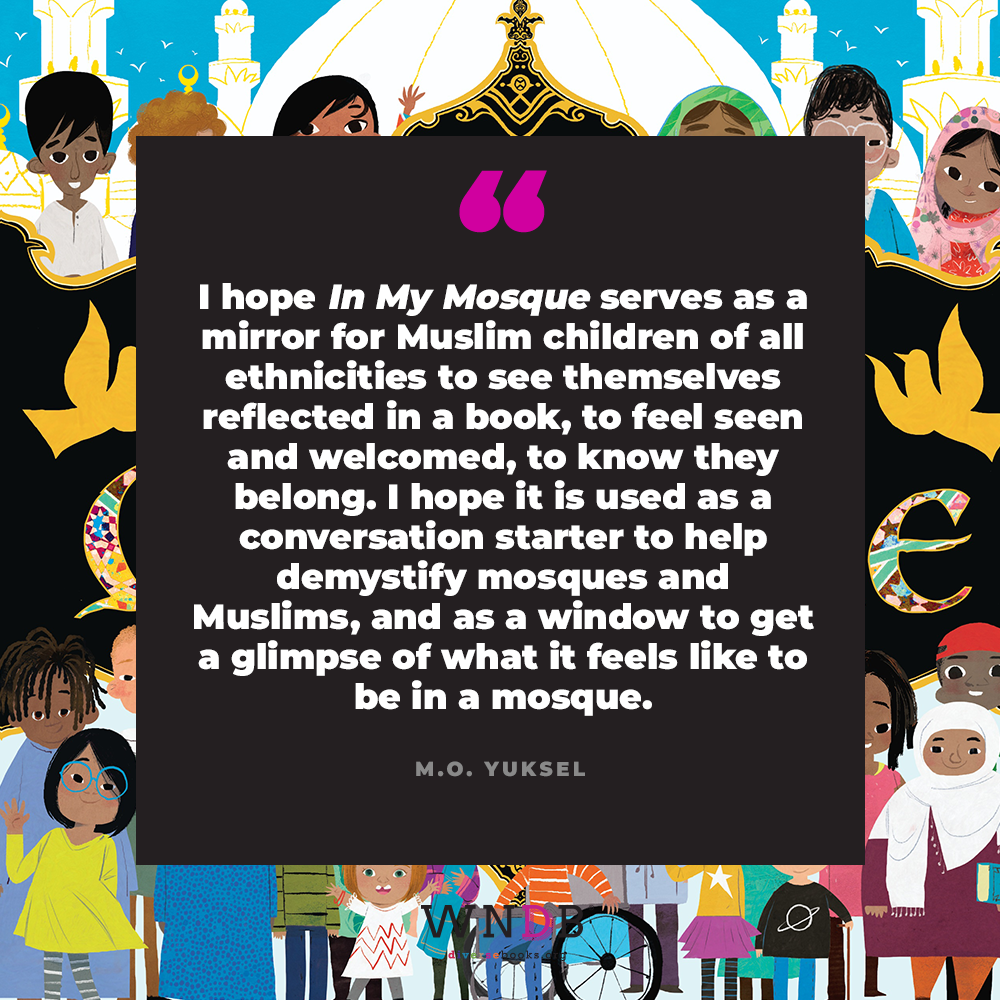 As we’ve experienced in recent history, we know how powerful words and images can be. The mass media, Hollywood, and politicians have a history of depicting underrepresented groups through a limited and biased lens. These negative portrayals and the lack of proper representation create dangerous and dehumanizing stereotypes and misconceptions that lead to social and political discrimination, racism, and hate crimes.

With In My Mosque, I wanted to write a story about my personal experience attending mosques around the world, from Asia to Europe to North America. Each mosque, also referred to as masjid, I have attended has its own unique architecture, and the feeling of serenity and hospitality imbues me in each space. I wanted to share the diversity of Muslim people and demonstrate that mosques are not only places of worship but also cultural and community centers that offer services like wedding and funeral ceremonies, educational programs, and holiday celebrations, to name a few. Many mosques even have charitable institutions like soup kitchens, hospitals, and schools within their complexes.

Hatem Aly, the illustrator of In My Mosque, shares the diversity of people and mosque architecture in the pages of the book. Through his stunning illustrations, we visit many mosques, traveling from one country to another, from one continent to the next, experiencing the activities and the services offered. 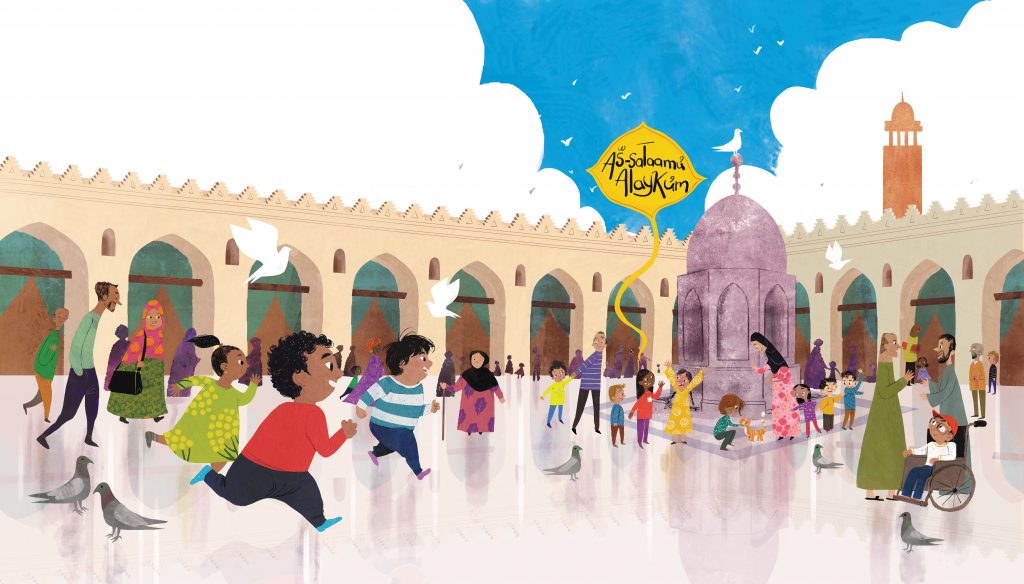 Hatem Aly’s illustrations share more than one large dome and a few minarets or tall towers. The work centers the structures of mosques as they relate to the location and culture around them. The regional traditions of the place and time period usually shape the architecture of a mosque. For example, in China, the Great Mosque of Xi’an, built in the eighth century, showcases traditional Chinese architectural forms. The buildings in this mosque complex are an octagonal pagoda and another is a timber building, with Chinese and Arabic calligraphy. Another example is the Great Mosque of Djenne in Mali, built in the thirteetn century. It is one of the most unique religious buildings and the largest earthen mud structure in the world. We see it here in Hatem Aly’s beautiful illustration: 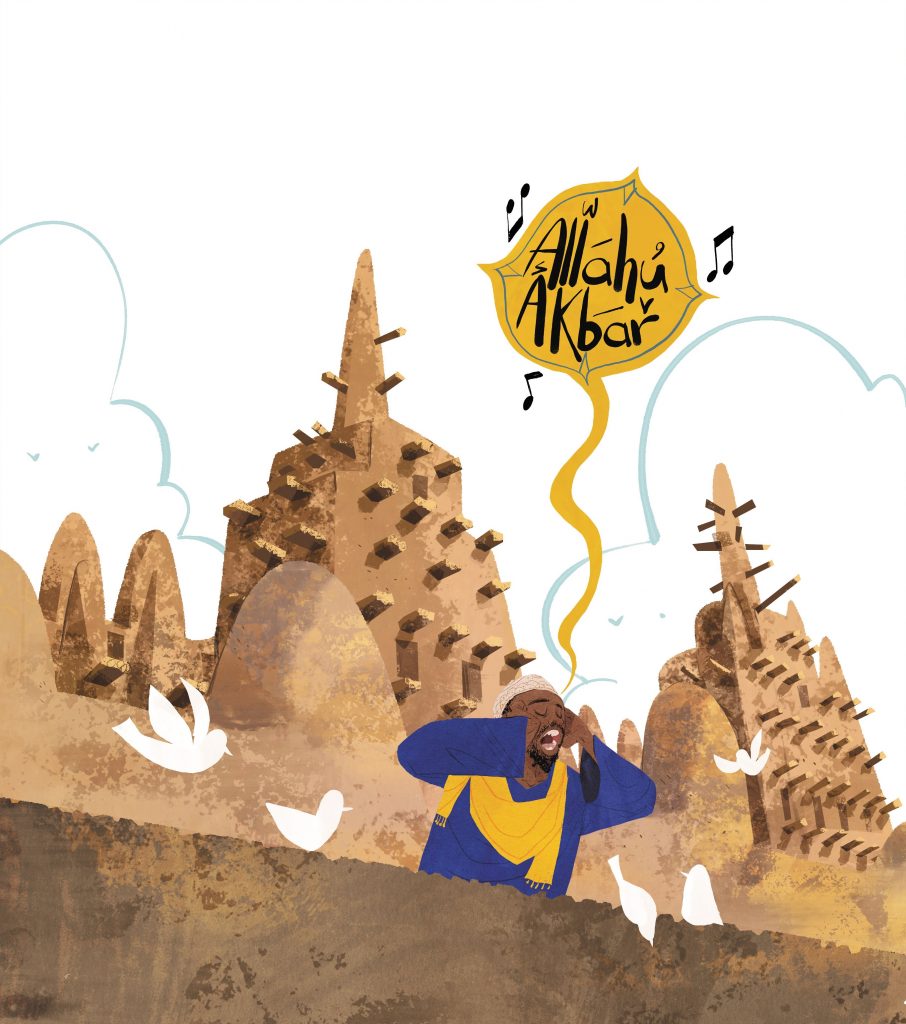 The back matter of In My Mosque features many more famous and historic mosques with fun facts like these.

Diverse books are very important to counter negative stereotypes, to disrupt the one-dimensional portrayal and misinformation of underrepresented groups, and to build common ground and a sense of inclusion for all children. I hope In My Mosque serves as a mirror for Muslim children of all ethnicities to see themselves reflected in a book, to feel seen and welcomed, to know they belong. I hope it is used as a conversation starter to help demystify mosques and Muslims, and as a window to get a glimpse of what it feels like to be in a mosque, what activities take place there, and to see that Muslims come in all shapes, colors, and sizes. I hope it provides a platform to help understand our shared humanity and the things we have in common. And I hope we have more books that reflect the many narratives and perspectives of the diversity of cultures, traditions, and histories of Muslim people around the world. 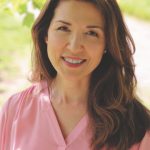 M.O. Yuksel is passionate about diverse voices and books. A first-generation immigrant with Uzbek roots and Turkish birth, she has been a teacher, education administrator, globetrotter, and yoga and meditation teacher. She loves visiting mosques and admiring the beautiful architecture. When not writing, she’s usually on the soccer field cheering for her kids or traveling to exotic places and immersing herself in the local culture. M.O. Yuksel is the author of In My Mosque, and the upcoming picture book, One Wish: Fatima al-Fihri and the World’s Oldest University, illustrated by Mariam Quraishi (HarperCollins, 2022). She can be found online at moyuksel.com.