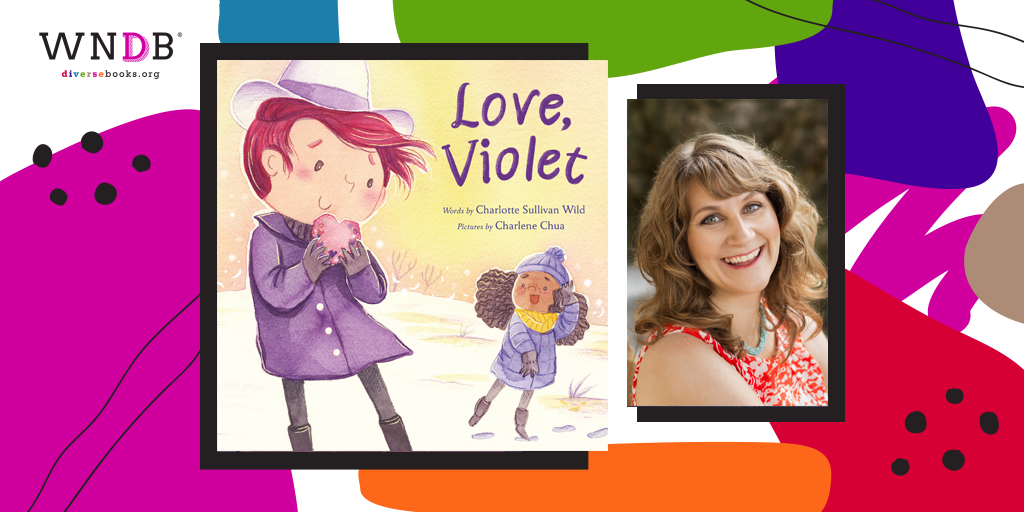 Love, Violet by Charlotte Sullivan Wild, illustrated by Charlene Chua, will be released on December 21, 2021 by Farrar, Straus and Giroux (BYR). Preorder it here.

A tale of young love and the courage it takes to share your heart!

Of all the kids in Violet’s class, only one makes Violet’s heart skip: Mira, the girl with the cheery laugh, who races like the wind. If only they could adventure together! But every time Mira comes near, Violet goes shy. As Valentine’s Day approaches, Violet is determined to show Mira just how special she is. Charlene Chua’s warm, luminous watercolors bring to life this sweet and gentle LGBTQ+ picture book about friendship, love, and the courage it takes to share your heart. 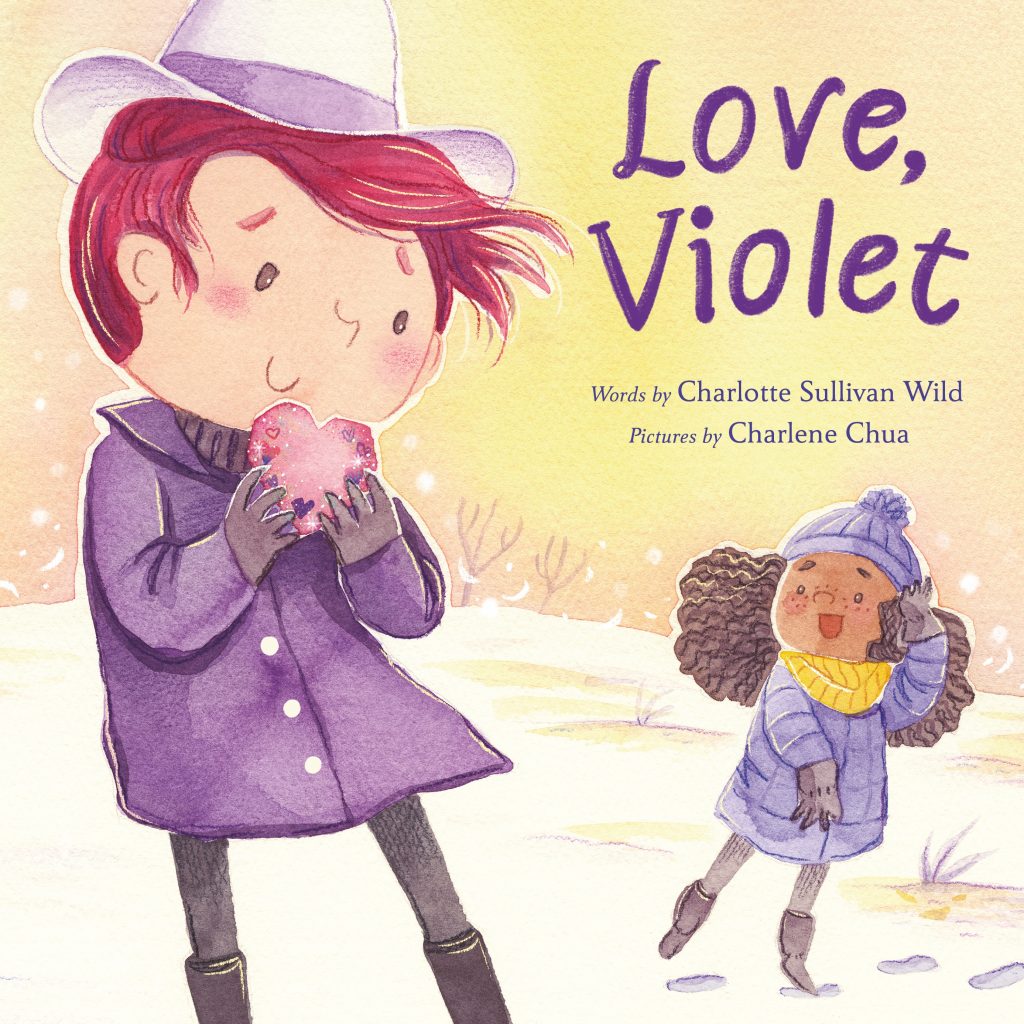 One I’ve waited for my entire life!

Love, Violet, warmly illustrated by Charlene Chua, is the story of a crush between two girls and the courage it takes to share your heart—even when it’s pounding. For so long, I feared this book might never exist. But then, for a long time, I didn’t know I could exist either.

It wasn’t until my thirties, in 2006, that I finally understood I was lesbian. What an upheaval that was! I grew up during the 1970s to early ’90s and hailed from a Very Evangelical Family of ministers in the upper Midwest. I was a professor at a religious college. I was married to a man. Coming out meant wrecking everything. Also, it was liberation! I made sense! I could live in my body, love completely. I’ll never forget that joy!

But my next question was: How had I not known?

The evidence was everywhere: refusing to kiss my boyfriend, imagining my fiancé as a woman, writing fiction about lesbians with pastor dads, all the way back to baby crushes on girls in preschool. I was SO gay.

How had I not seen myself?

I realized that as a child not one person or story
had shown me that queer love (or I) could exist.

I’d been ghosted.
Meaning: erased.
And when queer images did slip through,
they were inhuman, terrifying specters.

So I’d ghosted myself, too.
To be safe.
And loved.

Then memories returned.
I had noticed my orientation, many times.
But always I’d ordered myself: NEVER TELL. FORGET.
And I did forget.
Even so, love always felt… impossible.
I felt impossible.

But in 2011, free and out and incandescently in love,
I wrote the story I’d always needed.
A story to de-ghost queer childhood.
A story about those first whirling feelings and (mis)adventures of young love.
Inspired by the details of my first crushes and those of my queer friends,

I wrote a valentine to my young self
and to every kid. 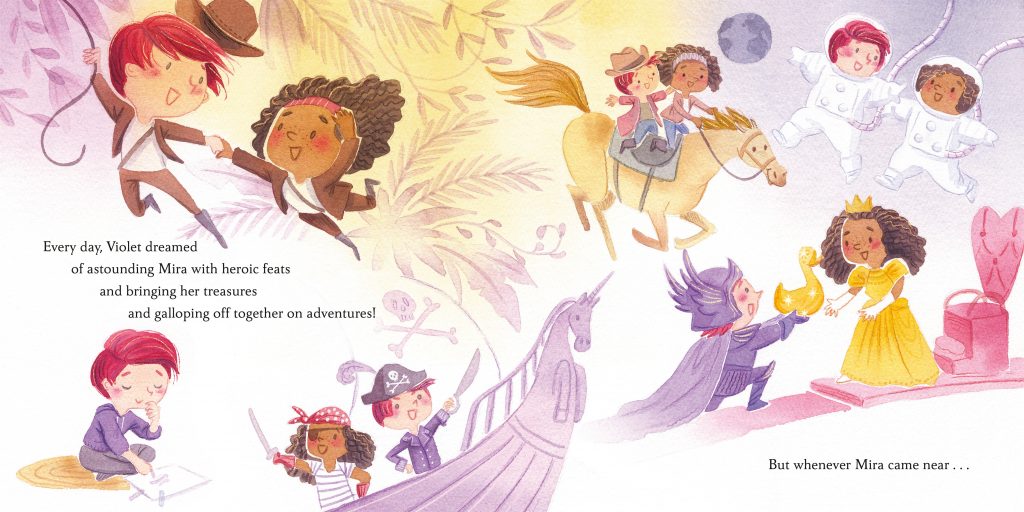 As I began crafting Love, Violet, I knew the forces of ghosting remained strong. It had only just become legal for my wife to be out at her job. But even I underestimated its power. One day in 2012, my four-year-old niece asked, “How come sometimes girls marry girls?” I answered, “Some girls, like Aunty and me, are born liking girls.” She seemed to accept this. After all, she had known us as a couple her entire life.

Then she declared firmly, “But they’re not a prince and a princess.”

Her stories were more real than her family.

That same summer of 2012, full of hope, I went to an LGBTQ+ meet-up at a children’s literature conference. As I described Love, Violet, I watched the expressions of two queer editors whose work I deeply admired. Perhaps they would bring this book to life!

Instead, they exclaimed in unison:

Why would you write a PICTURE BOOK about THAT?!

I expected this question.
Just not here.
Not from people who had lived what I was portraying.
And who probably knew the pain of ghosting personally.

But they also knew how hard it would be to sell: a story about ghosted kids.

Folks are easily spooked by ghosts.

I began to think long and hard about ghosting,
about how and why it persists.
About how to make it STOP.

This fear of ghosted characters, even among allies (and ourselves), isn’t an accident. Society has long punished people for queerness. Also, until very recently, LGBTQIAP2S+ childhood has been completely ghosted from children’s stories. We might glimpse ourselves in a few coded characters: our favorite spy Harriet, Oliver Button, Jo March, and my true love, Anne of Green Gables. But even these characters were created for a cisgender, heterosexual (cishet) world (often by closeted authors). Villains, however, commonly read as queer. Take the sea witch, the evil magician, the murderous uncle.

What are kids to think?

Being a “good” queer kid, according to the stories, is impossible.

If you (are queer and) want a happy ending,

to love and be loved…

Ghosting is powerful because it lingers after we know better.
It haunts.
It did for me.

Given the ghostly world in which we are raised, even the most empathetic of us must work hard to see through ghosts to real people. (Even ourselves.) It takes deliberate, ongoing de-ghosting to truly see one another. Not as labels, not as specters, but as human family.

But if we shudder, if we look away, fear wins.

Inaction is also ghosting in action.

After reading a memoir about a gay man caring for his dying spouse, my student said, I’d never thought of homosexuality as a person before.

A religious mother told her child:
It would have been better to have an abortion than a gay kid like you.

Too many people,
including those seeking shelter at Thrive Youth Center,
have told me stories
of being beaten by their families,
sent to exorcisms or conversion “therapy,”
punished with gang rape,
left in agony by nurses who wouldn’t touch them,

left to drift as ghosts….

Some tried to become ghosts.

Too many have succeeded.

Ghosting is never passive.
It is always violent.
And it works.

Ghosting is permission to not care.

It’s the lie: They brought it on themselves, being like THAT.

Ghosting grants permission to peers and police,
teachers and bosses,
judges and lawmakers
to not only ghost us from equal protection and opportunities,
but to target,
endanger,
and show us exactly
how unwanted we are.

It teaches children to ghost each other.

(Why won’t you just disappear?)

I knew the cost of ghosting, especially for kids.

But for a long time, no publisher wanted Love, Violet. Yes, editors responded to Violet’s true, intense feelings! “This reminded me of my young crushes!” Yet they couldn’t picture boys reading about girls, cishet kids caring about queer ones, adults sharing this story with kids.

In publishing, ghosting sounds like this: Diverse stories aren’t universal.

Implying: People from majority experiences and identities
can’t see you as human,
as “relatable”
or worth caring about.

Around 2015-16, my agent and I pulled Love, Violet from submission.
We waited for the world to change.

Look at this new wave of rainbow picture books! How marvelous to see more transgender and nonbinary kids, queer elders and BIPOC characters and creators (here and here)! I’m thrilled by books like My Rainbow, by Trinity and DeShanna Neal, illustrated by Art Twink (2020), in which young Trinity seeks hair that is both comfortable and honors the “masterpiece” of herself as Black, autistic, and transgender! Ghosting is the method for every prejudice, and an intersectional book like this one would not have existed even a few years ago. Despite disturbing attacks on BIPOC and queer books in schools and libraries right now, de-ghosting IS underway!

Still, some ghosts are stubborn. Strangely, almost no picture books depict queer orientation in child characters. Even with this new wave, I’ve only found two stories about crushes between boys: From Archie to Zack by Vincent X. Kirsch (2020) and Jerome by Heart by Thomas Scotto, illustrated by Olivier Talluc, translated by Claudia Zoe Bedrick (2018)—notably first published in France. Love, Violet may be the first picture book to celebrate young love between girls! What an exciting change!

But why are these stories taking so long?

Perhaps these old lies are haunting us still:

Through the lens of these lies, Love, Violet appears dangerous, even sexual. Yet, there is NO physical affection, not one word about gender or orientation in the story. I only included actions and feelings that people I know, including me, experienced by the age of Violet and Mira, about seven.

Adults bring their own ghosts to this story. And scare themselves.

The only cure for this haunting is to see queer kids as PEOPLE.

And that is only possible
when people drive out fear 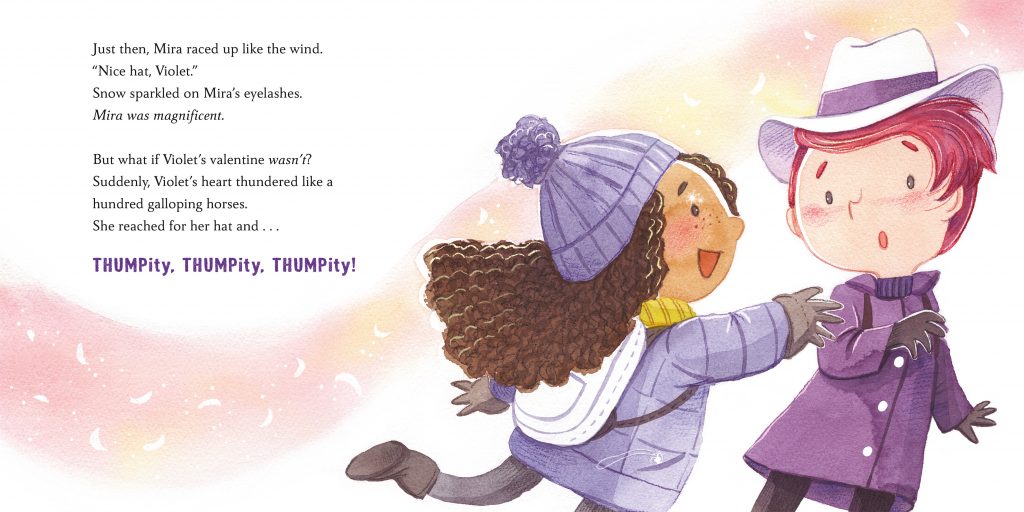 This is a love story!

And without realizing it,
I wrote a book all about de-ghosting—simply by writing about love!

Violet adores Mira, racing like the wind, snow sparkling on her eyelashes!
BUT: Violet is petrified. (What if she isn’t good enough? What if Mira rejects her?)
Violet sees Mira through a lens of love—but herself through terror.
(And she nearly ghosts herself
from her own love story.)

Violet must look past the ghastly specters—to see herself through LOVE.

As we all must do  for each other.

Love, Violet feels like a valentine for us all.
One we’ve waited for our entire lives.

At last, I see myself!
I see my wife, our friends!
I see so many kids embracing themselves, accepting each other!

Charlotte Sullivan Wild was first struck speechless by a crush in preschool. In grade school she may have cut and pasted a special Valentine for someone and been too shy to sign it. But she’s not shy about love anymore! She has loved teaching, selling books, and talking about books on the radio. Her first picture book is The Amazing Idea of You, illustrated by Mary Lundquist. Originally from snowy Minnesota, she now lives wherever her wife is stationed, from Texas to Italy, to see what they might find—together! She is represented by Minju Chang at BookStop Literary Agency. Learn more: www.charlotteswild.com

Previous Post: « Q&A With Wendy Xu, Tidesong
Next Post: Q&A With Dara Beevas of Wise Ink »
Congratulations to the 2023 #ALAYMA winners and ho