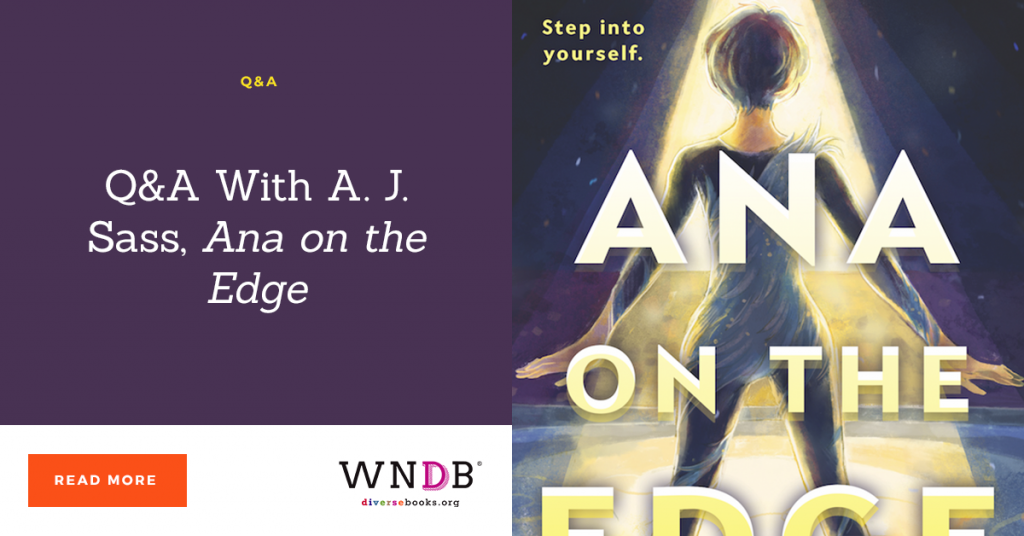 Today we’re pleased to welcome A.J. Sass to the WNDB blog to discuss their MG novel Ana on the Edge, out October 20, 2020!

To read an excerpt from Ana on the Edge, click here.

Twelve-year-old Ana-Marie Jin, the reigning US Juvenile figure skating champion, is not a frilly dress kind of kid. So, when Ana learns that next season’s program will be princess themed, doubt forms fast. Still, Ana tries to focus on training and putting together a stellar routine worthy of national success.

Once Ana meets Hayden, a transgender boy new to the rink, thoughts about the princess program and gender identity begin to take center stage. And when Hayden mistakes Ana for a boy, Ana doesn’t correct him and finds comfort in this boyish identity when he’s around. As their friendship develops, Ana realizes that it’s tricky juggling two different identities on one slippery sheet of ice. And with a major competition approaching, Ana must decide whether telling everyone the truth is worth risking years of hard work and sacrifice.

The protagonist of Ana on the Edge, Ana, is a competitive figure skater. Why did you want your main character to be a competitive athlete and how did you portray the pressure on kids who are involved in competitive activities, as well as the joy and pride?

Athletes share a lot of the same traits, regardless of the sport in which they train: Work ethic, determination, and passion, to name just a few. I believe people can appreciate these qualities, whether they’re an athlete themselves or a spectator.

In Ana on the Edge, I got to describe the freedom of flying across the ice, of centering a hard spin, or finally landing a jump you’ve been learning for months, all through the eyes of a talented athlete. There’s nothing quite like that feeling of accomplishment, and I hope I portrayed it in a way that is relatable to readers. Pressure is also a common part of competitive sports, and Ana faced it both on the ice and off, being acutely aware of the training costs fronted by her single mom and how her continued success hinges on these financial sacrifices.

Like Ana, you’re a competitive skater. How did you draw from your own experiences skating for this story? Were there any plot points you feel benefited from your firsthand knowledge, and did you embellish or change anything about the world of skating to fit the story?

One of the neat things about writing about a sport I participate in myself was getting to draw from my memories from daily training sessions to national competitions, then applying them to Ana’s unique circumstances. I remember battling nerves as I took my opening pose before the start of my program. The visualization techniques my coach gave me. And I definitely remember the distracting swish of a skating dress that didn’t tell the right story about my identity. These are some of my memories as a skater that I incorporated into Ana’s story (although Ana is one hundred percent more confident in front of judges than I ever was!).

Likewise, descriptions of Ana skating benefited from my technical knowledge, and one of the biggest plot points even more so: In my initial drafts, Ana’s main goal is to qualify for her second national championship. But while I was revising, a major change in skating’s competitive pipeline went into effect, one that removed Nationals at the sport’s lower, developmental levels—including the level Ana competes at. A national training camp replaced it. As part of this change, summer competitions now offer top scorers the opportunity to bypass the regional championships and move on directly to Sectionals, the competition that determines who qualifies for the national training camp. Ultimately, I reworked the story to reflect this, which raised the stakes for Ana as she prepared to compete at her first summer event.

I didn’t embellish anything about the skating world, but I did omit some details. For example, most skaters represent figure skating clubs. There’s no mention of clubs in Ana on the Edge, but Ana would almost certainly have been a member of one.

Ana’s a fan of Michelle Kwan, Olympic medalist figure skater. I also love Kwan and was obsessed with watching her skate when I was Ana’s age. Why did you want Ana to connect with Kwan and what draws her to Kwan as a role model?

Michelle is the most decorated skater in U.S. history, yet she never won an Olympic gold medal. Despite this, she took what could have been a career-ending setback and continued to compete—and inspire a generation of young skaters. I wanted Ana to connect with Kwan’s perseverance in the face of deep disappointment but put her own spin on it when applied to her personal circumstances.

At one point, Ana thinks about how Kwan told her parents that her coach had signed off on her taking her Senior free-skate test when he actually hadn’t. Kwan qualified for her first Olympics not long after. Ana knows lying isn’t okay, but she convinces herself that not telling her mom how uncomfortable her new princess-themed program makes her feel is necessary because her mom has already spent money on choreography and a dress. In that vein, Kwan is absolutely an inspiration to Ana, but Ana’s solutions for dealing with her problems were all her own.

Ana on the Edge features multiple trans characters and offers insight into the importance of having other trans and LGBTQ+ friends and a community. Why was this important to you in writing Ana’s story?

I grew up in small towns, mostly in the Midwest and South, and didn’t meet another queer person until college. Sometimes you don’t realize it’s okay to be your authentic self until you see your identity reflected in someone else. That was the case for Ana with her new friend, Hayden, even though their experiences with gender identity differ. In addition, Ana’s coach, Alex, is gay, but it wasn’t until she came out as nonbinary that she discovered similarities between his path to living authentically and her own. I wouldn’t be where I am today without the help of allies, both within the LGBTQ+ community and outside of it. I wanted the people in Ana’s life to also reflect this.

Can you talk about Ana’s approach to pronouns, and how she discovers that she/her/hers pronouns work for her right now?

At one point, Ana compares her coming out to choreographing a new skating program. First, you lay out where the jumps and spins will go. Then, you practice it. And if a set of steps doesn’t feel quite right, you can always rework it into something more comfortable once you’re on the ice. Ana feels the same way about pronouns. She’s still at an early stage of discovering her identity, where she knows she’s nonbinary but doesn’t necessarily have every detail worked out. For now, it’s enough that her friends and family know she’s nonbinary. Pronouns are still a work in progress, which she may decide to change later if she decides that another set fits her better.

What other books do you think Ana on the Edge is in conversation with? And do you have any recommendations for published or forthcoming kidlit?

There have been some fantastic stories released in recent years—and also some forthcoming—that Ana’s story might complement. George by Alex Gino and Gracefully Grayson by Ami Polonsky were both early sources of inspiration when I was developing Ana on the Edge, and I hope Ana can stand beside them as an example of another way a person can be trans.

I also think stories that feature secondary trans characters are a great way to introduce readers to trans topics in middle-grade literature. The father in Kit Rosewater’s The Derby Daredevils: Kenzie Kickstarts a Team is a prime example. The same goes for Briana McDonald’s wonderful, forthcoming Pepper’s Rules for Secret Sleuthing, which features a trans secondary character, and Ash Van Otterloo’s sophomore novel, A Touch of Ruckus, which I absolutely can’t wait to get my hands on next year. I also referenced Ana’s Jewish faith in the context of how her religious community might approach her nonbinary identity, and Nicole Melleby’s latest release, In the Role of Brie Hutchens, similarly tackles the intersection of faith and queerness, from a cisgender girl’s perspective.

I’d love it if more people asked me how to support the transgender and nonbinary kids in their lives. Anyone who works with or around kids can extend simple but powerful gestures to make them feel more comfortable or make suggestions to other adult facilitators. One great way to be inclusive, particularly when kids are in a new setting for the first time, is to include your pronouns when you introduce yourself. Pronouns may seem obvious based on your gender presentation, but sometimes a person’s gender identity doesn’t align with their outward appearance. Sharing your pronouns gives kids an opportunity to similarly share who they are—it also signals that you are an ally, a person who cares, even if a child is not ready or is unable to be out or open about that aspect of themselves. 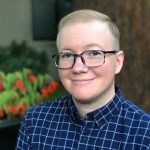 A. J. Sass is a writer, editor, and occasional mentor. A long-time figure skater, he has passed his U.S. Figure Skating Senior Moves in the Field and Free Skate tests, medaled twice at the U.S. Synchronized Skating Championships, and currently dabbles in ice dance. When he’s not exploring the world as much as possible, A. J. lives in the San Francisco Bay Area with his boyfriend and two cats who act like dogs. Ana on the Edge is his first novel.

Previous Post: « The Rise of Gender-Inclusive Pronouns and Language in Literature
Next Post: Cover Reveal and Excerpt of Hani and Ishu’s Guide to Fake Dating by Adiba Jaigirdar »
LAST CALL for WNDB 2023 Internship Grant Partners!