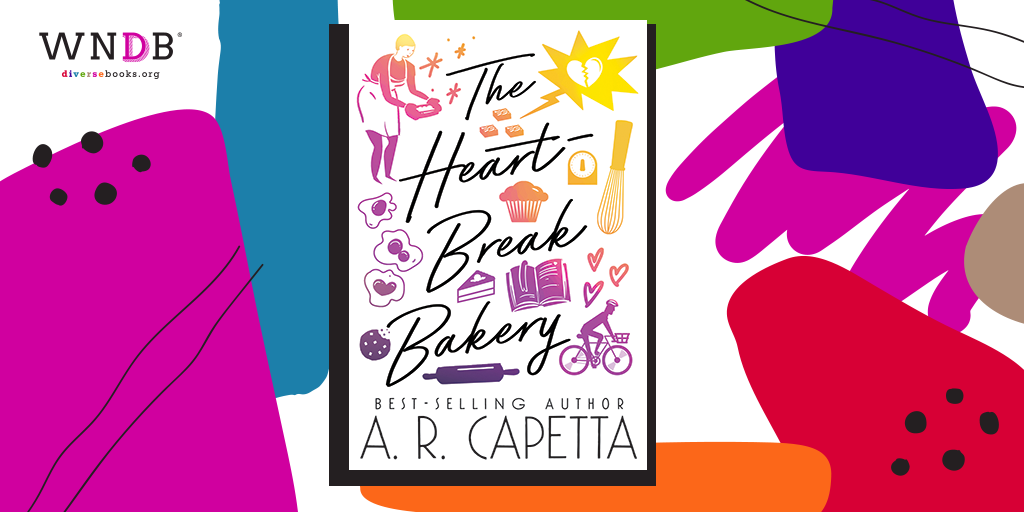 Today we’re pleased to welcome A. R. Capetta to the WNDB blog to discuss The Heartbreak Bakery. 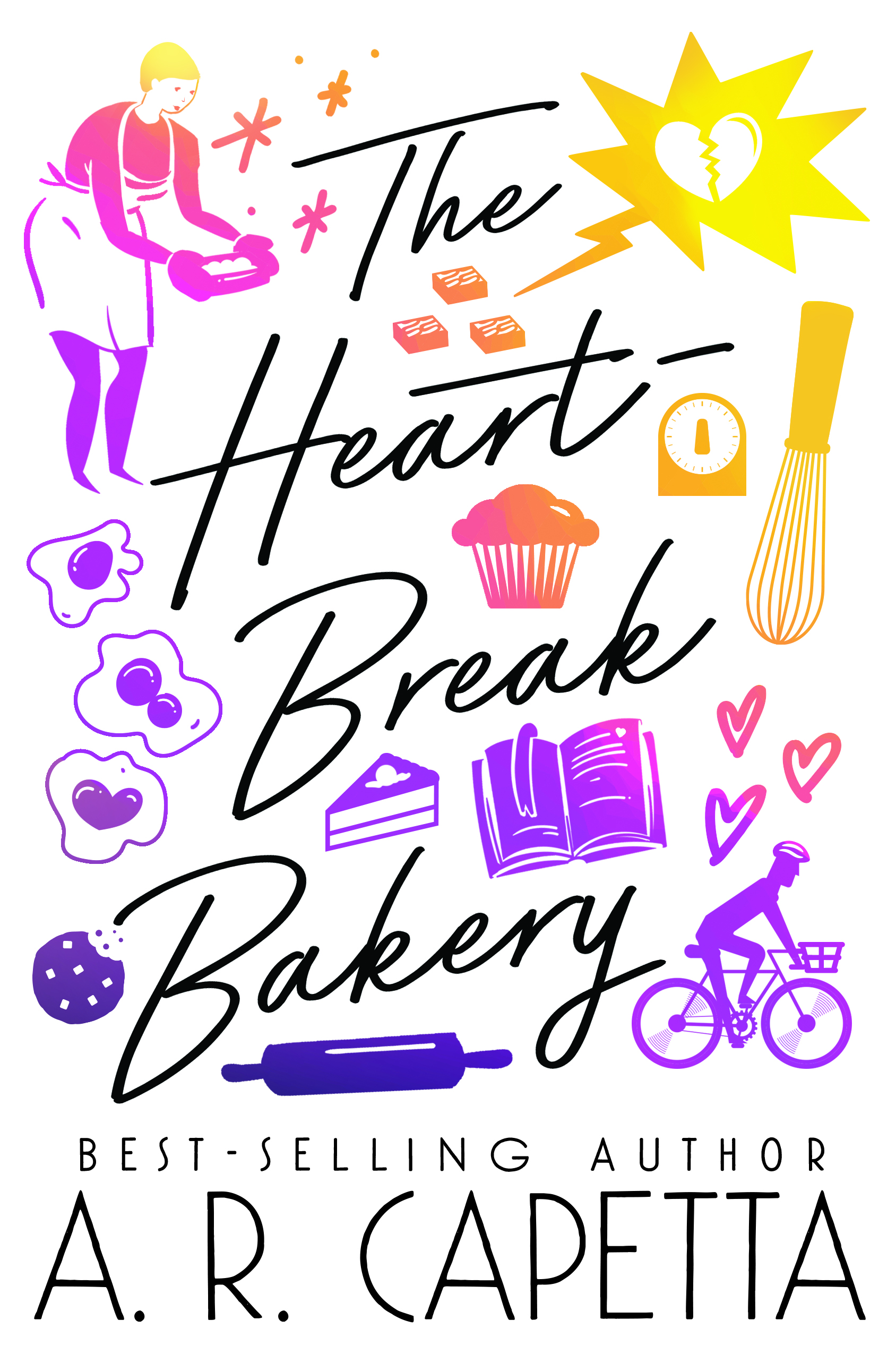 Where did the inspiration behind The Heartbreak Bakery come from?

This was one of those stories that simmers gently on the back of the stove for a long time, waiting for all of the right ingredients to be added, and then for the flavors to really blend together.

The initial inspiration came from my time working as a baker. I was always writing, but not yet an author. I was pretty young and my personal and romantic life was…what’s the gentlest word for a complete mess? But food gave me a way to communicate, to share with people, even when I felt unsure of myself. It made things better in a delicious, tangible way.

Around that time, I found the food memoirs of Ruth Reichl, which made me think about the possibilities of putting recipes into a story. It would take about ten years to find the characters, the setting, and the dash of magic that brought it all together.

The timing was right, though, because now I’m married to my real-life love interest, Cory McCarthy, who gave me lots of day-to-day inspiration. And I was ready to write an agender main character, and I had the chance to do so. Syd is my agender cupcake, and one of the first agender characters in YA. Besides sharing a lot of my gender feelings, Syd is so much like me when I was seventeen. Ambitious, stubborn, food-motivated, and both eager to fall in love and pretty scared of it.

Tell us about your world-building. Austin and the Proud Muffin both feel so real and lived-in. Of course, Austin is a real place, but the stakes felt high as the characters experienced the impact of gentrification and the rising cost of living. How did you create this world and the version of Austin in this book?

When I lived in Austin, these changes were happening already, and (with the exception of the pandemic,) I’ve returned several times a year. Everything keeps shifting so rapidly, and people’s lives keep changing dramatically. But there are a few things at the heart of Austin that make it unique, that persist because people care about them so much. The sense of neighborhood, the music, and art, the food. Plus, Austin is proud of its own weirdness. And that’s no small part of how it embraces queer people and makes space for queer culture.

In an early draft, I started out writing a bakery that wasn’t also an LGBTQ+ community space, and I could feel something was missing. The Proud Muffin is sort of me translating the feeling of safety and welcome that Austin gave to me and sharing it with readers. Without it, the story just didn’t work.

I’ve written a lot of stories with big love in them, but this was the first one that felt like a capital R rom-com my way And rom-coms aren’t just about the main characters falling in love—they’re about what love means, what it looks like, what the possibilities are.

I knew The Heartbreak Bakery had to be full of the expansive possibilities of queer and nonbinary and trans love—which meant lots of relationships, not just a single central one. The idea of Syd’s magical brownies breaking up lots of people helped with that. And so did having this space that both employs and draws in so many folks in the LGBTQIAP+ community.

In shaping the story this way, I realized it was becoming not just a celebration of so many different flavors of love, but also the community and safe spaces that help us to feel brave, to know and seek out what works for us. I’m so glad that the story turned into this specific kind of love letter. 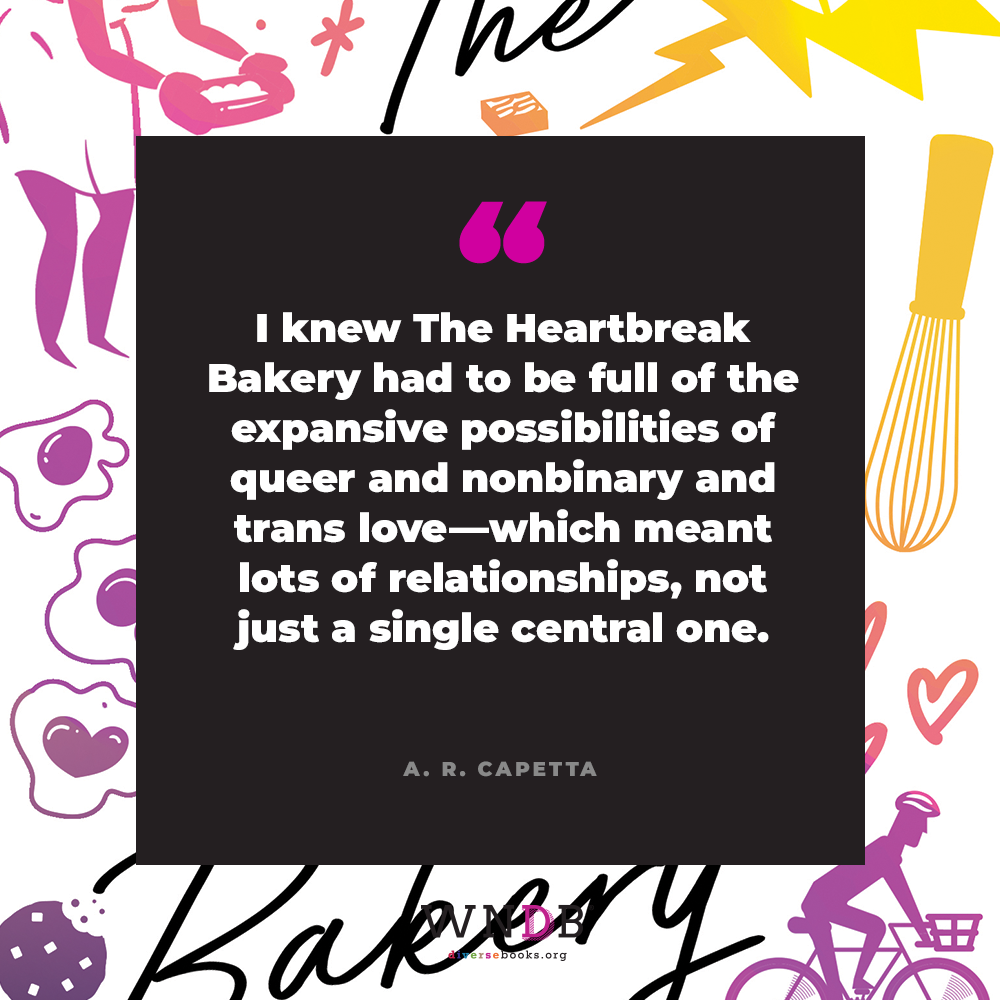 Speaking of identity, I also loved that this book dealt with the issue of constantly having to come out and the fact that so many LGBTQ+ folks are in flux and that “coming out” and figuring out your identity is not a one-time, then-you’re-done situation for many people. Why did you want to explore this theme?

Because I needed it as a teenager, and I still need it now.

The baking aspect of this book was written with so much love and care. I imagine you also love to bake, can you tell us about that? Did you taste test any of Syd’s creations while writing or editing?

I absolutely recipe-tested everything in the book. Many of these are my tried-and-true favorites that I’ve been developing over time, while a few are ones that I specifically chose for the story and had to bake and adjust, bake and adjust. (Yes, bakers revise!)

I only worked as a baker for a little while, but I’ve been a home baker since I could hold a whisk. I liked my job—mostly I liked getting up early and baking and thinking about my stories while everyone else was asleep—but my favorite part is still fiddling with recipes and sharing them with my family, which now includes my chosen family.

If you could have Syd’s baking magic, would you? (If you totally do and you can’t tell, I understand.) What’s the first magic baked good you would make and what would your intentions for it be?

I love love and community and art, and I also think boundaries are magic that help these things flourish, so I would bake something that would help people be better at boundaries—setting them and respecting them. Boundary bundt cake.

At its core, The Heartbreak Bakery is a romance, but it’s also about the mess and complications of so many types of relationships, including romantic partners, polyamorous people, found family, families of origin, and friends. Why was it important to you for Syd and the other characters to explore the not-so-easy, shiny parts of building and maintaining relationships? Why was it necessary for Syd to see that relationships don’t work if you’re unwilling to uncover the uncomfortable parts too?

When I was younger, I didn’t want to get into the messy parts of relationships. I actively tried to avoid them. For some wild reason, I thought that’s what maturity was. But humans are messy and imperfect and that doesn’t make us less worthy of love. There’s a vulnerability to showing the parts of yourself that you’re still figuring out or still working on. I think that’s what I was really trying to avoid.

Love can’t grow or last if it stays shiny-parts only.

There’s a lot of dancing in this book, maybe second to baking. How are dancing and baking similar (and different), and how do you think they work as an expression of relationships and attraction in The Heartbreak Bakery?

When you get into a rhythm in the kitchen, it feels like choreography. Baking and dancing are very physical, they’re very in the moment. Sharing baked goods or a dance forges an immediate closeness. It’s a strong sensation I wanted to tap into for these relationships, definitely.

Baking and dancing feel related to me in another important way—they’re often treated as gendered activities, but when you’re doing them in your own way, they can be extremely freeing and fun and either express gender in a way that feels right to you or have nothing to do with gender whatsoever.

What’s your favorite recipe from The Heartbreak Bakery?

The strawberry peach basil pie is a strong contender!

I’m loving the YA romcoms that have been lighting up my shelves: You Should See Me in a Crown and Rise to the Sun by Leah Johnson, Camp by L. C. Rosen, Don’t Date Rosa Santos by Nina Moreno, Hearts Unbroken by Cynthia Leitich Smith. An adult one with crossover appeal that I just enjoyed is Honey Girl by Morgan Rogers. In graphic lit, I love Mooncakes by Wendy Xu and Suzanne Walker and The Girl from the Sea by Molly Knox Ostertag. On the speculative side of fun/magical/queer, I’m obsessed with Elatsoe by Darcie Little Badger, and Victories Greater Than Death by Charlie Jane Anders.

I wish people would ask about my editor so I can tell them that this book wouldn’t be a book without Miriam Newman. Not only did working with a brilliant in-community editor make me feel I had the space and support to write an agender main character, but I first got to the point where I realized I had the perfect opportunity to tell this story when Miriam sent me homemade revision cookies for our other books and got into an endless email thread with me about frosting…and another one about holiday desserts…

Thank you Miriam, for being as big a baking nerd as I am.

A. R. Capetta is an acclaimed, bestselling author of novels centering magic, mystery, and queerness. Their Italian fantasy series begins with The Brilliant Death and moves to new heights in The Storm of Life. Their latest work is Rebel Robin, a Stranger Things prequel. Once & Future, their co-authored series with Cory McCarthy, was a finalist for the New England Book Award. Other YA titles include Echo After Echo, a Broadway story of love and murder, and The Lost Coast, a witchy mystery. A.R.’s books have been chosen for the ALA Rainbow List, Junior Library Guild Selections, Kirkus Reviews Best Books of the Year, Locus Reading List, and Booklist’s Top 10 SF/Fantasy and Horror for Youth. A.R. teaches in the MFA program for Writing for Children and Young Adults at VCFA and lives in Vermont with their spouse, Cory McCarthy.
******Alaina (Lavoie) is the communications manager of We Need Diverse Books. She also teaches in the graduate department of Writing, Literature, and Publishing at Emerson College and is a book reviewer for Booklist. She received a 2017 Bookbuilders of Boston scholarship for her work in the publishing industry. Her writing has been published in New York Times, Teen Vogue, Cosmopolitan, Refinery29, Allure, Healthline, Glamour, The Oprah Magazine, and more. She currently lives in Boston with her wife and their two literary cats. Follow her @AlainasKeys on Instagram and Twitter.

Previous Post: « Q&A With Nina Moreno, Our Way Back to Always
Next Post: Q&A With June CL Tan, Jade Fire Gold »
We're thrilled to reveal the cover for TOKYO NIGHT