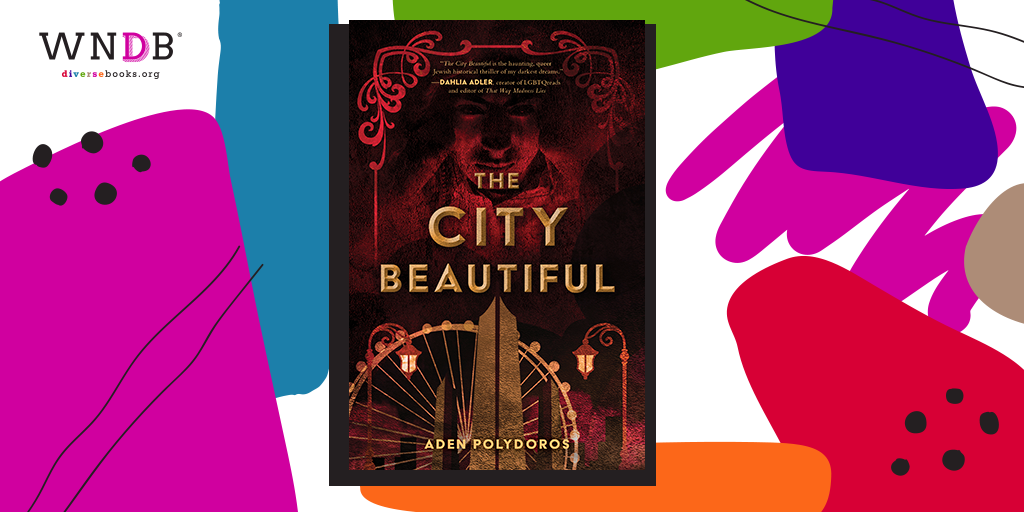 Today we’re pleased to welcome Aden Polydoros to the WNDB blog to discuss The City Beautiful. 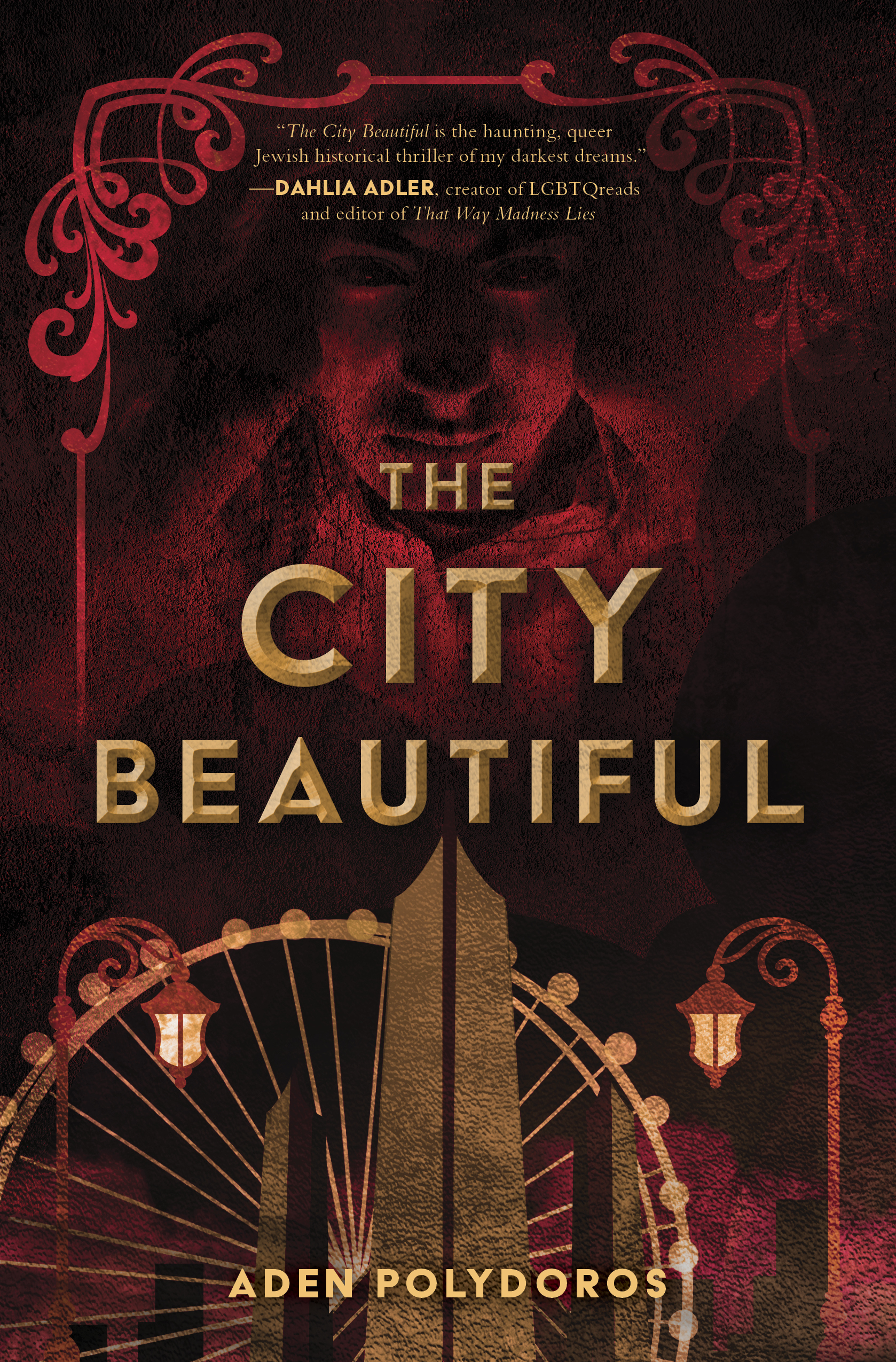 What was the writing process like for The City Beautiful? What was the hardest part about writing this difficult story, and did anything surprise you?

During the drafting process, I essentially rewrote the story several times over. My first revision involved changing the second half of the book entirely, and over the 6+ revisions I did, I likely deleted 150,000 words, if not more. I would say that the hardest part of working on this book was trying to balance the supernatural elements with the murder mystery aspect of the plot. I didn’t want one to overshadow the other.

In the author’s note, you write about the inspiration behind the themes of immigration and antisemitism as well as the murder mystery plot point for The City Beautiful, but what about the fantasy element? Why was this story meant to be a historical fantasy specifically and not historical fiction?

When I began writing this book, the element of the dybbuk did not come to me fully formed. It was my first time writing a ghost story, and I wanted to distinguish it from the possessions that I had seen and read about in books and other forms of media. From the possession scene itself to the manifestations of the haunting, I wanted the writing to be unique.

Over the course of the story, I realized that Alter wasn’t just haunted by the dybbuk, but also by grief and survivor’s guilt, and in the process, the possession itself became, in my mind, an allegory for that loss. I feel like it is that grief that ultimately binds Alter and Yakov to each other, and that in carrying the possession through to the end, Alter eventually comes to terms with that grief and heals from it.

It did occur to me more than once while working on this story that I could simply remove the supernatural elements and focus solely on the mystery/thriller aspects, but I feel like in doing so, I would lose that through-line—that this is a story about carrying the past with you, and the pain that comes with it.

The setting in this story, including the language, clothing, architecture, and food, was portrayed so vividly and beautifully, which made the atmosphere feel extremely authentic. What research did you do for this book to make sure the reader was immersed in Alter’s Yiddish-speaking world of The City Beautiful?

Although research is one of the most difficult parts of writing a historical novel, I found it to be quite enjoyable in this case. I knew about burial societies from visiting the old chevra kadisha building in Prague, but I didn’t realize the amount of ritual surrounding the whole burial process, so my initial research involved reading guides on the burial process and the beliefs surrounding the internment of the dead in Judaism. Since I wanted Alter to volunteer at such a society, I felt that it would be better to make him observant, which was a challenge of its own, as I grew up in a secular, interfaith family. It was very important to me to get the details right regarding his level of observance and day-to-day life, so I made sure to seek out the help of critique partners who were able to provide sensitivity reads.

As far as research involving the setting and atmosphere, I relied largely on contemporary sources like news articles and guidebooks. The portrayals of the White Chapel Club and various buildings at the World’s Fair were based on accounts written during that time. I also read novels published after the fact, like The Devil in the White City and The Jungle.

I think one of the most enjoyable aspects of my research was how after I started cobbling together the plot, I discovered ways to interlace events that were occurring during that time. The book is set between the Fourth of July and an actual disaster that occurred in the World’s Fair, and since such a short period of time passed between those two dates, I had to find a way to make the story fit. It was also very fun to reference locations like Maxwell Street and the Whitechapel Club, both of which were contemporary to the setting, as well as touch upon other historical events, like the attempted assassination of Henry Frick and the record-breaking horse race at the American Derby.

Without giving too much away, what were some of your favorite scenes and/or lines to write in The City Beautiful?

My favorite scenes to write would have to be the moments in the novel where the dybbuk begins to take over and Yakov’s memories seep into Alter’s reality. It was fun to write more surreal, fantastical scenes where I could really explore my use of language and description.

If you were living in late 19th century Chicago, what would your job be? Would you be a typesetter and journalist like Alter, a con artist and thief like Frankie, a reporter and anarchist like Raizel, or something else entirely?

I like to think that I would have Frankie’s shameless ambition or Raizel’s determination, but I imagine that I would probably end up working the presses like Alter. I’m not cut out to be a thief, haha.

It’s not a spoiler that there is a queer romance in The City Beautiful—how did you weave Alter’s identity into a story that takes place in a time and community where anything other than heteronormativity was not tolerated?

I wrote this novel as part of an independent study in the senior year of my undergrad, and my professor compelled me to dive deeper into how Alter might interpret his own sexuality. My professor raised a very interesting point—that back then, homosexuality wasn’t viewed as an actual sexual orientation the way it is today. I realized then that Alter might not necessarily have the words to describe his same-sex attraction, and that all feelings he had concerning his queerness would be shaped by his society and religion.

One thing I kept in mind while working on the story is that Judaism does not view thoughts as sins in need of repentance. There is only one time in the book where Alter uses the word “sin,” and that’s during the moment when his desires become action. But even then, I don’t leave that declaration unchallenged and have Frankie use his own (more educated) knowledge of the Hebrew language to counter Alter’s interpretation of Leviticus.

What is the main thing you want readers to take away from your book?

Most people aren’t aware that Jews faced persecution prior to the Holocaust. The violent pogroms that spread through the Russian Empire in the late 1800s (and early 1900s) were never discussed in my history classes, even though those events were the driving forces behind the large-scale immigration of Jews to the United States. Although the events in this book are fictionalized, I hope that readers might become more aware of how the Holocaust was not a freak accident—it was the result of centuries of antisemitism.

There is a pretty lengthy glossary at the back of the book — what was your thought process like for deciding how much context to give to the Yiddish/Hebrew words and Jewish traditions in the text itself and what to leave for the backmatter?

As a reader whose mother tongue is English, there have been numerous times where I’ve come across English words whose meanings I don’t know, but that I can usually suss out from the subtext. This does not affect my enjoyment of the book, and it doesn’t make me stop reading. The way I approached the use of Yiddish, Hebrew, and the occasional Russian in The City Beautiful was that I would try to explain the meaning of the words through the text, but that I would do it in as natural a way as possible. So I didn’t spend too much time defining these words for readers, which would be at odds with Alter’s point-of-view. 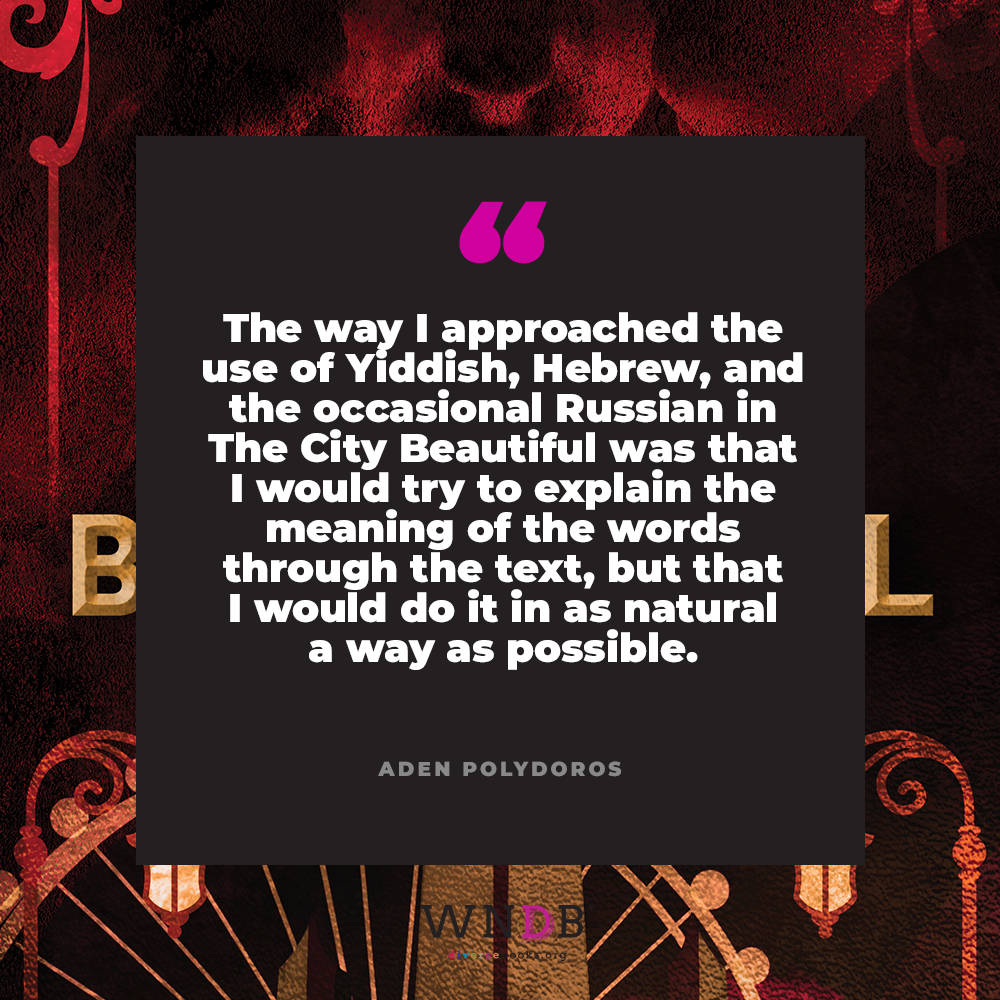 Do you think about your characters after the story ends and what do you hope Alter and Frankie have in store for their future?

Definitely! It’s always hard for me to let go of characters, especially when I’ve been working on their story for so long. To avoid spoilers, I’m going to be a bit vague here, but I like to imagine that Alter and Frankie continue their new business venture, and maybe even solve some other mysteries along the way. I think it would be fun to write a sequel exploring that.

Which books do you think The City Beautiful is in conversation with? And do you have any recommendations for recently published or forthcoming YA books?

I’d say that by focusing on the lives of queer Jewish immigrants, The City Beautiful is not so much in conversation with, but in argument with historical fiction books that present a very sanitized, heteronormative portrayal of the Victorian era.

As for recommendations, I have plenty! Recent books I have greatly enjoyed are Down Comes the Night, The Witch King, Sweet & Bitter Magic, and Can’t Take That Away.

Forthcoming 2022 books I’ve had the fortune to read (and LOVE!) are A Far Wilder Magic, The Ghosts of Rose Hill, and Hell Followed With Us.

Is there anything else you want to share that I didn’t ask about?

If readers enjoy The City Beautiful, they will probably also like my next book coming out in Fall 2022, Bone Weaver. Although it’s a secondary world gothic fantasy, the setting is loosely modeled after c1910s Imperial Russia, and it deals with some of the same themes explored in The City Beautiful. It also has necromancy, Slavic folklore, a bisexual love interest, and sewing magic. If I had to sum the plot up in one sentence, it would be: When a girl raised by the undead finds a dying boy in a ruined airship, she’s dragged into a civil war between insurgents and magic-endowed tsarists.

Aden Polydoros grew up in Illinois and Arizona, and has a bachelor’s degree in English from Northern Arizona University. When he isn’t writing, he enjoys going to antique fairs and flea markets. He can be found on Twitter at @AdenPolydoros.

Aleah Gornbein currently works in publicity at Holiday House, the first American publisher founded with the intent of only publishing children’s books. She liked school so much she went back to get a Masters’s in Publishing a year after graduating college. As someone who has yet to read a story with all of her identities represented, her goal is to help put diverse books into the hands of kids. You can find her shouting about books on TikTok and Twitter (@bookworm613) or at Books of Wonder events sitting in the back row (when we’re not in a pandemic).

Previous Post: « Q&A With Saadia Faruqi, Yusuf Azeem Is Not A Hero
Next Post: My Two Border Towns Is About the Duality of Life on the Border »
The #BooksSaveLives auction is now OPEN! Thanks to