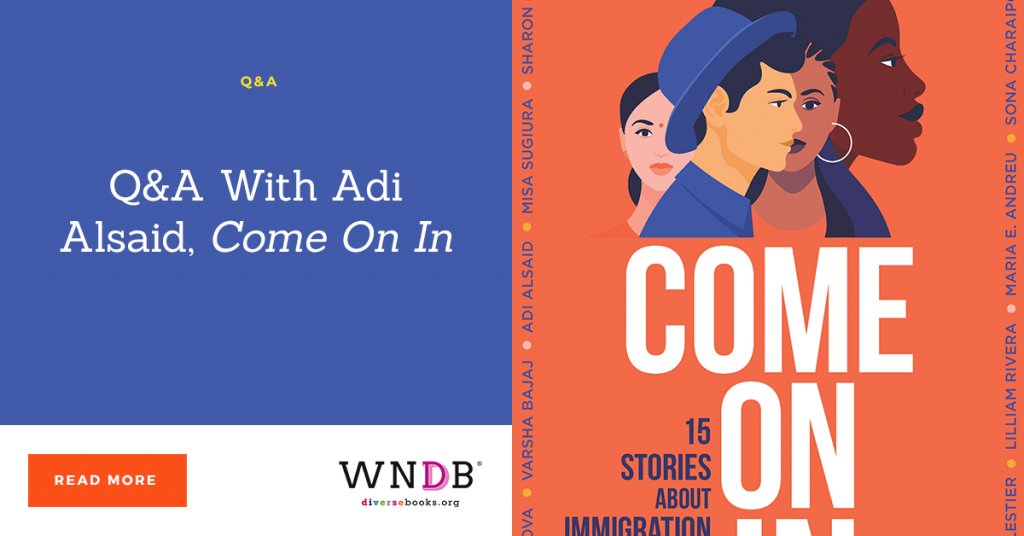 Today we’re pleased to welcome Adi Alsaid to the WNDB blog to discuss his YA anthology Come On In: 15 Stories About Immigration and Finding Home, out October 13, 2020!

From some of the most exciting bestselling and up-and-coming YA authors writing today…journey from Ecuador to New York City and Argentina to Utah, from Australia to Harlem and India to New Jersey, from Fiji, America, Mexico and more… Come On In.

With characters who face random traffic stops, TSA detention, customs anxiety, and the daunting and inspiring journey to new lands, who camp with their extended families, dance at weddings, keep diaries, teach ESL, give up their rooms for displaced family, decide their own answer to the question “where are you from?” and so much more, Come On In illuminates fifteen of the myriad facets of the immigrant experience. 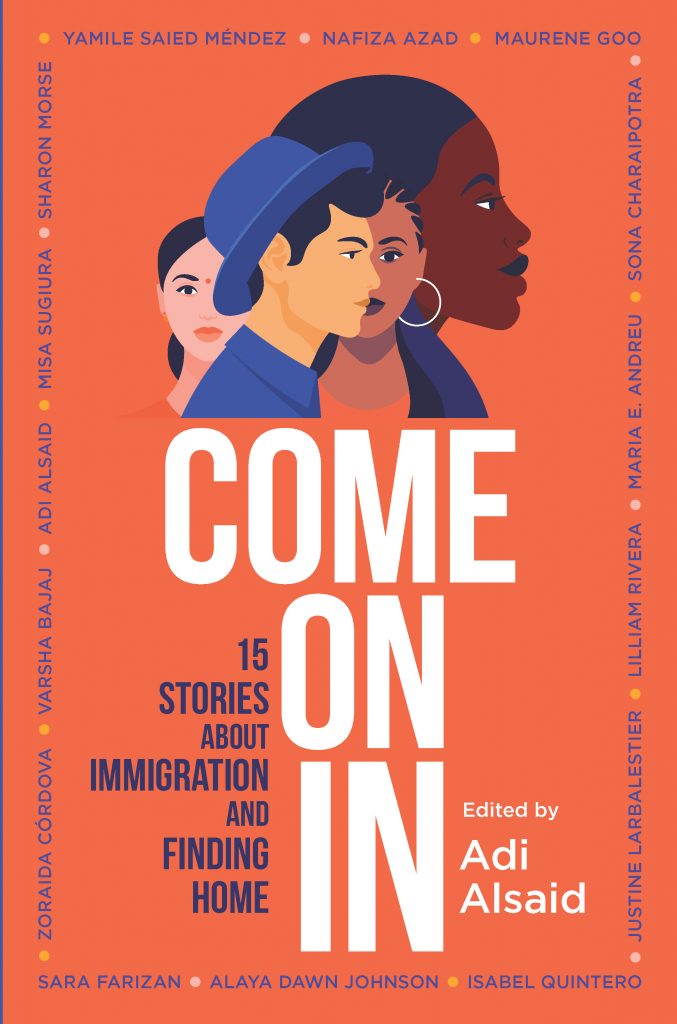 Where did the inspiration initially come from for this anthology?

It first came from me noticing the uptick in YA anthologies, and being very excited about it. My first foray into writing was via the short story, and I started getting passionate about editing my own anthology and adding even more stories to the YA world. At first, I flirted with the idea of a travel anthology since that’s a love of mine. But I wanted it to be a little meatier than that, maybe even more personal. I come from a family with a history of immigration, and since the conversation with my agent about pursuing the anthology was happening in the recent US administration, right before my plan to immigrate to the US, it didn’t take long for that to emerge as the central theme.

From the range of stories in Come On In, it’s clear that you were intentional in representing diverse immigrant and immigration experiences. Why did you feel this was important?

The simple answer is that Americans are often surprised at my background. I’m a blonde-ish white-looking guy who speaks English with a perfect American accent, and when I present my Mexican passport as ID at a bar, and people see my Arabic-sounding last name, and they learn I’m Jewish, and they become confused and surprised. They’re used to one kind of Mexican immigrant, or one kind of immigrant with an Arabic-sounding name. It’s clear to me that Americans could benefit from hearing more stories from immigrants, from backgrounds they think they’re familiar with and those they’ve never heard a single story from.

How did you choose the authors for this anthology? Did you have any specific themes in mind for their stories or did you allow them to choose what to write about on their own?

I cast a fairly wide net during my initial search. Mostly because I wanted to give as many writers from immigrant or second-generation backgrounds a chance to contribute. I let them pick their own topics and themes, and I think naturally most of the writers leaned toward writing about characters with their backgrounds, perhaps pointing to the hunger for “mirror” stories. The one thing I wanted to make sure the anthology accomplished was a variety of backgrounds and voices, and I think this group wonderfully accomplished that.

Why did you decide on a young adult anthology? What about this age group felt like the right audience for these stories?

I’m a strong believer that kids deserve to see themselves in stories. I’m happy to see the increase in representation in the YA book world for immigrant and second-generation kids in recent years, but I want them to have more.

Were there aspects of the immigrant experience that are not usually portrayed in media that you wanted this anthology to highlight?

There are so many, that this anthology can’t cover them all. One big example is Nafiza Azad’s wonderful story about saying goodbye to home. There are few stories about how difficult that can really be, even if it’s not an immediate fleeing from violence. I wanted more stories that highlight microaggressions that immigrants and children of immigrants face. I’m thrilled we got a story from Alaya Dawn Johnson about an American moving to Mexico and a historic glance at immigration with Justine Larbalestier’s story. In my personal contribution, I also wanted to examine the different ways the world treats immigrants who flee versus those who are privileged enough to merely “move” to a new country.

What are some of the best parts of working on an anthology and what are the benefits for readers of short story collections?

I really enjoyed the editorial role. Usually, when I’m editing, I’m only editing myself, and that’s often me either being overwhelmingly critical of myself or frustrated that I don’t know how to fix what I want to fix. I found it challenging and rewarding to help the contributors achieve their vision, and get the story to be the best version of itself (as opposed to what I would do if I had written the story). I love how the different pieces come together to speak to a whole theme, how all these different voices help add to the reader’s understanding of the immigrant experience. Or rather, the immigrant experiences, since it is not a singular story, it’s a collection.

What other anthologies or YA novels do you think Come On In is in conversation with? Do you have any recommendations for kidlit books that are published or upcoming?

I was lucky enough to contribute to Hungry Hearts, an anthology that is wonderful not just because it’s all about food and I love food, but in the wonderfully diverse makeup of its authors. It’s A Whole Spiel, Black Enough, and the two Kelly Jensen-edited anthologies ((Don’t) Call Me Crazy, and Here We Are) are ones that come to mind as well.

What is one question do you wish you were asked more often (and the answer)?

And my somewhat boast-y answer: I had been thinking for days about the braised short ribs that Antoni from Queer Eye makes in Season 5 of the show. So I did some googling, found a recipe, and made the dish along with some really good mac and cheese, as well as a watermelon and feta salad. 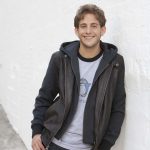 Adi Alsaid was born and raised in Mexico City. He attended college at the University of Nevada, Las Vegas. He’s now back in Mexico City, where he writes, coaches basketball, and makes every dish he eats as spicy as possible. In addition to Mexico, he’s lived in Tel Aviv, Las Vegas and Monterey, California. His books include Let’s Get Lost, Never Always Sometimes, We Didn’t Ask for This and North of Happy. Visit Adi online at www.SomewhereOverTheSun.com, or on Twitter: @AdiAlsaid.