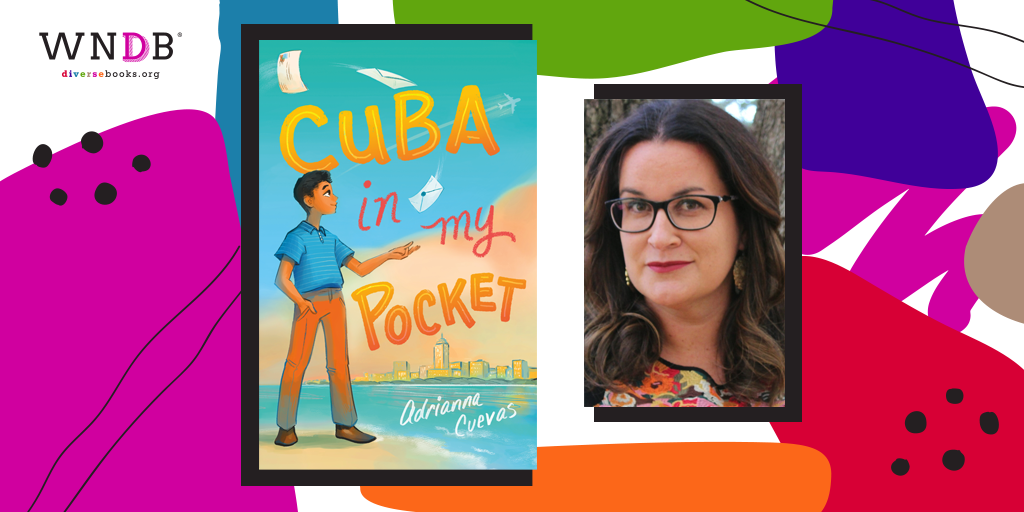 Today we’re pleased to welcome Adrianna Cuevas to the blog to discuss Cuba in My Pocket, out yesterday! Read the personal essay Adrianna previously wrote for us, “Stories Are How I Preserve My Family’s History,” here. 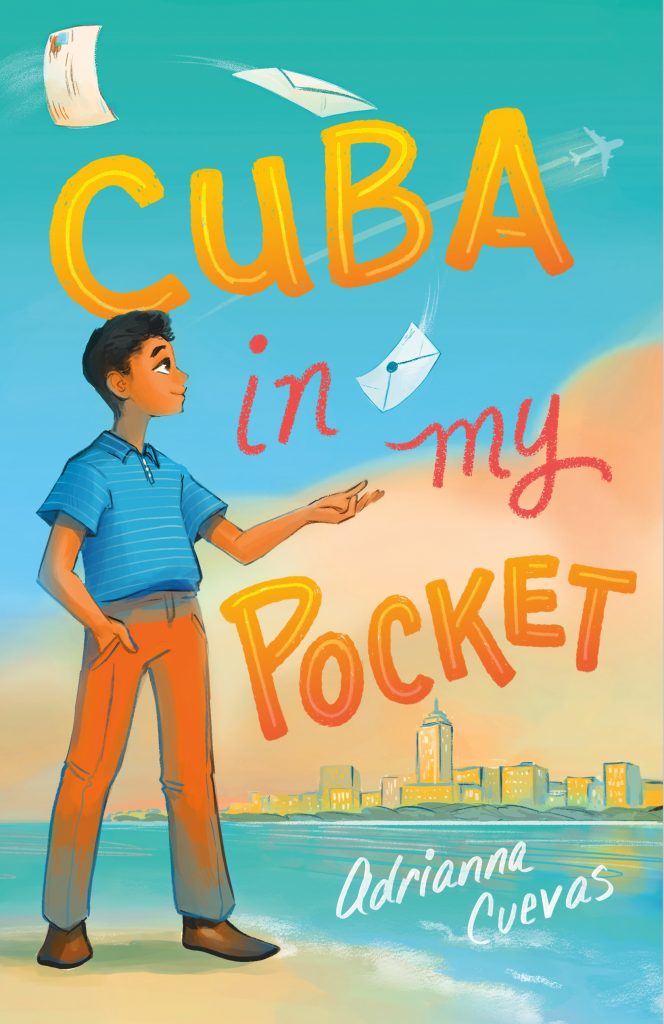 First of all, thank you for speaking with us! This book is so moving, and I found it especially so with the knowledge that your father’s life inspired the story. One of the things that particularly struck me was how many people show Cumba kindness as he adjusts to life in the US. Were any of those instances inspired by or drawn from real-life anecdotes?

Some of the scenes in Cuba in My Pocket were definitely inspired by real-life people who took care of my father and showed him compassion. Tía Benita was inspired by my dad’s relative, Norca Feijoo, who gave him a home when he first came to the US. He was able to see her again much later in life when he attended her 90th birthday party in San Antonio. He also reunited with the foster family who took care of him in Key Largo, Floyd and Melissa Russell.

While these characters were based on real people, I also used Cuba in My Pocket to give my father the people I hoped he had in his life during this critical time. I hoped he had a friend to make him feel less anxious, so I created the character of Arnold who Cumba meets when first attending school in the US. I hoped he had older sibling figures in his life to guide him since he was so far away from family, so I wrote Alejandro and Valeria to act as a big brother and sister for him. And while my father only reunited with his quartet of Cuban friends much later in life in the US, I couldn’t help but put one of those friends with him in the scenes that take place in Key Largo. It was my way of telling those characters, and by extension my father and those who had immigrated to the US like him, that hope and happiness were on the horizon.

I’m so glad to hear you were able to share the full manuscript with your father before he passed away. Was there any section or chapter that particularly resonated with him?

The chapters taking place in Cuba were especially meaningful to him. My father was never able to return to the country of his birth so being able to again see what his life was like there—the family members, the friends, the traditions- was an emotional experience. It meant a lot to him to be able to tell me about relatives and friends I never met who played an important part in his life when he was growing up in Cuba.

But I think the whole book was something he considered special. He’d often tell me in awe that he couldn’t believe I was writing his story. He felt he was just an ordinary person with an ordinary life, nothing worthy of a book. He’d say, “How many people get a book about their life?” Telling this story allowed my father to understand how I always perceived him—not simply as ‘Dad,’ but as my hero.

It feels like this book is a real labor of love, as well as a project that requires a great deal of research. Is there any individual part of it that you’re proudest of writing?

Honestly, this book is a huge step outside my comfort zone of contemporary fantasy, sarcasm, and general nonsense. So the fact I was able to accurately portray Cuba and Miami in the 1960s as well as convey the historical context of the post-Bay of Pigs immigration wave without adding talking animals or copious amounts of bathroom humor is a personal triumph. But there are simply some stories that authors have to tell, that won’t let go of our brains and our hearts until they’re on the page. And this was certainly one of those stories for me.

Completing the required research for this book also helped me see members of my family in a new light. After hearing my dad’s stories, my abuelo and abuela weren’t simply the talented musician and expert seamstress I had known in my childhood, they were fighters filled with a bravery I had never imagined. My tío wasn’t just the tech-savvy icon whose job I never quite understood, he was a rambunctious little boy who liked to dress up like American cowboys. Their lives and personas became more complete after I undertook the research for this story.

So while I can’t pinpoint a single part of this book I’m proudest of, this entire story fills me with a love for my family and our history. It’s certainly a story I’m honored to tell.

You’ve mentioned that you hope readers come away with a craving for Cuban food after reading — you certainly succeeded, in my opinion! Which Cuban dishes evoke the most nostalgia for you?

Any dish that was served at my family’s nochebuena (Christmas Eve) celebration growing up sends me back to my childhood immediately. Ropa vieja, picadillo, yuca con mojo, plátanos maduros, frijoles negros… my mouth not only waters just thinking about them, but I can see my abuela and Tía Cuca in the kitchen arguing over the best way to serve flan. I can hear how noisy my house was as everyone talked in multiple languages way louder than necessary—the Cuban way. And eating leftover pastelitos on Christmas morning remains one of my favorite traditions ever.

When you come from an immigrant family that has had to leave everything behind, you cling to the elements of your culture and family history that are intangible—language, recipes, and stories. This is why all of my books, regardless of plot, tend to incorporate these elements since it’s my way of preserving my culture. 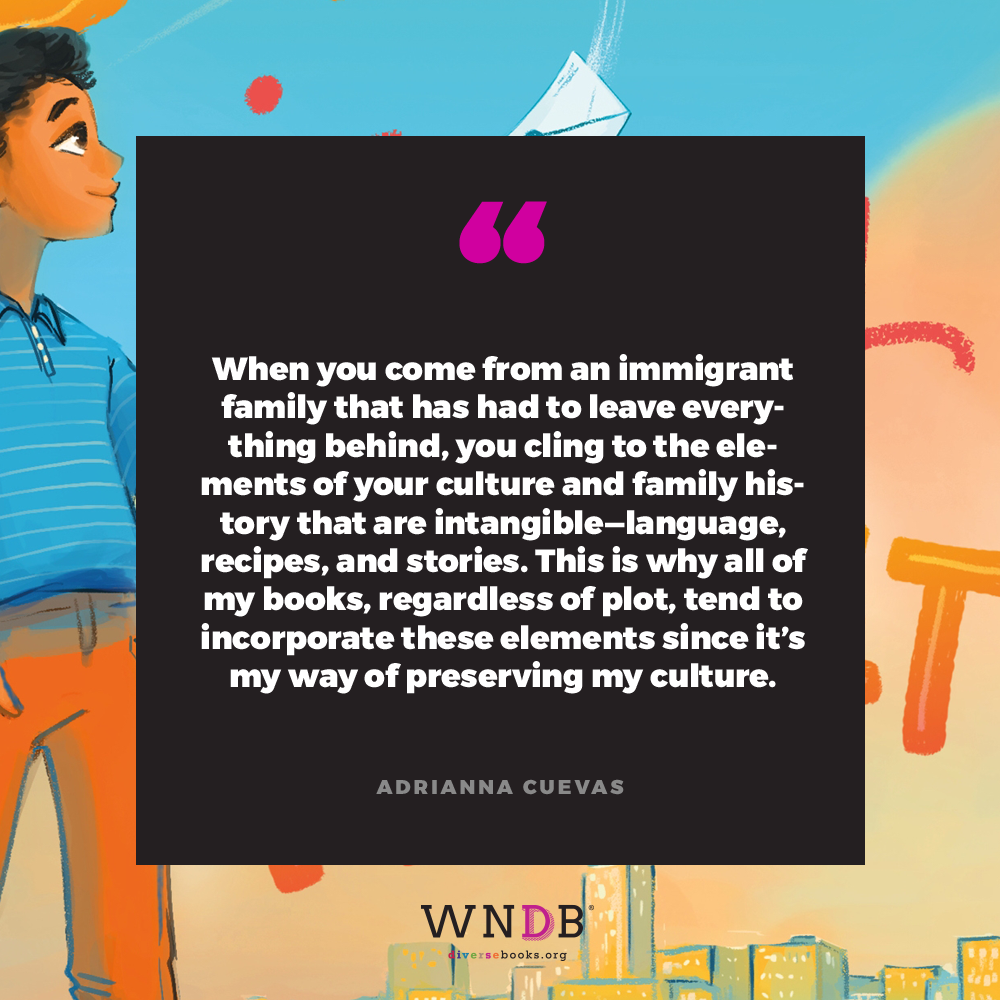 Before you were an author, you were an educator. Do you have any advice for educators who want to teach using more diverse books and viewpoints, but are currently grappling with new laws or administrators who oppose working any anti-racism into the curriculum?

I once worked in a district where the English teachers felt they had a diverse reading list because they had one book involving slavery and another about a child crossing the Mexico-US border on their list of more than twenty books for eighth grade. So I understand how hard it is to change perceptions and opinions that have permeated a school’s curriculum.

If a district has made the ignorant choice to limit diverse perspectives, I would encourage educators to turn to their classroom library instead of only the books outlined in the curriculum. Booktalk the anti-racist stories you want kids to be excited about. Students feed off of educator enthusiasm. If you’re excited about a story, kids tend to be as well. Hopefully by doing this, students from marginalized identities who feel their very existence has been politicized by district decisions would be seen. Their perspectives would be valued as their humanity is honored.

And know that authors from marginalized backgrounds stand ready to support you in any way we can. Oftentimes, education decisions are made without considering the input of experts—actual teachers in classrooms. When their voices go unheard, it is important for community members and society at large to speak up.

You’ve also mentioned that you loved teaching middle schoolers most, and that you were a Spanish and ESL teacher. What do you wish more people knew or appreciated about kids learning English as a second language?

Apart from telling my father’s story, I used Cuba in My Pocket to illuminate the experiences of the many students from linguistically and culturally diverse backgrounds that I worked with during my teaching career. Oftentimes, these students are propped up as ambassadors for entire cultures and countries, expected to know all the nuances and histories of their birthplace. In reality, they’re messy adolescents dealing with a tornado of feelings… they’re just doing it in multiple languages. I also tried to highlight the fact that language learning doesn’t involve a simple a=b equation. There is so much more that can affect a student’s acquisition that people need to be mindful of. And rather than view limited English ability as a hurdle that needs to be overcome, we need to recognize the incredible skill that multilingualism actually is.

Overall, adults have a tendency to place kids in categories or boxes. Adolescent English language learners are no different. It’s important to view each student as an individual with unique experiences and emotions. In a word, human!

Which books do you think Cuba in My Pocket are in conversation with? Where do you think readers should turn after they read your book?

Cuba in My Pocket would pair fantastically with The Barefoot Dreams of Petra Luna by Alda Dobbs, Unsettled by Reem Faruqi, and Finding Junie Kim by Ellen Oh. Using this quartet of books together would give students a glimpse into the immigration experiences of varying cultures across different time periods. Also, similar to Cuba in My Pocket, each of these authors drew from family history to write their books. This would offer students an opportunity to explore the concept of using personal source material when telling stories. But most importantly, these are phenomenal books that kids will love! 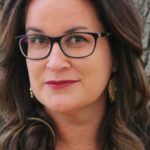 Adrianna Cuevas is the author of The Total Eclipse of Nestor Lopez (FSG BYR, 2020). She is a first-generation Cuban-American originally from Miami, Florida. After teaching Spanish and ESOL for sixteen years, she decided to pursue her passion for storytelling. Adrianna currently resides outside of Austin, TX with her husband and son where they enjoy hiking, traveling, and cooking lots of Cuban food. adriannacuevas.com 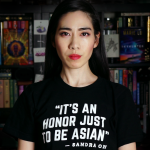 Previous Post: « Samira Ahmed Honors Fantastical Oral Storytelling With Chicago Flair and Siblings at the Center
Next Post: You Do Not Have to Explain Your Magic »
Applications are open for Literary Agents of Chang