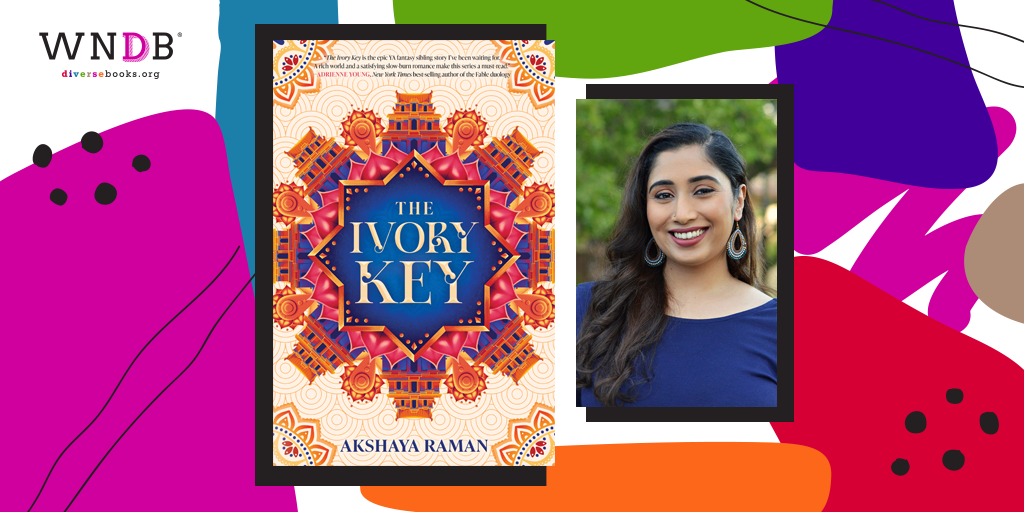 Today we’re pleased to invite Akshaya Raman to the WNDB blog to discuss her book The Ivory Key, out January 4, 2022!

In this epic YA fantasy debut, magic, a prized resource, is the only thing between peace and war. When magic runs out, four estranged royal siblings must find a new source before their country is swallowed by invading forces. The first in an Indian-inspired duology that’s perfect for fans of There Will Come a Darkness, The Gilded Wolves, and We Hunt the Flame.

Vira, Ronak, Kaleb, and Riya may be siblings, but they’ve never been close or even liked each other that much. Torn apart by the different paths their lives have taken, only one thing can bring them back together: the search for the Ivory Key, a thing of legend that will lead the way to a new source of magic. Magic is Ashoka’s biggest export and the only thing standing between them and war with the neighboring kingdoms—as long as their enemies don’t find out that the magic mines are nearly depleted.

The siblings all have something to gain from finding the Ivory Key, and even more to lose if they don’t. For Vira, the Ivory Key is the only way to live up to the legacy of her mother, the beloved former maharani. Ronak plans to get out of his impending political marriage by selling the Ivory Key to the highest bidder. Kaleb has been falsely accused of assassinating the former maharani, and this is the only way to clear his name. And Riya needs to prove her loyalty to the Ravens, the group of rebels that wants to take control away from the maharani and give it to the people. With each sibling harboring secrets and conflicting agendas, figuring out a way to work together may be the most difficult task of all. And in a quest this dangerous, working together is the only way to survive.

At its heart, The Ivory Key is about the bond between four siblings whose strength is tested throughout their journey. Why did you want to portray this relationship?

I’ve always been fascinated by stories that touch on complex family relationships and the complicated notion of legacy. Our upbringings are inherently shaped by the worldviews of those who raised us, and I wanted to explore how the generations that came before affected these four siblings differently as they grapple with these big ideas of truth, justice, and legacy set against the backdrop of a fantasy adventure.

Are Ashoka and Lyria inspired by any historical regimes? What kind of research did you conduct?

Ashoka is inspired by ancient India and Lyria by the ancient Greek and Roman empires, but I didn’t base either of them solely off any specific time period or regime. I roughly stuck to the technology of the 17th and early 18th centuries, but I also drew inspiration from earlier time periods especially when it came to architecture.

Some of my favorite things to research included flora and fauna native to India, the history and construction of forts and temples, and regional food and textiles. A lot of this was done online but some of it was also calling my family in India and asking specific questions that they very kindly and patiently answered!

What was the hardest part about crafting the world featured in The Ivory Key?

The hardest part of worldbuilding by far was the magic system. I knew before I started writing that I wanted magic to be a physical resource, but figuring out what that would look like and what kind of effect it would have on other aspects of the world was challenging and took a lot of time to nail down.

Whom do you identify with the most out of the four siblings?

I put elements of myself into all four of them, so it’s hard for me to just pick one I’m most like! I relate a lot to Vira’s anxieties, to Ronak’s protectiveness, Riya’s idealism, and Kaleb’s hope. But in terms of who was easiest to write, that was probably Kaleb or Vira.

The concept of a quest to find “treasure” or an object supposed to bring good fortune is popular in YA novels. How did you reclaim the trope as your own and fit it into The Ivory Key?

I actually didn’t think of this book as a treasure hunt until after I’d already written it. I was most interested in exploring the idea of magic being a tangible resource, and so when I thought about what it meant to lose something like that, I knew it would have to involve a quest somehow to get it back. I drew on a lot of my favorite treasure hunt stories from my childhood for inspiration, but I loved getting to infuse those tropes with Indian history and culture.

Do you think the quest was the only way to have the siblings physically be together again, or do you think they would have found their way together in the long run?

The thing that ultimately brings them together is confronting their shared family history (and the quest is just one aspect of that) so I’d like to think they would eventually find their way back together regardless! 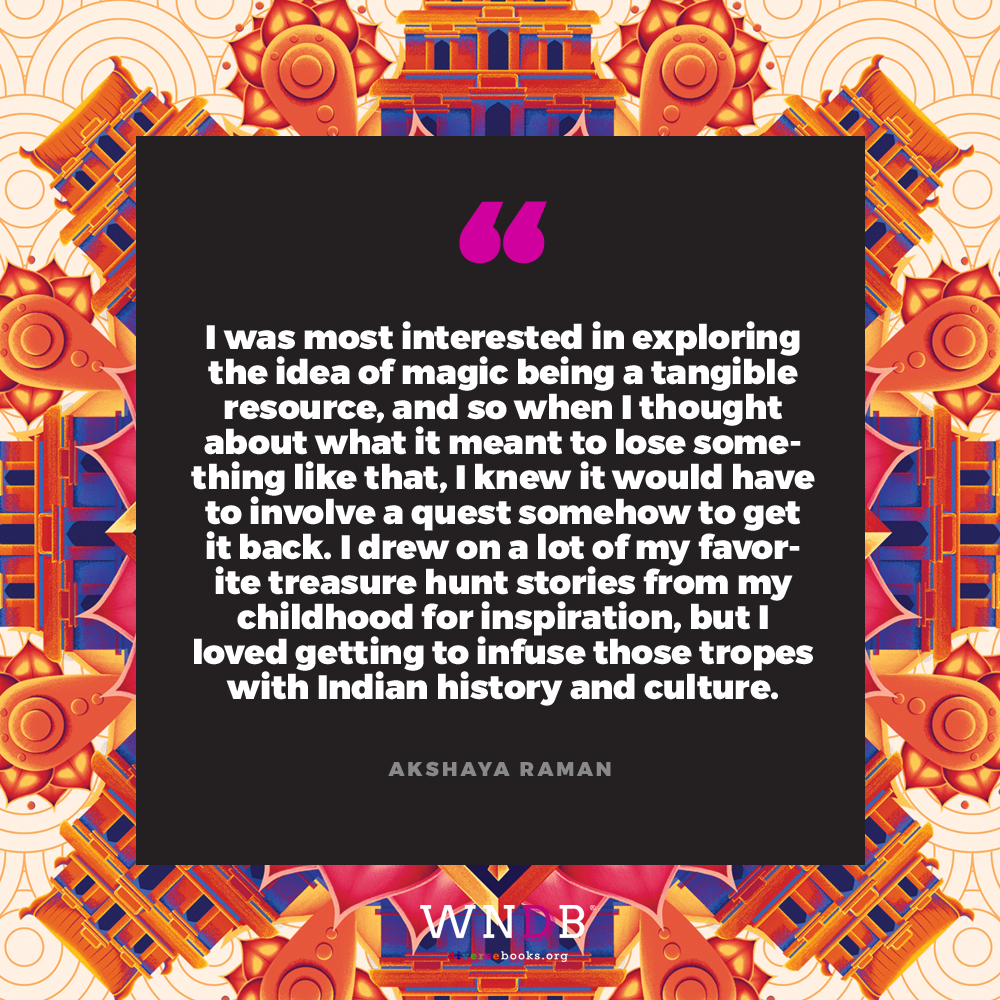 You describe Ashoka’s cuisine in rich, mouth-watering detail. If you were to describe each of the siblings’ personalities with one of those dishes, what would they be? In addition, what are some of your favorites described in The Ivory Key?

This is such a fun question! Vira has hard and soft, sweet and sour sides to her, so I’d say she’s reminiscent of the complex flavors of pani puri. Kaleb is sweet but has a slight bite, so I could see his personality being similar to dhokla or khandvi. Ronak is the most stubborn and prickly, so he reminds me of savory snacks like murruku and thattai. Riya is hard to get to know but very loyal once you do know her, which makes me think of a lot of Indian sweets (rasmalai, halwa, jalebi etc.) which are a bit of an acquired taste but crowd favorites!

I tried to sneak in some of my own South Indian heritage into the book where I could. I absolutely love dosa and I could eat it every single day, so that was one of my favorite things to include. I also love rose milk, which is just milk flavored with rose syrup. It’s pretty common in a lot of South Asian/Middle Eastern cultures but I rarely saw it depicted in American media so I wanted to make sure I mentioned it in the book!

Ashoka both partakes in and is devoid of some of our world’s societal problems. Notably, Kaleb faces discrimination as someone who is biracial. Why did you choose this societal issue to depict in Ashoka’s setting?

For me, writing Kaleb was less about the discrimination he faces and more about the way his relationship to his heritages evolves over the course of the series. I myself am not biracial but Kaleb’s character really stemmed from my own complicated feelings about identity growing up in a diaspora community. I was born in India, but I emigrated when I was six. And while my parents made sure I was raised with a lot of Indian culture and traditions, it’s inherently different experiencing those things outside of India. There were so many moments growing up when I felt too Indian in America, when I wished I could make myself less Indian to fit in. But at the same time, I felt too American whenever I returned to India, easily identified and called out as “foreign” because of my accent or the way I dressed.

Given the way I learned about and experienced Indian culture in my own childhood, it felt disingenuous to only write characters who felt entirely comfortable with their cultural identity. Kaleb was born from that desire to represent that element of my own lived experience.

Is there any side character in The Ivory Key you intend to explore in more detail in the sequel? If not, is there any character you wished you’d explored more?

I loved writing Surya and he’s definitely someone I’m very excited to explore more in the sequel! He’s a pretty minor character in book 1—he comes from a group of mercenaries who are responsible for the death of the former maharani as well as Vira’s betrothed, so he has a lot of answering to do for his involvement in those things!

Do you have any recommendations for fantasy, familial connections, or South-Asian-inspired novels?

One of my favorite fantasies of all time is the Witchlands series by Susan Dennard. She is such a master of worldbuilding, and those books were a huge source of inspiration for me as I worked on The Ivory Key. In terms of stories with South Asian settings, I’m a huge fan of Swati Teerdhala’s The Tiger At Midnight, Sarena and Sasha Nanua’s Sisters of the Snake, and Tasha Suri’s Empire of Sand. They all explore and showcase different aspects of South Asian culture, and I’ve absolutely loved getting to spend time in those worlds! 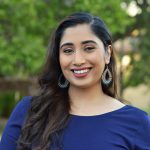 Akshaya Raman fell in love with writing when she wrote her first story at the age of ten. Though she graduated from UC Davis with a degree in biology, she gave up pursuing a career in science to write books. She is a co-founder and contributor to Writer’s Block Party, a group blog about writing and publishing, and has served on the planning teams of several book festivals. She lives in the Bay Area with an actual scaredy cat, and in her free time, she enjoys baking, traveling, and watching too much reality TV. You can find her on Instagram and Twitter @akshraman.

Previous Post: « Q&A With Echo Brown, The Chosen One
Next Post: Cover Reveal for Bessie the Motorcycle Queen by Charles R. Smith, illustrated by Charlot Kristensen »