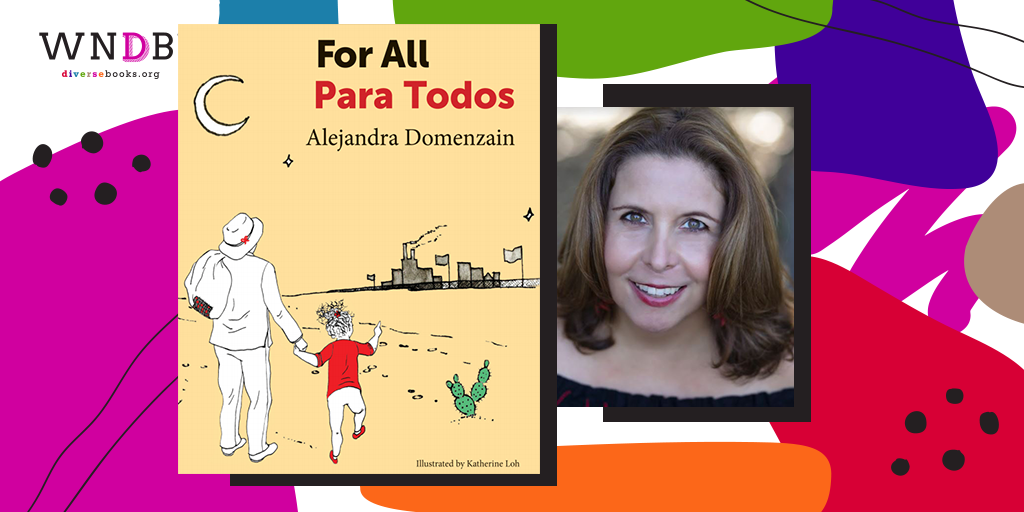 Today we’re pleased to welcome Alejandra Domenzain to the WNDB blog to discuss her picture book For All/Para Todos, illustrated by Katherine Loh, out April 5, 2021!

Flor and her dad make the dangerous journey from their poor country to a land called For All/Para Todos.

Dad works long hours picking fruit in the fields for little pay, and soon learns that immigrants are not welcome.

As Flor grows up, she learns that her story, like the story of so many migrants, needs to be told. She picks up her green pen and writes from the heart about her life, in this beautifully illustrated, bilingual children’s book written in musical rhyme. 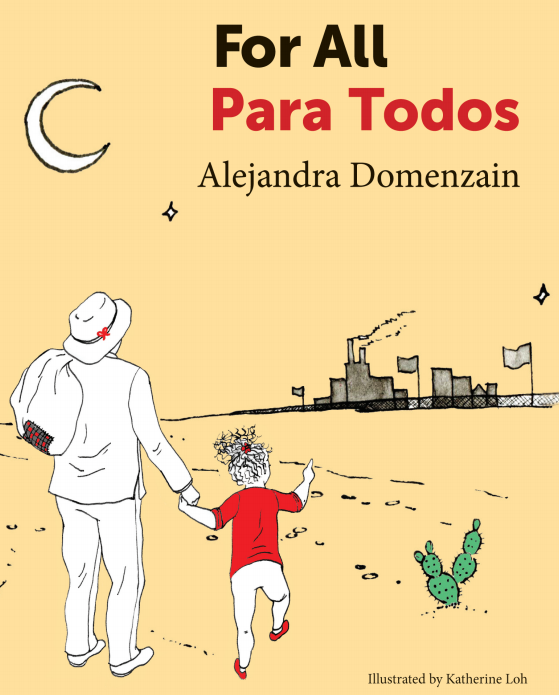 Tell us about the inspiration behind For All. Why did you want to write about the challenges facing immigrants, especially undocumented immigrants?

I’ve worked in the field of immigrant worker rights for over twenty years. I’ve seen up close the challenges faced by day laborers, domestic workers, janitors, garment workers, farmworkers, and others. Many employers take advantage of their situation to pay low wages and put them in unsafe and unhealthy situations. However, I’ve also seen these workers’ incredible strength, integrity, and courage and how they have organized and stood up for their rights.

Similarly, young people who were brought to this country as children live with so much uncertainty and limitations, and yet have formed one of the most powerful social movements of our time to push for immigration reform.

I wanted to portray the challenges, but also honor immigrants’ role as agents of change. I wanted to create a picture book that showed a young girl not just growing and finding her voice, but questioning unfair systems and taking steps to change them, not just for her, but for all immigrants.

I love that For All is a bilingual story. It feels so natural especially as we watch the protagonist, Flor, learn to feel comfortable in her new home. Why did you make this an intentionally bilingual book?

I wish the norm were multilingual books since 67 million Americans speak other languages! We are one of the few countries where most public elementary schools do not offer instruction in a second language, a vital resource in a multi-cultural society and globalized economy. In fact, many kids who come into school with other languages end up losing them.

For this book, in particular, it was important for it to reflect the two languages spoken by the characters and to make sure it was accessible in both. In the bigger picture, though, I think it’s interesting to re-frame the premise of the question: We could be asking authors who publish books in English only, “Why did you choose to limit the scope of your book?”

I learned Spanish first, then English in first grade, French when I was in middle school, and later as an adult learned Portuguese in college and speak it at home with my husband who is a Brazilian immigrant. Languages are not just a skill, they are a window into a culture and history, a way to connect with others, and a tool for different kinds of expression. I hope more and more of our children’s books celebrate, elevate, and represent as many languages as possible!

Why did you choose to have Flor’s Dad not tell her the entirety of the truth about their immigration status and how For All treats people, and have the injustices revealed to her in time?

Some young people grow up painfully aware of their immigration status, and some are protected from this devastating truth by their parents, only to find out when they run up against limitations—they can’t get a driver’s license, can’t travel, or leave the country, don’t have legal work authorization, can’t pay in-state tuition, and of course have no guarantee that they won’t be deported at any moment for any reason, often to a country they may not even remember, where they may not speak the language, and where it may not be safe.

I wanted to show various contrasts: between Flor’s sense of belonging and commitment to her new country and how she is treated as an outsider; between the admissions she has earned through her hard work and passing the test and the discrimination she experiences based on her immigration status; between her potential as someone who has so much to contribute (in her case she wants to go into the medical field and save lives) and the short-sighted way her promise is wasted; between her dad’s faith that all his sacrifices would be worth it and the realization that it was not enough.

For All is about the power of speaking up. What advice do you have for young people who want to speak up about issues in their communities?

I want them to know that speaking up is their right and responsibility, and they can look for ways to do it that feel right to them. I’ve found writing is a powerful tool, but you can speak through words, actions, art, even silence. There are things only you will say in your own unique way— so your voice is essential.

There are many organizations young people can be part of to speak up in a group, which can amplify their voice, lend protection, and often creates a powerful sense of community. Also, speaking out against injustice is patriotic—it means you care about the country living up to its ideals and are committed to doing the hard work of making things better, not just for you but for others and for the future.

As a bonus, when you find ways to speak up for things you believe in, it can be very healing and fulfilling, and it allows you to collaborate with people you respect and admire. Everyone that speaks up makes the path a little wider for those who come behind them.

What do you hope immigrant readers take away from this book?

I hope all readers are moved by the story and feel some mix of outrage at the realities immigrants face and also motivation to challenge the status quo. I hope they connect with the beauty of Flor’s spirit, the strength of her father’s love, the life-changing role of a teacher who cares, and the power of writing and activism. I also hope readers feel empowered, motivated, and accountable to make decisions that are consistent with their values and that are fair for everyone. I hope that they enjoy Katherine Loh’s gorgeous illustrations, which reflect the tenderness and respect we both have for the characters.

For immigrant readers, in particular, I hope they are inspired to write their own stories and take action in their own way. We need more books by immigrant activists!

What other books do you see For All as being in conversation with?

There are so many incredible books about the diversity of experiences among those that make up our country, and many, many breathtaking books about immigrants’ external and internal journeys. I am deeply grateful for all the authors who are expanding our understanding and giving us the gift of their truth, stories, and creativity.

There are also many important books about past activists, and great guides to support kids’ activism today. One of my favorite books about activism is Innosanto Nagara’s latest, Oh The Things We Are For, which makes a crucial contribution in focusing not on what activists are against, but what they are for—the love and vision guiding them.

These are some books that highlight activism around injustices faced by workers today in which undocumented workers have played an important role:

I hope there will be more and more children’s books about today’s workers’ rights movement because it’s incredibly vibrant and exciting. Also, most young people are going to be in the labor force, so it’s important to be prepared to stand up for their own rights and also make sure all workers are treated with dignity and fairness.

There are also some amazing books for teens about Dreamer activists, and hopefully, soon there will be more picture books too, written by Dreamers themselves.

I imagine in the near future we will have more books that capture the tragedy of family separations and detention of children at the border. I hope that some of those who have lived that experience are able to process and share it through writing so we can bear witness and do what it takes to put an end to it. For teens and young adults,  Land of the Cranes by Aida Salazar is a fictionalized, wrenching depiction of immigrant detention from a child’s point of view and We Are Not From Here by Jenny Torres Sanchez is a fictionalized, haunting story about three teens fleeing violence, facing tragic circumstances as they cross the border, and enduring detention.

One thing I’ve been reflecting on is the unique contribution of social justice books. The need for diversity in children’s books is becoming more and more understood. I would love to see a similar rallying cry around social justice books centering diverse people addressing unjust systems, institutions, cultural norms, policies, laws, etc. today and not just in the past. I think it’s not enough for diverse young people to see themselves reflected in books; I think they also need to see examples of how they can be agents of change today.

This is different from books that show characters showing courage, helping others, or being leaders without necessarily addressing the root causes of the problem. It means showing real or imagined contemporary diverse characters questioning, challenging, educating themselves and others, organizing, protesting, advocating, taking action. Maybe my perspective is skewed from having been an advocate for so long, but this is a normal thing that happens every day in countless ways—it’s not just for “heroes” or exceptional people. It’s also not just marching in the streets—it’s countless acts of service and commitment through a variety of channels that build up the alternatives we want to create.

Looking for ways to build just systems is what citizens do in a healthy democracy (“citizen” defined here as anyone who is part of our society). For some, it becomes a routine part of their life or even a career. Being civically engaged can take countless forms, draw on any talent or interest you have, can bring a deep sense of purpose, and is indispensable to re-imagining our world.

My hope is that one day, we won’t need to spend our energy fighting injustice, and instead, can spend it making our own unique contributions to thriving communities, coming up with wild dreams and then chasing them, using our energy to love, create, build, and evolve. 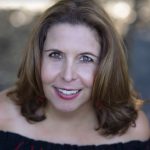 Alejandra Domenzain grew up in Mexico and the United States. She has been an advocate for immigrant workers for over 25 years, and also worked as an elementary school teacher. Currently, she is dedicated to improving workplace health and safety for low wage workers. Alejandra is using her green pen to write books that invite kids to question, dream, and stand up for justice.

Previous Post: « Cover Reveal for Caprice by Coe Booth
Next Post: Q&A With James Sie, All Kinds of Other »
Applications are open for Literary Agents of Chang